Ambedkar had argued that Dalits did not wish to be represented by others, much less nominated by them, and vehemently favoured separate electorates since it brought to the forefront of democratic practice the most oppressed. 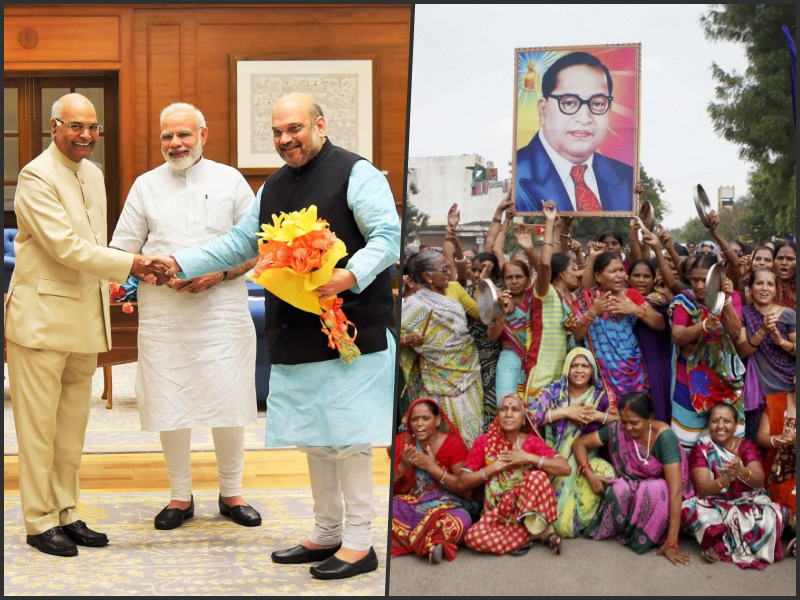 BJP’s reasoning with respect to the presidential election is brazenly instrumental – and a travesty of Ambedkar’s richly argued notion of democracy. Credit: Twitter/Amit Shah, PTI

The BJP’s presidential nominee, Ram Nath Kovind, has been the focus of public and media attention. But the question isn’t whether or not he is an appropriate choice; rather it has to do with the BJP’s audaciously opportune politics. After a momentous year that saw the death of Rohith Vemula, the Una incident, and much else by way of the party’s disdain for protesting Dalits and other democratic-minded citizens, the BJP’s choice of candidate is cruelly cynical. It is, however, not unusual, considering the manner in which the BJP endorsed the late A.P.J. Abdul Kalam’s candidature, and celebrated his ‘Muslim-ness’ in ways that effectively neutralised the Sangh parivar’s callous and founded disregard for Muslim lives and rights.

How may we hold the BJP to account in this instance? By probing its cynicism, not only on its own terms but also by inquiring into what makes such cynicism routine and acceptable – to the party’s adherents and others as well.

In this context, it is useful to recall how B.R. Ambedkar approached the question of the political representation of Dalits, and their persons and interests – in government, political society and the state.

Ambedkar favoured separate electorates fundamentally on this account: that it brought to the forefront of democratic practice the most oppressed, acting on their own, and in view of their long history of suffering, endurance and dignity. He granted that the ‘right to representation’ exercised by Dalits, required the abridgement of rights of those who imagined that they possessed ‘the right to represent’ all of India. But this has to be seen as extending rather than curtailing rights and liberties in a democracy.

It is evident that the BJP’s reasoning with respect to the presidential election is brazenly instrumental – and a travesty of Ambedkar’s richly argued notion of democracy.

Those of us in media and public life who have looked to reasons of ‘realpolitik’ (for instance, the issue of non-Jatav Dalits vs Jatav Dalits, and how this opposition plays into political choices in Uttar Pradesh and Bihar, rendering Kovind acceptable to a section of Dalits) too have fallen into this instrumental trap. That is, we are aware of the BJP’s cynicism, yet we need to account for it, and so we end up being tautological, affirming what needs to be interrogated. It is precisely for this reason that we need to recall Ambedkar’s expansive and democratic defence of the ‘right to representation’. For his utopian vision marks a horizon of possibility that ought not to be fudged or lost in the mess of what the here and now demands.

To engage with his radical utopianism requires us to come to terms with the range of concerns that have to do with Dalitness, Dalit rights and Dalit political representation – and sadly as secular, democratic citizens committed to an alternative and transformative politics, we are yet to do this systematically, and in earnest. In this context, I would like to shift our analysis from the moment at hand and undertake a small detour through recent history – to remind ourselves of what Dalits have achieved and what is required of the rest of us, especially by way of sustaining a shared democratic culture.

Dalits at the forefront of political movements

Dalits have been in the forefront of radical political movements, and have paid with their lives, in Bihar and Andhra Pradesh, to name two sites of radical Left assertion in recent decades. They have come into their own, through acts of political assertion and mobilisation in states as different as Tamil Nadu and Haryana. Yet we don’t have a sense of the political nuance that their presence and understanding have brought to either Left politics or democratic practice. Dalit assertion is both that and an expression of a universal will to justice and equality, but while we are somewhat alive to the first, even if reluctantly, we seldom grant such assertion its universal, world-historical character. Yet, it is evident from close studies of Dalit political lives that while anchored in local histories of struggle, change and movement, they embody a vision that is consequential for society as a whole, to its common democratic and radical life.

Consider in this context two important studies that have been published this last decade – George Kunnath’s work on Dalits in the radical Left in Bihar and Hugo Gorringe’s work on the Viduthalai Chiruthaigal Katchi (VCK) in Tamil Nadu.

Kunnath’s Rebels from the Mud Houses: Dalits and the Making of the Maoist Revolution in Bihar, features the life and times of Rajubhai, a Dalit activist with the militant Left in Bihar. Drawing on rich ethnographic work, centred on a landless Dalit household, Kunnath presents a layered picture of Dalit militants: neither passive victims of landlord and state violence nor obedient followers of armed Maoist insurgents. Rather, he points to how they consciously chose to join the Left, when it announced its presence in the region, and how equally consciously they withdrew their active support, when the party admitted Kurmi peasants – chief social oppressors of Dalits in the region – into its ranks, and coerced local communities into submitting to local party leaders that the activists were critical of.

Kunnath also suggests that once politicised by the Left, Dalits expanded their field of activism and vision. Thus, they engaged with the state to claim resources earmarked for their benefit, participated in struggles for social justice and were not averse to claiming local Dalit icons, associated with various cults and religious denominations as their own. Kunnath also notes that Dalits were both united and divided – they did come together as a class under Maoist leadership but this did not mean that divisions and hierarchy that marked relationships between Dalit castes went away in all instances. Likewise, they were not unwilling to make common cause with landless caste Hindu labourers, while remaining suspicious of their caste identities. Kunnath’s book is valuable as an account of Dalit political agency, and how it gestures towards a plural political universe. We see Dalit political and social actors pushing through given caste and class boundaries, even while they remained tied to them.

Gorringe has written two books on the VCK. His first book, Untouchable Citizens: Dalit Movements and Democratisation in Tamil Nadu, charted the rise of the VCK, initially as a political movement, and called attention to their remarkable success, while identifying potential faultlines – the movement’s stance on the gender question, for one, and its troubled relationship to different Dalit communities.

A second volume, Panthers in Parliament: Dalits, Caste and Political Power in South India, picks up that story in the second decade of the movement’s existence when it decided to enter mainstream politics, that is, contest elections. Gorringe draws on his detailed interviews with party cadre, supporters and intellectuals to point to all that awaits a political party of the marginalised, when it seeks to maximise its chances within an electoral democracy; and one that is as much about access to public goods and authority as it is about representative and just governance.

He is warm in his endorsement of the VCK’s efforts to deepen and broaden democratic practice, and critical of what such practice entails – coercive arbitration when it comes to settling local issues, to do with land or matters of access; the falling out with committed cadre, who are as concerned about social democracy, as they are with political success. In the event, he points to the limits that hedge our practice of political democracy, and which thwart and trouble militant Dalit actors, on the one hand, or push them towards populist politics on the other.

Commitment of Dalits to democracy

Kunnath and Gorringe both point to the incomplete nature of militant Left and democratic practices, such as they have evolved in the Indian context. The radical Left catalysed a powerful Dalit underclass politics into existence, but has itself remained vague and hesitant in theorising caste realities, both in social and intimate spaces and so Dalits, even when they understood the value of political comradeship, did not always find it easy to translate that into social fraternity in the widest sense of the term. In the Tamil context, in spite of the nearly 100-year-old Dravidian movement, which in its most radical phase was spiritedly against the hegemony of Brahmins and the inequalities of caste, Dalits have had to contend with caste Hindu rancour and violence – and their commitment to democracy has been severely tested by the un-democracy that sustains social and intimate lives, and by an electoral politics that is populist and corrupt.

Dalits in Bihar and Tamil Nadu have vigorously asserted their ‘right to representation’ and by that token demanded that democratic practice be transformed. Sadly, neither the radical Left nor social justice politics as they has evolved in states like Tamil Nadu have been able to take the full measure of Dalit democratic assertion.

The lessons that these examples hold for us are immense. Clearly, we cannot fulminate against the Hindu Right without at the same time engaging with the political plenitude that marks Dalit assertion. The annihilation of caste is a millenarian project and cannot be brought in at opportune moments. The BJP’s cynical ploy with respect to the presidential election represents the full measure of their politics, but meanwhile where is ours? We need to re-read Ambedkar, especially for what he tells us about the relationship between Dalit representation as he defines it and the future of democracy in India.

V. Geetha is a writer based in Chennai.