Affirmative action can only be one, albeit extremely crucial, link in a chain of policies that need to be designed to battle caste disadvantage. 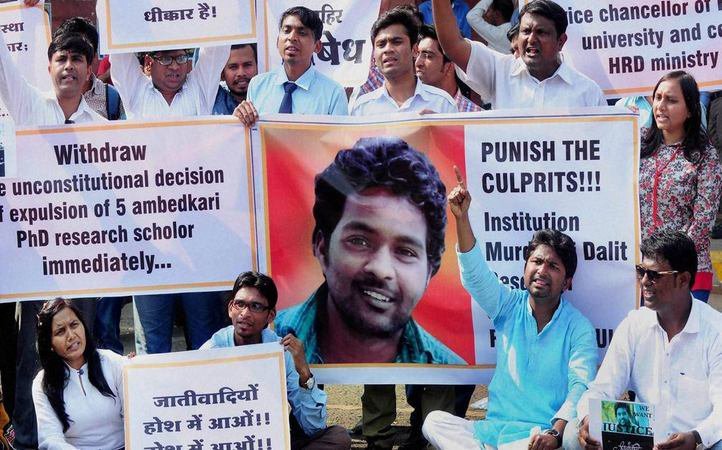 There are no significant differences in the effort and academic attitudes between ‘quota students’ and those who get into open seats. Credit: PTI

The reservation system in India, like affirmative action (AA) policies elsewhere in the world, is vilified for a variety of reasons. Critics of the reservation system have for long argued that the policy is unfair because it denies entry to eligible and meritorious candidates for prized positions. This is now complemented by a view, often held by those ostensibly supporting AA, that this policy is harmful to the beneficiaries because of two reasons. One, it sets beneficiaries up for failure due to potential ‘mismatch’, because they are granted entry into institutions and courses that they might not be equipped to handle. Two, it doubly stigmatises them; in addition to the stigma on account of their identity, it stamps them with a stigma of incompetence. Thus, the argument goes, AA ends up doing more harm than good.

The question of the added stigma of AA is hard to gauge, as low-ranked groups are often negatively stereotyped for a multiplicity of reasons, including being considered incompetent. Quota beneficiaries might often face hostility and discrimination inside institutions where they gain access. But the question is: would they be less stigmatised had they not been quota beneficiaries, and had instead chosen another trajectory of study or work?

Does stigma exist and is it internalised?

I conducted a study among undergraduate and postgraduate students at the University of Delhi that showed that despite being admitted with significant difference in entry scores, (scheduled caste students’ scores in entrance examinations being lower than those of the so-called upper-caste students), there are no significant differences in the effort and academic attitudes between ‘quota students’ and those who get in through open seats. However, stigmatising attitudes clearly exist, expressed through what social psychologists call ‘externalisation’ – the tendency of peers to judge the performance and efforts of students prejudicially, due to the widespread prevalence of discriminatory attitudes towards quota students. Also, although expressed in the context of AA, these attitudes can be seen as reflections of broader underlying social attitudes, rather than distinct or new attitudes that are born because of AA. However, in my study, Dalit students did not internalise these stigmatising attitudes, i.e., they didn’t share their upper caste peers’ view that they are intrinsically less capable.

Does stigma affect the uptake of AA?

Given that stigma exists (regardless of whether it is internalised), does it discourage eligible candidates from availing the benefits of quotas? There are no existing data sets or surveys that allow us to evaluate this question. Therefore, I did a primary survey in the city of Delhi, asking those who were eligible for reserved category seats, if they had used quotas, either for jobs or education, and if not, the reason behind it. I examined whether there was a difference in the use of quotas between Dalit or SC students, who belong to castes that are already highly stigmatised, and Other Backward Classes (OBCs), whose castes might be low-ranked but who have not suffered the stigma of untouchability. The study revealed several things. One, the use of educational quotas is higher than job quotas, because government jobs, where quotas are applicable, are very few and far between. Two, the fear of additional stigmatisation overall is a small part of the reason for the non-use of quotas. Also, this is a greater consideration for OBC students than Dalits, with between 9-16% of non-users citing that as a reason. The 9% are those who explicitly cite stigma as a reason, whereas the 16% additionally include those who reveal a desire to manage without government help – which may or may not reflect a fear of stigmatisation. Finally, and most importantly, red tape (asking students to run around from pillar to post, not giving information), bureaucratic difficulties (for instance, non-acceptance of caste certificates) and corruption (asking for direct bribes in exchange for reserved seats) are far more important than stigma as reasons accounting for the non-use of quotas. 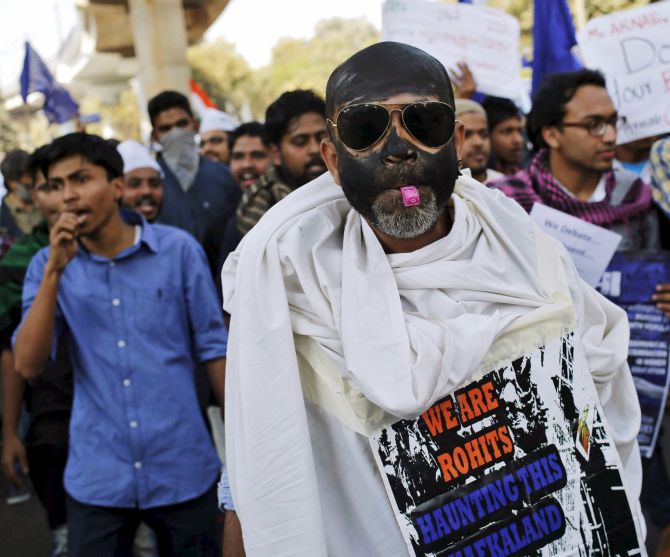 A demonstrator blows a whistle as others shout slogans during a protest march in solidarity for Rohi Vemula in New Delhi, India, February 23, 2016. Credit: Reuters

The reservation policy in India is a system of compensatory discrimination towards castes and communities that have been stigmatised and oppressed for centuries. The system is designed to counter exclusion that would come on account of prejudice, and allow entry to disadvantaged individuals to level the playing field in some spheres. However, due to Dalits’ ‘stigmatised ethnic identity’, which marks them with a stigma of incompetence, they are seen as unworthy recipients of a protective policy.

Affirmative action via quotas is a way of ensuring access to higher education and good jobs to those who would otherwise be excluded. However, quotas are only the starting point – the real challenge lies in how well beneficiaries are able to integrate within institutions into which they gain entry. Rohit Vemula’s tragic suicide in early 2016 has brought the issue of assimilation, alienation and discrimination within educational institutions to the fore.

The focus on ‘mismatch’ (which does not withstand rigorous academic scrutiny) keeps the spotlight on dropouts. We need to remember that several thousands, who get in on quotas, successfully graduate. I also conducted qualitative interviews with quota beneficiaries who successfully graduated. These conversations reveal, one, that even for the successful reserved category students, integration into colleges and university departments is not without challenges, but two, that success is possible, thus affirmative action is not a lost cause.

The running thread in my interviews with students is the repeated invocation of their caste by others, even in contexts where affirmative action is not applicable. Several respondents highlighted disadvantages due to their relatively weaker pre-college background in terms of quality schooling, lack of fluency in English, and lack of adequate academic support at home. Several accounts also pointed out discrimination in schools, and drew attention to a troubling tendency on the part of teachers and peers to actively thwart aspirations by discouraging lower-caste students from aiming high or pursuing their dreams. Several were told to just try for government jobs where they would get in easily on a quota rather than compete for private sector jobs, which the respondents found hurtful and insulting.

What else needs to be done?

Most of the interviewees were supportive of reservations and felt that they would not have been able to achieve what they did without it. This resonates with the findings of Bowen and Bok’s seminal study of the long-term consequences of affirmative action in the US. However, their accounts indicated that while reservations are necessary to open up windows of opportunity, they are not sufficient to ensure equality.

First and foremost, educational institutions need to establish a climate of mutual respect where bullying, derogatory remarks, and instances of open ostracism are discouraged and met with clear disapproval. Establishment of norms about what kind of behaviour is tolerated might be difficult and contentious, but not impossible, as we know from the progress of legislation on sexual harassment.

The anti-discriminatory legal provisions in India are patchy and need to be strengthened. The Scheduled Castes and the Scheduled Tribes (Prevention of Atrocities) Act (1989), (a modified version of the first anti-untouchability Act), was amended in December 2015. The amendment included new categories of actions to be treated as offences, including barring entry into an educational institution on account of caste, mainly targets caste-based hate crimes. Offences under this Act are treated as a criminal liability, which means that the burden of proof required is much larger than that for a civil liability, as, indeed, is the punishment, if guilt can be established.

However, the conviction rate under this Act is low: in 2013, it was 22.8%, with 84% cases pending in court. This low rate, in addition to reflecting inherent pro-elite and pro-upper caste biases in the system, reflects a critical difficulty in the use of this law: the aggrieved party has to be able to prove that the crime was committed because of their caste status and not because of any other motive. This is often impossible unless the offence was accompanied by open slurs that establish caste as the key reason for the perpetration of the crime. Also, conviction is only possible if a complaint has been filed under this act. Descriptive accounts suggest that even the filing of a complaint – the first step towards redressal and justice – is extremely daunting, especially for those already humiliated by atrocities, not to mention inordinate judicial delays, threats, and harassments, as the decks are stacked against them at all levels. Although this Act is extremely important, as it has the potential to deter violent hate crimes, there is need for a broader anti-discriminatory legal provision.

Focusing specifically on educational institutions, evidence suggests that the more challenging issue might be ‘micro-aggressions’. Micro-aggressions refer to everyday verbal, non-verbal and environmental slights, snubs or insults, intentional or unintentional, which communicate hostile, derogatory or negative messages to target persons based solely on their marginalised group membership.

These are difficult to tackle legally, as micro-aggressions often constitute acts that are, strictly speaking, not illegal. Also, as academic institutions are meant to uphold and accommodate discord, dissent and a diversity of views, it is difficult and indeed undesirable to muffle freedom of expression, unless there is open hate speech. This constitutes a huge challenge in terms of creating an atmosphere inside academic institutions that is based on mutual respect and does not stigmatise individuals on account of their group membership.

Thus, the multiplicity of challenges that Dalit students face indicates that affirmative action in the form of quotas is not a magic wand solution to the multi-faceted problem of discrimination, and can only be one – albeit extremely crucial – link in a chain of policies that need to be designed to battle caste disadvantage.

Ashwini Deshpande is professor of economics at Delhi School of Economics, University of Delhi, and can be reached at ashwini@econdse.org.