One Killed in Clashes at Bhima Koregaon Battle Anniversary Event in Pune; Situation Tense in Maharashtra

Thousands of Dalits had gathered at the war memorial when individuals with saffron flags allegedly torched vehicles and pelted stones. 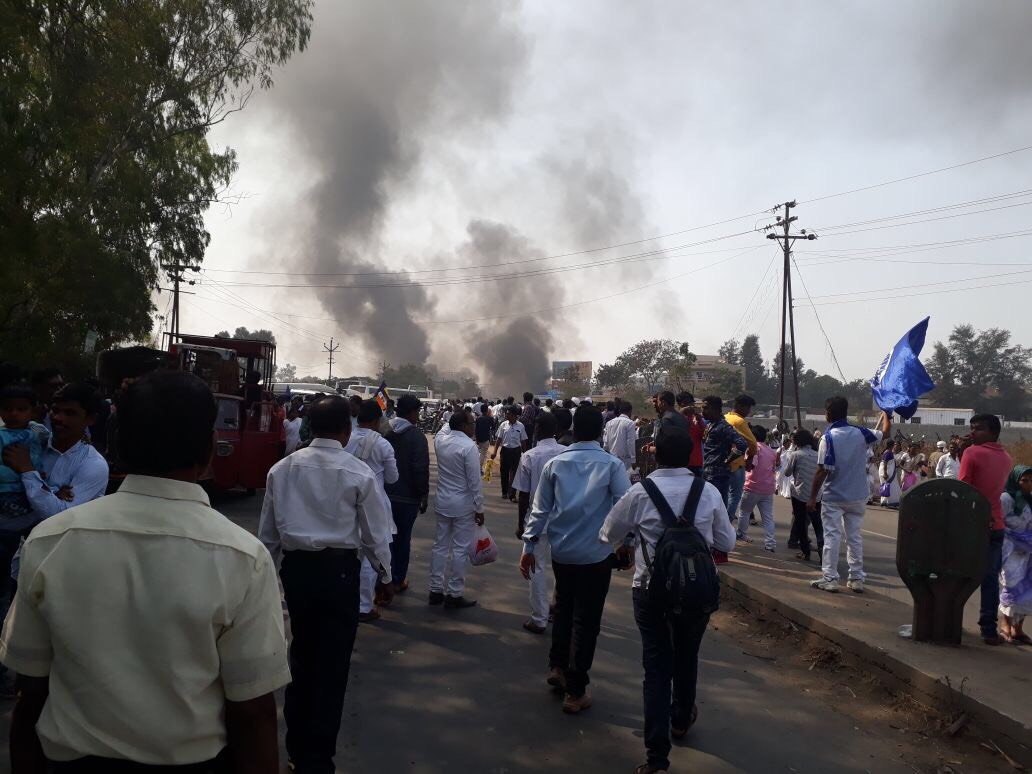 Pune: One person was killed and three others were injured during violence that broke out on Monday at Bhima Koregoan and surrounding villages near Pune in Maharashtra during celebrations to commemorate the 200th anniversary of the Battle of Koregoan.

Thousands of Dalits had gathered at the war memorial when individuals with saffron flags allegedly torched vehicles and pelted stones.

Twenty-eight-year-old Rahul Fatangale died in the violence and three were injured, according to the police. Police said that people from the nearby Vadhu Budruk village started pelting stones at the Dalits. Later in the day, clashes were also reported in the nearby villages of Sanaswadi, Shikrapur and Perne.

According to a police official, an incident on December 30 in Vadhu Budruk triggered the clashes. “A few upper caste Marathas from the village had vandalised tombs of Govind Ganapat Gaikwad, and Maratha king and son of Shivaji, Sambhaji Maharaj. Gaikwad, a Mahar, had defied the orders of Mughal king Aurangzeb and performed the last rites of Sambhaji after he was killed by Aurangzeb in 1689. As the Mughals had warned that whoever performs the last rites of Sambhaji will be killed, nobody from other communities came forward. But Gaikwad came forward against all odds. Later, he was killed by the Mughals. The village has tombs of both Sambhaji and Govinda Gaikwad and these tombs were vandalised.”

Many vehicles, including police vans, were burnt and damaged. Credit: Varsha Torgalkar

“The police lodged an FIR against 49 people from Vadhu Budruk under the SC/ST Prevention of Atrocities Act. Those 49 people conducted a rally in the village today against it. Vadhu Budruk is hardly three km away from Bhima Koregoan where Dalits were gathering from all across the state. These upper caste men started to pelt stones at unarmed Dalits who were going towards Bhima Koregoan to pay their tributes to the war memorial. They also burnt vehicles on the road. Shops had to be shut down and curfew was imposed,” the official added.

Sheetal Sathe of the Kabir Kala Manch who was at Bhima Koregoan said, “We were at Bhima Koregoan since morning and saw people carrying swords. Stones were being pelted at Dalits who had come to pay their tributes. Many vehicles, including police vans, were burnt and damaged. I had travelled through Wagholi, Vadhu Budruk and Bhima Koregoan and all shops were shut from morning till 4 pm. In the morning, there were not enough police, no fire brigade vehicles and no ambulances. The police arrived in the afternoon with fire brigades”. 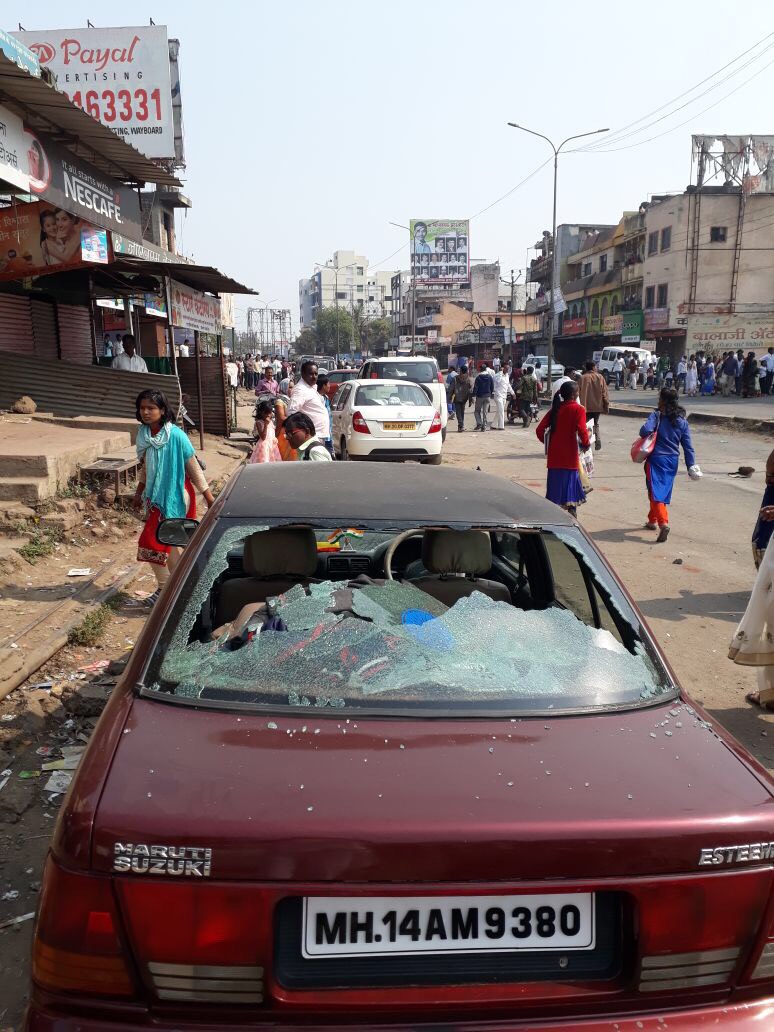 A vandalised vehicle at the spot of the violence. Credit: Varsha Torgalkar

Nitin Divekar, an IT professional from Mumbai, said, “First these people with saffron flags started to tease women standing on the road. Then they began pelting stones and shouting. They were damaging vehicles that had stickers of Jai Bhim or of Bhima Koregoan Shourya Gatha Divas. The police and the state central rapid force came only in the afternoon. It is surprising that the police did not deploy enough forces even though lakhs of people had gathered.”

Many Dalits posted live updates and videos of the situation on social media.

Ramesh Galande, police inspector, Shikrapur, said, “We are investigating the matter. Cases will be filed against those who took to violence. By evening, the situation was under control. Extra police forces were deployed. Two teams of the state reserve police force were also deployed.”

Rajendra Muthe, resident collector, Pune, issued a notice to impose IPC Section 144 to ban unlawful assembly of people with deadly weapons. He said, “Many social programs are being held at Bhima Koregoan that falls under Haveli and Shirur tehsil of Pune for Bhima Koregoan Shourya Gatha Diwas. We are imposing Section 144 based on reports received by the police. Even mobile companies are asked to shut networks till January 2, 2018.”

Meanwhile, chief minister Devendra Fadnavis told the media that the state government is keeping a watch on the situation and all those found guilty will be punished.

The situation in the state continues to remain tense today.

Incidents of stone pelting were reported in and around Aurangabad district. IPC Section 144 has been imposed in Aurangabad city and neighbouring rural regions. Several vehicles sporting panchsheel flags (Buddhist flags) and posters of Ambedkar and Buddha were reportedly attacked. According to the Aurangabad police, the situation is under control. “A few cases of stone pelting were reported in the morning. But these are minor cases. We were able to bring the situation under control immediately,” said an official at the control room.

Many families in Aurangabad’s Sidharth Nagar, Ramanagar, Osmanpur area have been eagerly waiting to establish contacts with their relatives who had traveled to Bhim Koregaon on January 1. “People travel in huge number from Aurangabad. We have not been able to contact a group of mostly elderly women from Ramanagar area,” said Subodh Wakekar, a law student and activist with Bhim Shakti Samajik Sanghatna.

Like Wakekar, several other young Dalit activists have been coordinating on social media to ensure people are able to reach home safely. Bhagyesha Khurane, a young law student from Pune has been at the forefront coordinating with different Buddha Viharas in and around Pune and making arrangements for the stranded to stay in. “We organised for over 500-600 persons to stay at Vagholi village near Pune last night. People have been sent back in batches,” Khurane said. These people had traveled in private buses and cars which were damaged yesterday by miscreants who came in huge number with saffron flags.

A call for “rasta roko” was given by a Dalit rights group in Mumbai. Traffic on eastern express highway was affected early Tuesday following protests at Deonar and Chembur area. Mumbai police has appealed to not post any unverified information on social media and avoid rumor mongering.

Don’t believe in rumours. Traffic on Eastern expressway was affected due to protests. It’s moving now. Traffic at Chembur Naka is still affected. There is nothing to panic. Verify facts with police officers and men before posting anything on social media.

(With inputs from Sukanya Shantha)