Murder of a Minstrel: Inside the Manganiyar Exodus

Despite being the only community to preserve Rajasthani traditions, the Manganiyars have lived with fear, exploitation and thwarted aspirations. 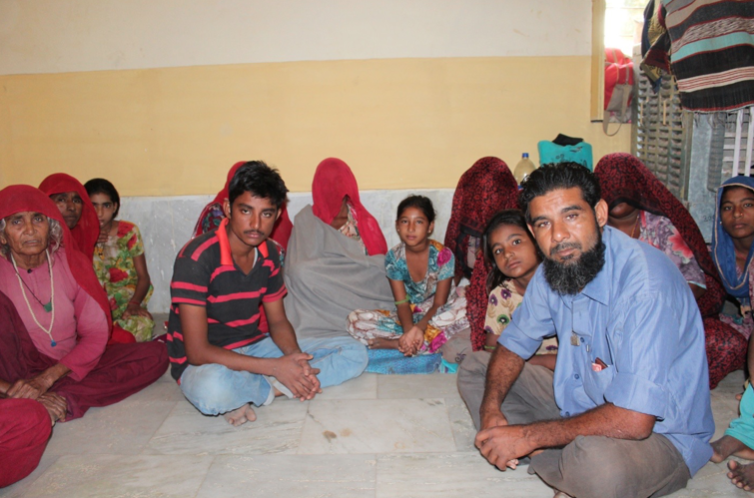 Family of Ahmad Khan at a rain-basera run by the Jaisalmer Nagar Parishad. Credit: The Wire/ Shruti Jain

Jaisalmer, Rajasthan: Forty families of the Manganiyar community arrived here from the village of Dantal, 120 kms away, after the murder of singer Ahmad Khan, allegedly by three upper-caste ‘faith healers’ who were not impressed by his performance at a Navratri program at the village temple on September 27.

The murder triggered the exodus of a community already exploited by local upper castes, land-owners and the government.

Change in relationship over time

The Manganiyars are a small Muslim community of hereditary professional singers who perform at nearly every local occasion. To keep Rajasthani art and culture alive, wealthy landlords and upper caste Hindu families have supported the Manganiyars for generations. Every Manganiyar is associated with a family in the village who gives them food and some money.

“Manganiyars, who mostly live in Jaisalmer and Barmer, used to marry as per Hindu traditions until a decade ago,” says Ajit Singh, a resident of Jaisalmer. “They even celebrate Holi and Diwali.”

However, with the passage of time, equations between the Manganiyars and the upper caste families have changed. There has been no significant increment in the amount they are paid for singing. Even the side work they do is held unaccountable and often adjusted with the food they are offered.

“We are totally dependent on the rich upper caste land owners (Jajmaan) in the village who decide what to pay us for our work. In fact, with the amount of money we earn, we can’t even cook for ourselves,” said Gewar Khan (52), a folk singer from Dantal village and son of Padma Shri Sakar Khan. “We hardly make Rs 1000 per month.”

The benefit of the BPL scheme for the Manganiyar community is restricted to seeking ration from the public distribution shops system. No other benefits – medical insurance, credit, housing and self-employment – reach the community.

“Almost every Manganiyar family in the village holds a BPL card but the benefits never reach us,” said Bilal (45), a community member from Dantal. In Rajasthan, charismatic personalities, by virtue of their heroic deeds, became popular among the masses and eventually turned into folk deities. They are believed to possess supernatural powers that heal the desperate through chosen faith healers called Bhupas/Ojhas/Godhlas in return of the sufferer’s faith – usually a financial offering.

The tradition of obeisance to these mythological heroes is still prevalent. Manganiyars sing in the praise of the Hindu deities on special days of the month which are considered appropriate to call the deities’ spirit. The faith healers offer liquor to the Manganiyars before their performance so that they keep singing for hours and do not demand more money.

“Singers are offered free liquor so that they don’t ask for money and never rise up, which has made them addicts. Now, they are ready to sing for free if liquor is offered. This has pushed them into poverty,” said Akbar Khan (78), who was once a traditional Alamkhana musician in the Rajput court.

Exploitation in the name of flourishing art 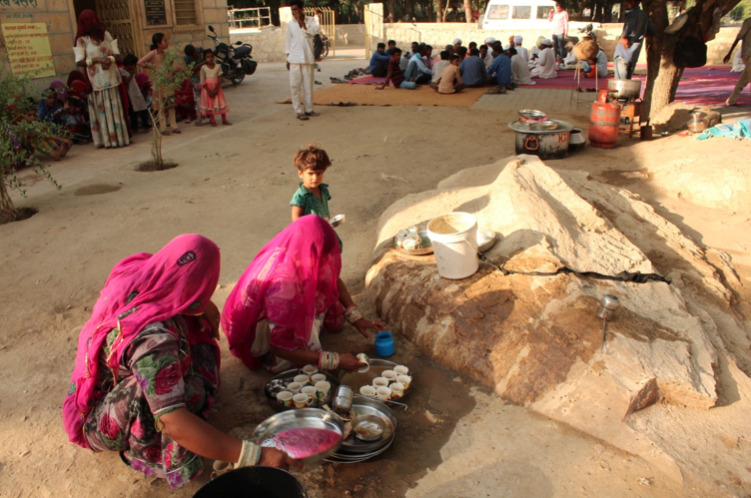 The emerging generation of Manganiyars is not interested in taking the art forward, even when lured with the idea of performing overseas.

“All my life, I’ve seen my elders singing for hours in return for a few rupees. Even those who get a chance to associate with the organisation that take us out for performances are paid so little,” said Shaukat (15), son of a folk singer currently studying in class 10 in Dantal.

“These organisations eat away our money. They carefully select only those artists who are uneducated and can’t be vocal about their demands,” added Khan.

“Not every singer gets the platform to perform at an international level; it works on contacts. The rate for each program is fixed by the government which varies from Rs 1,500 to Rs 2,000. They are also given scholarships to study but they usually don’t go for it,” said Nagardas Vaishnu, who is associated with the Rupayan Sansthan in Boronda village, Jodhpur, an institute that documents Rajasthani folk-lore, arts and music.

Housing for the denotified, nomadic and semi-nomadic tribes 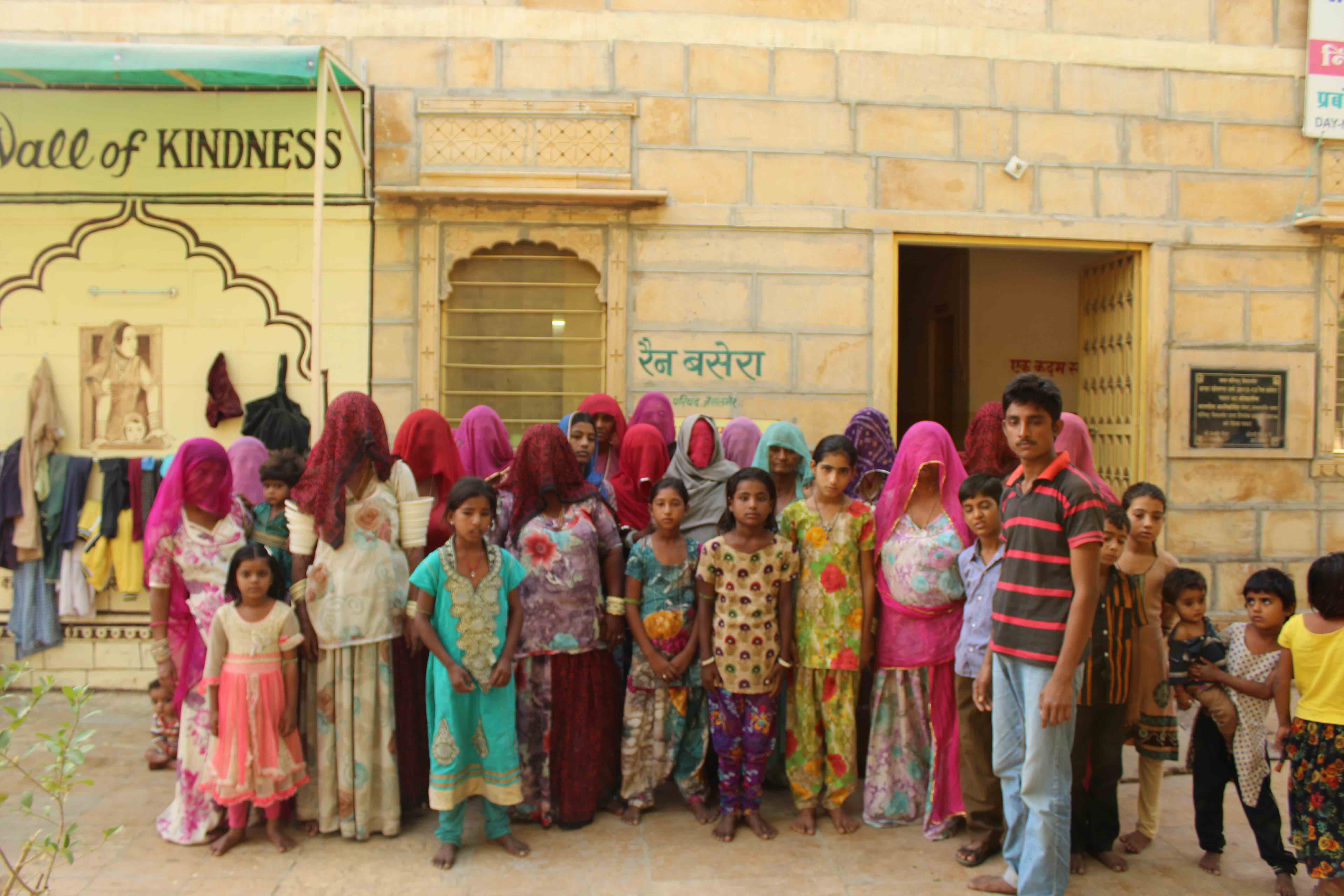 Women and children outside the rain-basera in Jaisalmer. Credit: The Wire/Shruti Jain

The Manganiyars are expecting allocation of 400 plots reserved by the Ashok Gehlot government in the denotified, nomadic and semi-nomadic tribe (DNT) category in Jaisalmer.

Only two plots out of the 400 DNT plots have been allocated so far. “Accommodation of the Managaniyars from Dantal in Jaisalmer should not be a problem for the administration,” said Tariq Khan, a resident of Jaisalmer.

However, the upper caste villagers have alleged that the Manganiyars have made similar demands in the past too.

“They sell the allocated plots every time and then demand for a new house. They are nomads; they can’t stay anywhere for long,” Khet Singh, whose daughter is the Dantal village Sarpanch told The Wire.

“The land we had in the village is not registered in our name. We don’t own any property,” said Chugge Khan (39), brother of the deceased singer. 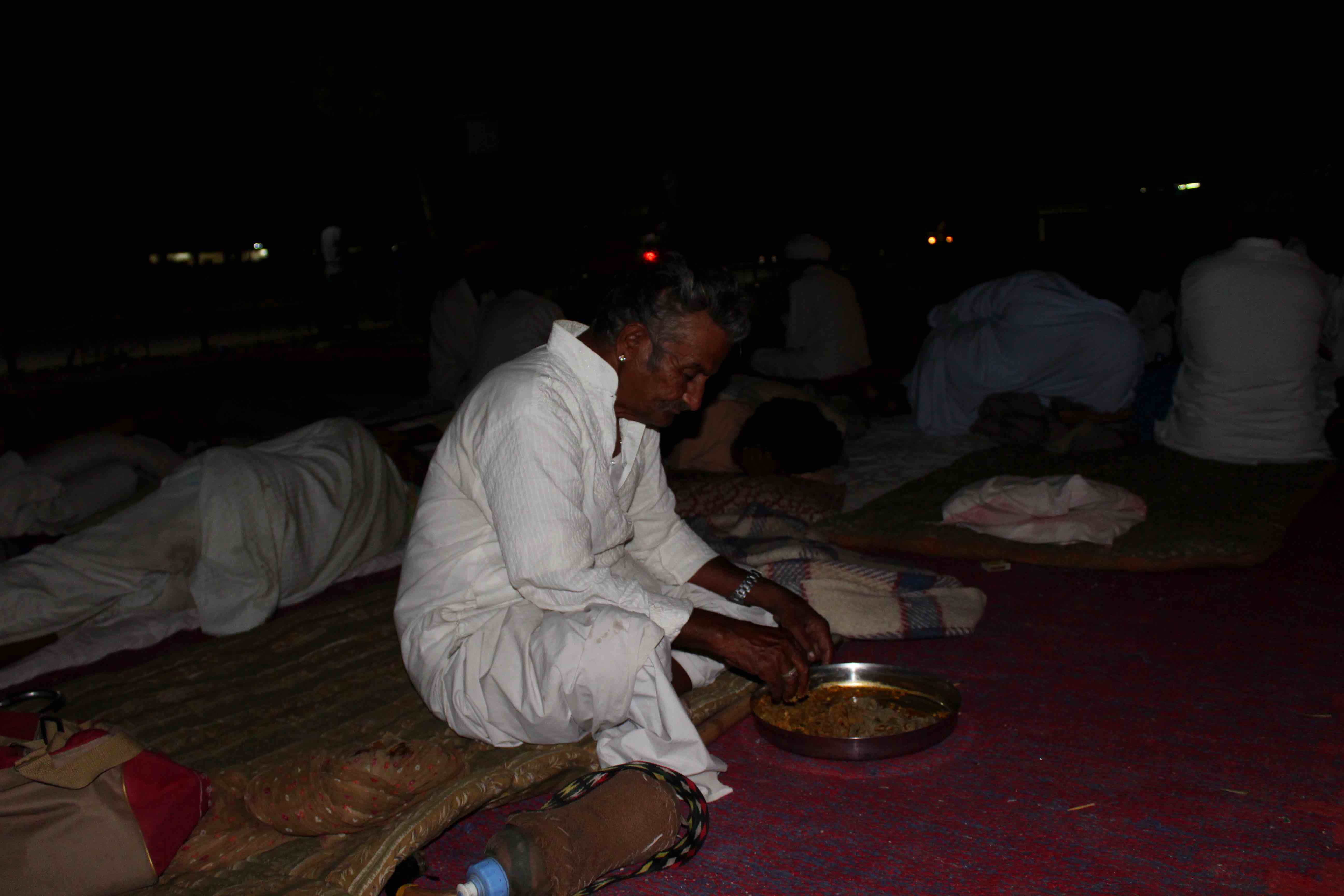 A Manganiyar having food at the shelter. Credit: The Wire/Shruti Jain

Events that led to the murder of Ahmad Khan

“If an innocent person like my bhai can be murdered, then it’s difficult to believe that our lives can be safe in Dantal,” said Samda (35), sister-in-law of Ahmad Khan.

On September 27, a jagran was organised by Bhupa, Ramesh Suthar in the Dantal village temple for which folk singer Ahmad Khan was called for Raag Parcha – music through which God’s spirit take possession of the faith healers.

“When he left home, he was neatly dressed in his favorite kurta and pajama. I never thought it was the last time I was seeing him. He was the sole breadwinner of our family,” Kaiku, wife of the deceased singer told The Wire.

That night, Ramesh Suthar and his brothers were heavily drunk and started screaming at Ahmad, telling  him he didn’t know how to sing.

“My brother got embarrassed and left the temple,” said Chugge Khan (39), on whose name the FIR against Suthar is registered.

“When he was hardly a few footsteps outside the house, Suthar and his brothers pushed him inside their Scorpio car and brought his dead body after an hour.”

The villagers have not denied that Suthar was behind Khan’s murder that night and after the incident, assured the family that justice would be done.

“We were convinced with the villagers had peacefully buried his body,” said Bariyam, Khan’s cousin. “But their behavior changed after that. They would not let us take water or call us for jagrans, forget talking about justice. When nothing happened after four days of Ahmad’s death, we decided to file an FIR.”

“The station house officer went to the village twice after Khan was murdered but the Manganiyar community refused to file any complaint and even buried his body. Four days after the murder, they came to the police station to get an FIR registered against Ramesh Suthar and his two siblings, Tararam and Shyamram. On October 4, Khan’s body was exhumed for post-mortem,” superintendent of police Gaurav Yadav told The Wire.

“Our village doesn’t support superstition that the Manganiyars are spreading. We have assured them that no one will threaten them if they return but it seems that they have something else in their minds,” said Khet Singh.

Demanding compensation of Rs 25 lakh for the family of the deceased singer and restoration of the Manganiyar community in the village, the People’s Union for Civil Liberties (PUCL), in a statement on Wednesday, said, “This murder is a part of increasing lawlessness in the state, related to brutal aggression by dominant castes and religion.”