The 25-foot wall which collapsed is understood to have been built by a caste Hindu so that he would not have to look at a Dalit colony. 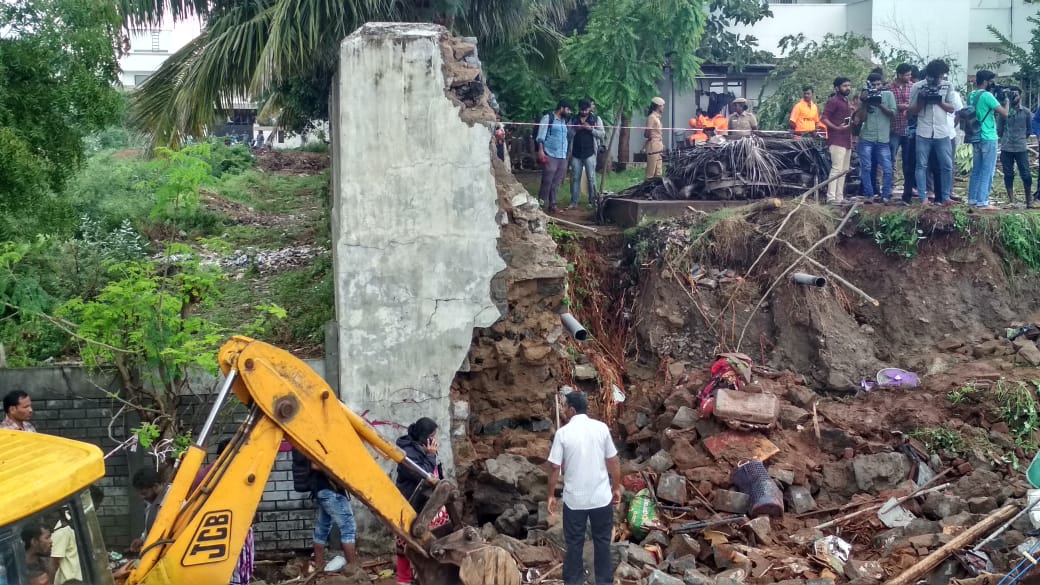 The site of the wall collapse at Mettupalayam in Tamil Nadu. Photo: Sujatha S.

Mettupalayam, Tamil Nadu: A wall that locals claim was built to separate Dalits collapsed early on Monday morning, killing 17 Dalits belonging to the Arunthathiar community of Nadur village in Mettupalayam.

Fifty-five-year-old Ramasamy says he will never forget what he saw early on Monday. At around 5 am, seeing murky water gushing out, he went around to check if there was any damage which was causing the flow. What he saw was bodies crushed under three houses entirely destroyed by the collapse of his neighbour’s massive 25-foot tall wall.

The wall was built behind a manor owned by a textile store owner. It fell due to incessant rains, on three houses at Kannapan Nagar.

“With help from neighbours, we started removing the dead bodies. All of them were daily wage labourers. Not even one could escape. All because of this wall which we have been complaining about for years,” says Ramasamy, voice constricted .

Beneath the debris that Ramasamy and others cleared, they found three children, three men and 11 women, from three families.

Kanappan Nagar, a colony in Nadur Village, Mettupalayam, has about 300 families belonging to the Arunthathiar community. They all live in tiled houses. The colony is built on a slopping plane, and on raised ground is the manor.

The house belongs to Sivasubramaniam who owns Chakravarthi Textiles, a famous retail store in Mettupalayam. Sivasubramaniam bought this plot eight years ago and while constructing this house, had raised the existing compound wall which was built using mud and was considered to be weak. 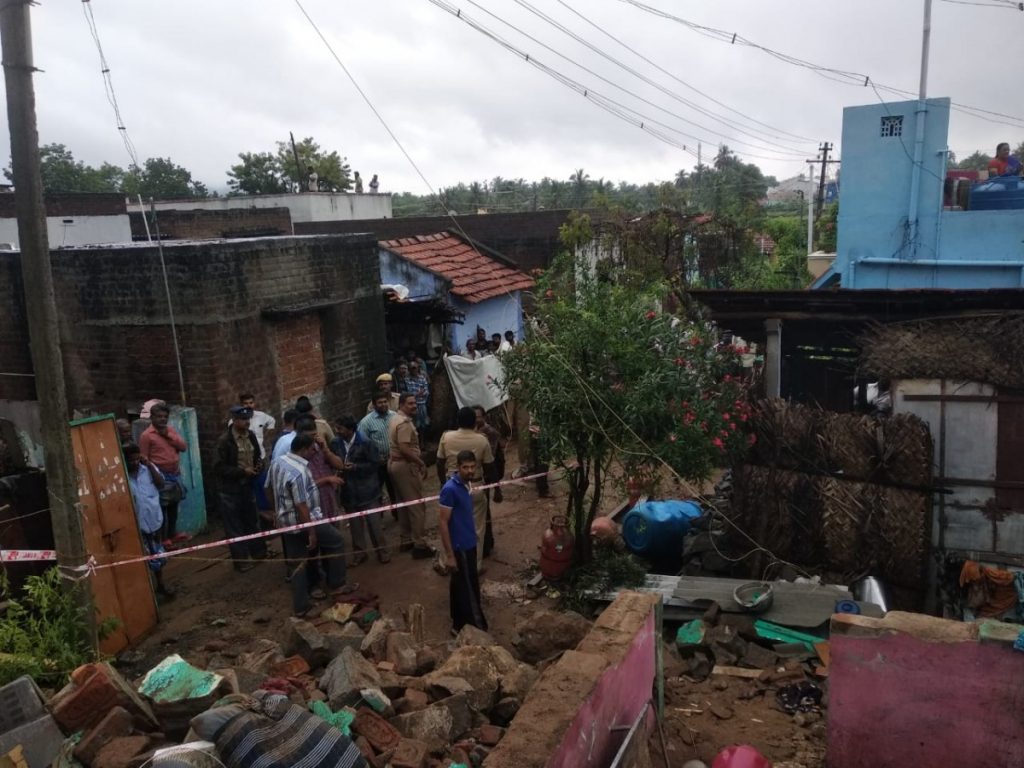 A view of Kanappan Nagar from the site of the wall collapse at Mettupalayam in Tamil Nadu. Photo: Sujatha S.

The compound wall was built of ‘karungal’ or basalt. Fearing for their safety, residents of Kannappan Nagar had raised objections and had also complained to authorities, all in vain.

Amidst all this is the inescapable fact that Sivasubramaniam constructed the wall so that he would not have to see a Dalit colony.

“The wall can be called ‘untouchability wall’ because the intention was only to avoid seeing us. We are Dalits and they are caste Hindus and rich, and did not even want to look at us. A few years earlier, a part of the previously built compound wall was partly destroyed and we complained about it. But unfortunately, when the current owner built this house he raised the wall and we couldn’t do anything about it. We had serious concerns of safety and we kept complaining to authorities and to the house owner, but all in vain,” questioned Arumugam, a resident of Kannappan Nagar.

Their humiliation did not end there. Drain water from the house was allowed to flow into Kannappan Nagar. Residents also allege that the owner would never come out to talk to them and would let the dogs bark at them when they came to complain.

Sivasubramaniam was remanded in judicial custody for 15 days but the concerns raised by various rights organisations on the sections of the laws he was convicted under remains unanswered. Sivasubramaniam was initially charged under Section 304 (a) and the Tamil Nadu Property (Prevention of Damage and Loss) Act, 1992.

“Whoever causes the death of any person by doing any rash or negligent act not amounting to culpable homicide shall be punished with imprisonment of either description for a term which may extend to two years, or with fine, or with both”.

Later his conviction was changed to 304 (ii) that deals with culpable homicide not amounting to murder.

The demand raised by various organisations is that Sivasubramaniam should be tried under SC and ST (Prevention of Atrocities) Act. Political parties and activists condemning the death are, however, divided on the opinion that the wall was an ‘untouchability wall’. The debris of the destroyed houses at Mettupalayam in Tamil Nadu. Photo: Sujatha S.

D. Ravikumar, of the Viduthalai Chiruthaigal Katchi political party, who raised the issue in Lok Sabha on Tuesday stated that though there is no clear cut definition for ‘wall of discrimination,’ the intent behind constructing such a high raised wall was indeed segregation.

Pandian feels that the wall may not be a physical evidence of untouchability but the intent is clear. “Even under Section 304 (a) under which Sivasubramaniam was booked, ‘negligence under what category’ is the question. Negligence because the people are Dalits? Action should be initiated taking into consideration the SC/ST Act in totality,” he says. 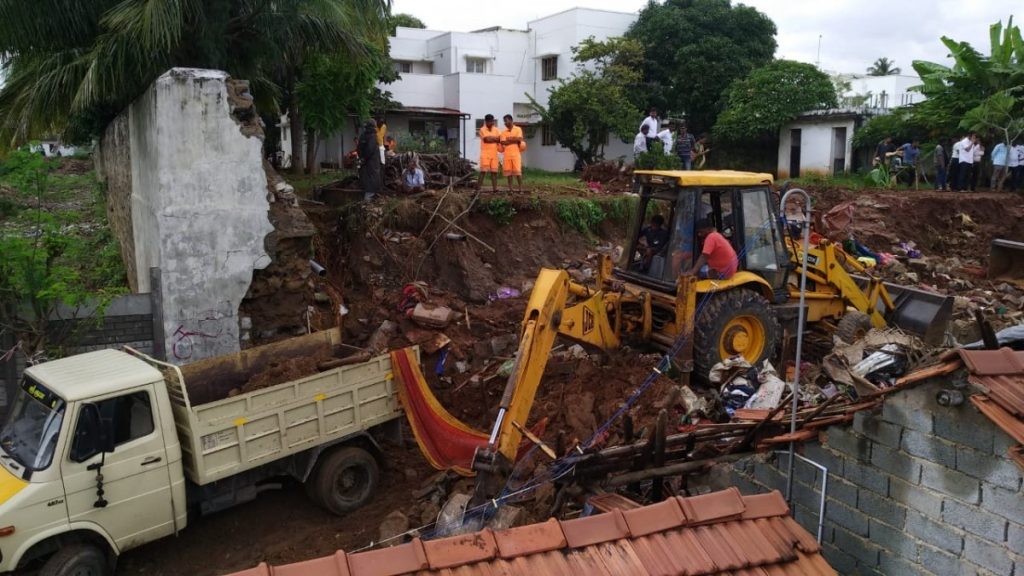 A vehicle clears the remains of the wall at Mettupalayam in Tamil Nadu. Photo: Sujatha S.

The National Commission for Scheduled Castes that visited Mettupalayam on Thursday, December 5,  to conduct an inquiry into the deaths has recommended invoking the SC/ST Act in the case to the state government.

L. Murugan, the Commission’s vice chairman, said, “The National Commission for Scheduled Castes headed by Ram Shankar Katheria visited Nadur village and conducted an inquiry. Based on our findings, the commission has recommended invoking  Sections 3-5 of the SC/ST Act to the state government. The commission has also recommended to provide additional compensation to the victims, that should be provided under the Act.”

The other side of the story is supplied by the residents of the co-operative colony where Sivasubramanian’s house is situated, who claim that there is no discrimination and that the wall was built only for “safety” purposes.

Besides all these allegations remain the fact that the authorities failed to take action when the residents of Kannapan Nagar complained about the wall. But according to a senior official in Mettupalayam Municipal Corporation, no permission was granted to build such a wall and building rules have been violated.

The remains of the wall were destroyed by revenue department officials based on an order from the district administration. 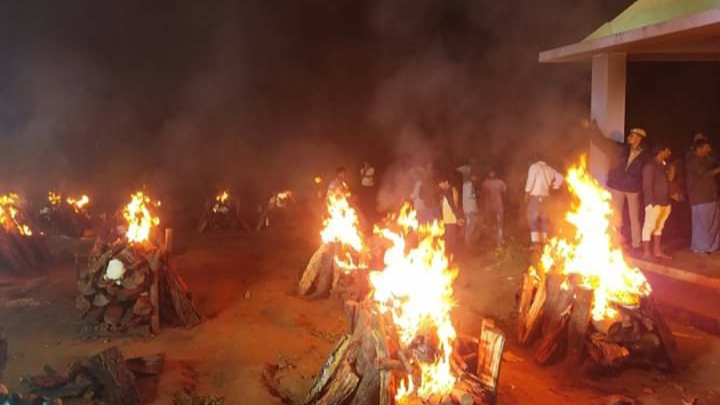 The pyres of some of the men, women and children killed in the Mettupalayam wall collapse. Photo: Sujatha S.

Sujatha S. is an independent journalist.