Contrary to the image created after the 2016 Maratha morcha that the community is anti-Dalit, many Maratha youths joined the Prakash Ambedkar-led rally.

Mumbai: The Maharashtra Police’s inability to arrest Shiv Pratishthan Hindustan chief Manohar Bhide, the prime suspect in the attacks unleashed on Dalits visiting Bhima Koregaon near Pune on January 1, led to a massive protest with over 50,000 Ambedkarites pouring into Mumbai’s Azad Maidan on March 26.

The protest organised by Prakash Ambedkar, the leader of Bharip Bahujan Mahasangh (BBM) – and supported by several smaller political and social organisations – saw an impressive turnout. The triangular 25-acre ground filled with protestors from across Maharashtra with several Muslim and Maratha organisations also joining the rally in large numbers.

Speaking at the rally, BBM leader Ambedkar said he and his supporters had decided to give the police time until March 26 to arrest Bhide. “After that, we would march to the Vidhan Bhawan. Our target this time would not be just the chief minister (Devendra Fadnavis) and the police, but also Narendra Modi,” he announced.

Ambedkar had earlier called for a protest rally from Byculla to Azad Maidan in south Mumbai – a five-kilometre stretch – during the busy morning hours. However, the permission was denied and the protestors were asked to gather at Azad Maidan (a ground where most protests in Mumbai are organised) instead.

Ambedkar, who has been at the forefront of the protest right from the start, was the first one to name Bhide and Samasta Hindu Aghadi chief Milind Ekbote. While Bhide is believed to be close to the right-wing Rashtriya Swayamsevak Sangh (RSS), Ekbote is a former three-term Bharatiya Janata Party (BJP) corporator in Pune. 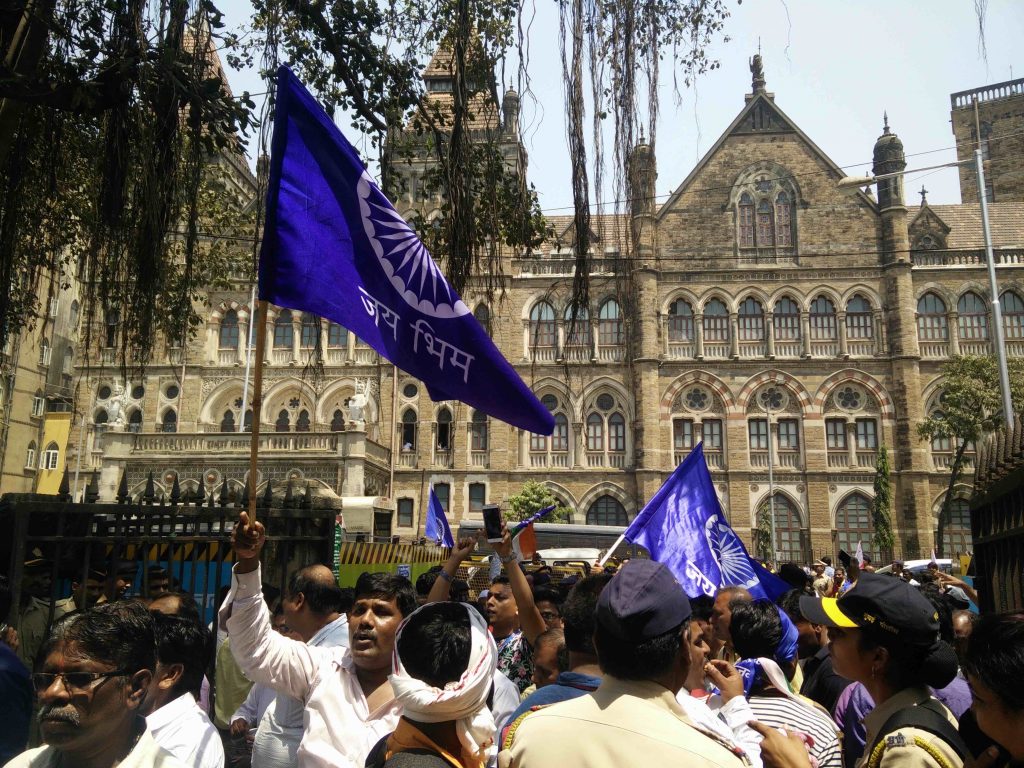 They have been named as the prime instigators of the violence that left scores of visitors of Bhima Koregaon injured and one dead. Ambedkar has been accusing the duo, both Brahmins and Hindutva leaders, of conspiracy and meticulously planning the attack days in advance. This year was the 200th anniversary of the Battle of Bhima Koregaon in which the Mahar community fought together with the British to end of Brahmin Peshwa regime in the state.

The anniversary event saw a large turnout. But most of them were attacked and their vehicles were burnt. The attack led to an impromptu shut down of Maharashtra. Instead of arresting those involved in the violence, the police instead focussed on those participating in the bandh, and over 20,000 people were booked including several children.

Although on March 13, the state chief minister Fadnavis had announced on the floor of the assembly that the cases registered against the agitators across Maharashtra would be withdrawn, Ambedkar said it was only a false promise. “It was just an announcement. It has been two weeks since the CM announced to withdraw those cases, but it has not happened so far.”

The state police have also been dragging its feet in the investigation against the perpetrators of the Bhima Koregaon violence. Only after the apex court rejected Ekbote’s anticipatory bail on March 14 did the police arrest him in Pune. He has been in judicial custody ever since. 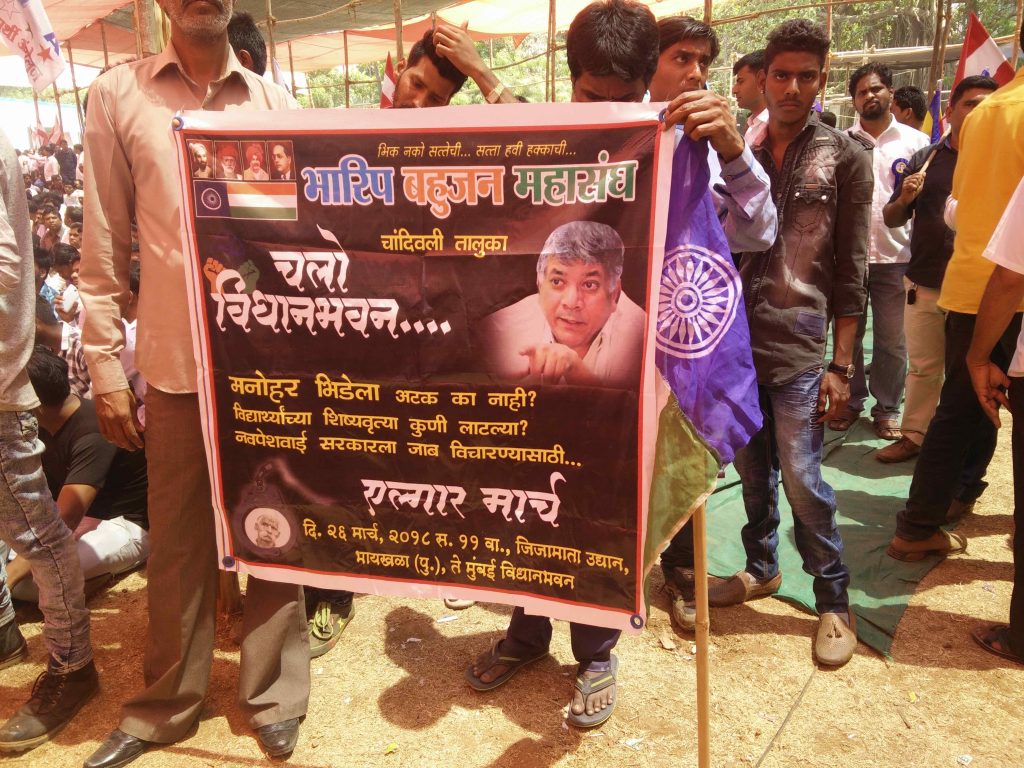 Bhide, who is popularly known as “Bhide Guruji”, holds a strong clout in western Maharashtra, especially in Sangli, Satara and Kolhapur district. He has been actively involved in mobilising youths in this region under the banner of Shiv Pratishthan Hindustan and reinforcing “Hindutva values” in them.

Bhide acquired the name Sambhaji, after Shivaji Maharaj’s son, and has had several cases of violence registered against him. The most recent being in his hometown Sangli when a Ganesh pandal was denied permission to put up an artiste’s impression of the assassination of Adil Shah’s army commander Afjal Khan by Shivaji Maharaj. He also led an agitation against the release of the film Jodhaa Akbar in 2008. Ekbote, on the other hand, has 12 cases against him of rioting, trespassing, criminal intimidation and attempts to spread enmity between two communities. He has already been convicted in five.

Contrary to the image created after the Maratha morcha (rally) in 2016, that the Maratha community is anti-Dalit, many Maratha youths joined the rally yesterday in large numbers. Sharing the stage with Ambedkar was Maratha Seva Sangh’s leader and author Shrimant Kokate. Several other youth leaders from Pune and Satara also participated.

“It is crucial to identify who is the main enemy. Efforts have been made both by the Brahminical forces and the media to pit the two communities against each other. We realised this is a right opportunity to forge a unity with Ambedkarite forces and present it before the public and hence participated in the rally,” said Somnath Uttam Godse, a history lecturer in a college in Lonavala.

Godse, who is also an active leader of a radical Maratha organisation Sambhaji Brigade further added that Bhide and his men have been brainwashing the Maratha youth in the state for over two decades. “For nearly two decades Bhide has been instigating Marathas against Muslims and Dalits. Instead of mobilising their own (Brahmins) people, they target our youth and use them in dividing the society,” Godse said. 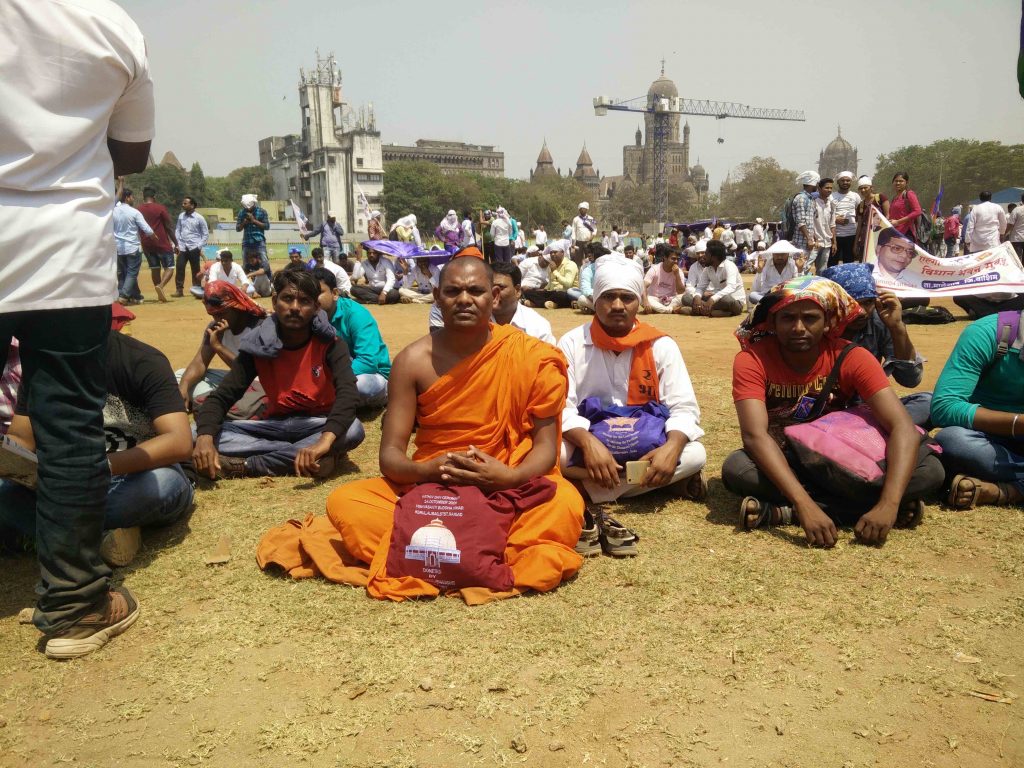 While the violence at Bhima Koregaon was the tipping point for the Azad Maidan rally, many who had gathered also presented issues affecting them on the local level. Raziya Kapdewala, a single mother from Jalgaon, participated in the rally with the hope that her pension problem would be addressed here. “My husband died nearly a decade ago and ever since I have been struggling to get the monthly pension. Only recently I got in touch with Bharip workers in my city who have helped me in my case,” Kapdewala said.

Other issues included the recent judgement by the Supreme Court where it observed that the Act which protects Scheduled Castes and Scheduled Tribes was being “misused” and issued guidelines to protect public servants and private employees from arrests under it. BBM leader Ambedkar termed the court’s judgement on the SC/ST Atrocities Act ‘unfortunate’ and demanded that the government seek a review by a larger bench of the apex court.

The issues of Dalit, Adivasi and OBC students from Tata Institute of Social Sciences were also included in the charter of demands. The students have been agitating against the TISS administration for withdrawing the financial aid earlier provided to them.