UP: In Village Near Kanpur, Thakur Mob Attacks and Injures Dalits

A day after the two groups clashed during a Bhim Shobha Yatra, the Thakurs conducted a planned attack on two Dalit localities, victims say.

Some of the people injured during the attack in Mangta village. Photo: Ismat Ara

Kanpur Dehat, UP: On February 13, Kusuma Devi, a middle-aged housewife from Mangta village in Uttar Pradesh’s Kanpur was in the kitchen with her 16-year-old daughter when she heard loud noises outside. She immediately said to her daughter, “Ye Thakur log hain, chal chup jaa (Those are Thakurs, go and hide).” Kusuma belongs to the Dalit community in the village. Before they could do anything, a group of men ruthlessly entered the house and started beating them up.

As of Sunday, Kusuma Devi is one of 18 people from her community who have been admitted to the Ursula Hospital in Kanpur town, after they were allegedly attacked by members of the Thakur community. Most of the victims of the attack are women.

Kusuma Devi has severe head injuries. “Mujhey sar me nau taanke aaye hain aur baayan haath bhi tut gaya hai. Unn logon ne ghar me ghus ke laathi aur kulhadi se mujhey aur meri beti dono ko bahut maara,” she says. “I have got nine stitches on my head and my left hand is also broken. They broke into the house and beat me and my daughter with lathis and kulhaadis (hammer).” She added, “While we were being beaten up, the police were just making videos.”

Anurag Vats, the SSP of Kanpur Dehat, however, said that the police were making videos so that they could “use them as evidence” in the future. He said, “Since the initial response team comprised only of three people, the police was helpless in the face of such a huge crowd. The backup team took 10-15 minutes to reach the place. The initial team took videos so they can later be used as evidence.” He also said that the police has, so far, made 13 arrests in the case based on the same videos.

Kusuma Devi further said, “They came at such a time when all the men of the village had gone for work. They planned it in a way to attack the women and children.” According to Devi, close to 300 people attacked the Dalit community. 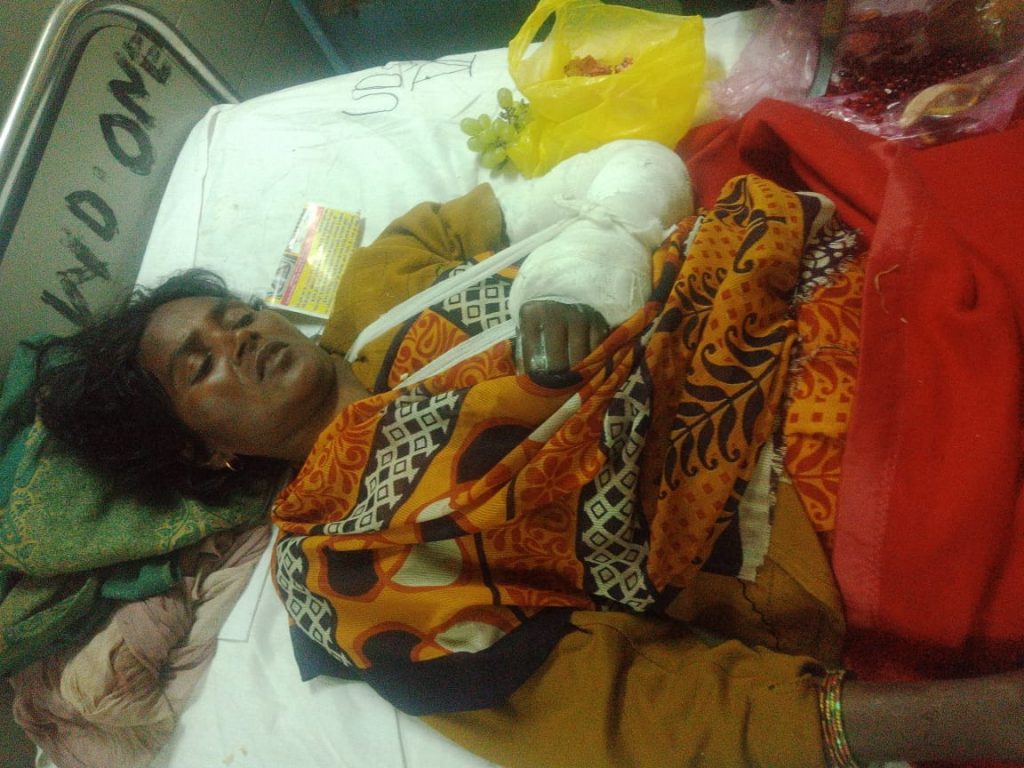 Guddi Devi, who has suffered injuries on her left hand and was advised bed rest for 2 months. She asks, “Who will cook food at home now?”. Photo: Ismat Ara

Tensions in the village had been building up for over ten days. According to Amit Kumar, the reason for this violence can be traced back to a week-long event called “Bhim Katha” that he had organised in the village starting February 1. He explained, “We had conducted an event, a Bhim Katha in the village for the first time to celebrate the teachings of Gautam Buddha and Babasaheb Ambedkar. Various programmes such as theatre, singing and narration were going on. The Thakur community of our village didn’t like that we were having an event just by ourselves. They started provoking us.”

According to him, on the fourth day of the programme, there was a wedding at the house of Jaideep Singh, a Thakur. A group from their household was sent to the venue of the Bhim Katha, a “mohalla ground”, to ask the organisers to stop the programme for 3-4 hours. “We could not stop the event just like that because about 500 people had come from 2-3 villages. They were all invested. So we didn’t stop. I think that is what irked them,” Amit said.

Nothing transpired for the next few days. On February 12, a Bhim Shobha Yatra was held by the Dalits, during which a poster of B.R. Ambedkar was damaged by the Thakurs. According to people, it was a teenage boy who tore the poster.

A melee ensued and stones were pelted by both sides, in which about six persons were injured.

The next day, on February 13, hundreds of people could be heard chanting “Jai Shri Ram” in the village, locals said. “They (the Thakurs) had come for us, not less than 500 people,” Amit said.

Shiv Devi, a 50-year-old woman, was preparing chapatis when she heard the chants. Immediately, she went out to see what was happening. “When I came out, I saw people everywhere. I thought I’ll run back into the house, but about ten men had caught me by then. They started beating me up. Lambi lambi lathiyon pe kulhaadiyan baandh rakhe the unhone (To the ends of long lathis, they had tied hammers),” she says.

“They were pulling out people from their houses and beating them up too,” she adds. For the past three days, Shiv Devi has been in Ursula Hospital in Kanpur town. She has received five stitches to her head.

Women were not the only victims of the attack. Some children were also beaten up.

Adarsh Kumar, a five-year-old child, is one of the victims of the violence and is currently in Ursula Hospital. He greets The Wire‘s reporter with an enthusiastic, “Jai Bhim!” When asked who beat him up, he said, “Raja”, meaning Rajputs, referring to upper caste members. Adarsh has suffered a fracture in one of his bones in his left hand. 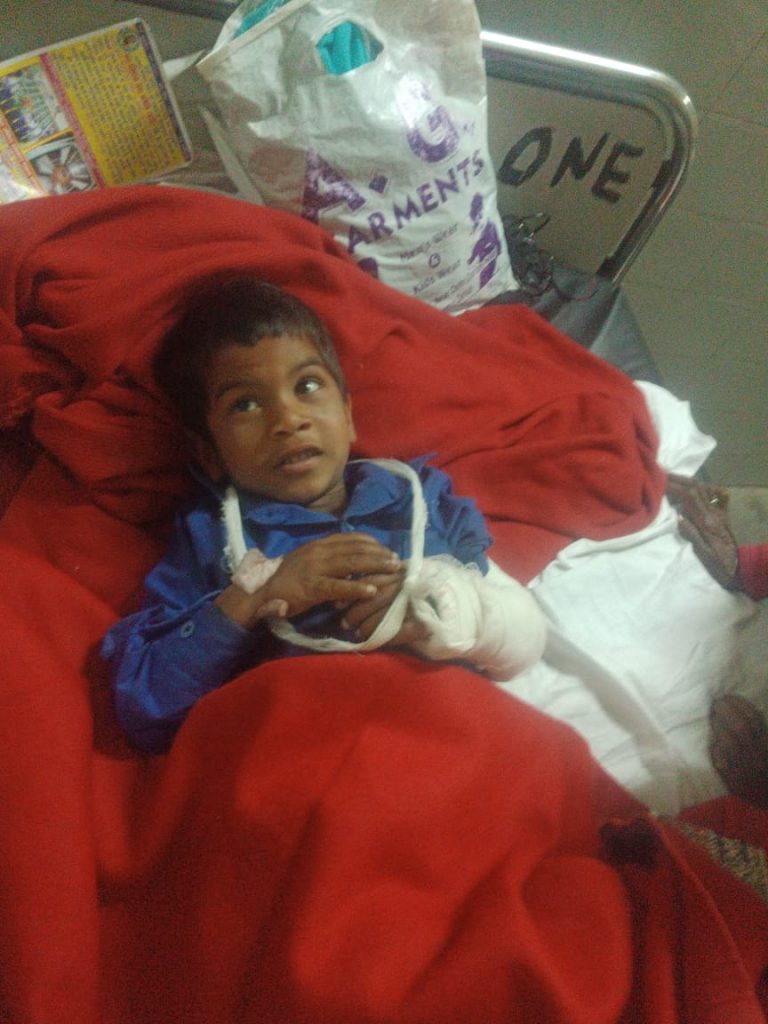 His father, Mahesh Kumar, a daily wage worker, said, “The Thakurs attacked us because they didn’t like the fact that we were having our own event. It wasn’t like their Ramleela celebrations, it was about the contribution of Babasaheb Ambedkar to our community’s awakening.”

“They have deliberately targeted women, because they think women are easy targets and injuring women from our community will hurt us most,” he added. Mahesh has sought help from other people in the village to afford his son’s treatment. Out of the 18 people admitted to hospital, just three are men.

Bhure Lal, a resident of Mangta village who was in the hospital on Sunday, described the severity of the attack. “Many people have received serious injuries. Some who were admitted earlier have left, but most are still in the hospital because of the nature of their injuries. Three women – Rashmi, Beenas and Bhagwati – are in the emergency ward because they have received over 15 stitches to their heads.”

The Thakurs appeared nonplussed about the attack and defended their actions. Suresh Singh, the husband of the village’s former pradhan said, “Ek 14 saal ke nasamjh bachche ne wo poster phaad dia tha. Usi wajah se saara vivaad ho gaya. (A goofy 14-year-old had torn their poster. That is the cause of all the conflict).” He claimed that the Thakurs had promised to put up three news posters but that the Dalits “were still angry and refused to listen”.

Chandu Singh, another Thakur from the village, explained that “some very bad things were said of savarna people” during the yatra. “They said things like, ‘Na koi Ramanaya ka noi Purana, Iss desh ko chala raha hai keval Ambedkar ka samvidhan. (Not Ramayana or Puranas, the only thing running this country is Ambedkar’s constitution)’,” he said, though he did not explain how this was insulting to savarna people.

“They also accused us of taking a bath with our mother,” Singh claimed, referring to the custom of Ganga snaan. Chandu Singh also claimed that during the yatra, slogans like ‘Thakur Murdabad’ were raised. “We still haven’t retaliated,” Singh said, threatening the prospect of further violence. He later added that the Thakurs are now “ready to compromise”.

Brijlal Khabri, a Dalit leader who visited the village on Friday, said that the conflict had nothing to do with the wedding at the Thakur’s house. “The wedding was happening two kilometres away from the venue of the Bhim Katha. This fight is simply about ideology. The upper castes simply don’t want us to spread Babasaheb’s word because it threatens their dominance,” he said.

Pradeep Narwal, the national coordinator of the Scheduled Caste cell of the UP Congress, visited the victims in the hospital on February 14. He said, “Two Dalit mohallas, which are roughly one kilometre apart, were attacked simultaneously. This proves that it was a well-planned attack. Ek bees saal ki ladki jiski agle mahine shadi hone waali thi, usko kulhadi se sar pe maara gaya (One girl, who was 20-years-old, was attacked with a sharp object. She was to get married in the next month).”

Narwal said the attack has left the Dalits in the village fearing for their safety. “When I visited, they were asking me if I could help them get gun licenses. They don’t trust the upper castes and they don’t trust the police,” he said.

Amit Kumar, the organiser of the Bhim Katha, said he has been pelted with stones many times since the event. He told The Wire, “Because of the fear, people have stopped coming out of their house unless it’s absolutely necessary. I am getting threatened every single day. There is a possibility of me being killed,” he said. Kumar said that one cannot register their dissent by beating women and children. Kumar also stated that the Thakurs had set a house on fire, but that nobody was injured. 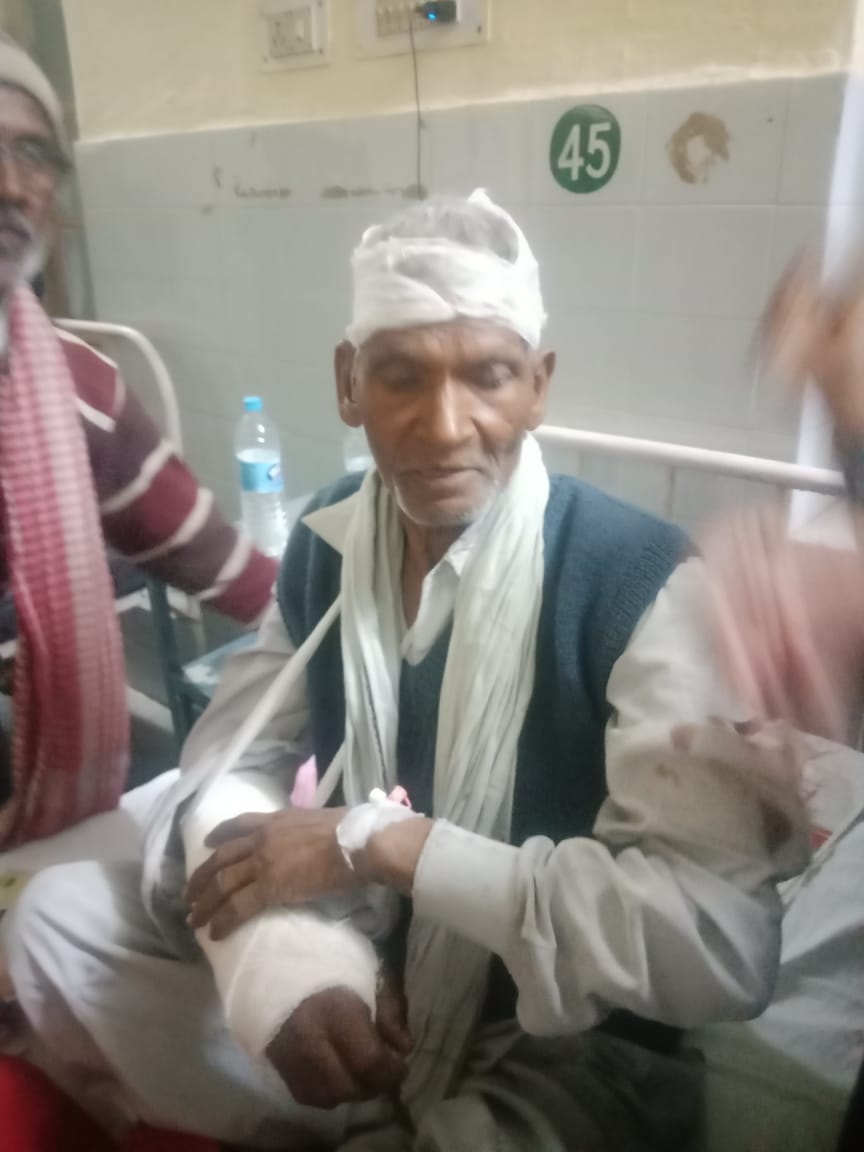 Manphul Prashad has suffered head injuries and his right hand is broken. A daily wage earner, he will have to give up work for 2-3 months. Photo: Ismat Ara

No reason to fear, say police

Police officer Anurag Vats said there is no need for anybody to fear, adding that close to 70 officers have been deployed in the area. He told The Wire, “The people here will tell you that the police has been extremely supportive. We registered the FIR based on the complaint filed by the Dalits. All those who have been arrested are people from the upper castes.” According to Vats, more arrests are bound to happen.

He added, “Women from both the communities recently met and reached a compromise. They have accepted that they want to live together. We are also trying for the same thing, to facilitate a dialogue between the two communities.”

An FIR was filed on the evening of the attack, with charges invoked under 12 sections of the Indian Penal Code. These include charges of rioting, rioting armed with deadly weapons, unlawful assembly, house trespassing. Some sections of the Scheduled Caste and Scheduled Tribe (Prevention of Atrocities) Act have also been invoked. All the 13 accused mentioned in the FIR are from the Thakur caste.