In a political career spanning 65 years, Mangoo Ram made remarkable contributions. Most notably, he was a member of the Ghadar Party and shaped the Ad-Dharm movement in Punjab. 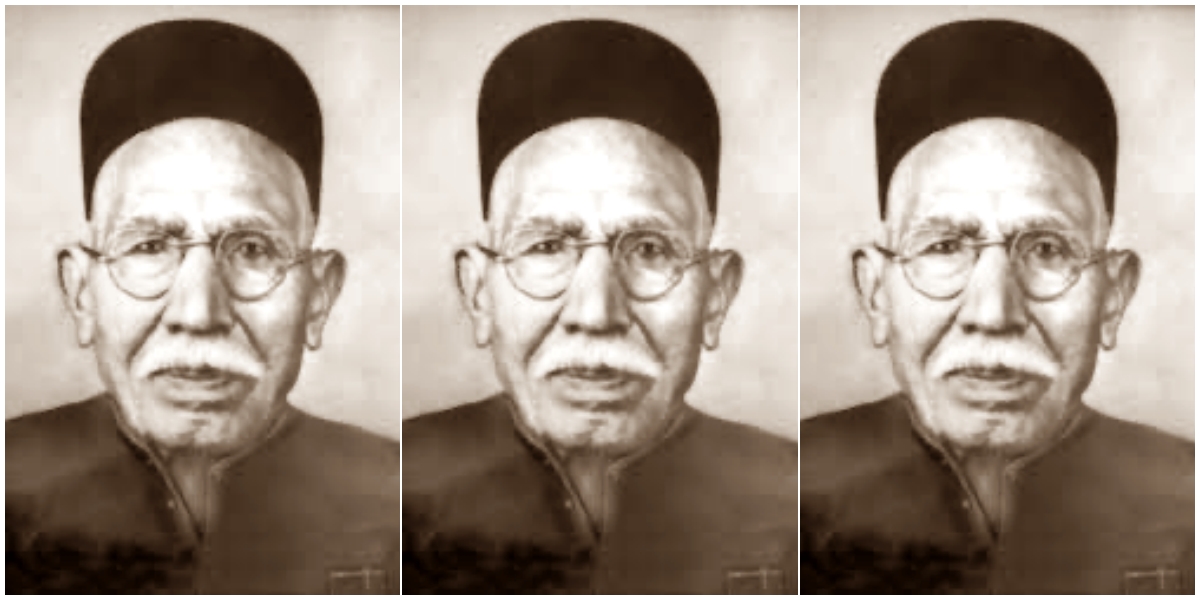 Can religion play a revolutionary role in society? Philosophers, people of letters and social scientists since the dawn of ‘Enlightenment’ in Western Europe have struggled to provide an answer to this very interesting question.

In the Indian context, we have seen religion has also served as a medium of social protest – specifically against the tyrannical caste system. From Charvaka to the Buddha to Bhakti saints like Raidas, Kabir, Nanak and Namdev, the critique of the social order had expressed itself in the language of religion.

Even in the modern period, religion has been the dominant vehicle through which the caste system has been challenged. From Jyotiba Phule’s Satyashodak dharma in Maharashtra to Narayan Guru’s reinterpretation of Advaita in Kerala, to the various strands of Adi movements (Adi-Hindu, Adi-Andhra, Adi-Dravida) that emerged in the early decades of the 20th century, all dissented against the Brahmanical Hinduism by proposing an alternate religious system and were geared towards constructing a separate identity for the so-called ‘untouchables. The ‘Adi’ was meant to signify that the “untouchables” were the original inhabitants of the Indian subcontinent who were displaced by the Aryans to the margins of society. Another significance of the term ‘Adi’ was to counter the claims of Hinduism being the eternal religion or Santana Dharma. Since the so-called lower castes were the original, adi inhabitants of the Indian subcontinent, theirs was also the original religion of the land.

One such movement that gathered storm in the late 1920s and continued its momentum in the 1930s was the Ad-Dharm movement in Punjab, whose foundation was laid by Mangoo Ram. He came to be known as Mangoo Ram Mugowalia because he came from the Mugowal village of Hoshiarpur district in Punjab.

Mangoo Ram was born on January 14, 1886 to Harnam Das and Atri, who died when Mangoo Ram was just three years old. By the time Mangoo Ram was born, his father had left the caste prescribed occupation of tanning and preparing hides and was instead trying his hand at selling them commercially. Because commerce required the know-how of English, Harman Das had to depend on literate members of society. Harman Das, therefore, was determined to educate Mangoo Ram.

Initially taught by a village sadhu, Mangoo Ram was admitted to school when he was seven years old. In most of the schools where Mangoo Ram studied, he was the only student from a Scheduled Caste. He was always made to sit outside of the classroom or in a separate room or outside the building and had to listen to lectures through windows or doors.

In high school, he was beaten up by a Brahmin teacher because Mangoo Ram had entered the school building to take shelter from a hailstorm. Despite all these hurdles and the overt, brutal discrimination, Mangoo Ram proved to be a good student and stood third in his primary school. In 1905, he left school and joined his father in the family business and helped him for three years. During this time, he also got married.

Things took a decisive turn for Mangoo Ram in 1909, when he decided to go to the US – a decision fully supported by his father. He took a loan from local landlords and started his voyage with two friends, reaching American shores by the end of 1909. For four years, Mangoo Ram worked in various capacities in different cities.

In 1913, a few migrants from Punjab formed the Ghadar party, a militant nationalist organisation, in California. Mangoo Ram was quick to join the movement in San Francisco and quickly rose up the ranks. In 1915, the Ghadar party and other Indian nationalists planned a pan-India mutiny against the British Indian Army. As a part of this plan, five Ghadarites were chosen to smuggle weapons to India. Mangoo Ram, who was part of this team, was given the pseudonym ‘Nizamuddin’. On their way to India, this group was threatened by an Australian military ship, arrested by the Japanese on behalf of the British and sentenced to one year in prison. By this time, the British had discovered the plot and subdued it successfully. 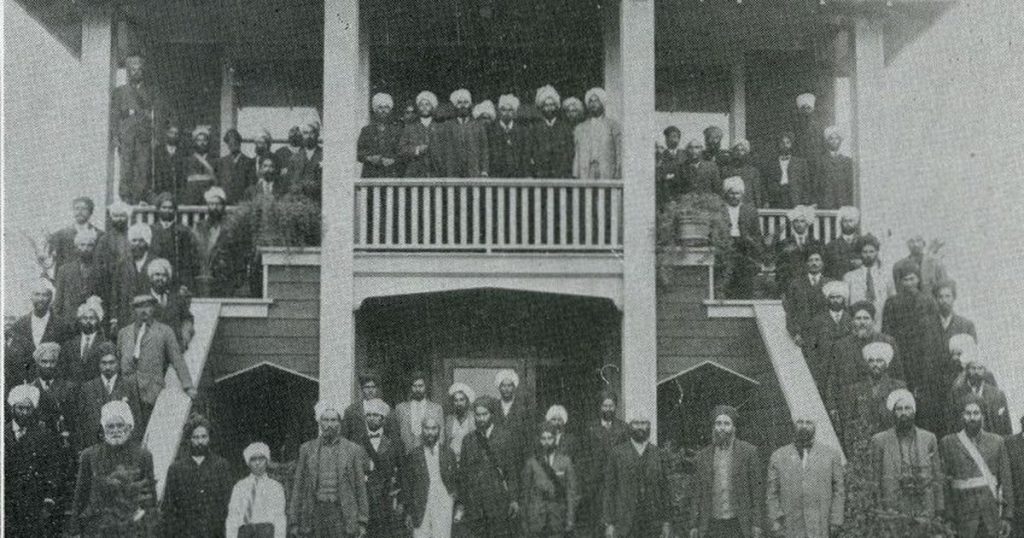 Stockton gurdwara, 1916. The Ghadar Movement was an effort by India expatriates to liberate India from colonial rule. The Hindusthanee Student/Wikimedia Commons

The British took over the Indian prisoners from Japan and decided to hang the group of five but Germans agents managed to whisk them away. The five revolutionaries went their separate ways. Mangoo Ram and two of his comrades went to Manila, but because of a typhoon, their ship landed in Singapore where two British spies – Bela Singh and Bhag Singh – handed them over to the British. The British decided to execute them by placing them before a canon, but again fate intervened and once again German agents whisked Mangoo Ram away and put him on a ship headed to Manila.

In 1919, when the first World War ended, Mangoo Ram finally found some relief. But instead of going back to India, he decided to stay in Manila.

In 1925, Mangoo Ram finally decided to head back to India. He arrived in Ceylon (present day Sri Lanka) and travelled to Punjab via Madhuri, Chennai, Mumbai, Pune, Satara, Nagpur and Delhi. In the course of this journey, Mangoo Ram encountered widespread discrimination against the Scheduled Castes. This journey through India helped Mangoo Ram understand the scale of caste-based oppression, as he writes in his autobiography, “I was dismayed to see our people being treated so badly.” In Madurai, while visiting the Meenakshi temple he was asked not to touch the “untouchables”. Perhaps, the memory of being made to sit outside classrooms came back to his memory and struck him like lightning.

By the time Mangoo Ram reached Punjab, he was fairly convinced that Indian society needed urgent transformation. For the British government, Mangoo Ram was dead – blown to pieces in Singapore! In some way this provided a clean slate for him. He changed his priorities and wrote to the Ghadar Party explaining the conditions of Scheduled Castes. Mangoo Ram argued that the freedom of Scheduled Castes was more important to him, to which the Ghadar party agreed. Mangoo Ram later said that the leader of the Ghadar party agreed with his proposition and designated him to officially work for the upliftment of oppressed castes groups.

Also Read: Despite Politicians’ Attention Now, Core Issues of Dalits in Punjab Have Always Been the Same

In the later part of 1925, Mangoo Ram started teaching in primary school in his village, where he had become kind of a folk hero because of his trials and tribulations. Before the entry of Mangoo Ram in the scene, several attempts where being made by people like Thakur Chand, Swami Shudrananad and Vasant Rai among others from 1922 onwards to organise the Scheduled Castes under the banner of Ad-Dharma in Jallandhar. All these personalities were previously part of the Arya Samaj, which had launched a fight against untouchability but within the Brahmanical framework. Disappointed with Arya Samaj’s Brahmanical framework, these leaders decided to launch their own organisation by separating themselves from the Hindu fold. Despite their persistent effort, the Ad-Dharma movement was not able to take off. In 1926, a delegation of Scheduled Caste leaders met the charismatic Mangoo Ram and persuaded him to join the movement.

The founding meeting of the Ad-Dharm Mandal took place on 11-12th June 1926 at the same school where Mangoo Ram taught. He was elected as the president of the organization. With the entry of Mangoo Ram the Ad-Dharm Mandal was infused with radical Ghadarite spirit and movement created a storm in Punjab as it often came in confrontation with the Arya Samaj as well as Muslim and Sikh organizations who were trying to get the scheduled castes within their fold as under the rules of communal representation, the number of seats in assembly was fixed in proportion to the size of every community.

The Ad-Dharm Mandal declared complete separation from the Hindu religion. In the course of the next five years, through intensive campaigns, the movement convinced almost half a million “untouchables”, despite the opposition of Sikhs and Hindus, to register themselves as Ad-Dharmis in the 1931 census – a huge success.

Following this, the Ad- Dharm Mandal presented a report on May 15, 1931, which remains a landmark document explaining the entire rationale and logic of the movement along with the basic tenets of the Ad-Dharm, like their beliefs practices and rules to be followed by those who adopt the religion. It declared that the “untouchables” had three powers: communal pride, religion and organisation and declared that “we should distinguish among Hindus, Ad Dharmis and other communities of India” and called for the boycott of religious scriptures that justified the caste system.

Even though the Ad-Dharma movement subsided by the late 1930s and later merged with the Ravidassias for a brief revival in the 1970s, professor Raunki Ram,  Mark Juergensmeyer and others argue that it played an important role in the formation of Dalit consciousness in Punjab.

During the second roundtable conference, when Gandhi opposed Dr B.R. Ambedkar as the representative of “untouchables” and depressed classes, Mangoo Ram and his Ad-Dharm Mandal from Punjab and Swami Achutanand and his Adi-Hindu movement from the United Provinces (present-day Uttar Pradesh) organised a mass campaign and sent telegrams to the conference, proclaiming Ambedkar as their representative.

In his pre-independence political career, Mangoo Ram was elected to the Punjab assembly as a member of the Unionist Party in 1946 and in the post-independent era in 1972 from the Congress party. During both his tenures, Mangoo Ram pressed for more educational and job opportunities for the “untouchables”.

While Mangoo Ram’s contributions to the Ghadar Party and Ad-Dharm movement are well known, historians and scholars have only made cursory remarks about his impact on the Indian revolutionary movement and Bhagat Singh.

There is no documented proof that Bhagat Singh came in contact with Mangoo Ram or vice-versa. But, we can be sure that Bhagat Singh was heavily influenced by the Ad Dharm Mandal’s challenges to caste and untouchability in Punjab. He might either have engaged with activists of the Adi Dharm Mandal or come across pamphlets and documents of the Mandal, because his views on the caste question were in perfect alignment with the Mandal.

Bhagat Singh wrote an article titled ‘The Problem of Untouchability’, which appeared in the Kirti newspaper in June 1928. Here, he mentions the Ad-Dharm Mandal and notes that this movement was an outcome of two things: a) the attempts by Hindu, Sikh and Muslim organisations to divide the ‘untouchables’ among themselves in order to boost their numbers in light of the Minto-Morley reforms which reserved seats in provincial assemblies in accordance with the size of each community; and b) the attempts by “untouchables” to organise themselves separately from the dominant religious communities.

In the article, Bhagat Singh welcomed the Mandal’s attempt to organise the “untouchables” on their own and supported their demands for a separate electorate. Evoking, African-American abolitionist Frederick Douglas’s quote, “Those who would be free themselves must strike the blow”, Bhagat Singh asked the “untouchables” to organise and revolt against the entire society.

Through Bhagat Singh, Mangoo Ram had an indirect impact on the Hindustan Socialist Revolutionary Association (HSRA), which during its foundation meeting decided to do away with every caste and religious symbol. Mangoo Ram Mugowalia passed on April 22, 1980 at the ripe age of 94. In his dynamic political career that spanned 65 years, he emerged as the beacon of light and hope for “untouchable” communities oppressed throughout Indian history. His legacy lives on!

Harsh and Shivam are PhD students at the Centre for the Study of Social Systems, JNU. Shivam is also one of the co-editors of Trolley Times.