What the MP Children's Murders Tell Us About Caste and Cleanliness

An 'ODF' village has seen a caste crime of staggering brutality over what is ostensibly, open defecation. 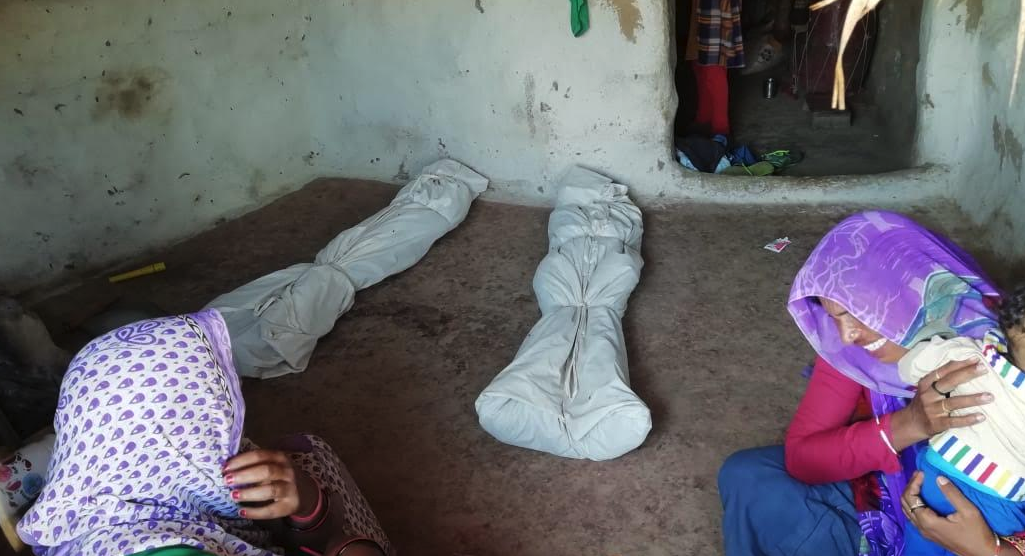 The bodies of the two children at their house in Madhya Pradeh's Shivpuri district. Photo: The Wire

Bhopal: It is safe to say that there are no parallels to the incident where the two Dalit children were beaten to death for defecating in the open in Shivpuri, a district of Madhya Pradesh’s Gwalior Chambal region.

It was Wednesday morning. Twelve-year-old Roshni and 10-year-old Avinash, who did not have a toilet in their house, had defecated in the open near the Panchayat Bhavan, said Sirsod police station in charge R.S. Dhakad. “The accused objected to their act and beat them mercilessly with sticks,” he added. The children were taken to the hospital, where the doctors declared them brought dead. The accused are two bothers of a Yadav community in Bhavkhedi village of the Shivpuri.

Shivpuri is nearly 312 kilometres north of Bhopal. Bhavkhedi village is 27 odd kilometres from the district headquarters.

The brothers, Hakim Yadav and Rameshwar Yadav have been arrested. They had clicked photos on their mobile phone before attacking the minors. Hakim Yadav later told police that he killed the children because he had been “commanded by god to kill demons.”

Roshni’s elder brother and Avinash’s father, 35-year-old Manoj Walmiki, told police that his family had been forced to defecate in the open as an influential member of the village panchayat – incidentally a relative of the Yadav brothers – did not let him build a toilet at home.

Manoj also told reporters that the family had been repeatedly targeted by upper caste villagers. They were not allowed to draw water from the village hand pump unless all other residents had done so. “I had a heated argument with the accused two years ago. They had wanted me to work for them as a labourer for a meagre sum. They abused me on caste lines and threatened to kill me,” he said. 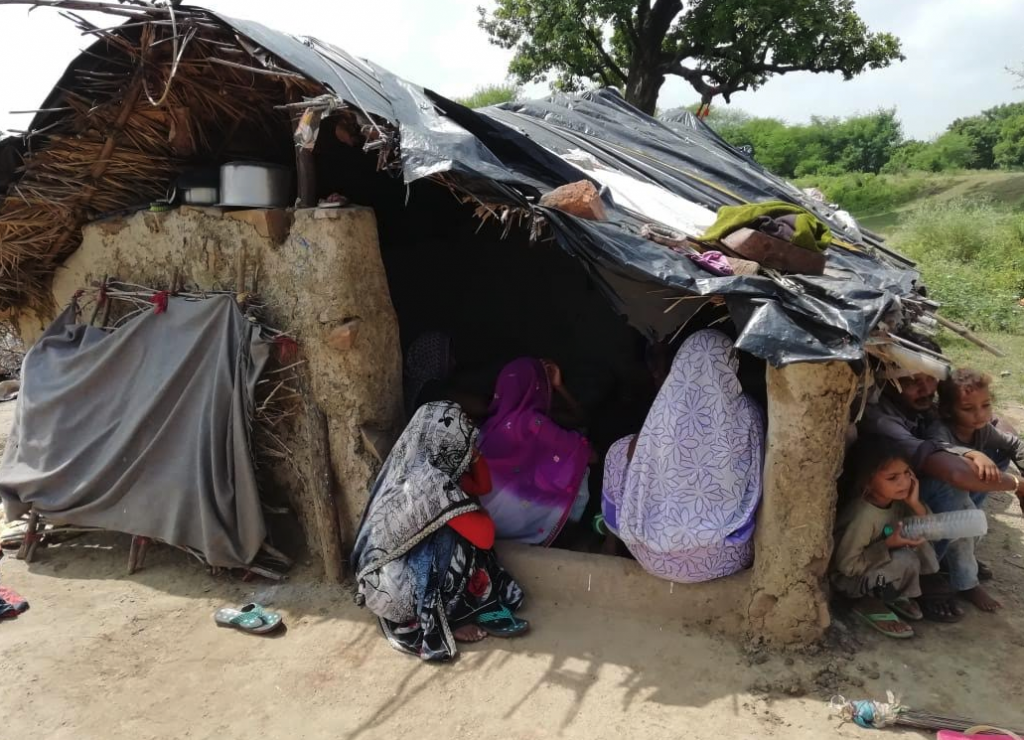 The Walmikis’ hut. Photo: The Wire

According to the Shivpuri superintendent of police (SP), Rajesh Chandel, an FIR has been registered under Section 302 of IPC and relevant sections of the Scheduled Caste and Scheduled Tribe (Prevention of Atrocities) Act against the two accused.

The FIR, a copy of which is in possession of The Wire says, “The two minors were having a latrine near the road in front of their house, when neighbours Hakim Yadav and Rameshwar Yadav holding lathis came near to them and shouted on them for dirtying the place and hit them with lathis on their head and face (sic)”.

Manoj had called police at emergency number of 100 and the ambulance at 108, the FIR said.

Manoj’s is the only Dalit family in the village. His mud house has thatched roof and plastic sheets as walls. It does not have electricity connection. A functioning toilet would need a sceptic tank or a connection to a sewage network, enough water to clean and flush, and regular flow of water in flush tank. None of these are things the Walmikis look remotely close to being able to secure for themselves. 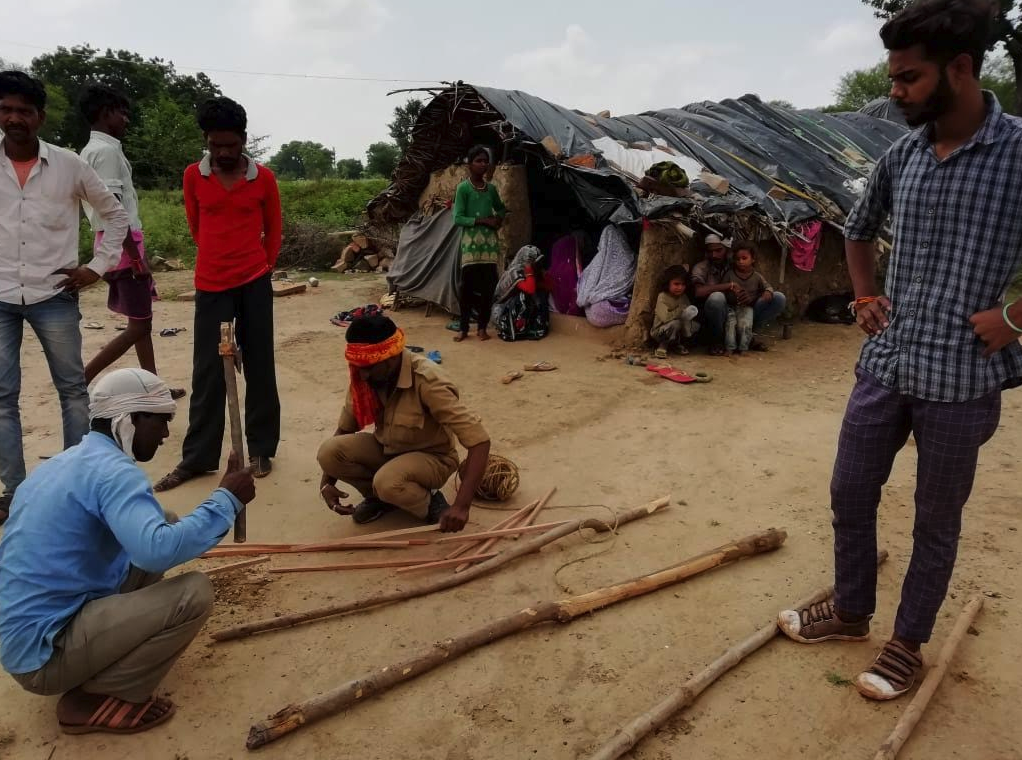 Another view of the hut. Men prepare the structures to carry the children’s bodies from their house. Photo: The Wire

Now comes the irony: the village is marked ODF.

Shivpuri collector Anugrah P. who met the family to hand over cheques of ex-gratia of Rs four lakh for each of the children had an argument to justify the ODF tag. “There was a toilet in the house where Manoj’s family lived jointly. They moved to this house a little while ago,” she said.

The Madhya Pradesh chief minister too has expressed concern over the murders and directed police to take strict action against the accused.

Also in the fray is Bahujan Samaj Party (BSP) supremo Mayawati who condemned the brutal attack on the Dalit minors and slammed the successive BJP and Congress governments in Madhya Pradesh for “failing to provide proper toilet facilities”.

The sufferings of  this particular Dalit family points to a gradual but certain strengthening of caste lines in rural Madhya Pradesh. Shivpuri district is no exception, with its significant population of the Dalit Jatav community throughout the Gwalior-Chambal region. 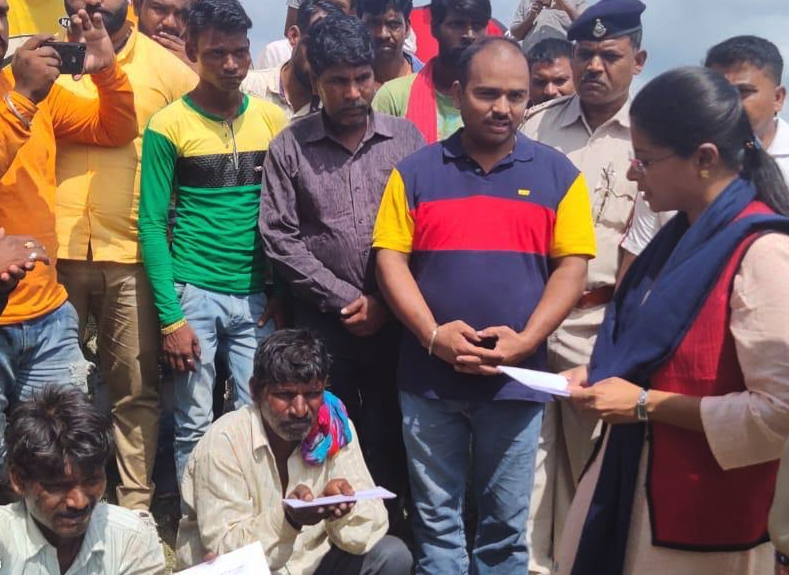 Shivpuri collector Anugrah P. is seen meeting family members to hand over cheques of ex gratia of Rs 4 lakh each on Thursday. Photo: The Wire

Just last year, during the April 2 Bharat Bandh to protest the dilution of the Scheduled Caste and Scheduled Tribe (Prevention of Atrocities) Act by the Supreme Court, eight people were killed. It’s equally important to know that all those who were killed were fired on by police as well as upper caste men who were natives of the Gwalior-Chambal region.

According to the records available with law enforcement agencies, around 5,000 people participated in the protests in Gwalior, 6,000 in Bhind, and 3,000 in Morena. Police had to fire teargas shells twice to ‘control’ protestors in Shivpuri district.

Five months later, when large sections of people took to the streets in September to protest against the alleged misuse of the act, the state government had imposed Section 144, and suspended internet services in the entire Gwalior-Chambal region and adjoining districts for more than three days.

Almost a month later, on October 1, Shivpuri resident Atendra Singh Rawat went to the high court pleading for anticipatory bail in an SC/ST Act case lodged against him, citing then chief minister Shivraj Singh Chouhan’s assurance that no arrests would be made before an investigation in SC/ST Act cases.

Also read: The Dark Realities of the SC/ST Atrocities Act: An Ethnographic Reading

Chouhan’s words did not have legal sanctity but had been made at a campaign rally ahead of next month’s assembly elections in the state. The then Shivpuri SP said in court that the statement made by the chief minister at an election meeting on September 20 would have “no legal sanctity and no written instruction has been received by the SP in this regard from the state of Madhya Pradesh”.

As per 2016 data released by the National Crime Records Bureau, Madhya Pradesh ranks first and neighbouring Rajasthan is second when it comes to atrocities against Scheduled Castes, based on the crime rate.