Akhilesh Yadav's political fortunes in the 2022 Uttar Pradesh assembly polls hinge on his party's performance in the general elections. 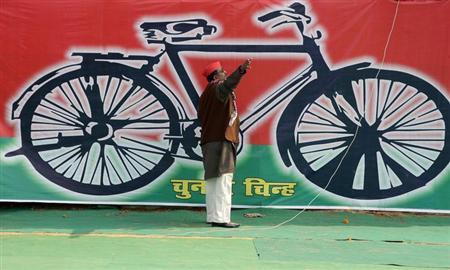 A Samajwadi Party worker gestures in front of a banner with the party's electoral symbol, the bicycle. Credit: Reuters/Jitendra Prakash/Files 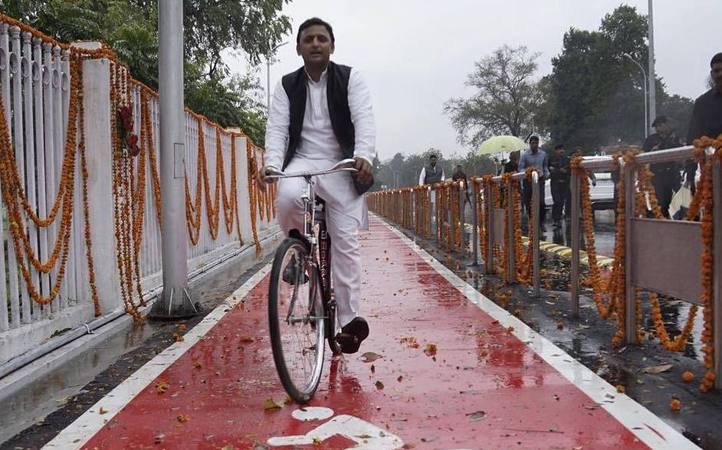 To regain lost ground in Uttar Pradesh ahead of the 2019 Lok Sabha elections, the Akhilesh Yadav-led Samajwadi Party (SP) is going in for a major image revamp in a bid to consolidate its core vote bank, mainly the other backward classes (OBCs) and Muslims.

The 2019 Lok Sabha elections are crucial for the two key opposition parties in UP – SP and Bahujan Samaj Party (BSP) — both of which were trounced by the Bharatiya Janata Party (BJP) in the Lok Sabha  as well as the state assembly elections by managing to draw away their traditional caste and minority support base.  Both the UP-centric parties know full well that their political fortunes in the 2022 assembly polls hinge on their performance in the 2019 Lok Sabha polls.

In a bid to revive the SP, Akhilesh Yadav, who is now at the helm of affairs after dislodging his father Mulayam Singh as the party supremo, has issued an advisory to all its district units to remove those with criminal backgrounds from key party positions, and appoint more Muslims, other backward classes (OBCs) and women as office-bearers.

In a clear message, the former chief minister has told his party that no criminal is to be appointed as office-bearer, while Muslims and OBCs are to be given preference.

Also, it has been made mandatory that at least three-to-five women are inducted into every working body of the party. SP’s organisational spread includes district/city units, assembly segment unit, state-level unit, besides 14 frontal organisations, including its youth wing.

The advisory by party president Naresh Uttam, which comes ahead of the March bypolls for the  Gorakhpur and Phulpur Lok Sabha seats,  categorically states that “extra caution” should be taken while appointing any worker on an official post. “No criminal case like Goonda Act, Section 302 (murder) etc. should be lodged against him,” Uttam said in the advisory. In Uttar Pradesh, SP has often been criticised for  sheltering lumpen elements, and reigning in party cadres has been a major challenge for Akhilesh Yadav.

SP legislator and spokesperson Sunil Singh Sajan admitted that often people who have made no contribution to the party’s functioning, find a place in the organisation. Some people are not even active members of the party, he said, adding, “This practice should be stopped. It is because of this that an advisory has been issued.”

Of late, a few SP leaders who lost elections have been seen warming up to the ruling BJP. Party insiders said Akhilseh Yadav is reportedly keeping tabs on some of the leaders whose images are being circulated on social media.

“Another factor (behind SP’s image revamp)is chief minister Adityanath reaffirming a ‘no tolerance’ policy towards criminals Akhilesh wants to ensure that no criminal element, however small, should creep into the party, resulting in an embarrassing situation,” said Asif Jafri, a political analyst based in at Lucknow, the state capital.

As part of the revamp, SP has also decided to do away with ‘armchair’ workers. The party has made it  mandatory that only those workers will be appointed to party posts whose local booth was won by SP in the 2017 assembly polls. This step has been taken as Akhilesh Yadav had to face an embarrassing situation after many youth leaders close to him could not even manage to win their polling booths.

However, the ‘advisory’ that Muslims and OBC should be given preference in the party organisation, has created some ripples in SP’s rank and file. In the past two polls — 2014 Lok Sabha and 2017 assembly polls — both these sections of the population had drifted away from the party. In the recently concluded civic polls, more Muslims have reportedly deserted SP. “In the polls for Ferozabad’s Mayor, SP was relegated to the third place while Asaduddin Owaisi’s AIMIM got second place. This was because Muslims voted for Owaisi and not SP,” said Vinod Yadav, a journalist. Ferozabad is considered a SP stronghold and Akhilesh Yadav’s cousin Akshay is an  MP from this seat.