Interview: Jignesh Mevani on the Azadi Kooch, Solidarity and the Future of Dalit Politics

As far Gujarat is concerned, the cases of atrocities against Dalits have increased post Una, so has the state repression. 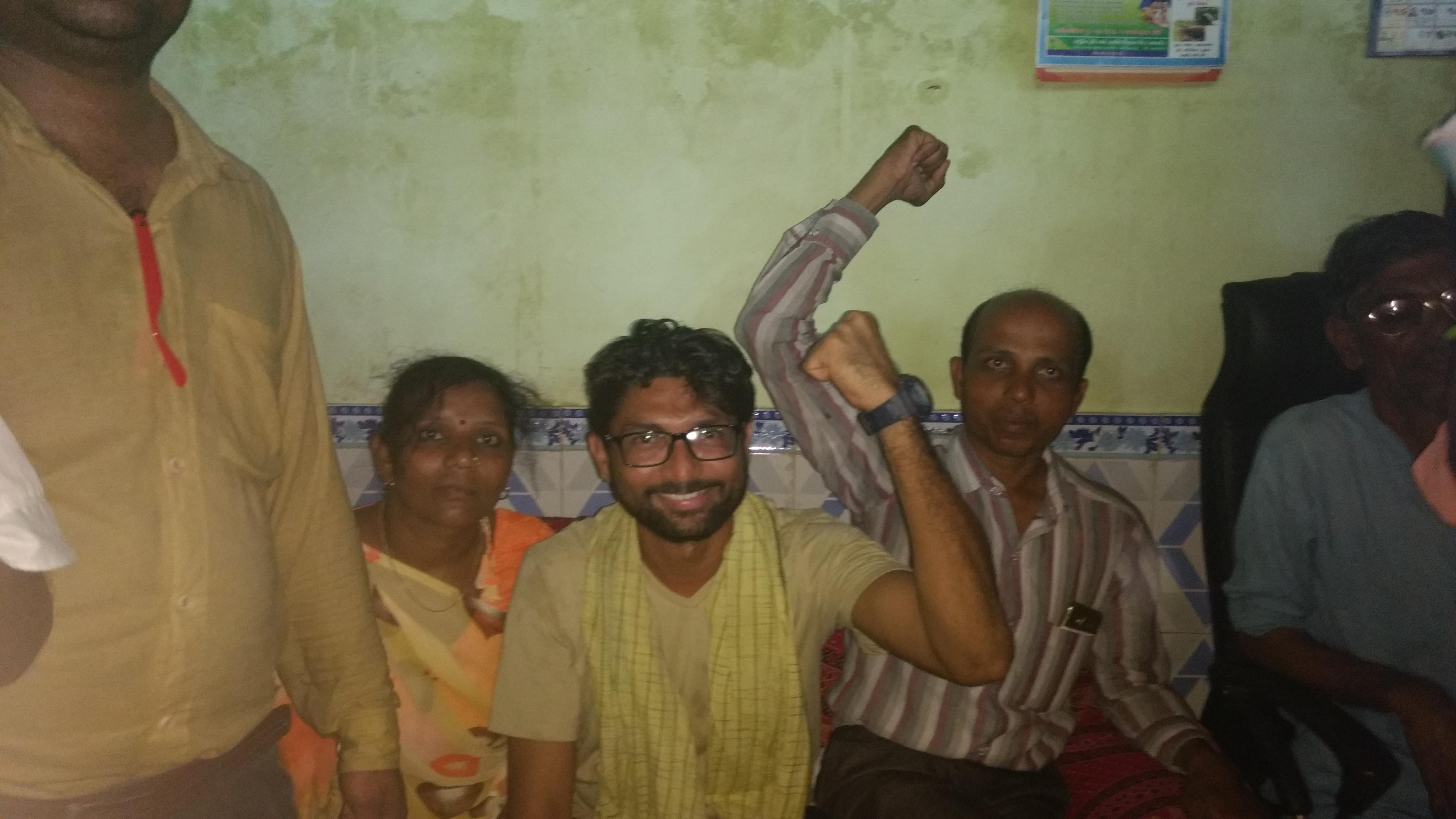 Jignesh Mevani and others participating in the Azadi Kooch. Credit: Damayantee Dhar

As a reaction to the flogging of five Dalit men in Una on July 11 last year, the Dalit Asmita Yatra – a movement that gained unprecedented momentum as it made its way around Gujarat – took shape. This was the movement that moulded Jignesh Mevani, a young lawyer and activist, into a leader of the Dalit movement.

A year later, the Azadi Kooch organised by the Rashtriya Dalit Adhikar Manch (RDAM) is taking the legacy of the Una movement forward. As the rally makes its way to Dhanera, where it culminates on July 18, Mevani spoke to The Wire about issues ranging from the recent controversy and criticism that has surrounded him, the implications of joining hands with Patidars and Thakors, his take on Dalit movements and their drawbacks, the land issue and the journey of RDAM so far, and their immediate and more long-run goals.

A year has passed since the Dalit Asmita Yatra. Was there an impact of the movement on ground and has the condition of Dalits changed since then in Gujarat?

As far Gujarat is concerned, the cases of atrocities against Dalits have increased post Una, so has the state repression. Cases of cow vigilantism are now rampant across the nation. Data we got through an RTI filed by one of the core members of RDAM also reveal that the rate of incidents have risen in Gujarat post 2016. However, the Una movement and the agitation following the death of Rohith Vemula last year, and the mobilisation post the incident in Saharanpur this year, have given Dalits a voice that they never had before. Dalits, both in Gujarat and rest of the country, are more conscious now and are braving the odds, and coming out into the open to register their protest. That is a tremendous boost to the Dalit psyche.

RDAM was formed during the Asmita Yatra and is now organising the Azadi Kooch under its banner. How far has the organisation come in the last year?

The core team of the RDAM, who formed the organisation, has remained united and undeterred through all odds in this one year. The organisation has no financial support or backing from any NGO or political party. The organisation cannot even afford an office yet. None of the members have any prior experience in public life or activism. However, the core team has been able to sustain the momentum so far and continued to struggle through this one year, even when the consequences have included an FIR with charges for which the maximum punishment is five years in jail. In the years to come, the team also has to form an ideological foundation. Until then, the team functions as per my ideological vision. May be four or five years from now, the functioning will be more democratic. Some core members have also left the organisation because of disagreements on the process, but that happens to almost all organisations. I am more careful than before, but still not bothered much about that.

A lot controversy and criticism has been surrounding you off late. One of the criticism is around the absence of the Una flogging victims from the conference organised by the RDAM in Ahmedabad on July 11, even though the victims were in the city the same day. Why did the victims give the programme a miss?

The victims of Una have openly stated their inclinations towards the Bahujan Samaj Party (BSP) and I don’t have any such inclination. Under such circumstances, some other Dalit organisations who are pro-BSP have completely them taken into confidence and the victims attended a programme organised one such Dalit organisation. I don’t mind if Balubhai Sarvaiyya does not share a stage with RDAM. I don’t believe in taking the victims along everywhere. The Una movement was never for just the plight of those four boys. It aimed beyond that and did manage to transcend the immediate cause.

In your speeches during the rally, you have talked about how Azadi Kooch is about a larger picture and yet it is also taking the legacy of the Una movement ahead. How is Azadi Kooch different from the Dalit Asmita Yatra?

Azadi Kooch is bigger than the Dalit Asmita Yatra. There is no denying that the Dalit Asmita Yatra was an unprecedented Dalit movement and we shall take the legacy of the movement forward. The land issue still remains at the core of the movement and so does the question of ‘Dalit asmita’. However, I don’t believe my role is just in Gujarat. In fact, in Gujarat we (Dalits) are just 7% of the state’s population. I think there is a need to create a substantial Dalit movement all over the country and that is why I have travelled extensively to different parts of the country and participated in various struggles.

But I have clarity that Gujarat cannot be neglected and I am never out of Gujarat for more than a week at a stretch. The Dalit Asmita Yatra was about core Dalit issues, but Azadi Kooch is taking up those core issues along with issues like farmers’ suicides, privatisation of health and education, price inflation, cow vigilantism and the rise of right-wing menace across the country, like in the formation of ‘anti-Romeo’ squads in UP. Azadi Kooch is a platform that will take up issues from Uttar Pradesh to Kerala. There is a lot on the list but it is viable. I want to develop a nationwide Dalit movement . 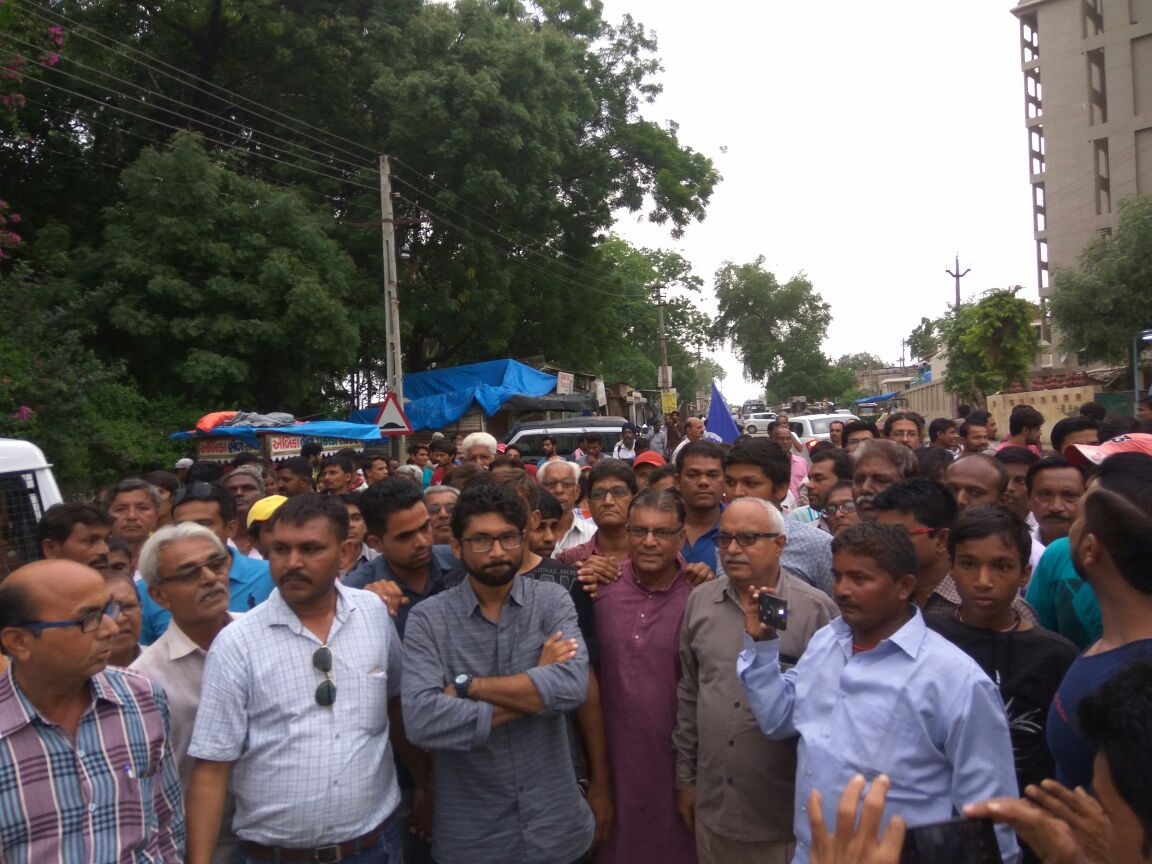 Last year, the movement had a lot of support from civil society, but this year it doesn’t seem to. Why so?

On the one hand, you have radical leftists joining the rally and on another hand, Patidars and Thakors. Patidar and Thakors are the two communities who have come into conflict with Dalits when it comes to land issues. How was such a contradictory alliance forged? What will be the implications when people with such extreme ideological differences come together on a common platform?

Dalits and leftists, I believe, are natural allies. Dalits have been victims of both class and caste polemics. So it is no surprise that leftist organisation has joined the yatra. Though the leftist movement in our country has been limited to a mechanised fight against class and has historically never talked about caste, we (at RDAM) shall bring the issue of caste into the picture. The emancipation of Dalits is not possible without caste annihilation and like the leftists, we too believe it can only be achieved through the amalgamation of communities.

One reason to bring for bringing the Patidars and Thakors is also to bring communities together. However, I will never support them politically and for that matter this is not an alliance per say. As far as the conflict on the land issue is concerned, I don’t know if Alpesh Thakor is aware of the whole situation on the ground and Reshma Patel will hopefully never support a Patidar who is wrongfully holding possession of a piece of land allotted to a Dalit. Besides, Patidars have been at the receiving end of flak from state machinery as well. The land issue is not the only cause I am fighting for, there is a dire need for the consolidation of anti-right-wing forces. This is also an attempt towards that ultimate end.

Kanhaiya Kumar has been seen sharing the platform with you. How does the presence of a student union leader add value to the Dalit movement and what impact does he have on the core Dalit team?

Kanhaiya Kumar is a leader who has been able to capture the imagination of the masses in a big way. His presence has brought ‘Jai Bhim’ and ‘Lal Salam’ together. That is a huge impact. Besides, we also want to create a nationwide youth platform where people like him are much needed.

The participation of non-Dalits drew flak from some Dalit organisations last year during the Asmita Yatra. There is friction between different Dalit organisations, who will not come together for a common cause. Under such circumstances, how do you see Dalit consolidation happening?

This difference is mostly ideological, which I feel should not keep people from joining together, which is the need of the hour. Most Dalit movements and organisations have been confined to a microscopic vision of looking at issues. They are victim of what some may call reverse casteism. To discard someone just because he/she is from an ‘upper’ caste is as bad as ‘upper’ castes discarding Dalits. At the end, this becomes a vicious circle of the very Brahmanical practice that we want to get rid of.

This is the reason why I have been wholeheartedly ready to share the platform with all kinds of people. There are groups that will be pro-BSP, there are some who will give slogans of ‘Jai Moolnivasi’, some say they are bahujans. I would rather say forget all the differences – instead say we don’t have food to eat or have a roof over our heads. This ideological friction within groups affects the larger cause and weakens the movement. As of today, while demanding my rights I am asserting myself a a Dalit. But a time has to come when even the Dalit identity has to be given up. Finally, it has to be about the annihilation of caste and not further divisions. 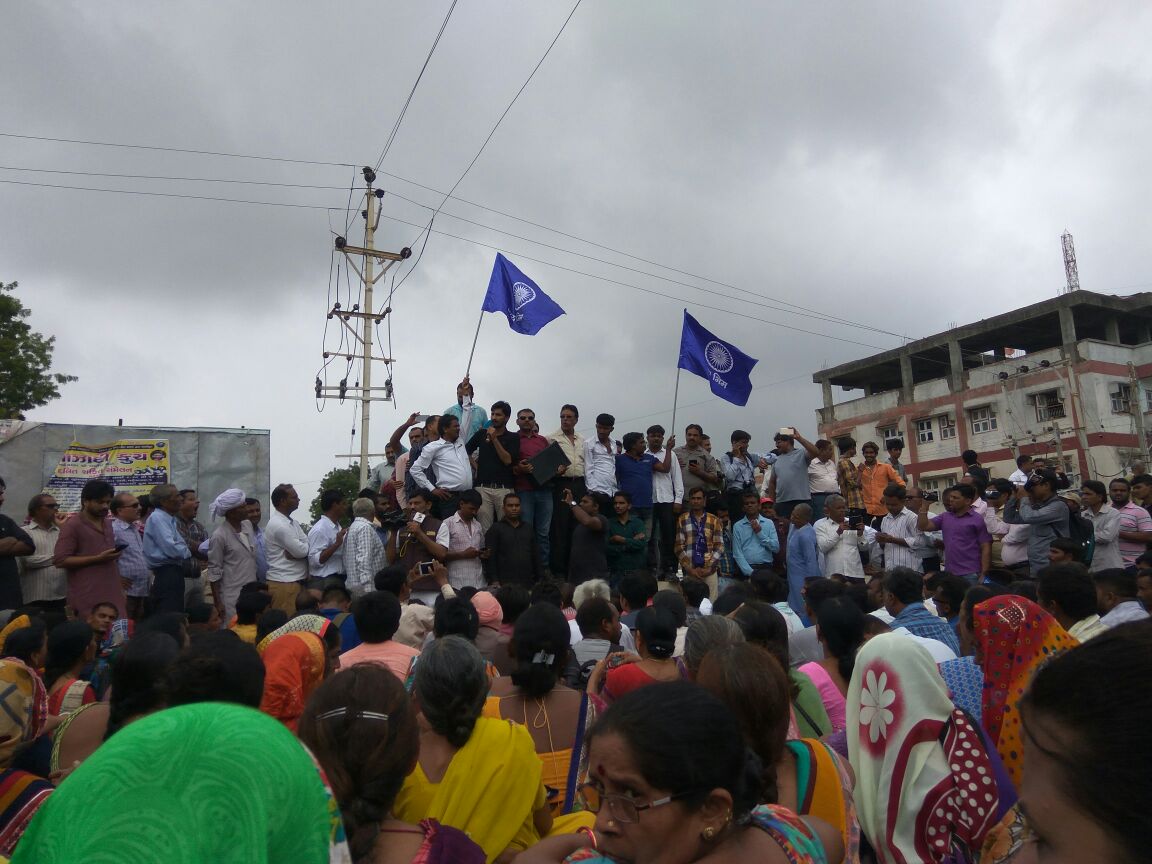 A press conference during the Azadi Kooch. Credit: Damayantee Dhar

During the Una Dalit Asmita Yatra, Dalits had pledged to never pick up carcasses again and quit the skinning profession. How has quitting this profession affected Dalits and their source livelihood?

Even though Dalits pledged that during the yatra last year, as I see it only a section of Dalits have been able to hold that stand on the ground. One has to understand it is not just that they are facing issues in earning their livelihood. The decision to not pick up carcasses has also lead to the social boycott of Dalits in villages like Rantej and Par. Some have also stopped skinning dead animals because of a sense of fear. Many Dalits work as labourers now after quitting skinning as profession. Some Dalits who quit have also taken it up again. This will not yield results until a concrete design for alternative employment is in place. So in a way we come back to the land issue, which could be an alternative source of income.

The way Dalits view Ambedkar is almost as if he their God. You have been very strongly against this practice and culture amongst Dalits. How difficult has it been negate this practice, especially in rural areas?

The Indian constitution talks of about untouchability and not annihilation of caste. So I have always maintained that with great respect for the great man and his contributions, we can and will have disagreements with what Dr Babasaheb Bhimrao Ambedkar has already given us. I tell Dalits, Babasaheb would want rational supporters and not blind believers. Such a culture of taking Ambedkar to be God is again going back to the same Brahminical Hindu culture.

Do you have electoral plans?

Electoral representation is necessary and I am open to the thought, but not so soon. In years to come I will be open to join hands with any third party.

Damayantee Dhar is a freelance journalist.