Even as the VC of the university blamed the situation on 'human error', a faculty member said that this isn't the first time such 'tricks' have been employed. Jammu: Much like the travails endured by B.R. Ambedkar, who spoke of how he was kept ‘slightly apart‘ in his school, the University of Jammu, which is holding its 17th convocation on March 4 this year, has identified its Dalit faculty members by their caste while issuing invitations to them.

Images (see below) accessed by The Wire show how invites sent to faculty members who belong to the Scheduled Caste (SC) community clearly notes their caste in brackets next to their names.

Apparently, around 30 such faculty members received these invitation cards. Of these, 12 have confirmed that they received invites which spell out their caste.

The convocation, to which Union finance minister Arun Jaitley has been invited as chief guest, will also be attended by Jammu and Kashmir governor N.N. Vohra, chancellor of the university, and chief minister Mehbooba Mufti. 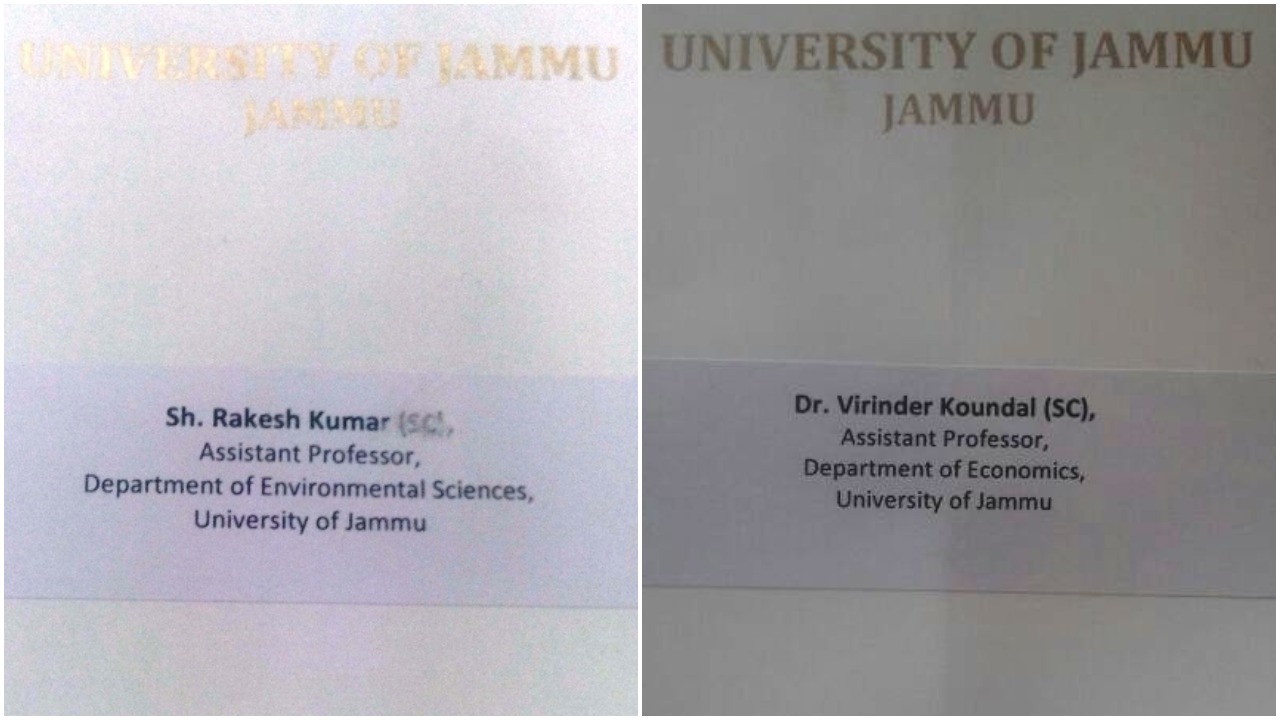 Of around 30 faculty members who belong to the SC community, 12 have confirmed that they received invites which spell out their caste. Credit: Bivek Mathur

‘Not a new problem’

According to some faculty members, such as Virender Kundal– a professor in the department of economics who has published many papers in reputed journals on the underprivileged sections of society – the invitation he received did not surprise him as this isn’t the first time faculty members have had to face such embarrassment over their caste.

“I can’t recollect the exact years it happened, but the varsity has more than twice humiliated professors from the SC community by mentioning their caste on invitation cards. We ignored such tricks but now we’re fed up,” said Kundal.

“If we do not speak up this time, it will become routine and the possibilities are there that in the future, they (the administration) will tag us as Schedule Caste 1st, Schedule Caste 2nd and so on. We have to protest this hegemony,” he said.

“In all of my [academic] papers, I’ve always applauded Jammu and Kashmir for being the only state in the country where untouchability has almost been abolished. But after noticing this sick mentality prevailing within its highest centre of learning, I am very disturbed.”

“Our late maharaja Hari Singh would worship girls from the Dalit community to try end the culture of untouchability and I hold him in high esteem. Even he would not be happy in heaven to see the attempts of some ‘sick minds’ to discriminate against people on the basis of their caste,” added Kundal.

Atri, an alumnus of Jawaharlal Nehru University, suspects that there is some “deep-routed conspiracy” behind the casteist invitation cards and that it isn’t a single man behind it, but the “entire varsity administration”. “Time and again, the SC faculty members have been humiliated,” he said.

When The Wire reached out to Prof. Ramji Dass Sharma, the Vice-Chancellor of the university, he blamed the whole sordid episode on “human error”.

“It was a human error and I have personally talked to most of my concerned colleagues and tendered [an] apology for the same and also assured them that it will not be repeated in future,” he told The Wire. 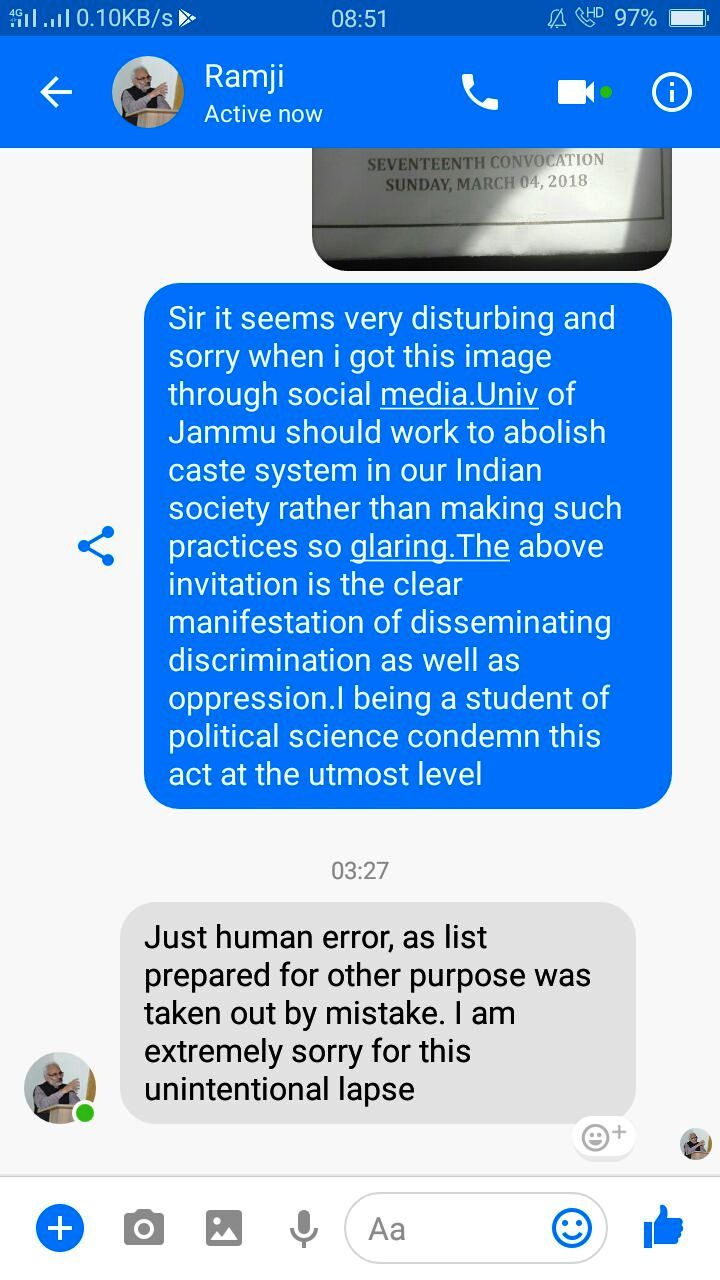 A screenshot of a Facebook chat a student had with the VC. Credit: The Wire

His response is similar to the one he gave to a political science student at Jammu University who wrote to him via the Facebook chat app. “Sir it [is] very disturbing and [I felt] sorry when I got this image through social media. [The] University of Jammu should work to abolish [the] caste system in our Indian society rather than making such practices so glaring. The above invitation is [a] clear manifestation of disseminating discrimination as well as oppression. I, being a student of political science, condemn this act…” the student wrote.

To this, the VC replied, “Just human error, as list prepared for the other purpose was taken out by mistake. I am extremely sorry for this unintentional lapse.”

In a message to The Wire, Meenakshi Kilam, the university’s registrar, also apologised for the invitation cards.

“On behalf of the committee that finalised the guest list and prepared name slips and the University of Jammu, I tender a deep and sincere apology for the inappropriate labels on the invitation cards. The convener and co-convener of the committee have been asked to immediately replace the cards. The inconvenience and hurt caused is deeply regretted,” she said.

Bivek Mathur is a journalist based in Jammu. He tweets at @89Jammu.