India Must Not Shield Itself From International Scrutiny on Caste Discrimination

The international recognition of caste-based discrimination as a form of racial discrimination may have some tangible effect on the rights of the Scheduled Castes in India. 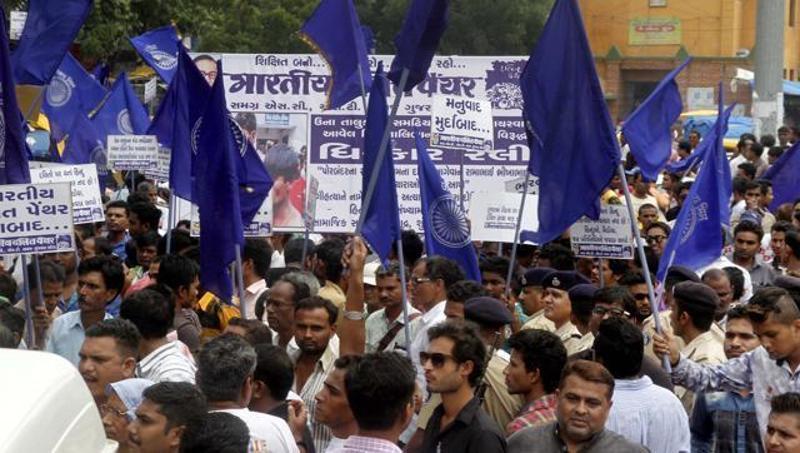 Dalits protesting discrimination against the community in August 2016. Credit: PTI

Over 80 years after B. R. Ambedkar wrote Annihilation of Caste, caste in Indian society continues to annihilate those proclaimed to be on the wrong side of it. Birth in the so-called ‘Scheduled Castes’ is a fatal accident with almost no chance of redemption. Constitutional guarantees and legislative mandates notwithstanding, this scripturally legitimised, socially pervasive and politically relevant system of birth-based discrimination continues to haunt and hurt the Scheduled Castes of India, also called Dalits. They bear the brunt of just being born while successive governments continue to fail them, deliberately or otherwise.

In recent years, again, there has been a spate of brutal attacks on them in different parts of the country. For instance, in Una, Gujarat, cow vigilantes attacked a group of Dalit men for merely performing what caste society regards as their caste-prescribed duty; elsewhere, the Yogi Adityanath government of Uttar Pradesh booked Chandrasekhar Ravan, a Dalit leader, under the National Security Act – a draconian preventive detention law – when the Allahabad high court had already pronounced the charges against him to be politically motivated.

In a report on minority issues submitted last year, the United Nations Human Rights Council’s (UNHRC) special rapporteur noted that there had ben a significant increase in crimes against Dalits. Worryingly, the report also pointed to state complicity in institutionalising the practice of manual scavenging, which continues to kill Dalit sanitation workers and is rampant in India despite laws to the contrary. Clearly, the Indian state has failed to ensure the demise of caste-based discrimination. This provides a compelling reason to evaluate if recognition of caste-based discriminations as racial discrimination by India – and the consequent international scrutiny this will attract – may have some tangible effect.

The convention defines racial discrimination to mean any distinction, exclusion, restriction or preference based on race, colour, descent, or national or ethnic origin which has the purpose or effect of nullifying or impairing the recognition, enjoyment or exercise, on an equal footing, of human rights and fundamental freedoms in the political, economic, social, cultural or any other field of public life. Importantly, the word ‘caste’ is not expressly mentioned in this definition; however the CERD, in its 61st session in 2002, recommended that:

“Discrimination based on descent includes discrimination against members of communities based on forms of social stratification such as caste and analogous systems of inherited status which nullify or impair their equal enjoyment of human rights.”

Despite this, India has consistently reiterated that ‘caste’ cannot be equated with ‘race’ or covered under ‘descent’ and thus has refused any information pertaining to the Scheduled Castes and Scheduled Tribes or issues related to this group in the periodic reports it submits to the CERD.

India justifies its stand by taking recourse to its constitutional provisions in which the terms caste, race and descent are used separately and thus are mutually exclusive. The fact is, however, that these terms were used separately out of abundant caution so as to completely eliminate the possibility of discrimination in a country beset with different kinds of inequality and oppression and thus it is difficult to conclude that the terms are completely distinct and that there is no overlap. Further, the Constituent Assembly debates do not provide much clarity as to the exact scope of these terms. In fact, when the Universal Declaration of Human Rights (UDHR) was being drafted, India actually advocated that caste should be recognised as a prohibited ground of discrimination at the international level, albeit this did not fructify. The issue was raised briefly by its delegates, Mohamed Habib and A. Appadorai, before finally being dropped because, as Appadorai put it, “his delegation had only proposed the word “caste” because it objected to the word “birth”. The words “other status” and “social origin” were sufficiently broad to cover the whole field” of discrimination.

Interestingly, even the term descent, initially, was not included in the draft definition of racial discrimination under the convention and was put in only because of an amendment proposed by India. This clearly illustrates the fact India’s stance on recognition of caste as a prohibited ground of discrimination at the international level has changed over the years to shield itself from international scrutiny. Considering that even India’s erstwhile ‘Hindu’ neighbour Nepal has no qualms in recognising caste-based discriminations  within the ambit of the racial discrimination convention, it’s difficult to rationalise India’s position.

How bringing caste in would help India’s Dalits

What’s worth mentioning here is that the CERD has already made a number of recommendations on issues that continue to plague the Scheduled Castes of India and if implemented, in earnest, may prove instrumental in improving their condition.

First, one of the notable recommendations of the committee was that the affirmative action benefits must be given to all Dalits irrespective of their religion. India, till date, takes away caste-based entitlements from Dalits who decide to embrace Islam or Christianity based on a 1950 Presidential Order. The order provides that only Hindus (including Sikhs and Buddhists) can be Scheduled Caste. This has been vehemently criticised even by the government-appointed Gopal Singh committee in 1983.  The Supreme Court of India, in the case of Soosai v. Union of India, has also conceded that caste continues to exist even after conversion. Despite this, the 1950 order continues to be in force. But recognition of caste-based discrimination as racial may impel the Indian government to stop this religion-based discrimination against a section of the Scheduled Castes.

Second, the CERD has recommended that reservation benefits to Dalits must be extended to the private sector. While this idea has been mooted in India, it has hardly received any serious consideration from the government. The CERD also urged India to provide protection to Dalits against arbitrary arrest, ensure effective remedies and justice to those who are victims of caste-linked violence and strengthen efforts to eradicate entrenched social acceptance of caste based discrimination. However, since India continues to regard caste-based discrimination as outside the purview of the CERD, these recommendations, relevant as they are, remain on paper –  not even meriting attention from the government.

Recognition of caste-based discrimination as racial may not be the magic wand that would set right centuries-old wrongs or even immediately transform the ground realities in India. But international discussion and concomitant international pressure will surely have a positive effect on the discourse concerning the rights of Scheduled Castes in India, particularly in this globalised world.

Also, India has been vociferously asserting itself as a superpower at the international level and has a reputation to protect and thus may not be able to brush the CERD’s recommendations completely under the carpet once it recognises caste-based discriminations to be within its purview. India’s periodic reports to the CERD have been pending since 2008. And in the current scenario of accentuated discrimination against Dalits, not only should they be submitted at the earliest, but they should also provide all the necessary information pertaining to Dalits to the international body. In fact, India should go a step further and make a declaration under Article 14 of the convention and allow individual aggrieved Dalits to directly approach the CERD. India takes pride in being the world’s largest democracy; it’s time it acted accordingly.