Photos: Brahmin Group Asserts Presence With Rally of its Own

Shome Basu provides a pictorial glimpse into a Brahmin Ekta Manch rally on the outskirts of the country's capital. "Lower Your Voice, A Brahmin Is Here," said a t-shirt. 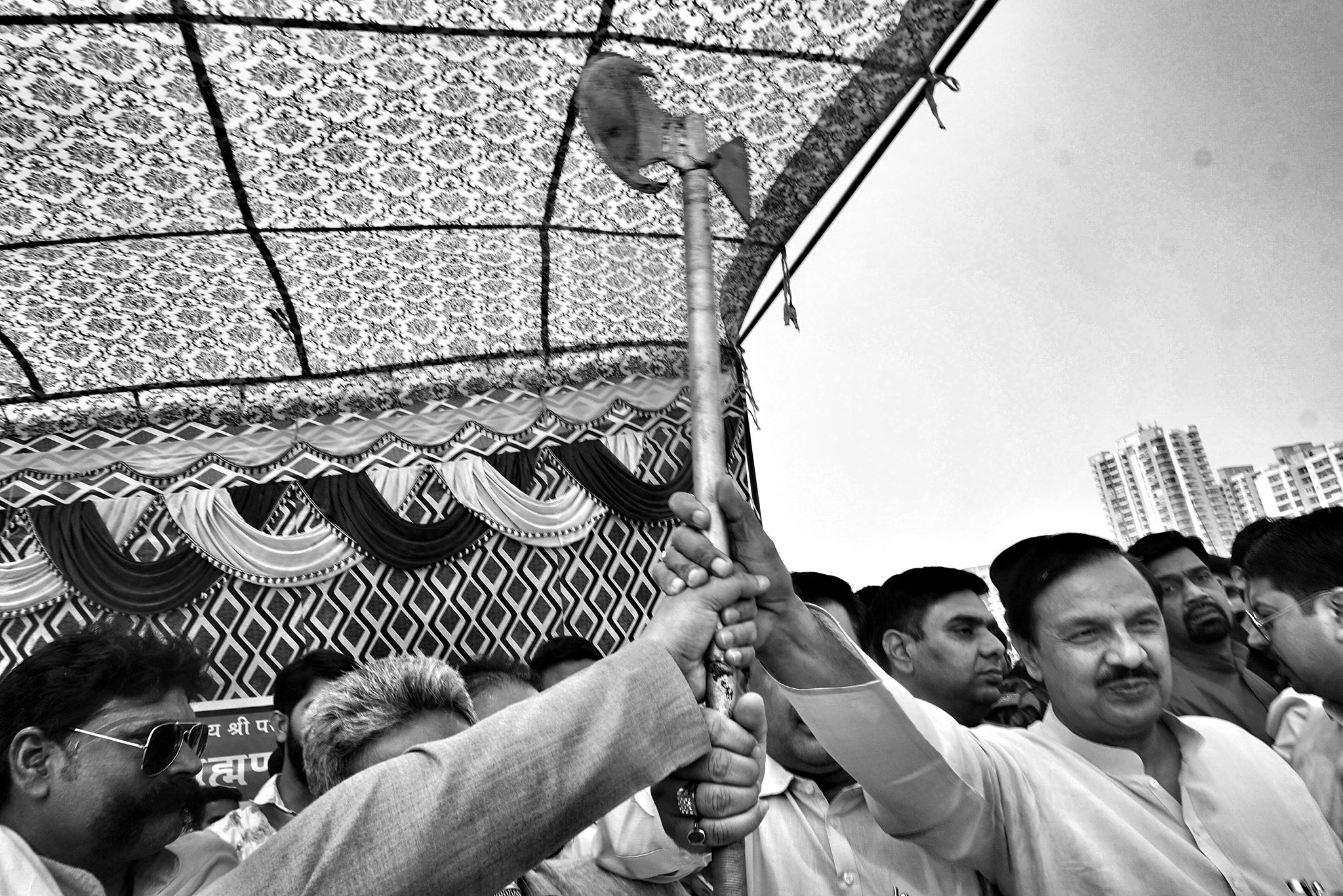 Union culture minister Mahesh Sharma flaunting an axe while flagging off a rally by the Brahmin Ekta Manch on Sunday. Credit: Shome Basu

Noida: Axes, hand guns and batons were flaunted at a rally by a Hindutva organisation called Brahmin Ekta Manch to showcase its strength. One day after Ambedkar Jayanti (April 14), and on the day protests are being held against the brutal rape and murder of an eight-year-old girl in Kathua, Jammu, and Unnao in Uttar Pradesh, this upper caste rally was full of motorbikes and SUVs fluttering with saffron flags.

Asked about their programme and why they were blocking roads and traffic, one of the participants boasted about a 4,000 year-old Hindu tradition and declared that to preserve it “they would go to any extent”.

Most of the participants belonged to the ‘upper caste’ Brahmin community, and the event was inaugurated by BJP leader and Union culture minister Mahesh Sharma, who happens to be the elected MP from Noida. With pride, he held aloft an axe and posed for a photograph.

The axe was the weapon that the mythical sage Parasuram used on his journey. An incarnation of Vishnu, Parasuram was a Brahmin and his credo was to rid the earth of evil.

Parasuram’s mythical birthday falls on April 18, but the Brahmin Ekta Manch chose to celebrate it on Sunday, April 15,  as they thought they could gather more supporters.

In the rally, handguns were openly flaunted, as were the axes. The images I shot reflect the changing idea of  religion among a section of upper caste Hindus. That this change is occurring at a time when upper caste groups are flaunting their muscle power against the minorities and Dalits, especially in North India, is not a coincidence.

According to the law,  no arms larger than 5 inches in dimension can be displayed in public, except when Sikhs carry a kripan/sword for religious reasons. But the display of axes and guns at the Noida event was done openly, that too in the presence of a Union minister and the police.

At the same venue where the Brahmin Ekta Manch was flexing its muscles and preparing to launch a Rath Yatra, a few hundred of men and women from Noida stood protesting an upcoming Solid Land Fill at Noida Sector 123.  Minister Sharma paid them no heed. 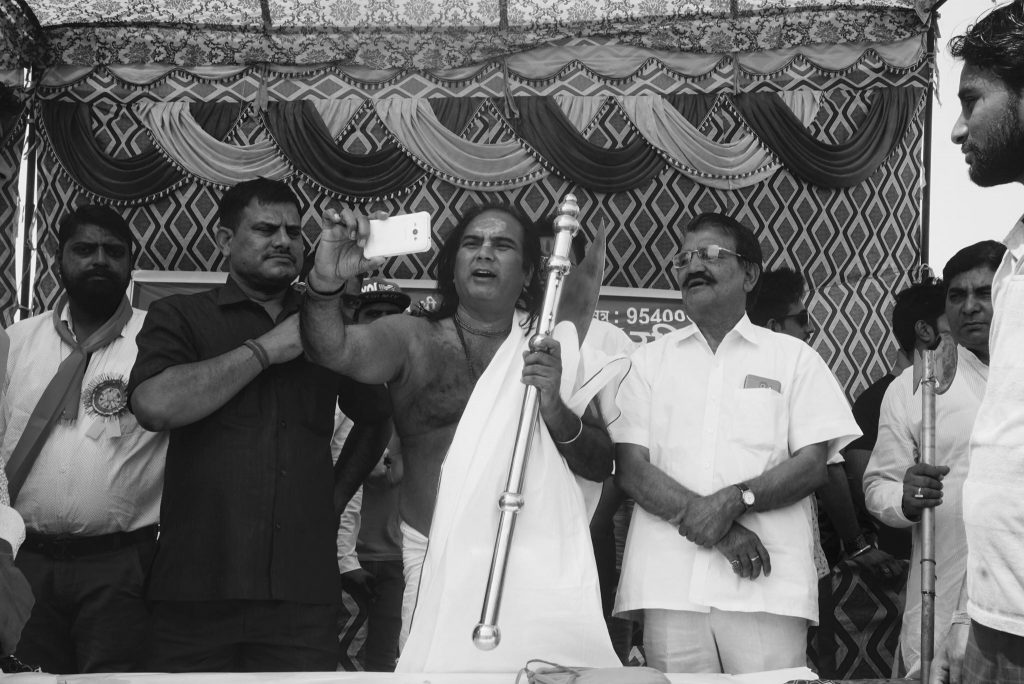 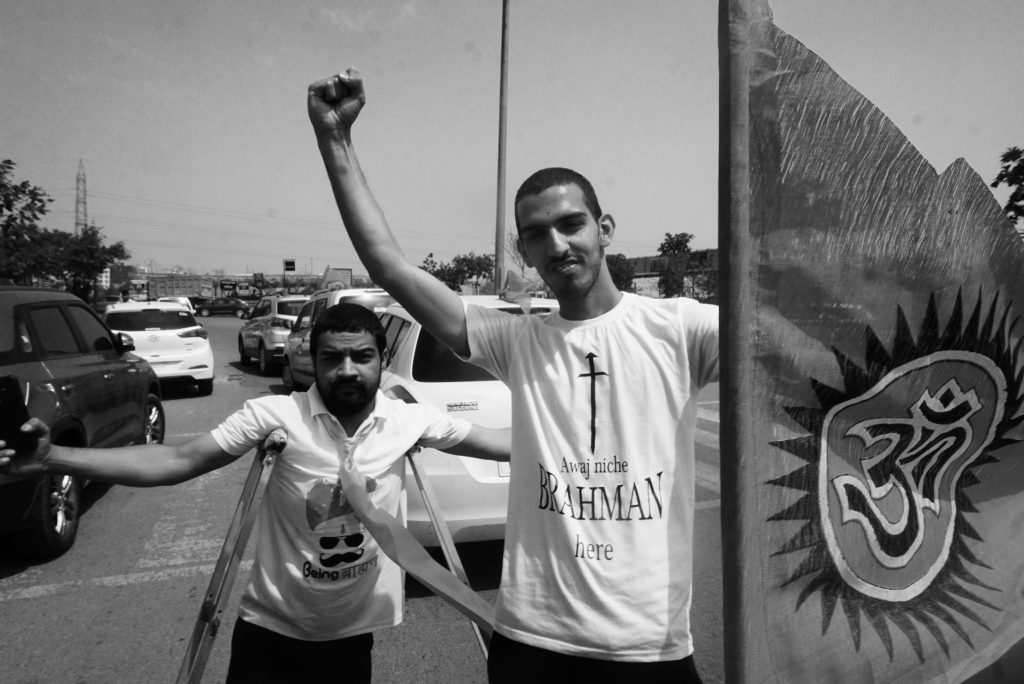 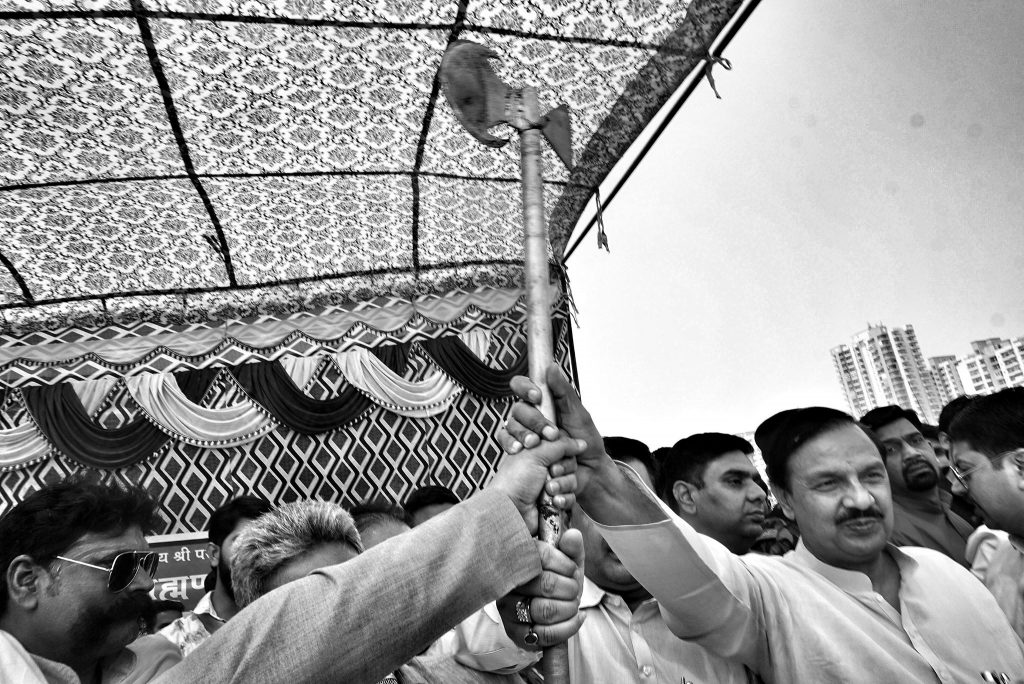 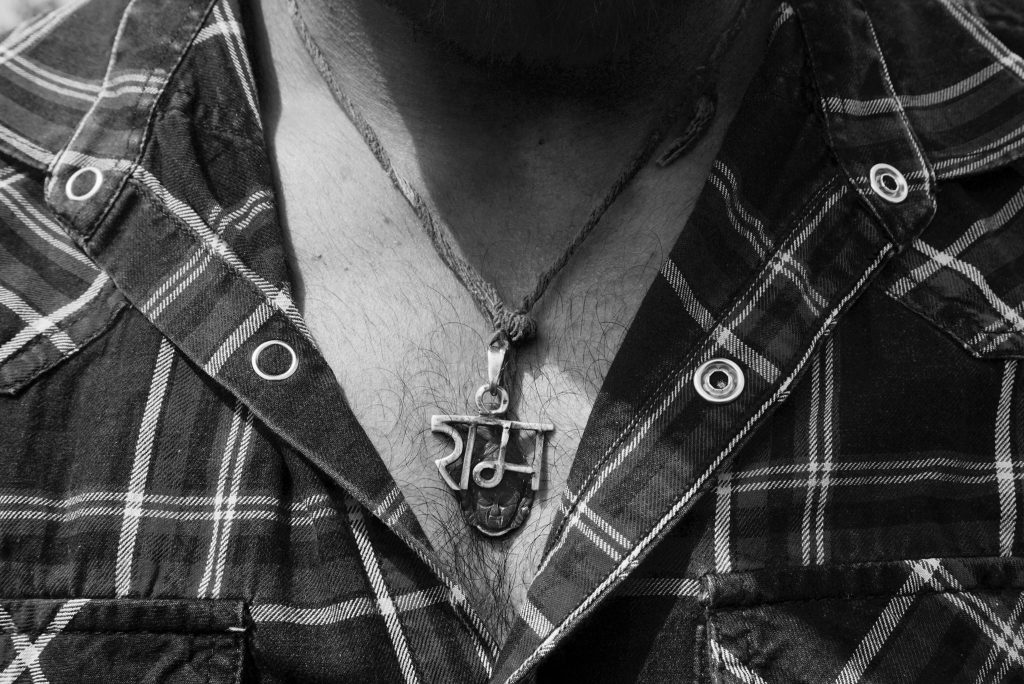 A Ram devotee with the name of his revered lord. Credit: Shome Basu 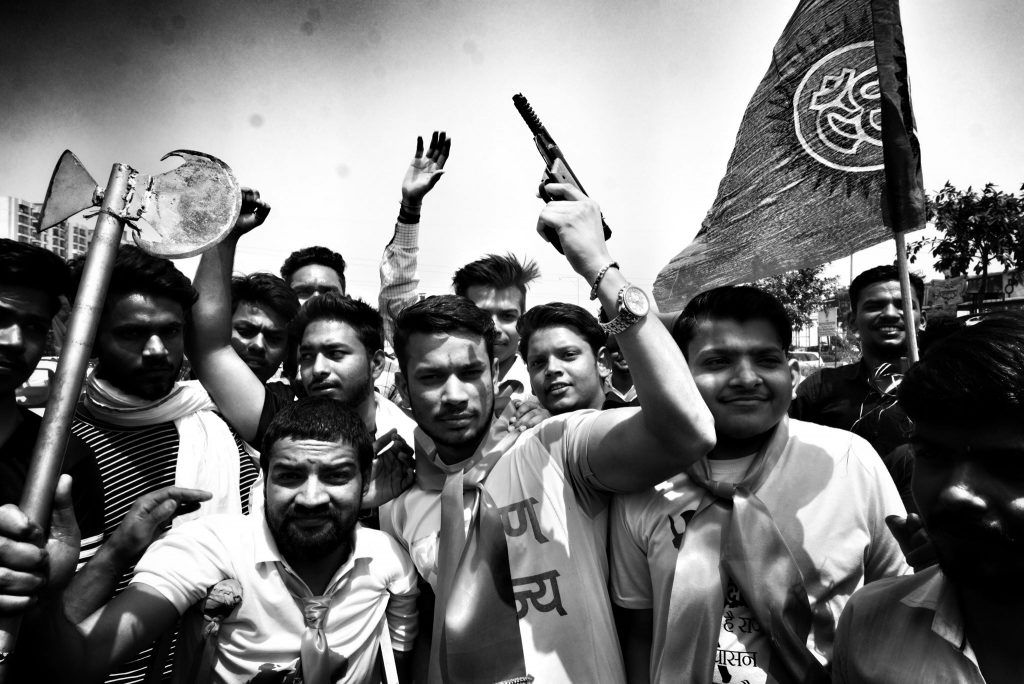 All dressed up but nowhere to go. Credit: Shome Basu 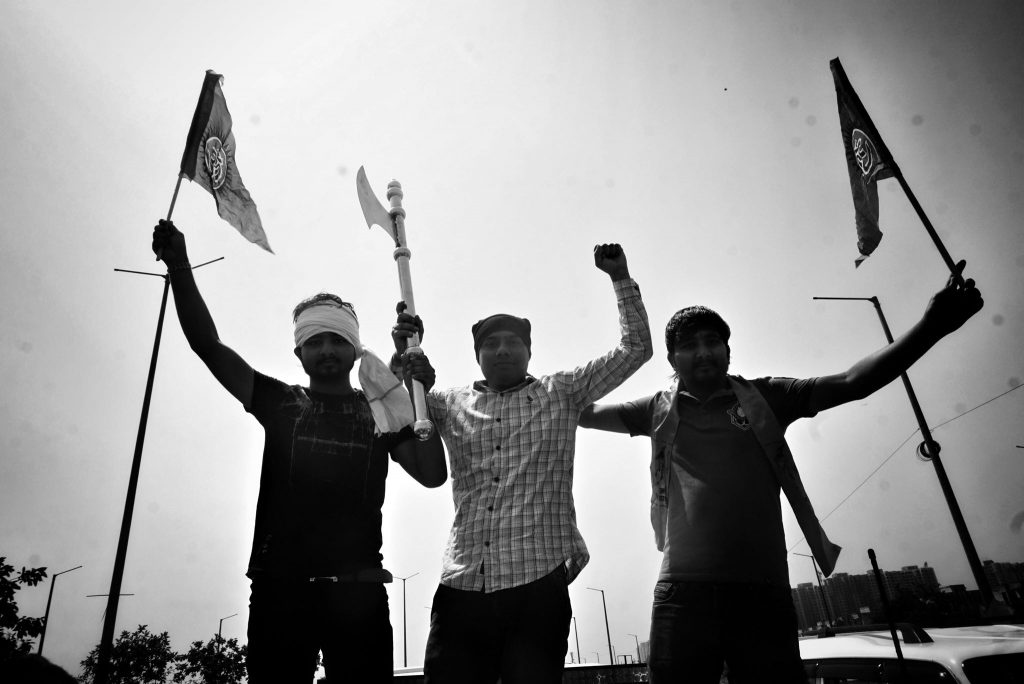 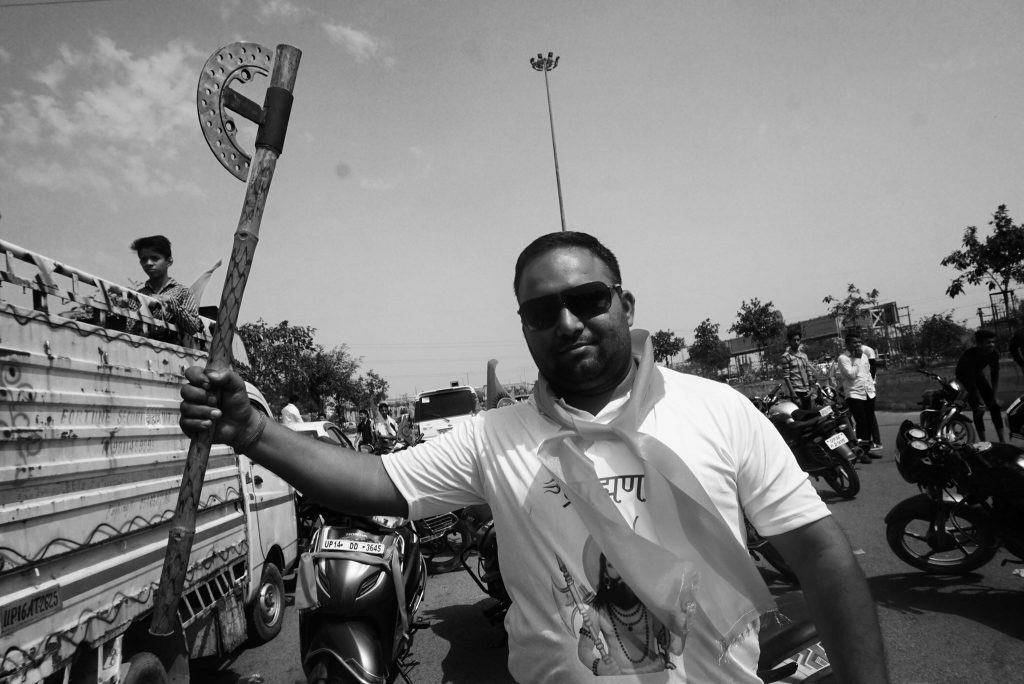 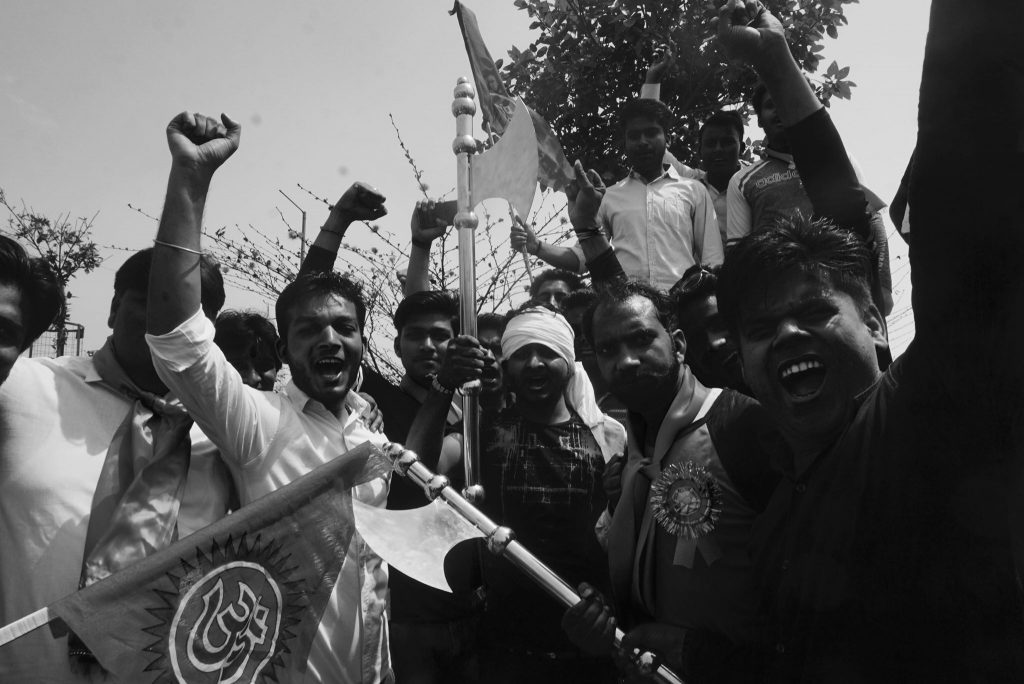 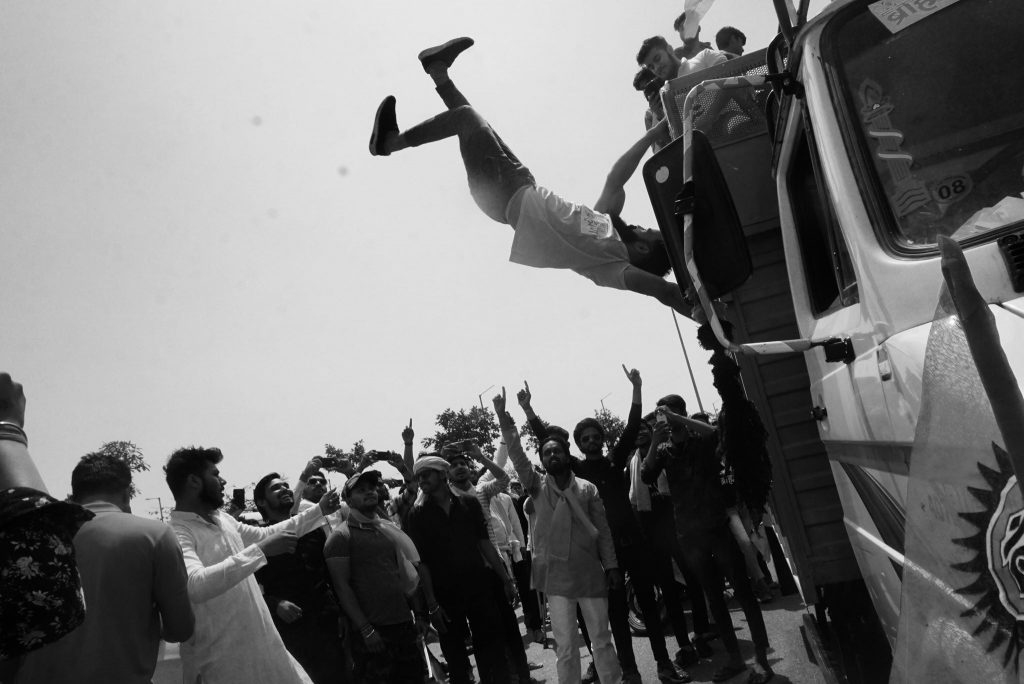 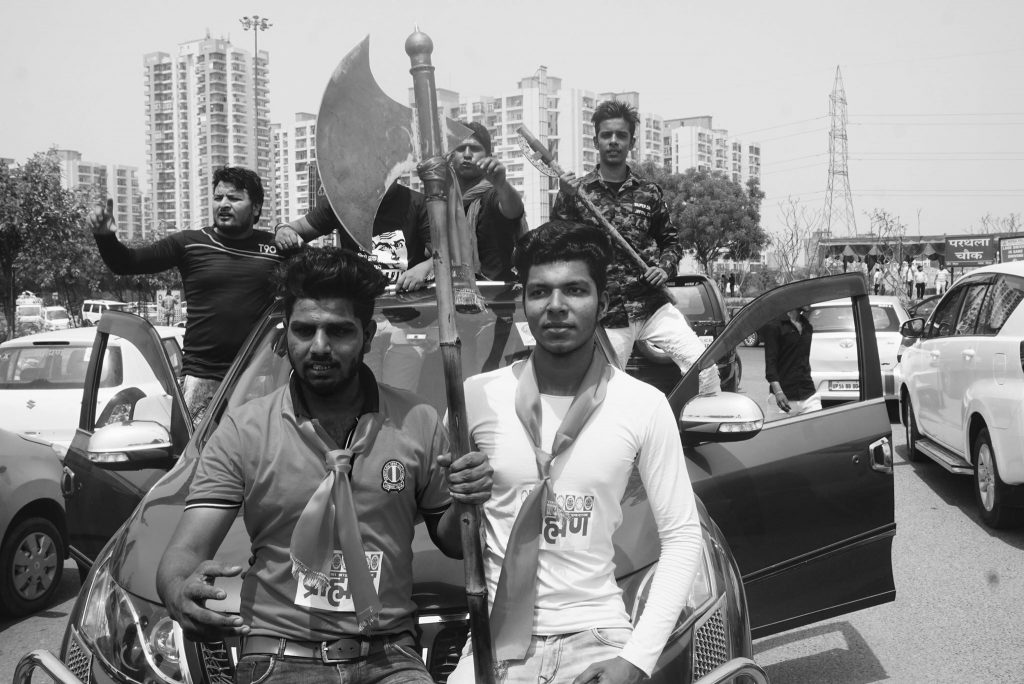 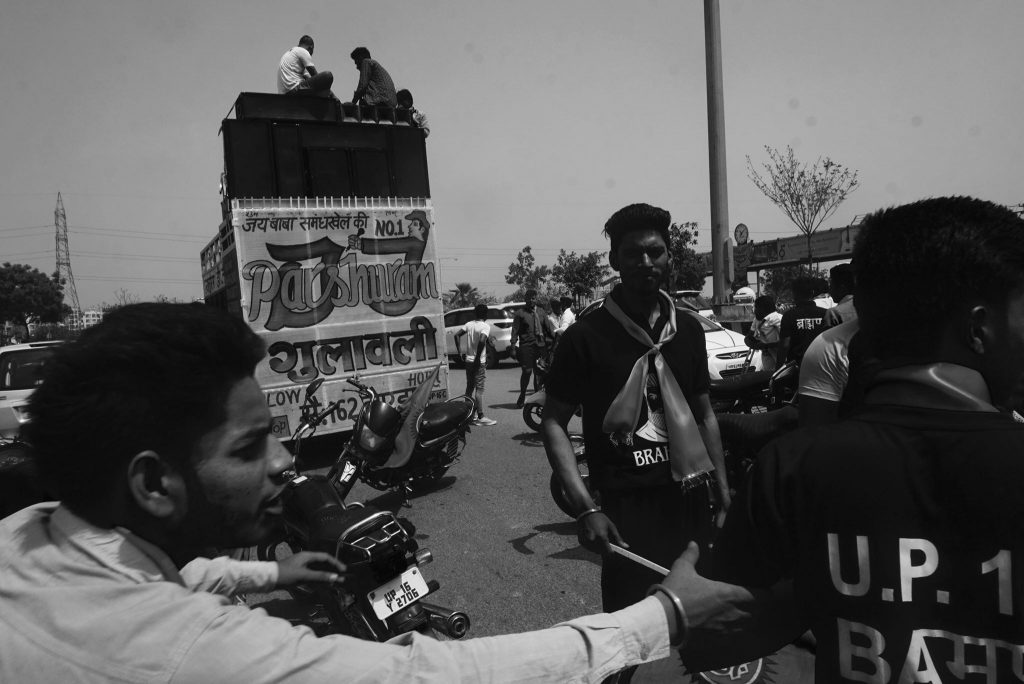 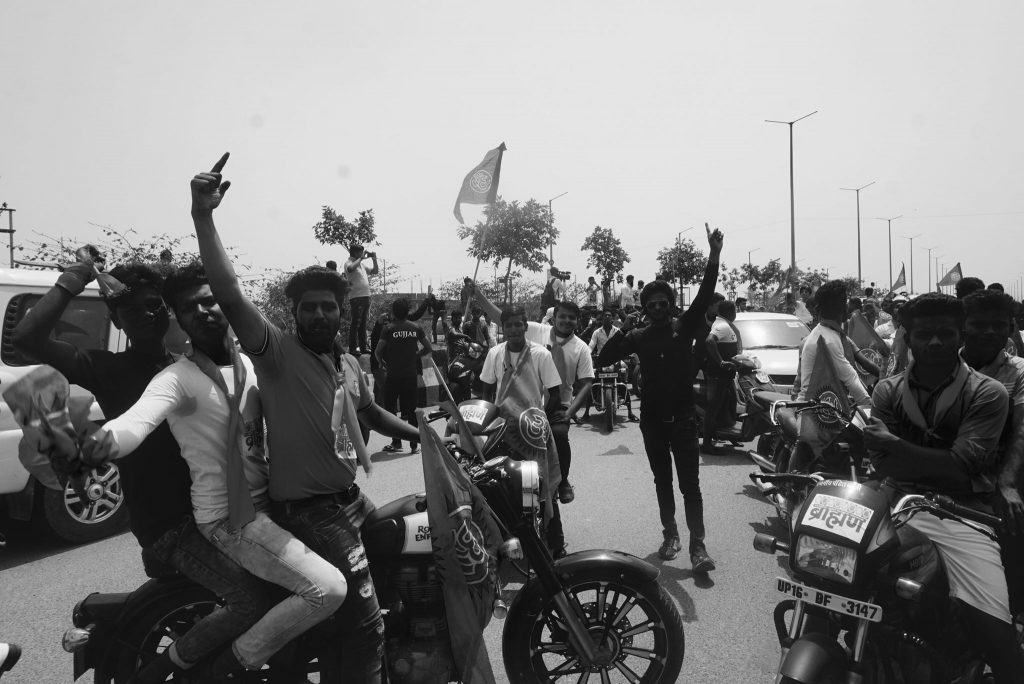 Getting ready for the yatra. Credit: Shome Basu 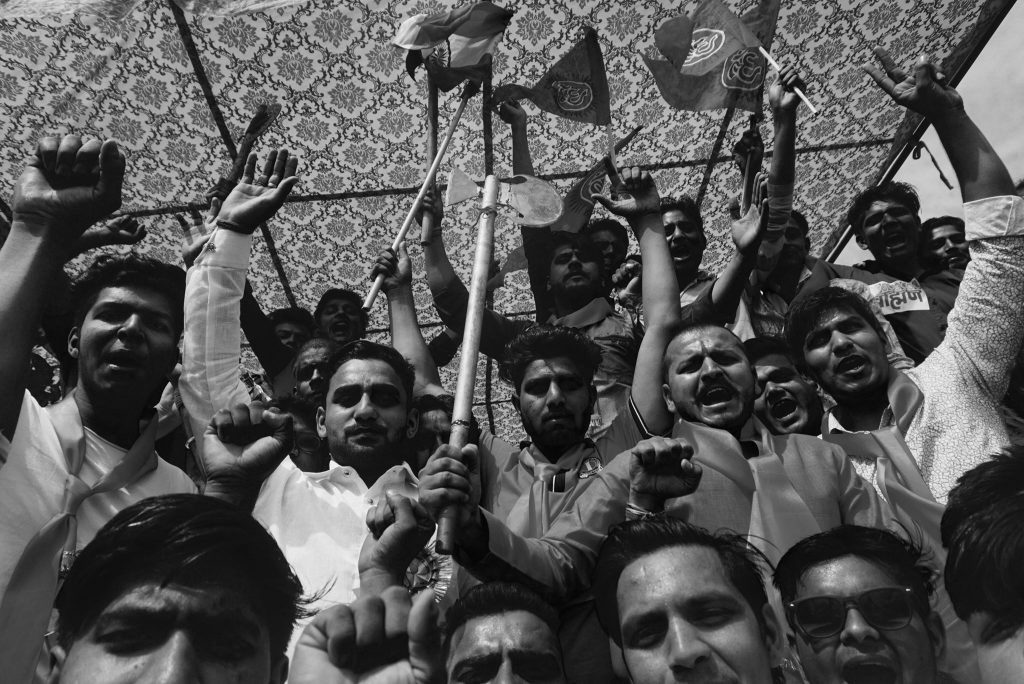 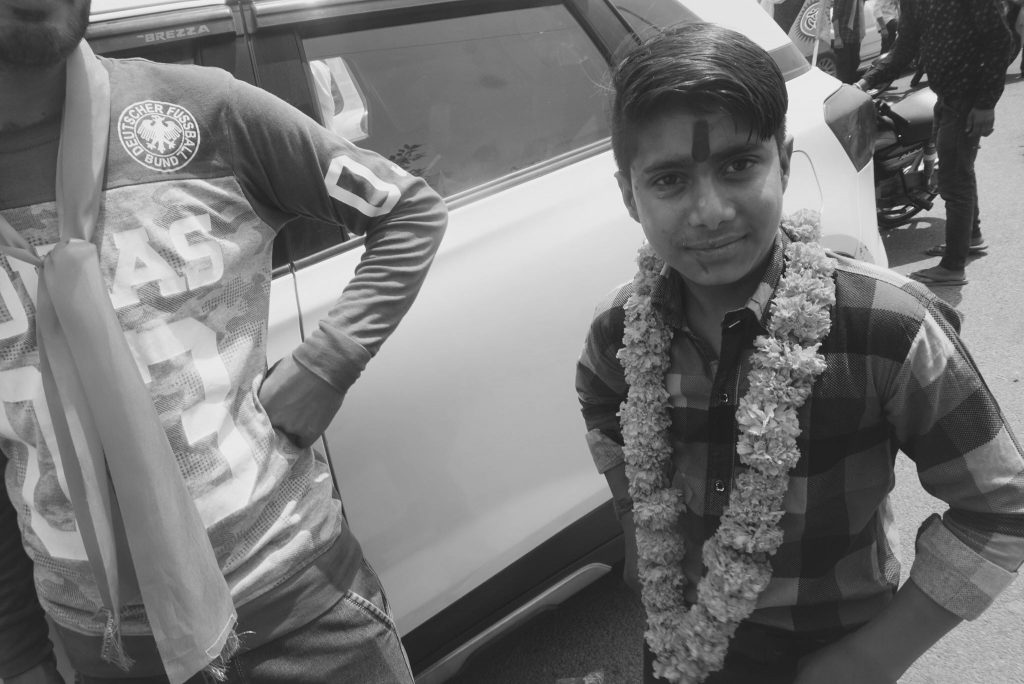 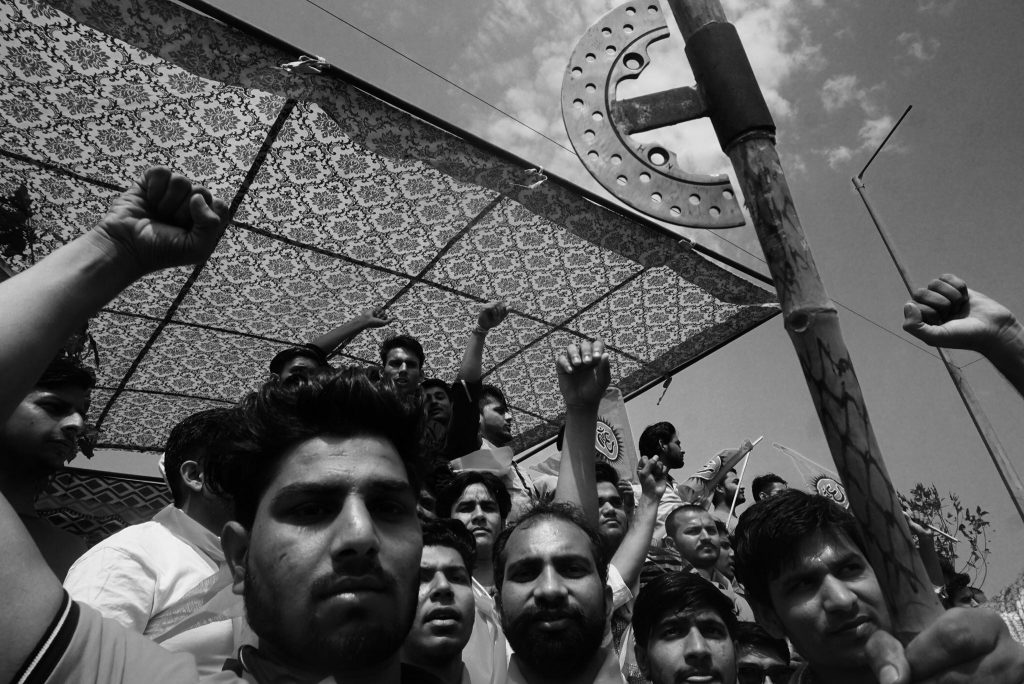 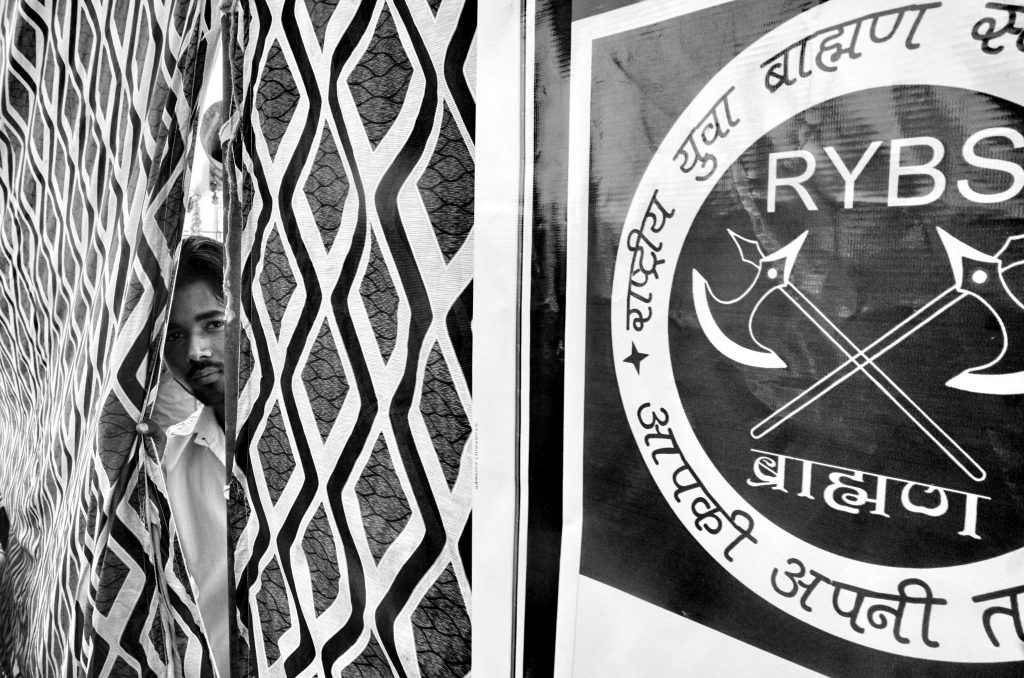 A last minute check before the show hits the road. Credit: Shome Basu 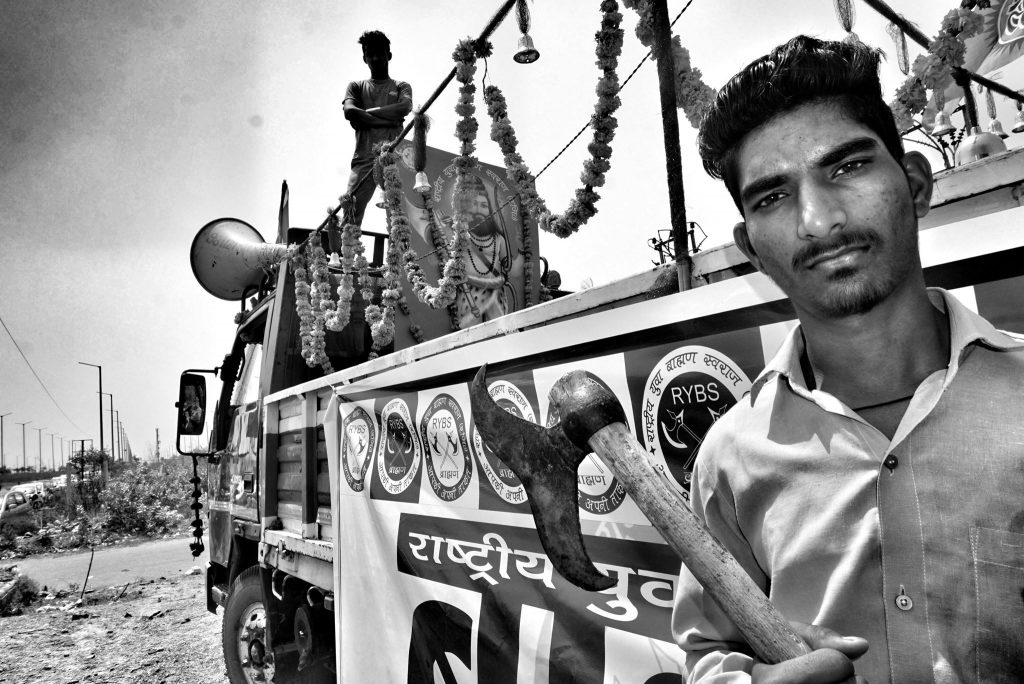 Parasuram, on board his rath. Credit: Shome Basu