The four Dalit households in Boolgarhi village say instances of discrimination and violence are a regular feature, but fear the attention that the case has received may worsen their condition. 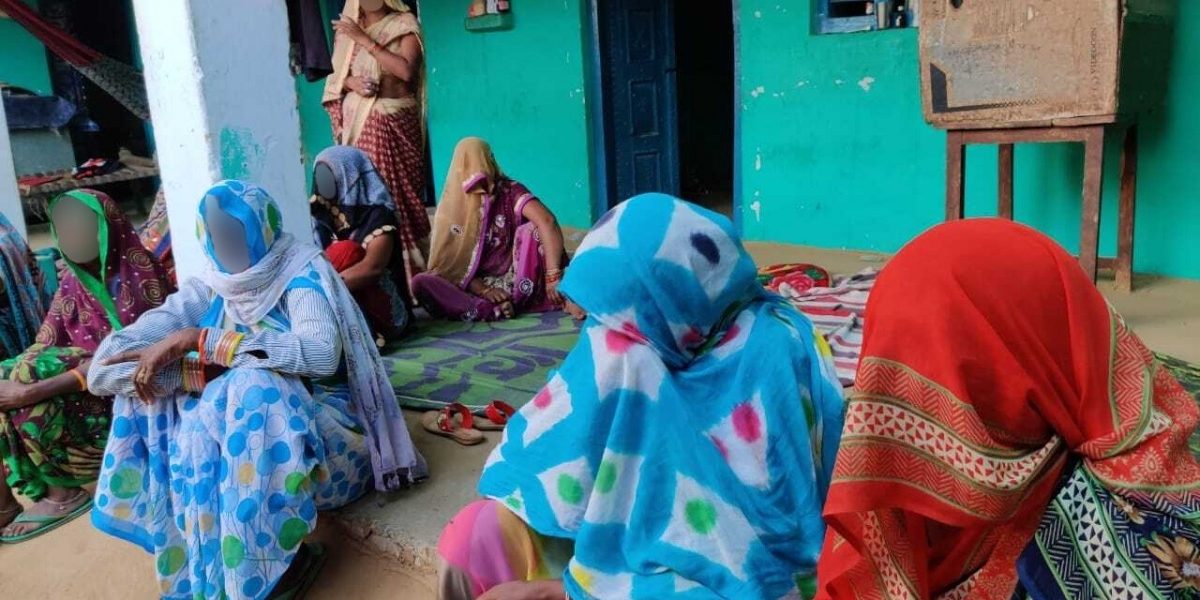 Boolgarhi, Hathras: Caste boundaries in the Boolgarhi village in Uttar Pradesh – where the horrific gangrape of a Dalit woman occurred on September 14 – are drawn clearly. Out of the several hundred households in the village, a majority are upper caste: about fifteen Brahmin households and about a hundred Thakur households. There are only four Dalit families in the village. And yes, they are all huddled together.

During the rains, sludge from the entire village collects outside the Dalit area, which they must clean by entering the drains. “There is a lot of inequality in the village. When we refuse to do their [upper caste people’s] dirty work, such as cleaning the drains – for which they do not even pay us adequately – we are thrashed,” says a relative of the victim.

The Dalit woman passed away on Tuesday due to injuries suffered during the assault. Those arrested for the crime were four upper caste Thakur men, Sandeep (20), his uncle Ravi (35) and their friends Luv Kush (23) and Ramu (26). Even before the latest incident of violence, Sandeep had allegedly harassed the victim so much that she would scarcely leave the house. 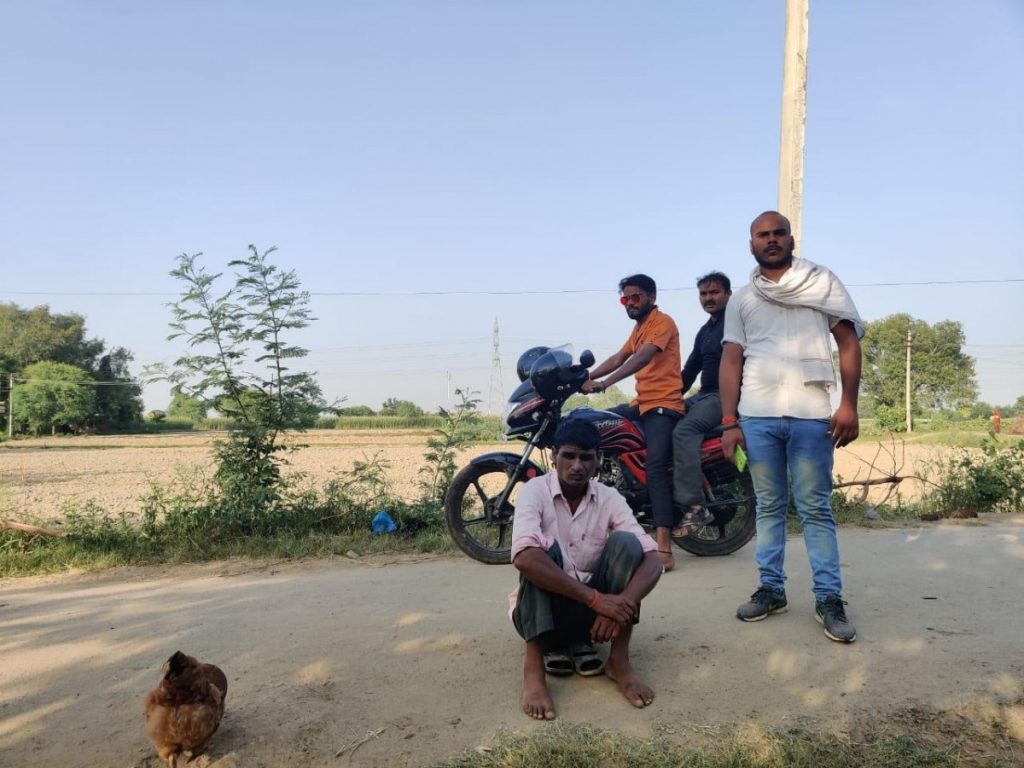 Not more than 100 metres away from the victim’s house is the house of a prominent Thakur family. The elderly man boasts of his three houses, all next to each other, but when asked about the gangrape, there is radio silence. He announces afterwards, “Don’t ask us any questions and we will treat you with utmost dignity and respect.”

After a few hours, the Thakur man seems willing to talk about the issue. His statements only reveal the privilege of the upper castes in the village. “Humein iss gaon me zyada kisi sey matlab nahin hai. Humein kucch pata hi nahin hai iss baare me, hum aapko kya batayein,” he insists. We [Thakurs] do not concern ourselves with people in the village too much. We do not even know anything; how do I tell you about it?

When asked about the safety of women in the village, he says, “If you come to the village at even 3 am in the morning, you will be well protected. It is very safe for women.”

These words are uttered even as a few metres away, the Hathras rape victim’s family is in mourning. The incident has shaken the family of six: her mother, father, two sisters and brothers. The victim’s elder brother says that even though caste-based discrimination exists in the village, this incident will forever create a rift between the Thakurs and the Dalits. He believes it will be difficult for them to live in this village from now onwards. 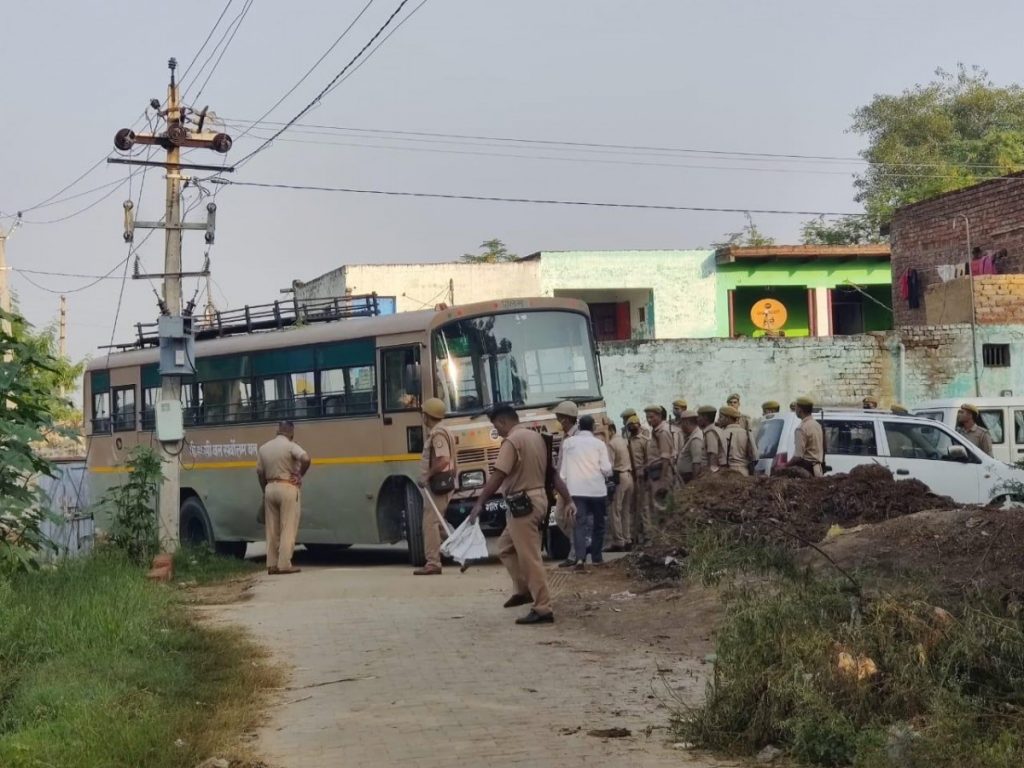 ‘Your touch has polluted my food’

In the house adjacent to the victim’s live Banbari and his wife, Anju Devi. They have four sons and one daughter, all very young, and are now worried for their daughter. They have been living in the village since they were born. “Khandani ghar hai humara (This is our ancestral home),” Banbari says.

“They [Thakurs] don’t shy away from violence. They show their dominance everywhere,” he says. He recalls an incident not too long ago. “One of my sons was playing on the streets, and a Thakur kid was passing by, carrying jaggery in a polythene packet. While my son was playing, his hand accidentally touched the polythene. All hell broke loose. The Thakur kid started shouting that his food had been ‘polluted’ by a Bhangi (a Dalit caste, often used as a pejorative term), about 30 Thakurs assembled to beat my kid up.”

Thankfully, the child was not harmed as his grandmother offered double the amount of money to buy fresh jaggery. “But imagine, 30 Thakur men arrived with sticks to beat up my young son, who was simply playing,” Banbari says.

Also Read: UP Police Locked Us Up, Didn’t Allow Us to See Body, Cremated Her at 3 am: Hathras Victim’s Family

Banbari’s wife, who was quiet all this while, speaks up. “They invite us to their functions to give us the extra food. They demarcate a space for us to sit on the floor, far away from the Brahmin and Thakur crowd. When they give us food, they drop it from a height, so as to not come in contact with us. The food sometimes even falls on the floor, and they expect us to eat that as well,” she says. 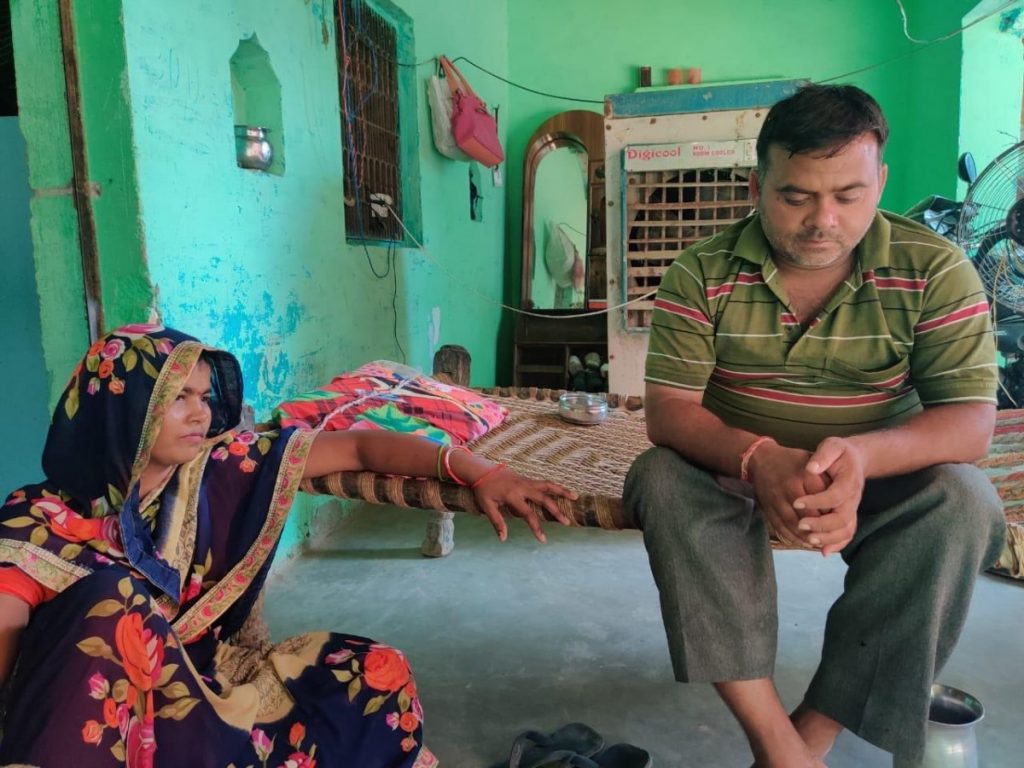 “The place they make us sit at is sometimes so dirty that we can’t even eat properly,” she says. “Hume chote log samjha jaata hai.” They consider us inferior. “Aur upar sey humein ganda maante hain, hum kucch choo dein toh wo bhi ganda ho jaata hai.” And on top of that, if we touch something, they believe that it gets polluted.

Banbari says that there is no way that the Dalits of the village can raise their voice against the Thakurs and Brahmins. “If we fight, we will only suffer,” he says. Dalits in the village are economically weak and also low in number. “There are so many more instances of violence almost breaking that we could narrate to you, but we don’t want to relive them. All we want is the safety of our kids,” Anju says.

The couple is not sure if things will ever change. “They will not, at least not in our lifetime,” they declare. They also say that the gangrape has forever changed the dynamics between the Dalits and the upper castes of the village.

When a finger was cut off

Santosh Kumar lives with his wife and three children – Preeti Kumari, Priya Kumari and Vikram Kumar. He is milking his cows, not bothered by the police presence and the mediapersons who have descended on the village.

Adjacent to his house is the victim’s house. “Yes, what happened was horrific, but not completely unexpected,” he says. His wife, Sabina Devi, says instances of violence are inevitable. “When upper castes and lower castes live together in a village, it is inevitable that such things will happen.” She says that she personally does not believe in caste or religious differences. Her parents had decided to name her Sabina – usually a Muslim name – as she was born on the day of Eid. “We try and keep ourselves in our own area, and do not engage much with them [the upper castes]. We try not to do anything that will anger them,” she says.

She recalls an incident that occurred over a decade ago. She says, “One of our relatives who lives here, his finger was cut off because he dared to raise his voice against them [the Thakurs]. Their cattle had entered his farm and when he objected to it, the Thakurs cut his finger off. A lot of violence also happened.” She says that a sickle was used to cut his finger off.

She recalls another incident which occurred recently. She recalls, “My younger son Sunny was just sitting somewhere in the village when some Thakur boys came and beat him up. They said only upper caste members can sit there. They were angry that he, an untouchable, dared to sit there.”

She added, “Humari baradari ke do-teen bachche aur baithe the wahan. Sabko gaaliyan di aur maara (Some more kids from our community were also sitting there. They were all abused and beaten up).” Sabina says that even though that land is not private property, the lines created by the upper caste villagers should be followed. 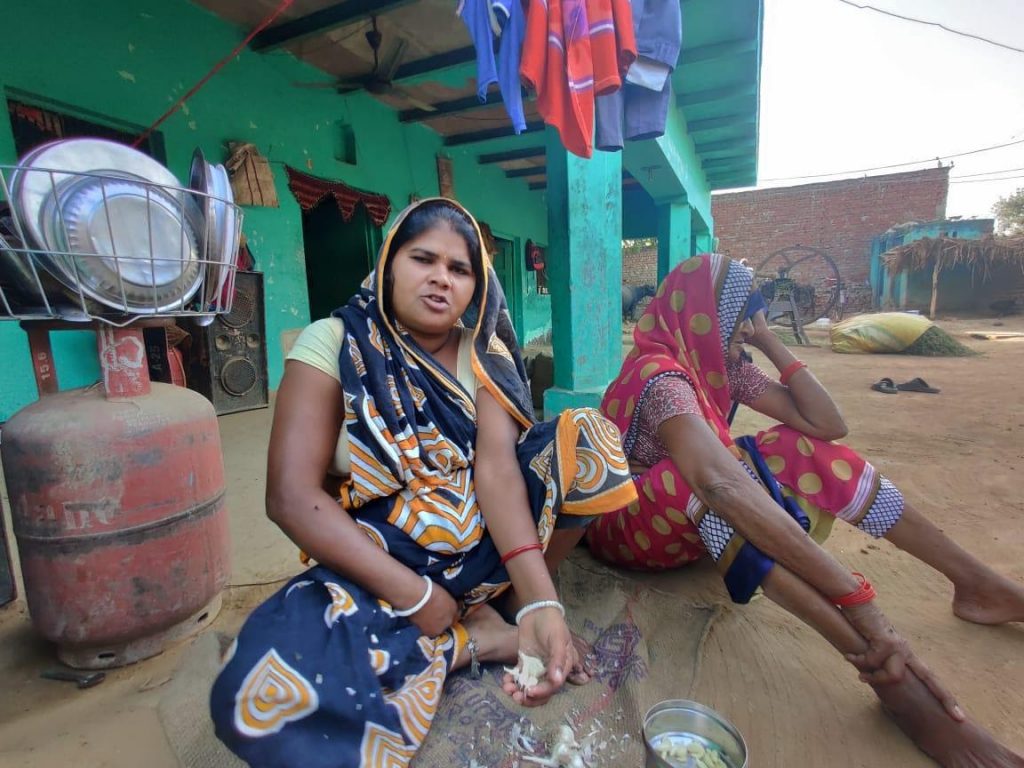 Beaten up for stepping into an upper caste person’s farms

Inderpal, a relative of the victim and the brother of the man whose finger was cut off by the Thakurs, lives in another house next to the victim’s. He says, “You have no idea with how much difficulty we are living here. If we had the option to leave the village, we would have left in a heartbeat. We would not live here. I was once brutally beaten up because I accidentally stepped foot on their farm,” he says.

While most of the Thakurs in the village have ample land and earn mainly through farming. The Dalits’ main source of income is their cattle. Keshav, the head of the last Dalit house in the village, says that even the young children of the Thakur households address him by his name and do not show him any respect. “Kabhi naam sey bulate hain, badtameezi karte hai, kabhi Bhangi bulate hain. Tu tadak karke baat karte hain. (They call us by our names, disrespect us. Sometimes they call us Bhangi).”

He lives with his wife and three daughters in the village and says that he is wary of engaging with the upper caste villagers. He recalls, “Once, I accidentally touched a Thakur man. He made a fuss, called me a Bhangi and Chamar (another Dalit caste, also used as a pejorative term). He said he was polluted and immediately went to ‘purify’ himself. But this is normal… after all, we are lower caste people.” Even as the victim’s mother mourns the loss of her 19-year-old daughter, she is angry and says that her daughter’s only fault was that she was born a Dalit in a village dominated by the Thakurs. The latter enjoy political, geographic and economic influence in the state.

The Dalit families are apprehensive of the attention that the Hathras case has received in the media and among political parties. The family of the victim fear that they will continue to be a target for the upper caste villagers and face their wrath. “Our daughter’s rape has laid bare the caste inequality and the discrimination that the Thakurs practice in this village. Because of this, we are not safe. We must be given security, or we will have to leave this village for good,” says the victim’s father.