“They are so desperate that in the temples where we worship, the religious leader and the priests have been asking us to talk our families and relatives into voting for BJP.” 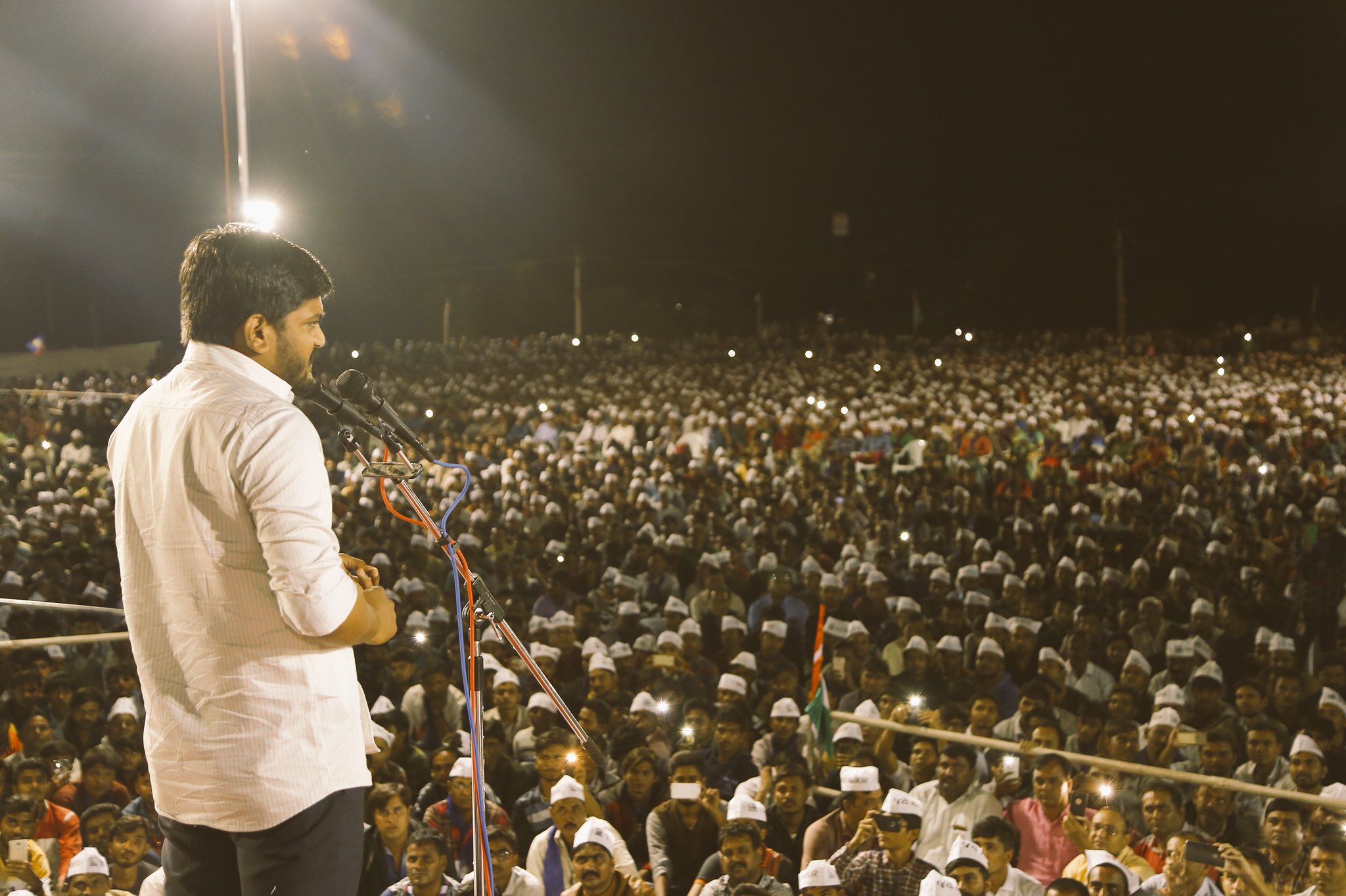 In a public ground at the border of Mehsana and Patan districts of Northern Gujarat, there was at least a half a kilometre-long line of cars, buses and tempos parked on both sides of the highway. About one lakh people – mostly Patidars – had gathered, and more kept coming, eagerly waiting for Hardik Patel, who was to speak at a public meeting there on December 10. All of them were very angry with the Bharatiya Janata Party.

Hardik has been barred from entering Mehsana, ever since the district had been the epicentre of the Patidar agitation in 2015.

“He cannot come to Mehsana but we can travel wherever he is,” says Sailesh Patel, a 45-year-old Patidar from Vadnagar, Mehsana, the home town of Prime Minister Narendra Modi.

“Congress started the 108 emergency services and BJP is taking credit for it now. I was a worker in the 108 services until they terminated me. They terminated 70 others with me. Later I filed an RTI to know how much loss the company is incurring that it had to fire so many employees and I am still waiting for a reply,” says an angry Sailesh Patel.

“They are so desperate that in the temples where we worship, the religious leader and the priests have been asking us to talk our families and relatives into voting for BJP,” says a Patidar from Bandu village in Mehsana district who now lives in the US.

“My village has a population of about 14,000. The village has the maximum number of NRIs who have been supporting BJP even from abroad yet my village public health centre doesn’t have a full time doctor,” he says, refusing to disclose his name.

“In my village it is only the people of Choudhary caste who have got jobs through the Gujarat Public Service Commission in 2015. There are cases where three members of a family have got jobs at once owing to their closeness with BJP leader Shankar Choudhary,” says Manilal Patel of Multhania village in Mehsana.

Mehsana district has seven assembly seats. In the 2012 elections, BJP had won five seats while two seats went to the Congress. The most heavyweight candidate that the BJP has fielded in this district is Nitin Patel from the Mehsana city constituency.

The BJP strongman, a Patidar, is from Visnagar – the town that is also home to Hardik and Alpesh Thakor. Nitin Patel was rumoured to take over as chief minister after the resignation of Anandiben Patel in the wake of the Patidar agitation, but believed to be close to Anandiben, who was at daggers drawn with Amit Shah, took charge as deputy minister to chief minister Vijay Rupani.

Nitin Patel will face Congress candidate Jivabhai Patel from Mehsana constituency, a local Patidar leader who was member of parliament in 2004. However, apart from the candidates from the two major parties, there are 32 other candidates contesting from the constituency. 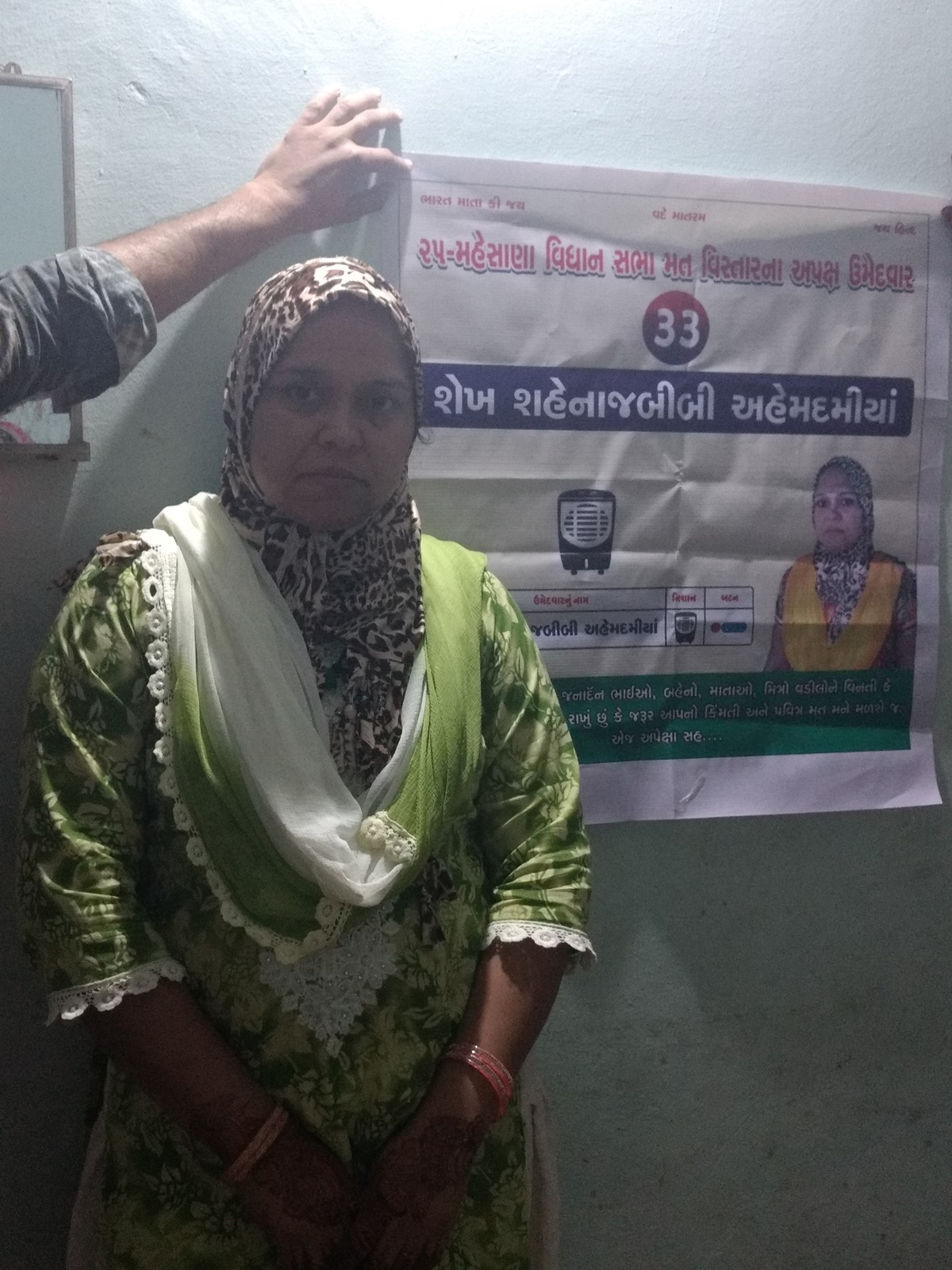 Shehnazbibi, independent candidate, at her residence in Kasba, an urban slum and a Muslim ghetto. Credit: Damayantee Dhar

“I have studied till class five. I am associated with the Mahila Samiti of the area and I help women get loans from local agents and then help them set up small businesses, like a beauty parlour, that they can run from home. People in the area, especially women, know me,” says Shehnazbibi Ahmediya, an independent candidate, who is contesting elections for the first time.

When asked how she is filling her campaign reports to the state election commission, she said she did not know anything about it. “I have an agent who filled and deposited my form. He helped me with all the electoral procedures and even to print my banner and pamphlets,” she said, refusing to disclose the agent’s name.

Notably, the area has about 6,000 Muslims voters who are all Congress supporters.

“There is another independent candidate from the same society. His name is Sikandarbhai Malek. He is more famous than Shenajbibi,” said Abdul, a resident of Kasba, adding, “Here people mostly vote for Congress.” 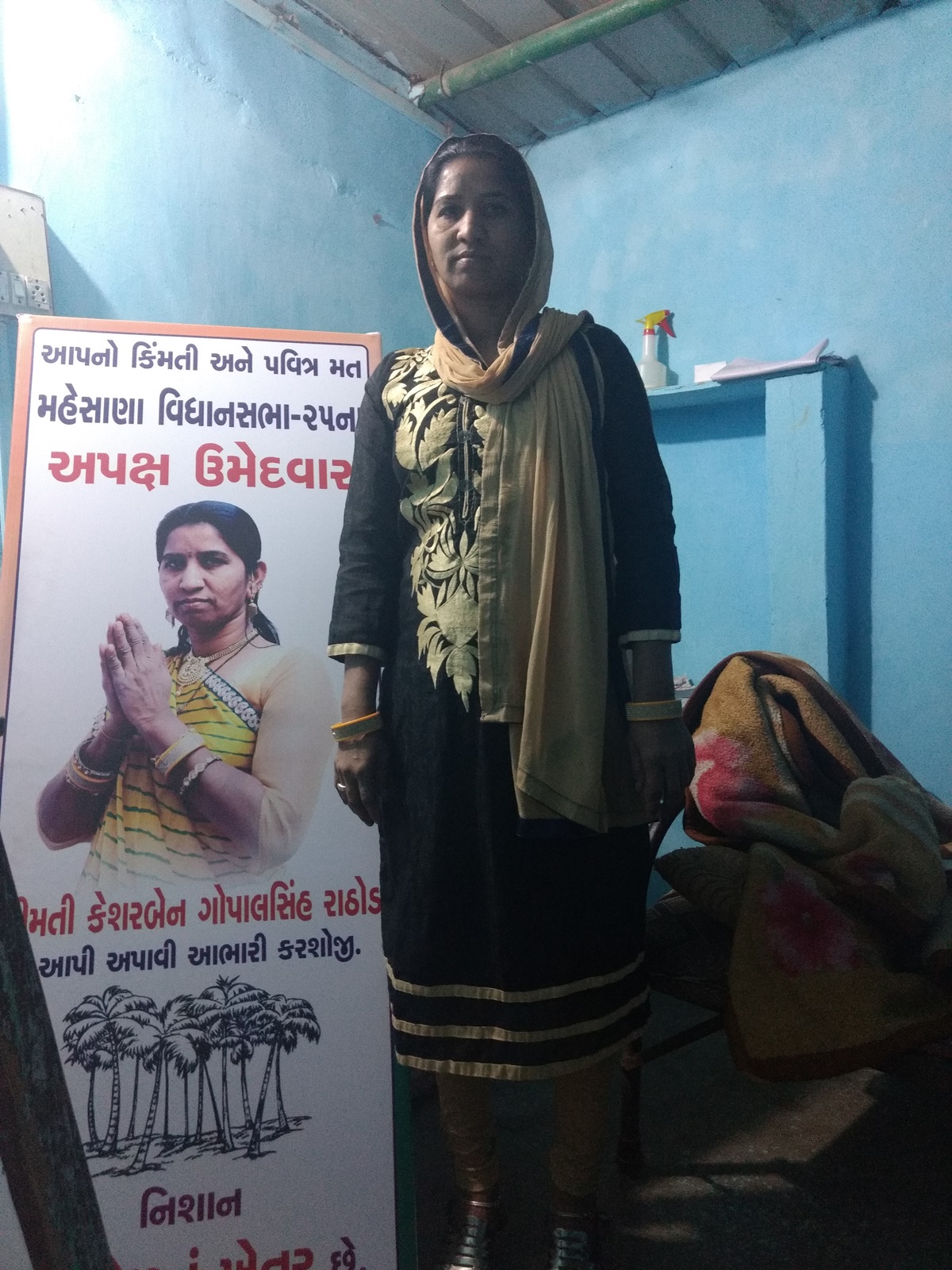 Kesarben, an independent candidate, at her house in Mehsana. Credit: Damayantee Dhar

“I have an agent who filled my form and helped me with all the electoral processes,” she said.

When asked the name of her agent, Kesarben said, “I forgot his name.”

The constituency has 2.57 lakh voters out of whom about 52,000 are Patidars, 40,000 Thakors, 26,000 Prajapati, and about 12,500 Muslims. Thakors and Muslims have been loyal vote banks of the Congress since the time Madhavsinh Solanki brought the vote bank together under the KHAM (Kshatriya, Harijan, Adivasi and Muslim) theory.

“These are all bogus candidates to divide the vote of Congress. Nitin Patel won’t win this time, so the BJP is desperate. The party had just two Lok Sabha seats in whole country in 1984 and one was Mehsana – we brought BJP to power. Modi stepped on our shoulders and became the chief minister and then prime minister. Our boys were the party’s youth cadre. The Patel’s not only voted for BJP and helped the party financially but also did its dirty work,” a 65-year-old Patidar from Mehsana city constituency told The Wire.

“We used to pay Rs 200 per person to being people to Modi’s public meetings. You think the crowd at Modi’s rallies are all his supporters?” says Bharatbhai Patel of Sander village in Patan, who had come to attend Hardik’s rally.

In 2012, Nitin Patel had won from Mehsana by a margin of 24,205 votes. Noticeably, the Congress candidate Jivabhai, who has been fielded against Nitin Patel, has defeated him once by a margin of 14,511 votes in the Lok Sabha electiosn of 2004 when he became the MP from the Mehsana Lok Sabha seat.

Reportedly, about 50,000 Patidar Anamat Andolan Samiti (PAAS) volunteers have been active in six districts of North Gujarat and they have been urging people not to vote for BJP this election. After the first phase of polls, 10,000 more volunteers from Saurahstra and South Gujarat have also joined them in North Gujarat.

“North Gujarat is going to be difficult for us this time. There is a lot of anger amongst Patels. We expect about 50% of the Patidars will not vote for us. But we are sure they will not vote for Congress either. In Patidar-dominated constituencies like Varachha, less people have voted. We expect the number of voters to go down in North Gujarat too, as many Patidars would rather not vote,” says an RSS member who has been associated with the organisation for 37 years.

“Besides, Modi has been conducting closed door meetings with Patidars. A lot of anger has been pacified after the series of meetings,” he adds.