Dalit Villagers Wanted to Present a Coin to the President. The State Stopped Them.

Thousands of Dalit people funded a symbolic gesture of gifting the Indian parliament a 10-tonne coin calling for the realisation of Ambedkar's dream of untouchability-free India. They were stopped at Haryana's borders. 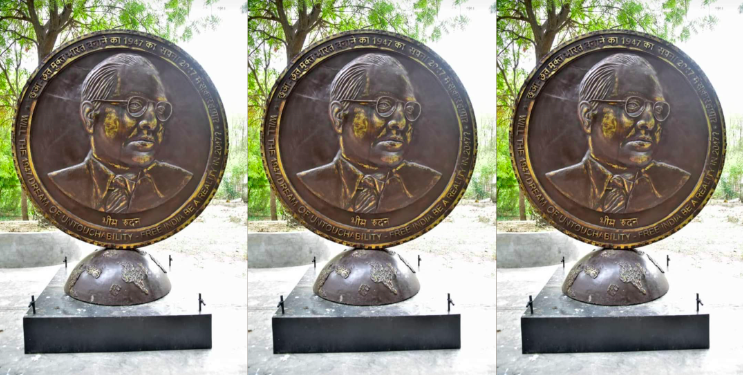 The 10-tonne coin with an engraving of Dr BR Ambedkar and the words 'Bhim Rudan'. Photo: Twitter

I was standing at Haryana’s Rewari border with two lifelong friends Martin Macwan and Gagan Sethi. Before us was a crowd of people, sisters and brothers of the Dalit community, who had travelled by road all the way from Ahmedabad to present an 10 tonne sikka (coin) to the President of India.

The coin was mounted on a truck, with an engraving of Baba Sahib Ambedkar and the words ‘Bhim Rudan‘ (‘Agony of Bhim’). It was encircled with a line-engraving: ‘Will the 1947 dream of an untouchability-free India become a reality in 2047?’ Behind it was a beautiful sculpture of Baba Saheb made by a 14-year-old artist. These intrepid group of 375 people – 100 women, four children and 270 men – had already been at the Alwar-Rewari border for 16 hours when we got there. They were stopped there and not allowed to proceed.

One thousand police with jammers, water cannon and Vajra Vahans (an anti-riot vehicle of Delhi Police) were present there. Their order to stop the Dalit marchers came via a letter from Ministry of Home Affairs. ‘Stop their entry into Haryana and thereby their entry into Delhi,’ it said.

Preparations for this had begun two years ago. Women, men, boys and girls from tiny villages had donated coins and brass for the giant coin. The hub of activity was Dalit Shakti Kendra (DSK) in Sanand which is 40 kms from Ahmedabad. An old woman arrived at the DSK gate with a brass bucket. “This is from my dahej; it is all I have to give,” she said.

The brass over 1000 KG being melted to mint the coin. The program BHIM RUDAN will present this coin of 2047 MM diameter will be presented to Indian Parliament on 14th August 2022 pic.twitter.com/yv8Pts9gWn

There were many similar stories.

Two months ago, the DSK had written to the authorities for permission. They had explained their visit; it was not to ask for anything but to give something to the Parliament of India through the President of India. In addition to the coin, they were carrying Rs 20 lakh in coins of one or two rupees all neatly packed, all marked in small bundles. The Rs 20 lakh had been collected from almost 10 lakh people. The donations and the cost of travel and food, all came from people of this vast country.

Four buses and six trucks started out from Ahmedabad and came through Mehsana, Patan, Banaskantha, Phalodi, and Ajmer to Alwar, which is where the state stepped in and said ‘enough’.

More than 5,000 people were going to meet on August 8, 2022, at Ambedkar Bhawan in Delhi. Twelve hundred people from Punjab’s Phillaur were waiting for them at the Bangla Saheb Gurudwara.

They were ordered by the state not to step out of the precincts.

Hearing her, tears welled my eyes and I found myself shouting “Jai Bhim” with the others. Listening quietly was Mangla Ram from the village Farodi Baap who had fed 400 Dalits from his limited means.

For me and for many in this country, this a period of mourning.

Today is Muharrum, the day of the martyrdom of Imam Husain, grandson of the Prophet, who confronted the might of a massive state with his ‘army’ of 72 family and friends, including 80-year-olds and a six-month-old child. In Karbala, a place in Iraq, a confrontation took place. The Imam and his small band was killed by thousands of mercenaries of the despot tyrant Yezid. And then? Under the leadership of the Prophet’s grand daughter Hazrat Zainab, the mighty empire was routed by a massive uprising of ordinary people. This is recorded history.

This valiant band of Dalits reminded me of this classic instance of the power of Truth over Falsehood.

From this ‘army’ of Dalits, it appears as if a new beginning is on the horizon. A thousand policemen and women with water canon and Vajra Vahans is a clear indication that the state is now dead scared. Muslims, Sikhs and Hindus have all converged on the border and it no longer remains only a Dalit cause. It is now a cause for people across all communities, all castes, and all classes – a united front against a repressive regime which is trampling all over the rights given by the constitution.