The incident is the third such attack on Dalits in Gujarat since September 25. 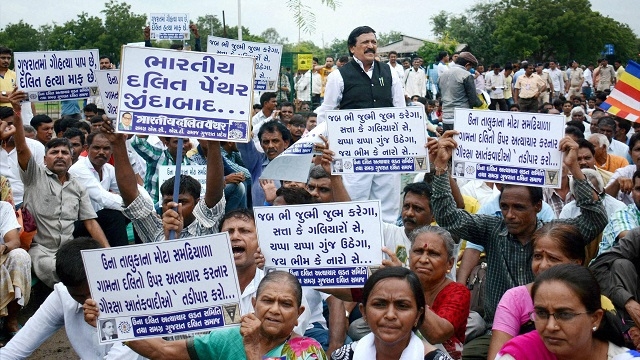 A previous protest by Dalits in Gujarat. Credit: PTI

New Delhi: Members of the upper-caste Darbar community in a Gujarat village allegedly stabbed a 17-year-old Dalit boy on the evening of October 3 for sporting a moustache. The alleged attack took place in Limbodara, a village in Gandhinagar disctrict where other similar incidents have occurred over the last few days, Indian Express reported.

The attack on 17-year-old Digant Maheira occurred just days after a Dalit youth was killed allegedly by upper caste men in a village in Anand for watching garba at a temple.

The most recent attack prompted a group of about 300 Dalit men to use a logo of a twirled moustache with a crow below it along with the words ‘Mr Dalit’ as their display picture on WhatsApp. The teenager was attacked at around 5:30 pm on Tuesday while he was returning from school, hours before which he had told Indian Express that on September 25 he had been assaulted while he was with his cousin Piyush Parmar, who was attacked for sporting a moustache.

An FIR was registered on September 27 at the Kalol police station under provisions of the Scheduled Castes and Scheduled Tribes (Prevention of Atrocities) Act.

“He is in pain, he received seven stitches. He was attacked with a blade. We have no idea who the two men were. He came home running with a bleeding back. We rushed him to the Civil Hospital in Gandhinagar,” the boy’s elder sister told Indian Express.

“The first time he was beaten, we did not file an FIR because he is still in school and we thought it could affect his future. But this is too much. We are not safe in our own village,” Kajal said.

According to Indian Express, the attack on his cousin too was allegedly carried out by Darbars.

According to the teenager’s uncle, his nephew was attacked because Parmar had earlier lodged an FIR against the upper caste men.

“Digant was present when Piyush was thrashed. Today (October 3), two men, who were wearing masks, intercepted Digant when he was returning home after giving his exam. The bikers told Digant that they have received Rs 1.5 lakh to attack those who had lodged the FIR,” Kirit alleged.

“Before Digant could understand anything, one of them attacked him with a blade and made several cuts on his back.”

Virendrasingh Yadav, the Gandhinagar superintendent of police, said that an FIR had been lodged in relation to the most recent attack and the matter is being looked into to ensure that there was no bias. “The boy was attacked with a blade by two men on a bike who had covered their faces. When we investigated in the village, we were surprised that those nearest to the place of the incident did not hear any scream. We will make sure that we investigate the matter thoroughly,” he added.

On September 29, another Dalit, 30-year-old Krunal Maheria, of the same village had alleged in his complaint that he was assaulted by some Rajput men for “sporting a moustache”. An FIR was lodged the following day.

Dalit activists in the state have called a protest meet today (October 4) outside the Vidhan Sabha.