After the brutal assault on the professor, he was promptly arrested by the local police and an FIR filed against him. 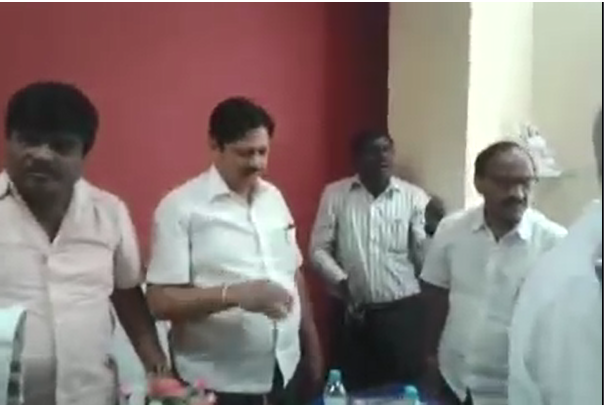 Professor Waghmare (second from right) who was allegedly beaten up for forwarding a WhatsApp post.

Pune: On March 15, a Dalit professor in Khopoli in Maharashtra was badly beaten by a mob for forwarding a WhatsApp message and subsequently suspended from his job. The professor claims that the WhatsApp forward may be just an excuse to remove him from his job and a fact-finding report seems to endorse his claim.

“I have been facing casteism for many years in the college and had spoken about it to the management. The principal often used to remind me that I was ‘a beneficiary of reservations’,” professor Sunil Waghmare told The Wire.

Waghmare, who belongs to the Maang community, which falls in the SC category, is head of the commerce department at the Khopoli Municipal Council (KMC) College of Arts, Science and Commerce. The college is managed by the Khalapur Taluka Shikshan Prasarak Mandal (KTSPM).

On March 15, Waghmare forwarded a message that said in Marathi: “Just because we are believing …should we continue to believe ….was your father born twice?????” He sent the message to a WhatsApp group for professors of that was created four years ago and had 34 members, including the college principal. The message apparently referred to the celebration of Shivaji’s birth anniversary twice every year. The message did not evoke any response on that day.

According to a fact-finding report by the Joint Action Committee for Social Justice – which was formed after Rohith Vemula’s suicide and consists of activists and organisations such as the Republican Panthers, the Committee for Protection of Democratic Rights etc – the next day the college principal Narendra Pawar asked Waghmare to apologise for the message. Waghmare explained that he had not meant to hurt anyone’s emotions and was ready to apologise. The principal informed him that the message had also gone outside the group.

On March 17, Waghmare received a message asking him to come to the management room in the college where 20 people had gathered. They called themselves ‘Shivpremi’, devotees of Shivaji. Members of the college management were also reportedly present. The ‘Shivpremis’ reportedly asked Waghmare why he had forwarded the message.

Someone then assaulted Waghmare and the others joined in. A few men from outside the room came in and joined in the assault. He lost consciousness because of the attack and had to be admitted to a hospital. He had injuries on his back, his left leg, both his ears and his head.

Meanwhile, the police were called and they asked another professor to file an FIR. According to the fact-finding report, this was done by professor Nagargoje, the administrator of the WhatsApp group. Within an hour, the police arrested Waghmare on charges of “deliberate and malicious acts intended to outrage religious feelings or any class by insulting its religion or religious beliefs.” The video shows a badly-injured Waghmare being lifted into a police van while slogans about Shivaji are raised in the background. Waghmare spent the night in police lock-up at Khopoli station. The next day, he got bail.

Within an hour of the the arrest, the managing committee of the college suspended Waghmare for six months for misconduct, moral turpitude and misuse of social media, and also set up a disciplinary inquiry.

Waghmare claims he was harassed for many years and this message on the group was being used to remove him from the job. “I have been served numerous show cause notices over the years,” Waghmare said. Assistant police inspector Ashok Thakur, who is the investigating officer in the case, declined to speak to The Wire, saying he had orders from his superiors not to speak to the media. Several attempts were made by this reporter to contact the principal, who each time said he was busy in a meeting.

Janani Shridharan, a social activist and a member of the fact-finding committee, said, “When we asked principal about the CCTV footage he told us on that day CCTV footage was not recorded due to power failure. However, his cabin has nine CCTV cameras. He also told us that he had to suspend the professor under pressure from the mob. Due process and protocols were not followed in suspending professor Waghmare.”

The activists have demanded that the cases against Waghmare be dropped and he be reinstated as well as compensated. They also want an independent inquiry into the entire incident and action against those from the college who remained mute witnesses to the violence.

Meanwhile, Waghmare has lodged an FIR against principal Pawar under the SC/ST (Prevention of Atrocities) Act.