Eight accused, all Patels from Bhadraniya village, have been arrested after the attack, police said. 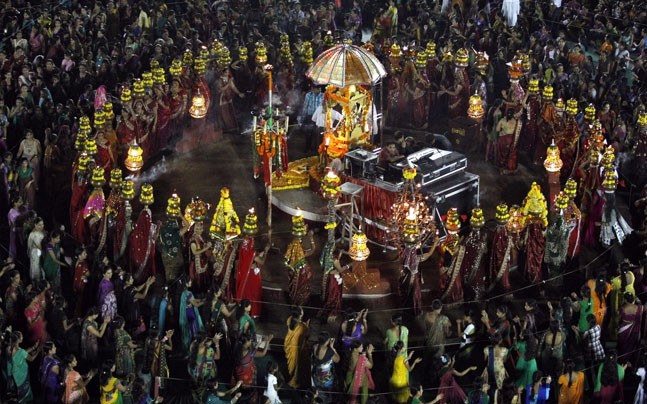 The accused allegedly said that Dalits do not have the right to watch garba performance. Representative image credit: Reuters

New Delhi: A 21-year-old Dalit was reportedly lynched to death in Gujarat’s Anand district on Sunday by people from the upper-caste Patel community for attending a garba. Eight accused have been arrested, the police have said.

The incident took place around 4 am.

Jayesh Solanki, his cousin Prakash Solanki and two other Dalit men were sitting near a house adjacent to a temple in Bhadrania village when a person made “derogatory remarks about their caste,” the police said, quoting a complaint filed in connection with the incident. The accused said Dalits “do not have any right to watch garba. He made casteist remarks and asked some men to come to the spot,” an officer at the Bhadran police station said. The upper caste men allegedly thrashed the Dalits and banged Jayesh’s head against a wall, the officer said.

Jayesh was rushed to a hospital in Karamsad, where doctors declared him brought dead in the morning.

“We have registered an FIR under IPC sections related to murder and the Prevention of Atrocities Act against eight men,” the official said. Deputy SP (SC/ST cell) A.M. Patel said it did not appear to be a premeditated attack. “”Jayesh was killed in the heat of the moment, as there was no rivalry between him and the accused. We are probing the case from all angles,” Patel added.

According to the Indian Express, the man who started abusing the group of Dalit youth was Sanjay Patel. He was joined by Chintan Patel, Jignesh Patel, Rutvik Patel, Vickey Patel, Dhaval Patel, Ripen Patel and Dipesh Patel, all residents of Bhadraniya village in beating up the Dalits.

The Anand incident comes days after two Dalit men of a village near Gandhinagar were allegedly thrashed, in separate incidents on September 25 and 29, by members of the Rajput community, for sporting a moustache.