'When a Close-Knit Society Is Polarised, It Turns Into Something Monstrous'

The murderous rivalry between the Sangh parivar and the CPI(M) in Kerala’s Kannur is the subject of Eeda, a new Malayalam film being praised as a sociologically acute take on the conflict. 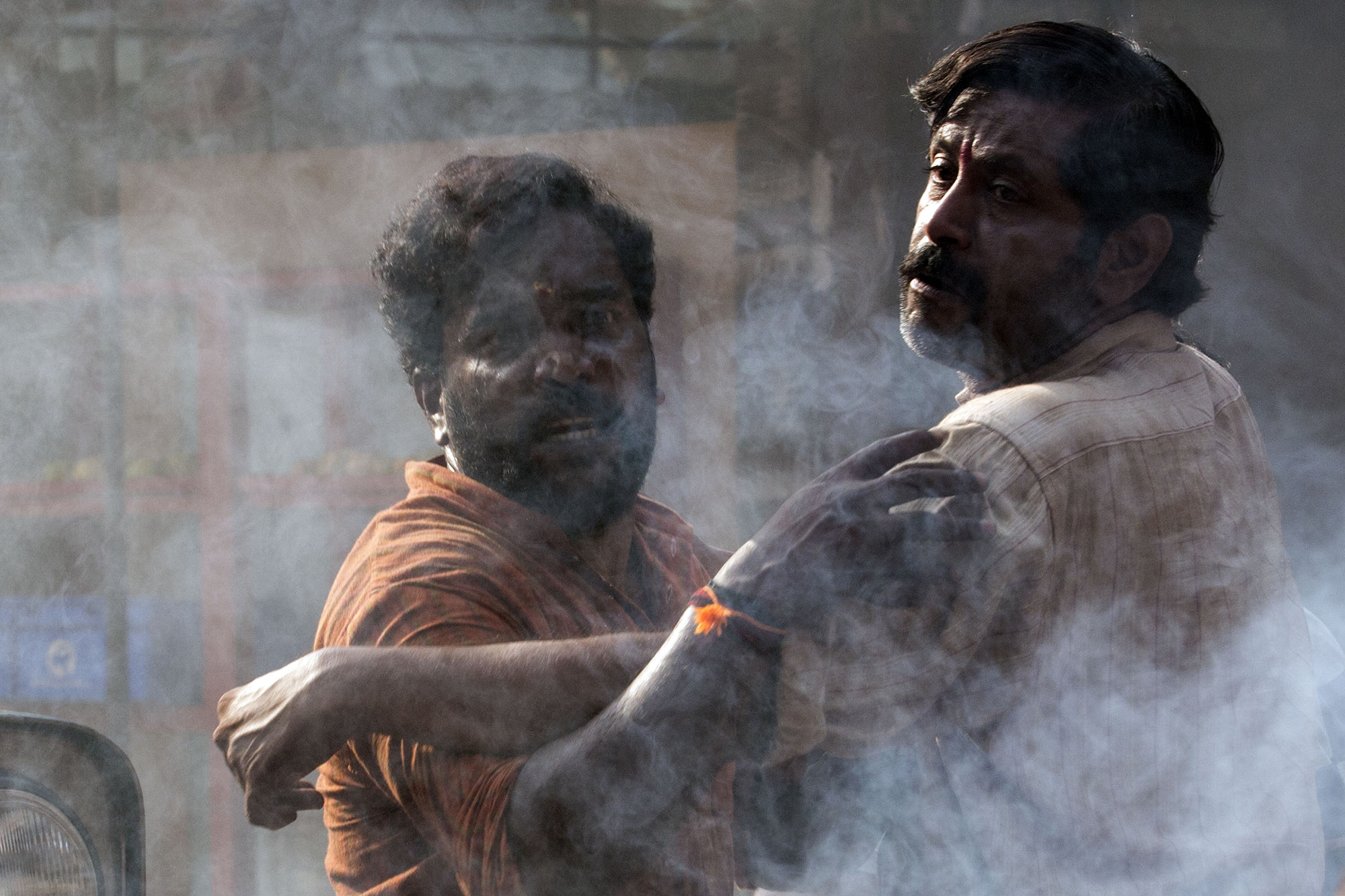 A still from Eeda.

For most people, the name Kannur has become synonymous with political violence. Recently, a high-decibel campaign by the Bharatiya Janata Party portrayed the place as a ‘killing field’ of its workers, ignoring its own role in the conflict. Eeda (which means ‘here’ in the local dialect), is a new Malayalam film which impressively captures the complexity and emotional fall-out of this decades-long conflict.

The debut directorial venture of national award-winning film editor B. Ajithkumar, Eeda sets the classic Romeo and Juliet formula – the protagonists hail from rival political clans – against the background of Kannur’s vendetta politics. The tension, which sets in early in the movie, is relieved only when the action moves to the nearby city of Mysore. The young lovers enjoy a brief, carefree interlude in this urban haven before they get sucked into the devastating political blood feud between their clans.

The lead actors, Shane Nigam and Nimisha Sajayan, both relative newcomers, shine even amidst an ensemble cast featuring some of the best character actors in the industry today. Their memorable performances, along with the measured directorial craft on display, makes Eeda more than worthy of the critical and commercial acclaim it has received.

Excerpts from an interview with Ajithkumar:

Eeda‘s authenticity is striking, especially its detailing of local culture. Do you have any personal connection with Kannur?

I’m not from Kannur myself, nor have I spent a lot of time there, although I have observed events there closely over the years. Very little of the movie was shot in Kannur, for obvious reasons, although we have tried our best to match the original terrain and setting. So, for authenticity, I have also my friends and colleagues from Kannur to thank. Many elements in the film have been drawn from their experiences, and the authenticity of the dialect and the local references too have been achieved through a collaborative effort. That said, given the violently partisan nature of Kannur politics, a true blue local may not have been able to tell this story impartially. 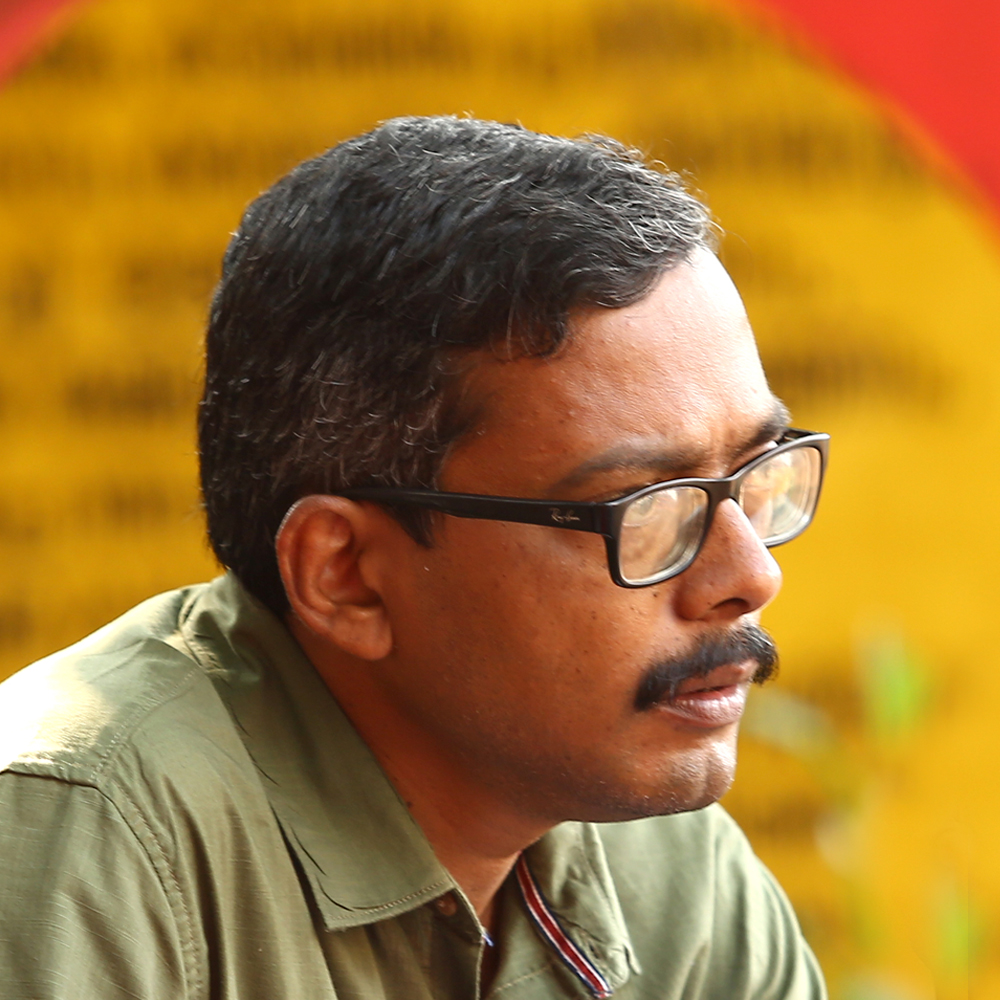 It’s unusual for a filmmaker to choose a serious political subject for his debut venture – how did this come about?

The violence in Kannur, in which more than 500 people have lost their lives over the last 30-40 years, is an unusual phenomenon in Kerala politics. Only the killings make it to the news; and often when one or the other party seeks to take advantage of it politically. No one speaks up against this violence any longer. I find such ‘normalisation’ worrying because the violence has only increased and shows no sign of declining. I wanted to highlight it in this film because it is a serious and ongoing violation of human rights.

Eeda is a love story first – and one that features relatively fresh faces. By blending politics with a romantic theme, were you trying to hedge your bets at the box office?

I’ve always wanted to do a love story, and as a student of literature, Shakespeare’s classic Romeo and Juliet was a natural choice given its universal theme. I felt that such a story where two people in love find themselves in circumstances that are opposed to their union, can be transposed very well to the setting of Kannur politics. I have also been lucky in being able to find the right actors. While the male lead, Shane, has proven his mettle with just a handful of films, this is only the second film of Nimisha, the 19-year-old female lead who has delivered a seasoned performance. Her’s is a born talent, whose arrival ought to be seen as an event in the Malayalam film industry.

There has been a flood of popular films based on the theme of Left politics in Malayalam recently. Where would you place Eeda in this overall trend?

The Malayalam film industry has always been ready to sell whatever they think the people want – it used to be upper caste Hindu symbolism earlier, in films made by directors like Priyadarshan and Shaji Kailas, today it is leftist symbolism. These symbols are used as tools to package and sell the commodity of the film. All those red flags and sloganeering give some people a rush; which these films hope to cash in on – I don’t mind saying this outright. In Eeda, we have tried to steer clear of such commodification of politics.

Eeda maintains a studied political neutrality. Was that a conscious decision?

If the film comes across as neutral, then it probably reflects my reading that the violence in Kannur has little to do with the Left’s values. This is power politics plain and simple, which has little to do with ideology. So it’s only if you see it through the narrow lens of party politics that the film can be deemed neutral. Neutrality would be to maintain a distance from either side – whereas the film attempts to transcend this divide and present the perspective of humanity; which is victimised by both groups. Perhaps that’s a truer progressive position.

If this conflict has little to do with ideology, that’s not how the key players like to portray it. You have also said that the case of Kannur is similar to most conflict situations. Can you elaborate?

Ideology is used as a tool to gather supporters initially, but it is insufficient in the long run. Which is why, ironically, we see the phenomenon of party workers switching sides between the CPI(M) and the BJP. The situation is so extreme that anyone leaving the party must necessarily take refuge on the other side. Obviously, they can’t be switching ideologies overnight.

Like in any conflict that endures, the most aggressive and opportunistic members of the group take charge, and those who stand for peace are pushed out. Once this happens – as it has in Kannur – both sides acquire a vested interest in the perpetuation of the conflict. After all, it is the source of their power, and it allows them to command resources. The result is the present gridlock, which naturally leads to fatigue. So, to make sure that people don’t pull out of the conflict, there is a constant supply of fresh incentives and provocations. This is what makes it so difficult to put an end to any such conflict.

A still from Eeda.

In the film, the conflict unfolds primarily as a rivalry between two prominent clans belonging to the same community. Can you tell us something more about this ‘pre-modern’, almost feudal aspect of the conflict?

Kannur is perhaps unique, as personal and family ties – and caste and clan loyalties – are much stronger there as compared to other parts of rural Kerala. Whether that’s a good thing or not, it’s important to note that it is these loyalties that have governed Kannur politics historically. The virtues of that society have been distorted, manipulated and exploited, its strengths have been turned against itself by vested interests for narrow political ends. When such a close-knit society gets polarised, it turns into something monstrous.

The film is certainly timely. Political violence in Kannur is now a nationally discussed issue, thanks to the BJP’s recent campaign. What’s your take on this recent development which couldn’t have been foreseen?

This was indeed unexpected, also because our focus was on the humanitarian element of the violence, rather than party politics. The BJP claims that the CPI(M) has been killing their workers in Kerala, but is silent about the CPI(M) workers they have killed. It is true that the CPI(M) has a massive support base in Kannur. Whereas the BJP has nothing comparable to show, which means that violence is a greater need for that party and that the party depends on it for visibility and stature. Given this, the sudden concern displayed by the BJP about the killings can only be seen as a cheap propaganda exercise. The fact is that both the parties have always been very particular about maintaining the ‘score’ when it comes to killings.

Finally, a word about Collective Phase One, the filmmakers’ group that you are part of.

It’s a ‘self-organising’ and informal collective of filmmakers who collaborate on specific projects. Broadly, we share the same political vision, which is best understood from the body of work we have produced over the last five years. We do not claim to be the avant garde; rather, we are very much part of the mainstream. The idea is to create a new sensibility from within mainstream cinema, which is also something several other filmmakers are attempting along with us.

Sajai Jose is a freelance journalist based in Kerala.