Caving to Pressure from Hindu Groups, UK Backs Down on Law Against Caste Discrimination

The UK government said cases based on caste discrimination were "extremely low", but findings of independent studies and even a government-commissioned report show otherwise.

London: In a major climbdown from its assurance of making it unlawful to discriminate based on caste, the UK government has now said that it will not be bringing any new law to ban caste-based discrimination in the country.

Citing “extremely low” number of cases of caste discrimination and calling caste “difficult to define”, the Theresa May government announced this on Monday.

Instead of banning discrimination outright, it has said that it wants to opt for the case-law method, wherein the legal remedy for such discrimination will emerge through successive judgements in cases of discrimination which reach UK’s courts, a process that many believe is tentative, unpredictable and time-consuming. This will happen only if victims of such discrimination approach courts, something which is very unlikely because of the time and costs involved, say rights activists.

Sat Pal Muman of CasteWatch UK said the government’s decision to adopt this approach marks a ‘dark day’ for the fight for equality and believes that the government buckled under pressure from Hindu groups. “It has sold out to those opposing the caste legislation, no doubt for political reasons with an eye on Hindu and Sikh votes, trade and commercial overseas reasons.”

This announcement comes as a massive victory for Hindu groups, including some right-wing groups, which had pulled out all stops to ensure that the government does not make caste discrimination unlawful. Many of these groups have often flaunted their proximity to the ruling Bharatiya Janata Party (BJP) and hence, the May government’s decision is now raising many eyebrows.

Part of the reason why this has surprised and disappointed many is the fact that in doing so, the UK government has gone against both its own word as well as findings. In 2010, a government-commissioned report had found ample evidence of caste-based discrimination in public life, especially in the education sector, at the work place as well as in public services like the health sector. The report had stated that the most effective way of tackling discrimination would be through creating a legislation which makes it unlawful to discriminate. Following this, the UK government even set out a timetable for legislation to ban such discrimination.

On Monday, the Theresa May government rejected these plans and dismissed concerns raised by human rights and activist groups fighting caste discrimination in the UK. 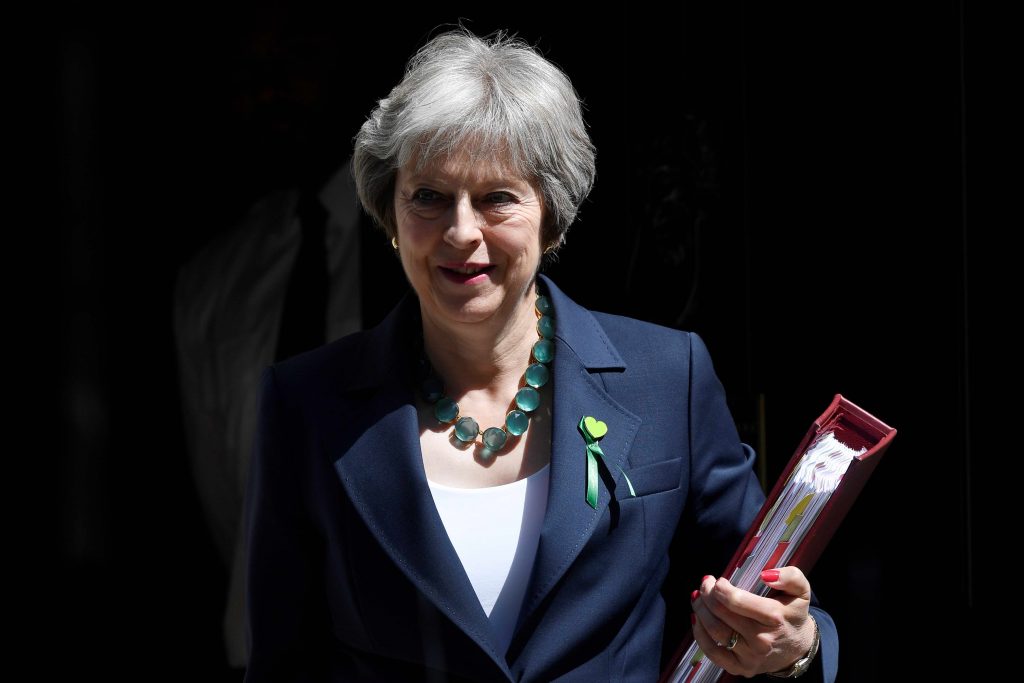 Theresa May’s government has backed down on law against caste discrimination in the UK. Credit: Reuters/Toby Melville/Files

The May government arrived at the decision after it conducted public consultations on the issue last year. It got over 16,000 responses of which 8,500 responses were against banning caste discrimination, 2500 were in favour of banning, over 3,500 rejected both options and over 1,100 responses were not sure of which was the better option.

Based on these results, one primary reason why the May government said it was against a new law was because of its low prevalence: it said only three cases of caste-based discrimination had so far been registered with the country’s courts.

Activists from UK-based groups who have been fighting against caste discrimination, however, say that this is far from the truth. They point to a 2010 report by the National Institute of Economic and Social Research (NIESR), commissioned by the UK government, which confirmed the prevalence of such discrimination in employment, education and the provision of social services such as elderly care.

In addition, members of these groups say that there is enough evidence through independent academic research and studies that these groups have conducted and submitted to the government which demonstrate the prevalence of discrimination. 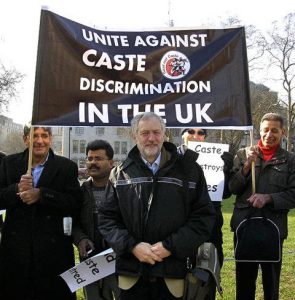 The Dalit Solidarity Network UK, a group with Labour leader Jeremy Corbyn as a trustee and which fights against issues of discrimination and oppression against Dalits in the UK, had conducted a similar study in 2006. The study looked at experiences of Dalit individuals and communities and found that 85% of them believed that Indians in the UK were following the caste system and the family members of half of them experienced caste discrimination.

Muman has maintained a case register of all instances that he has encountered, a decade and a half ago. “We register cases of discrimination regularly,” he says, pointing to the list he has compiled. The list is replete with examples of name-calling, based on caste names, of traditionally lower caste employees often being treated by higher caste colleagues and employers differently, once their caste is discovered, of school children in their early teens being discriminated in school by other children after their caste is revealed. The list serves as a chilly reminder of how caste can pervade different parts of the diaspora life as well.

The other reason that the UK government offered for not banning caste-based discrimination was that it could not arrive at a ‘universally accepted’ definition of caste. “Interpreting caste either too narrowly or too broadly could give rise to either the legislation failing to cover some of those it was intended to protect or risk importing concepts into law that it was not designed to cover,” the government said, in its report on the issue.

Caste and the UK’s Hindu right

Muman’s comment is echoed across those who have been demanding stricter rules to fight caste discrimination.

But it is difficult to miss the fact that the Conservative government’s climbdown comes after a vociferous campaign led by various Hindu diaspora groups who were fiercely critical of any move to ban caste-based discrimination, insisting that it did not exist. Many of these groups are close to Prime Minister Narendra Modi’s BJP and have never hesitated to advertise it.

One such group, the National Council For Hindu Temples UK (NCHTUK) had lashed out at the UK government for the proposed legislation and called casteism in India “a colonial conspiracy” and a hate crime against Hindus. Its report on the issue, titled ‘Caste, Conversion and a “Thoroughly Colonial Conspiracy”’, was released by senior BJP leader and Member of Parliament Subramanian Swamy. It welcomed the government’s decision, but added that the use of caste with reference to Hindu community was denigrating and divisive in order to facilitate ‘evangelical conversion’ activities.

Late last year, the same group had drawn the ire of many by inviting Tapan Ghosh, the founder of a right-wing Hindu organisation called ‘Hindu Samhati’ to the House of Commons for a talk titled ‘Tolerating the Intolerant’, where Ghosh spoke about ‘love jihad’, a Hindu-right conception that Muslim men, in an organised manner, conspire to marry Hindu women. It was also reported that Ghosh attended a Diwali event where he shared space with then British home secretary Amber Rudd.

Sources who have been involved in this debate over legislation say that such instances, among other things, were meant to serve as an indicator to Westminster of the clout and the influence that these Hindu groups have in both, New Delhi as well as Nagpur, home to the BJP’s ideological parent, the Rashtriya Swayamsevak Sangh (RSS).

Some other organisations actively involved in opposing the proposed law include the Vishwa Hindu Parishad (VHP)’s UK branch, an integral part of the Hindu nationalist Sangh Parivar.

Other Hindu organisations don’t agree that the government’s decision has anything to do with larger political themes around it. Trupti Patel, president of the Hindu Forum of Britain, another group which opposed the proposed law bitterly, said that the decision was made solely based on the representations that the Hindu community in Britain made. “This view is not expected of the pro-legislation lobby; they are reading political agendas only to justify their loss,” Patel added.

The Hindu Council UK, which opposed the caste legislation as well, but toed a more moderate line, said that the law would have been divisive in nature. “We have always maintained that bringing in such a law would have been very divisive since it would entrench caste further, rather than eradicate it,” says Anil Bhanot, a founding member of the council.

As much as the decision was about diaspora and global politics, it was possibly about the economics of it, too. One crucial reason why the May government, scarred by the unravelling of Brexit, does not want to upset the Indian diaspora is the economic might of the community.

A report in April this year by Grant Thornton, a global consultancy, revealed how the UK sees more investment by Indian-owned businesses than the whole of the European Union combined, employing 104,000 people and paying £360 million in corporation tax.

At a time when Britain is looking to seal trade deals with various countries to help it offset the impact that Brexit might have, it is unlikely to upset the applecart with the ruling dispensation of its fourth largest investor.

In addition, the Indian diaspora, forming over 2.5% of the total population, is the wealthiest ethnic minority in the country. A recent government race audit had revealed how over 35% of Indian households earn over £1,000 each week, as against only 24% of the native White British community. Many of them are influential donors to Britain’s political parties and hence, the government might have been wary of ticking them off.

The recent visit by PM Modi ended on a low for India-Britain relations after India refused to sign a Memorandum of Understanding to facilitate the return of undocumented Indian immigrants in the UK. Observers don’t rule out that this could have been a factor of consideration for the decision too.

The UK sees India as one of its leading economic partners in the world post-Brexit. Credit: Reuters

Lost in the din

Amidst this din, many fear that the decision will only mean a long battle ahead for victims of caste-based discrimination. The lack of a legal remedy for such discrimination puts off many to lodge complaints against instances of discrimination.

To add to it, groups and individuals fighting caste discrimination say that most victims don’t want to officially lodge complaints. One reason, they say, is the lack of understanding of caste – over 79% of those that ACDA had interviewed in 2009 for its study believed that the UK police would not understand them if they tried to register a complaint about caste-based discrimination.

In this context, the UK government’s decision makes their fight even longer. “This clearly means the victims will not have any legal protection and have to go through expensive long-drawn legal battles to get justice. This will be a massive deterrent for victims,” says Muman from CasteWatch UK.

Kunal Purohit is an independent journalist, based out of Mumbai. He reports on issues of development at the intersection of caste, politics, gender and migration among other things.