Deepa P. Mohanan, a scholar belonging to the Dalit community, has alleged that she was discriminated against on the basis of her caste for the last 10 years. She will continue her hunger strike till he is expelled, she said. 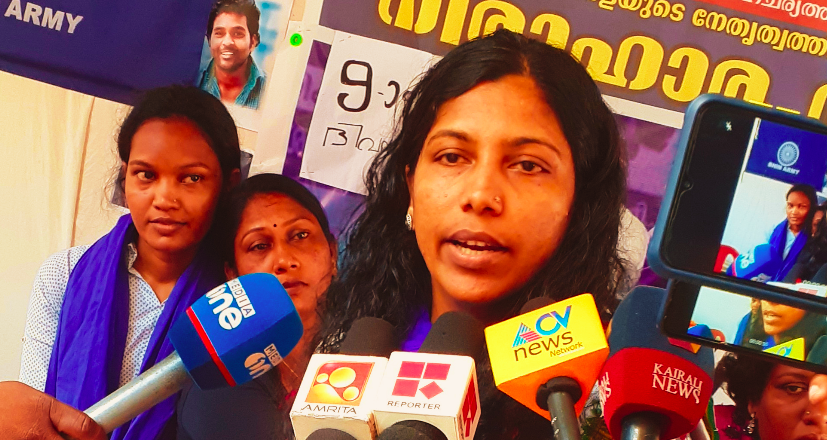 Kottayam: Kerala’s Mahatma Gandhi University has removed a senior professor from a research institute director’s post following a hunger strike by his PhD student who has alleged that she and her research have suffered a decade of caste discrimination in his hands.

Deepa P. Mohanan, a Dalit research scholar at the institute, has been on an indefinite hunger strike near the main entrance of the university since October 29. Mohanan has alleged years of discriminatory treatment and misuse of power by Kalarikkal.

Mohanan’s protest, which she has called a “fight against caste discrimination” at her institute, has attracted media attention and support from various corners. She has vowed to continue her hunger strike until Kalarikkal is expelled.

Dr. Sabu Thomas, Vice-Chancellor of the university, said in a press release on Saturday, November 6, that he himself will replace Dr. Nandakumar Kalarikkal as the director of the International and Inter University Centre for Nanoscience and Nanotechnology (IIUCNN), a research institute under the university.

‘Discriminated against for the last 10 years’

Mohanan, who is also a mother, has alleged that she could not progress with her research because of Kalarikkal’s hostile actions.

Mohanan joined the IIUCNN as an MPhil candidate in March 2011. After completing the course in April 2012, she joined the same department for a PhD two years later in 2014. Kalarikkal was joint director when Deepa joined the institute.

Mohanan said she began to face discrimination for being a member of the Dalit community soon after joining the university, i.e. in 2011.

Speaking to The Wire, Mohanan said, “I have not been able to do my studies smoothly for the last 10 years.”

Mohanan’s complaints against Kalarikkal include allegations that she was denied opportunities to do projects at other institutes, to use the institute’s facilities for her research works, that her MPhil thesis was rejected, that she was intimidated before others, and that there was refusal to process her MPhil degree certificate and transfer certificate within time.

Mohanan has also alleged that Kalarikkal even locked her once inside the Physics department, which houses the IIUCNN, in 2015. 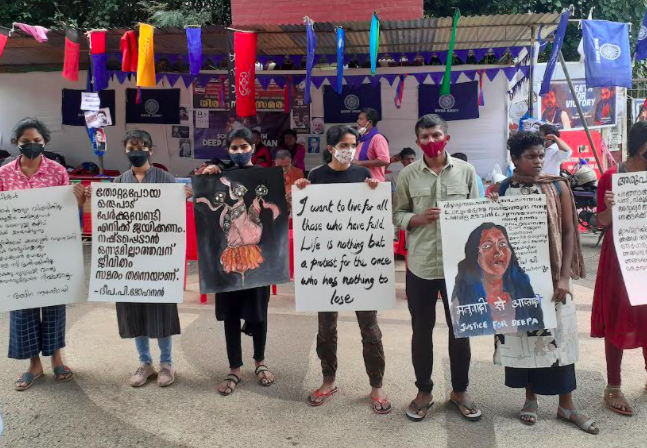 In 2015, Mohanan had filed a complaint with the university administration against Kalarikkal. A two-member enquiry commission of the university was constituted to look into her complaints. The commission had confirmed Mohanan’s allegations against the director, and said, “Since Deepa had to face intimidation in the name of caste, the university should take steps to ensure justice for the student”.

The commission also said it found the director having failed in “providing Deepa with infrastructure and material required for her studies”, and recommended the university to take action, “according to university rules”, on this. The commission’s recommendations, which The Wire has seen, did not contain conspicuous direction for disciplinary action against the director.

However, Kalarikkal was briefly removed as the director of the IIUCNN following the commission’s recommendations, according to an earlier statement issued by Mohanan. But, he returned to the post soon.

Since then, Mohanan has raised her struggle with the Kerala high court, police and the state SC/ST Commission. However, alleges that she continued to face harassment and discrimination at the university.

In the press release issued on Saturday, VC Thomas said Mohanan did not submit her research progress report, which PhD students must mandatorily submit every six months, since she joined the course.

But Mohanan has said that this was not possible, considering that Kalarikkal was denying her access to the institute’s laboratory as well as to material required for her research – something the enquiry committee had confirmed in its report submitted on October 2015.

A high-level meeting headed by the VC, on Saturday, constituted a new committee to look into the complaints raised by Mohanan, besides removing Kalarikkal from his current post.

A separate committee has also been formed to review Mohanan’s research progress, and provide her adequate research guidance.

The university’s decision to replace Kalarikkal came immediately after Dr. R. Bindu, Kerala higher education minister, in a Facebook post on Saturday, said that she will “ensure justice” for Mohanan. Bindu said the government would ask the university to remove Kalarikkal and also requested Mohanan to end the protest.

Kalarikkal’s office informed The Wire that he is “on an official trip to France” and was not available for comment. He had earlier called Mohanan’s allegations “baseless”.

As many as co-researchers of Mohanan’s, whom The Wire met at the IIUCNN on Saturday, refused to comment on the ongoing protest. “We need the institute’s permission to comment,” said one researcher. 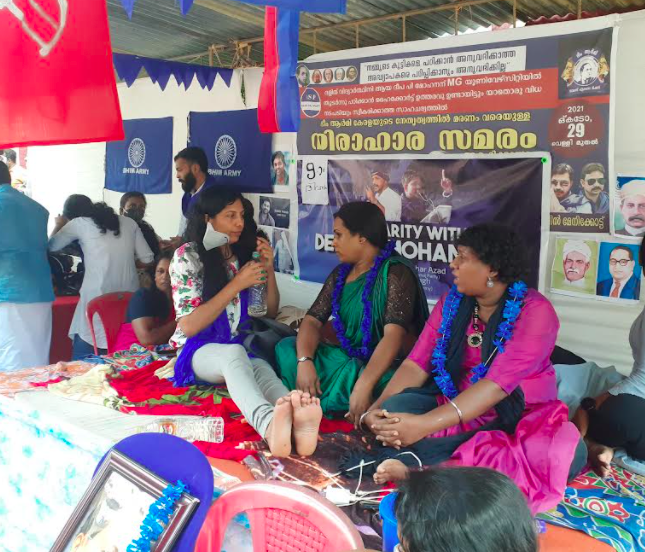 Mohanan and her supporters have pledged to continue their protest, calling for Kalarikkal to be removed from the institute.

“We demand his removal from the IIUCNN itself, and not just from the director’s post,” said Anuraji P.R., national vice-president of Bhim Army.

Anuraji, who is a PhD candidate at department of Hindi at Sree Sankaracharya University of Sanskrit in Kerala, said she came to know about Mohanan’s struggle only two months ago. “This is 10 years of caste discrimination,” she said, alleging that Kalarikkal had used his purported “ties with CPI(M) and the teachers’ union to avoid major disciplinary action against him.”

The protest has seen active support of the Bhim Army.

Other organisations who have supported the protest are Republican Party of India, Indian Labour Party, Sadhu Jana Paripalana Samgham, and Kerala Pulayar Maha Sabha. Student organisations like KSU and AISF also have extended their support to the protest.

On Saturday, groups of students and some political parties visited the protest venue to express solidarity with Mohanan.

However, a notable absence is the Student Federation of India (SFI), the student wing of the ruling CPI(M). Aslam, the secretary of MG University unit of SFI, said, “Deepa needs to get what she justly deserves”.

However, SFI, one of the most influential student groups in the state, hasn’t yet taken a stand on her ongoing protest. “We need clarification on something. Will discuss the issue and take a clear stand on the matter,” Aslam told The Wire on Saturday. 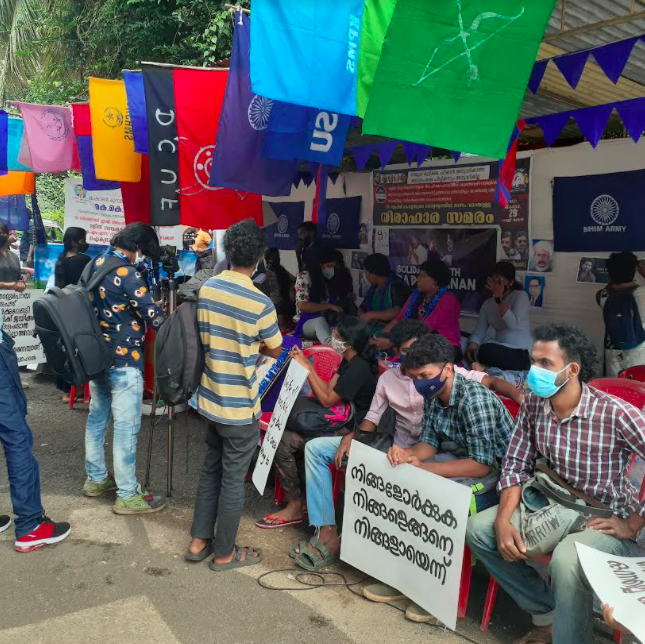 Dr. K.S. Madhavan, who teaches history at Calicut University, said he is concerned about what Mohanan had to go through. Madhavan said caste discrimination and gender inequality are two structural problems of Indian society and that there should be specific remedial measures to address these issues by now.

He said the “academic community must be given awareness and orientation” to understand how caste and gender discrimination works in the society, and to address them.

He also called for effective implementation of various measures and initiatives, introduced by the UGC and other concerned bodies, to address the caste problem. “We have various committees and cells. Those mechanisms need to function effectively,” he said.