The 24-year-old Patidar quota stir leader asked people in Surat to not vote for the BJP, but for 'a party that will be in a position to form a government'. 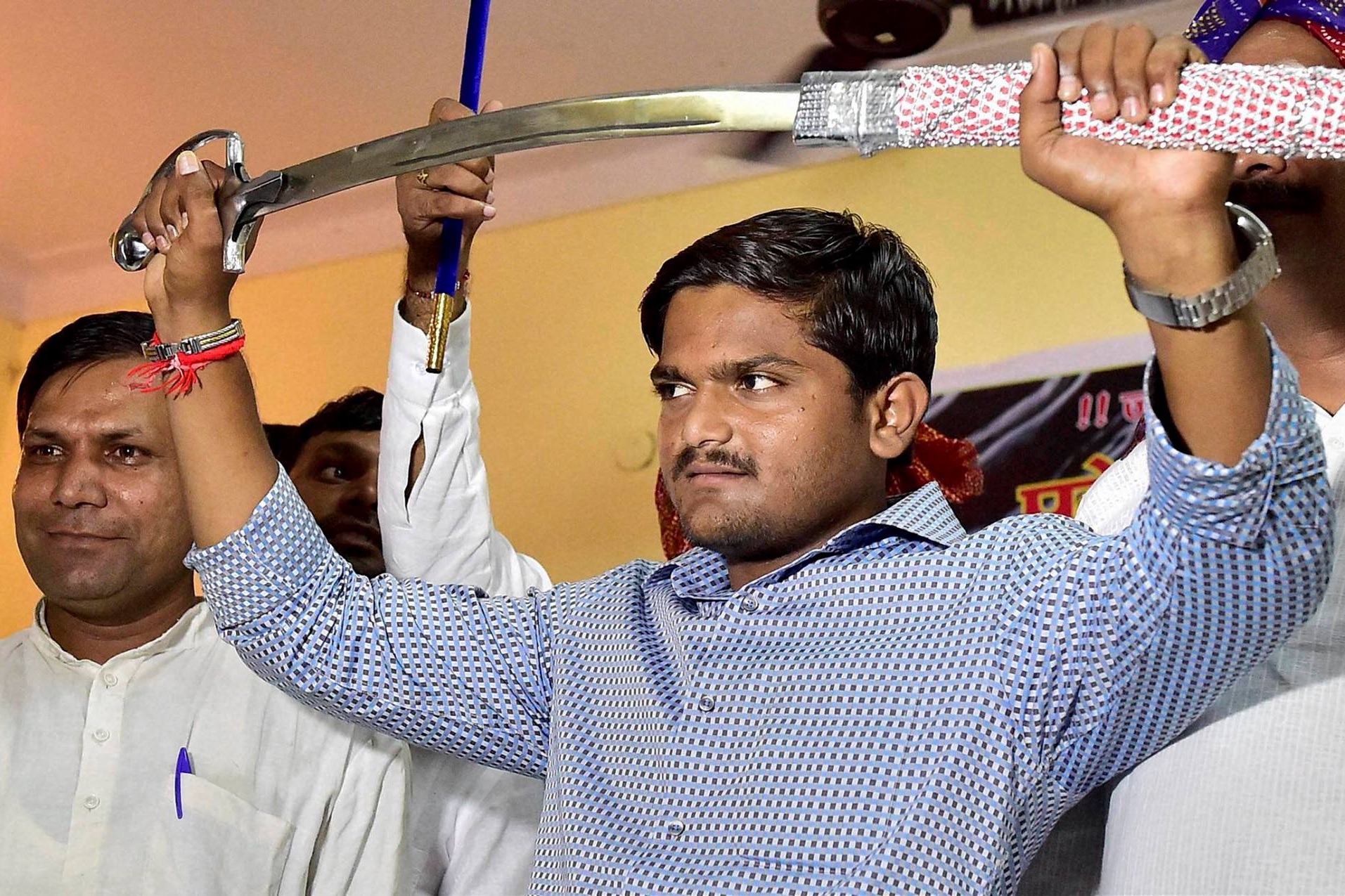 As the big-wigs of the Bharatiya Janata Party are busy mocking Rahul Gandhi in their poll campaign in Gujarat, it is Hardik Patel who is fast emerging as the thorn on the side of the saffron party.

The 24-year-old Patidar quota stir leader – not yet old enough to contest polls – is acerbic in his comments and spares none. Declaring the forthcoming elections as between the “six crore people of Gujarat” and the BJP, he mocks Modi by asserting that ‘river front development’ (which the government has attempted in Ahmedabad and is planning in Surat) is not an indicator of vikas and that real vikas would be when there is no rural exodus.

Hardik was speaking to an audience of more than 50,000 at a rally on late Sunday evening in Surat. Alleging that the BJP has fragmented the society – “samaj todne ka kaam kiya hai” – Hardik asked the audience whether Gujarat belonged to the BJP. He then lamented, “ghulami karney ki adaat padh gayee hai (people have become used to being servants)“, and exhorted the audience to vote against the saffron party.

Hardik has received unprecedented support of the Patels in both north and south Gujarat. His main audience are the diamond and textile traders, who mostly belong to Patel community, and had migrated from the Saurashtra region in search for jobs.

In the course of his speech on Sunday, Hardik suddenly took a pause and announced that there will be a five-minute break during which people can use their cell phones to call their relatives back in Saurashtra to ask them to vote against the BJP. When there was a commotion in the crowd who was frantically trying to place their calls, Hardik took the occasion to acknowledge the difficulty the crowd was facing to talk to their relatives. “They talk of 4G, but even 2G does not work… so much so about Digital India,” he then said. He then proceeded to mock Modi for running off abroad to ask for foreign investment.

Also read: Will Gujarat’s Disenchanted Patels Withdraw Their Long-Standing Support for the BJP?

“You should vote in such a way that newspaper headlines the day after election results scream: ‘Six crore people have thrown out their ahankari (arrogant) rulers’,” Hardik added. Behind him are pictures of Sardar Patel, Bhagat Singh and a representation of ‘Bharat Mata’ with the national flag in her hand.

Hardik ended his speech by administering an oath to the audience and asked them to repeat after him that they would go early to vote on election day and not vote for the BJP. He did not ask them to vote for the Congress, but for a party that will be in a position to form a government. That rules out the Nationalist Congress Party (NCP) and the Aam Aadmi Party (AAP), who have put forward many candidates in Surat. 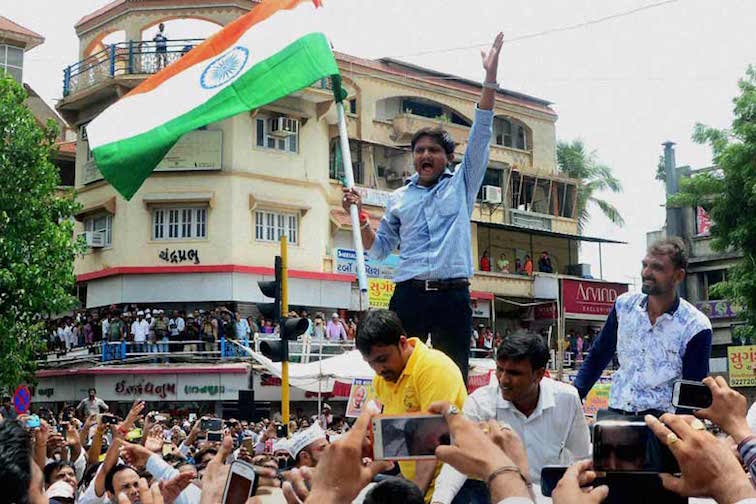 Though Hardik’s speech electrified the audience, his manner of speaking was mild and unaccompanied by gesticulations. Credit: PTI

Before his chance to speak, Hardik did not sit on the sofa on the stage, but squatted on the floor. At a point during his speech that was being broadcast live, Hardik gleefully announced the number off ‘likes’ his speech had garnered.

Though Hardik’s speech electrified the audience, his manner of speaking was mild and unaccompanied by gesticulations. Hardik asked the audience to maintain silence and they did. “But he powerfully delivers his message and takes on Modi and Amit Shah in the manner nobody has in the past. He often time describes Amit Shah – in what is a gross exaggeration – as General Dyer (of Jallianwala infamy),” points out a newspaper editor.

“He is young, he is energetic and he has no track record. He raises subjects that strike a chord with the rural masses and urbanites with links in villages. That’s why he is popular,” says 30-year-old Suresh Patel, a corporate executive.

Hardik spoke of the high costs of private college education which the common man can hardly afford and which does not guarantee a job. He has pointed out in many interactions that his father owns six acres of land and earns only about Rs 25,000 per month, with no guarantee of the crop produce and the price it will fetch. He was at pains to point out that it is incorrect to say that the entire Patel community is rich and well to do. He said that only 5% of the Patel community might be rich and others, especially the ones living in villages, are subject to the vagaries of nature and indifference of the state.

Analysts point out that 98 out of 182 seats in the Gujarat assembly are purely rural. It is here that Hardik might be a strong factor. Forty-five seats are partly rural and partly urban. Here too, Hardik could have some influence on the voting pattern. It is only in the 39 urban seats which stand solidly behind the BJP that there will be little Hardik effect (barring a few exceptions like in some assembly seats in Surat which has a large population of diamond workers).

Hardik has sparked a debate on rural versus urban and between haves and have-nots. According to analysts, this could have a huge spin off. Hardik’s weakness is that he is positioned as a Patel leader. Cries of ‘Jai Sardar’ rent the air as he took the stage. In fact ‘Jai Sardar’ – reminiscent of Sardar Vallabhbhai Patel – is the slogan of the Patidar Anamat Andolan Samiti (PAAS) that Hardik heads.

Analysts predicted that down the line, Hardik could well launch a thinly-disguised Patel party. The Patels in Gujarat – who constitute 15% of the state’s population – have always sought political power. Till the mid 1980s, they were with the Congress but later shifted to the BJP. The other alternative is that Hardik could attempt a paradigm shift by trying to forge a pan Gujarat coalition of the not-so-privileged classes cutting across castes. Yet another possibility is that Hardik may peak early and dissipate.