Will Gujarat's Disenchanted Patels Withdraw Their Long-Standing Support for the BJP?

The Patels and the saffron party have been inseparable partners since the fall of Madhavsinh Solanki government, but the community now feels sidelined. 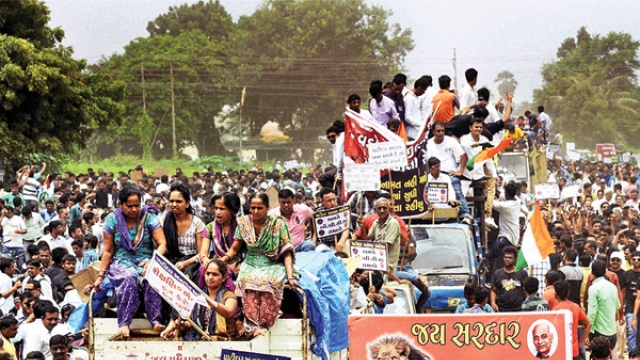 They joined the BJP in protesting against the reservation policy of the Congress government in the mid 1980s. But 30 years later, they are threatening to quit the party if reservations are not accorded to them. This is the story of the Patels in Gujarat – the community that powered the saffron party to office and continues to be its major support group. But will the Patels desert the BJP in the forthcoming Gujarat elections? That’s the million-dollar question, the answer to which nobody has. Possibly, much will depend on whether the Congress promises them reservations.

Hardik Patel, the new-age Patel leader, has given the Congress till November 3 to elucidate its position on the reservation for Patidars – a call that the grand old party will find difficult to take.

After the debacle in the 1984 Lok Sabha elections in which it won only two seats out of 543, the mantle of the BJP fell on the shoulders of L.K. Advani. This was the time that Gujarat was in a turmoil. Then state chief minister Madhavsinh Solanki of the Congress party along with Gujarat Congress chief Jinabhai Darji had conjured a new electoral alliance of KHAM – Kshatriya, Harijan, Adivasi and Muslim – to keep the Congress party in power.

Fall of the Congress

To keep the alliance partners happy, Solanki proposed reservations for the socially and economically backward in college admissions and jobs. While this was welcomed by the KHAM beneficiaries, there was a major reaction from the agitated Patels who fuelled anti-reservation riots that hit Gujarat’s cities, leading to a loss of life and property. The Patels, hitherto with the Congress, were newly economically empowered and were now looking for education for their children. As a forward community, they were left out of the ambit of reservations and the Patels saw that their chances of being admitted to engineering and medical colleges would recede.

The anti-reservation sentiment brought down the Solanki government as the Patels joined the BJP en masse. The BJP, which was at the time a party without adherents in the state, welcomed the Patels with open arms. Since then, the Patels and the BJP have been inseparable partners.

Patels under the BJP raj

Political analysts see BJP in Gujarat as a Patel party. The Patels are also seen as the major beneficiaries of the prolonged BJP regime in the state, through government contracts and other opportunities which have transformed the hitherto rural community into a major economic power. Even now, a third of all MLAs in Gujarat are Patels, although the community comprises only 15% of the population. But socially, the Patels are bound together and oftentimes they raise the slogan of ‘P for Patels’ to underscore their unity. 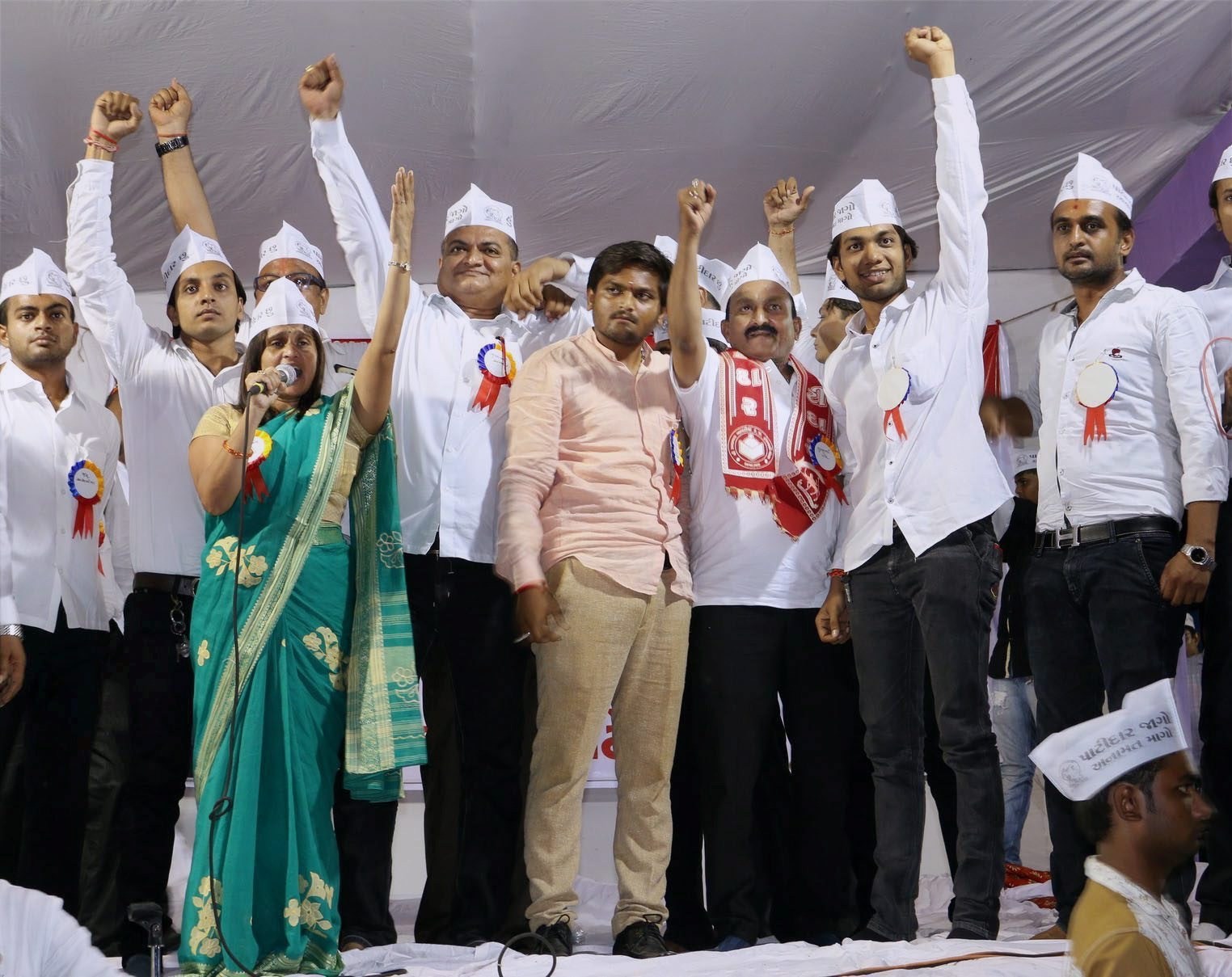 Under Keshubhai Patel, who was the chief minister till 2001, Patels had a golden period that continued under Narendra Modi (this was, however, a phenomenon not quite understood by Keshubhai who could not decipher how a Patel-supported government could be headed by a non-Patel like Modi, and thus periodically fuelled failed revolts against Modi).

Hardik, however, does not think that the Patels have benefitted from the BJP raj. A 24 year old from Viramgam, less than 60 km from Ahmedabad, Hardik was born in 1993 when the BJP was well entrenched in Gujarat and the Patels in the BJP. Hardik has seen no other party in power in Gujarat and thinks that development has bypassed a large section of the Patels in the state. A plain vanilla commerce graduate from an Ahmedabad college with low third division marks, Hardik represents the average job seeker. Since ‘only the wearer knows where the shoe pinches’, the observations of Hardik cannot be thrown out the window and his demands dismissed as being politically motivated.

Also read: Sachin Pilot: The Congress Will Defeat the BJP in Gujarat and Rajasthan

Since June 2015, Patels under the leadership of Hardik have been demanding OBC status for the community that will ensure reservations for them in jobs and admissions to educational institutions. Gujarat has 27% reservation for OBCs. Originally, there were 81 communities in the OBC group – expanded to include 146 communities by the end of 2014. The Patels have also formed a Patidar Anamat Andolan Samiti (PAAS) to fight for reservations and claim it to be a non-political body. 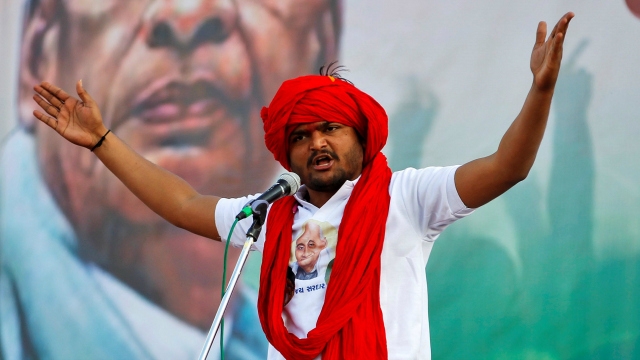 In August 2015, PAAS gathered over five lakh people in Ahmedabad in a meeting to demand reservations. Such meetings have continued across the state and Hardik has been jailed briefly. While he continues to be uncompromising in his approach to reservations, his demand has put the spotlight on the nature and spread of economic development in the state. The contention of Hardik is that there are not enough jobs for Patels in the countryside, especially as small and medium industries in cities have started to fail. This has led to reverse migration of Patels working in big cities back to the villages. With increased urbanisation and big projects more land has been acquired in villages taking away the Patel farmland, and yet no commensurate jobs have been created.

Although the younger non-affluent Patels are disenchanted with the BJP, the older more prosperous members of the community are still with the saffron party. “I agree Hardik Patel will break the Patel votes but that may be only 20%,” claims Kalpesh Patel, 50, a techie working in Mumbai who maintains close contact with his Patel-dominated village in Junagadh. But others are not that sure. “The Patels are a single caste with common social practices stretched across several classes. This time the class interests may come to fore and may lead to significant vote division,” predicts Jignesh Shah, an academician.

The Congress will find it difficult to meet Hardik’s demands and promise reservations for Patels. Such a move will lead to a strong reservation from other OBCs who are already in the Congress fold and whose quota benefits the Patels. This is the reason why BJP is also finding it tough to deal with Hardik whose men are disrupting party meetings at some places. What the BJP policy will be is not yet clear although Modi is going to use the better part of November to address Patel concerns through dozens of public meetings that he proposes to address across the state. For starters, a ‘Run for Unity’ has been organised for October 31, the birthday of Sardar Patel. It is likely that a large number of new Patel faces will be introduced in the elections to beat the anti-incumbency effect.