The Selective Outrage of Bihar's Politicians

Two brutal attacks just a week apart in Bhagalpur, and the very different political receptions they have got, say as much about Bihar’s caste politics as the assaults themselves.

"Five days after the brutal killing of three members of a Dalit family in Bihpur, the bloodstains are yet to be cleaned away, the food that was cooked on the night of the murder is still lying in the vessels..' 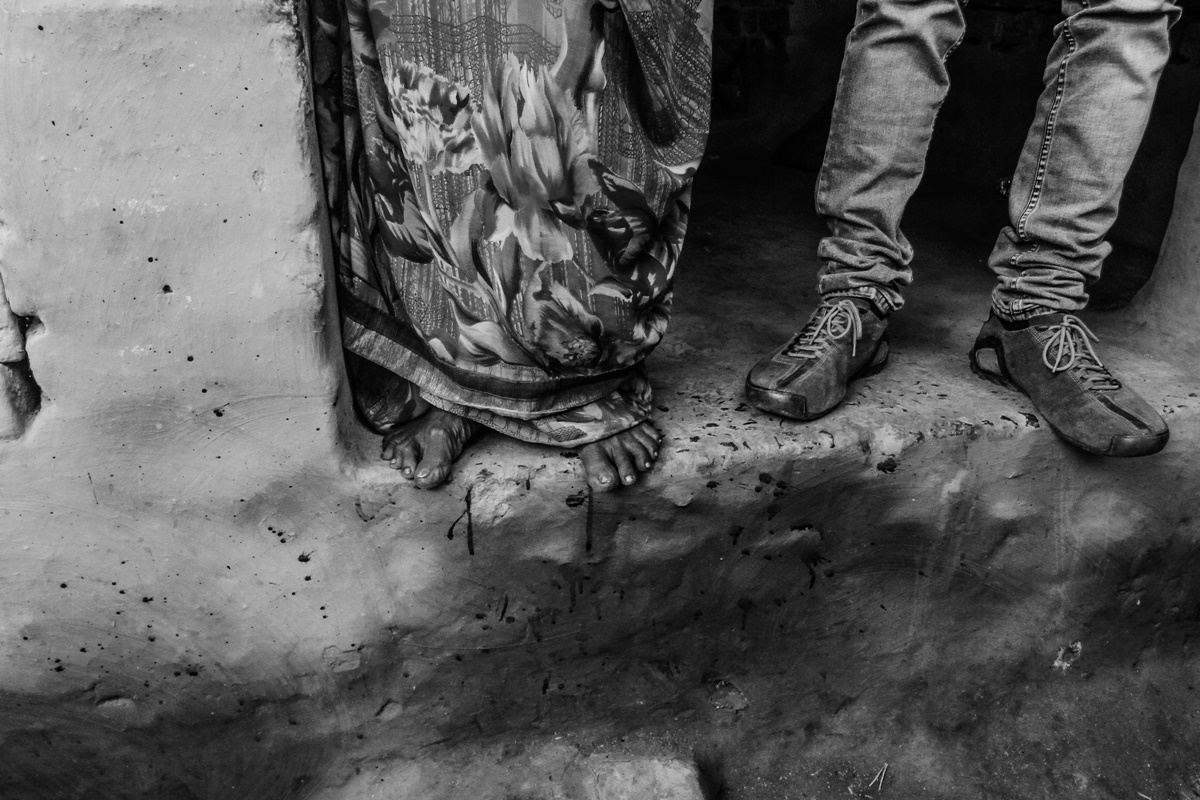 “Five days after the brutal killing of three members of a Dalit family in Bihpur, the bloodstains are yet to be cleaned away, the food that was cooked on the night of the murder is still lying in the vessels… Credit: Javed Iqbal

The brutal murder and alleged torture of three members of a Dalit family in Bihpur, Bhagalpur district of Bihar on November 25 has barely been reported in the mainstream media outside Bihar. However, an unbearably painful video of a moaning 17-year-old girl Bindi Kumar, as well as images of her visibly tortured and dying 11-year-old brother Chottu, and their parents Kanik and Devi Kumar, have gone viral and are doing the rounds of Bihar’s politiscape. The killers are yet to be identified and there is a tacit silence in the village, even though the murder took place right in the middle of the Dalit tola in village Jhandapur.

It would have been impossible for the neighbours to be unaware of the attack as the homes are all huddled together, yet apparently no one heard or saw anything. No one knows who took the video. You speak to anyone alone and they say they don’t live there. The first woman who saw the bodies in the morning claims to not have seen the wounds even though, in the image that is circulating, Kanik’s eyes seem to have been gouged out.

The wounded were taken on sheets to the nearest primary health centre. Bindi, the only survivor of the attack, is fighting for her life in Patna Medical College Hospital. The police are yet to record her statement. The post-mortem report of her mother, whose body was found with her clothes torn, denies any evidence of rape.

“Pair pakda, haath joda, sab padosan ko poocha, koi kuch nahi bola (I folded my hands and fell at their feet, but none of the neighbours has revealed anything),” says Santosh Kumar, the oldest son of Kanik and Devi Kumar. He was working as a manual labourer building roads in West Bengal when he heard the news of the attack on the family. “I haven’t eaten in two days, I haven’t slept. I asked everyone about what happened and no one is saying anything.” 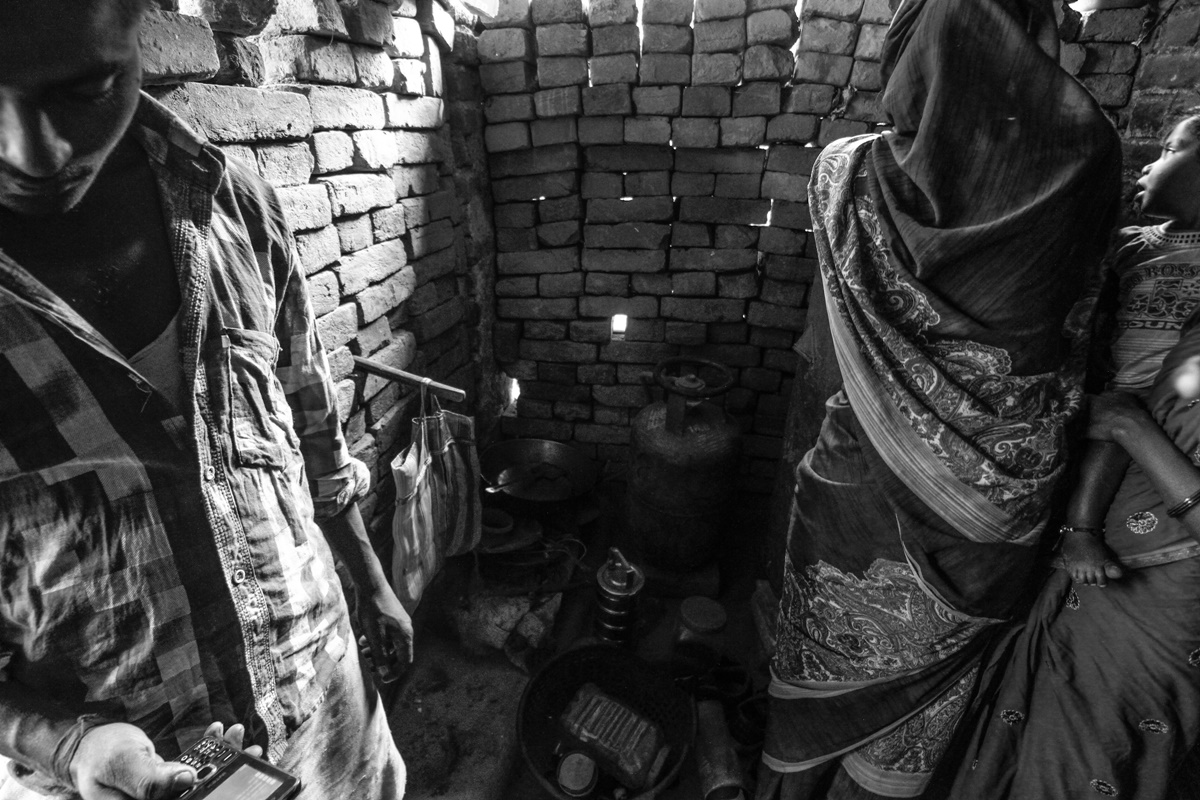 “Look at this, look at that, take a picture of everything,” Say the neighbours of Kanik Ram, showing bloodied pillows, un-eaten food, rummaged clothes, dry pools of blood. Credit: Javed Iqbal

No one could think of a reason for the murder, despite the village being dominated by Bhumihars. “They just abuse us once in a while,” says an old man.

Kanik Ram and Devi Kumar were landless labourers who supplemented their income by fishing. Their home, built with Rs 20,000 under the Indira Awas scheme, has no doors and no shut windows and the walls are barely cemented. Five days after the murder, there is still food left in the vessels from the night of the murder, the bloodstains are yet to be cleaned off the floor and the walls, flies infest the room and a bloody pillow still lies in one corner.

The army of fact-finding teams, local reporters, activists and opposition members who have arrived in the village since then have all faced a wall of silence and confusion.

Jhandapur’s Harijan tola (as it is locally known, unlike the word Dalit which might have been used in a more politically mobilised village) has never seen a ‘ghatna‘ or event like this before. Village elders have placed dozens of plastic chairs around for the dignitaries. Every mainstream party in Bihar has been represented here: from Uday Narayan Choudhary of the JDU, Abhayanand of the Congress, to the BJP’s Shahnawaz Hussain and Shailendra Kumar, the Ex-MLA of Bihpur. The RJD has been well represented with Tripathy Nath, Ramji Manjhi, Satendra Paswan and Gulam Rabani, as well as RJD’s Dalit Cell District president Sanjay Rajak, as has the Left with Bindeshwari Mandal of the CPI, Manohar Mandal, Anwar Alam, Nawal Kishore Sharma of CPM and Sudama Prasad of CPI (ML). Pappu Yadav from the Jan Adhikar Party Loktantrik also came visiting.

The police are saying the issue may be about a loan or conflict with Kanik’s business partners and are questioning people from the fishing caste. Politicians, turned rustic Sherlocks, examine the crime scene over and over in their heads. But whatever explanations they proffer, no one is conceding it has anything to do with caste. The question begs to be asked, if this was a mere killing over finances, then why murder the entire family, and brutalise their bodies, if not to send out a message to the rest of the village?

Indu Kumar says and repeats vehemently that her daughter’s rapists must be put away for life. Credit: Javed Iqbal

Two kilometres from Jhandapur Harijan Tola is the village of Milki. A 17-year-old girl from this village was kidnapped and gangraped in Bhagalpur town in a building in front of the post office from November 14-19. Two Rajputs, Manish Singh and Sunny Singh are ‘first accused’, along with ‘unidentified others’. Sunny is related to Sanjeev Singh, a JDU MLC. The girl was a student of the Madhusudhan Sarvoday Vishwavidyalaya. She took tuition lessons in Bhagalpur, where she lived with Manish’s cousin sister at the Sheela Complex. It was, therefore, normal for her to be away from home for days. After kidnapping her, Manish forced her to make daily phone calls to her mother at gunpoint, saying everything was fine.

Sunidhi (the name she chooses to go by for privacy) thought she wouldn’t survive: “I thought I was counting my last breath there. They should not be spared, not just because of what happened to me, but what they can do to other women. They used to grab me with both hands and pour alcohol down my throat. I would pass out. There were many people there, sometimes even his (Manish’s) wife was there. Manish was involved in a smuggling business, alcohol, poaching… He used to push me suddenly against the wall… I still get blackouts. He hit me against the wall at least 20 times; he never fed me, only gave me alcohol. “Ek ladki aayi hui hai, chahiye aapko? (A girl has come, do you want her), he used to tell others.”

But she somehow managed to escape after locking Manish into the room: “While I was escaping he said that if I say anything, he’ll attack my family.” Once out, she ran onto the street and called her sister. Sunidhi filed her complaint in Azamgarh police station, covered in bruises and swellings. A medical examination was done, but two days later, the local newspapers started to report that it found no evidence of rape. After activists across Bhagalpur protested, the Bhagalpur SP, Manoj Kumar, initiated another medical team that included Mayaganj’s medical superintendent, Dr Upendra Nath, as well as two other doctors, Dr Sandeep Lal and Dr Anupama Sinha. This panel confirmed evidence of rape. Eleven days after her escape, there are still visible signs of assault on Sunidhi’s face. 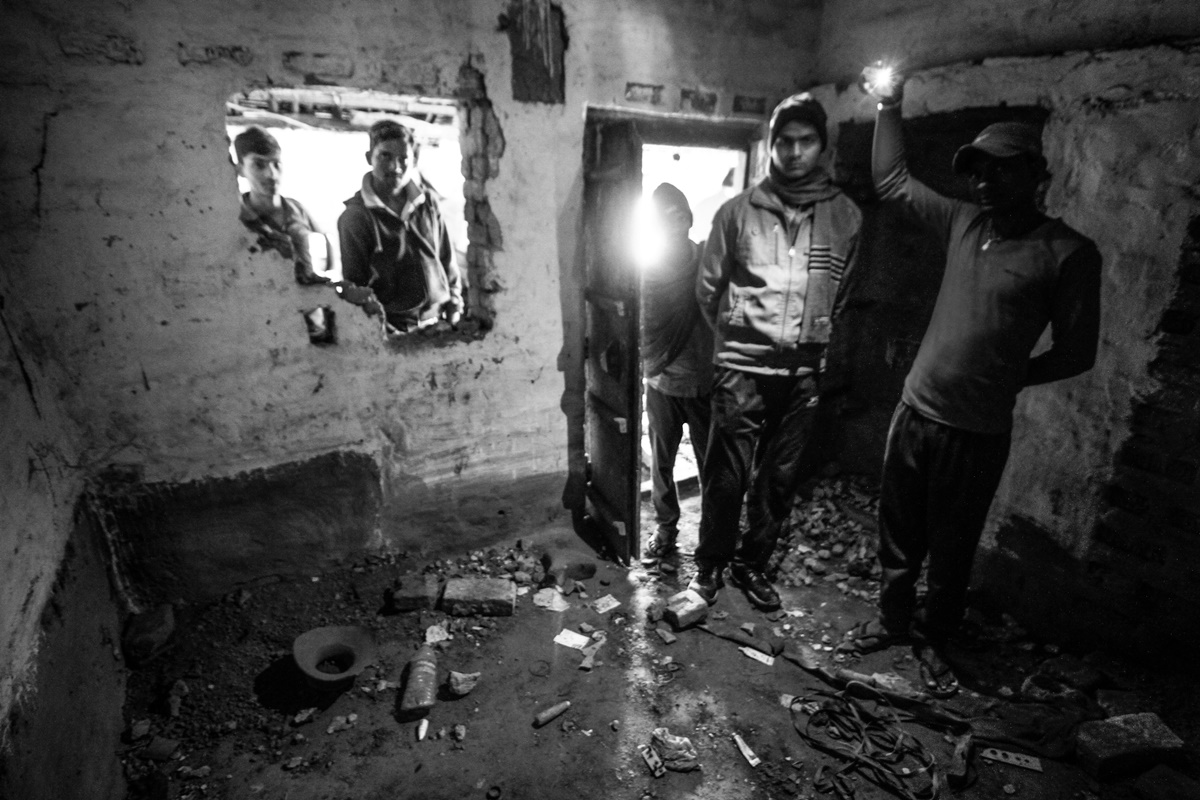 The village of Shiromani Tola was attacked by the neighbouring Bhumihars in 2015 after Anand, a Tanti boy and Phulo, a Bhumihar had eloped. As of 2017, the lovers are still in hiding. Credit: Javed Iqbal

Sunidhi is the youngest daughter of an ANM (auxiliary-nurse-midwife), and wants to study medicine. Apart from all her trauma, Sunidhi is now also worried about her board exams: “The police have all my notebooks for my board exams as evidence, I can’t lose time, I must study and finish my exams.”

The media has hardly helped. “The newspapers wrote such things about me…. I tore what they wrote about me in the newspapers,” Sunidhi told me.

Gautam Kumar Pritam, a neighbour and district president of the Socialist Party who has been helping the family since the first day, notes how the behaviour of the local media has always been antagonistic towards Sunidhi, and has tried to protect the accused who have political patronage. “Usko katghara par khada kar rahe the (They were putting her in the dock),” said another activist.

The activists described how “one channel ran a report about her behaviour and background and never even once spoke about what actually happened to her.” The Hindustan, one of India’s leading Hindi newspapers, ran a report saying she had run away from home earlier “out of love.” 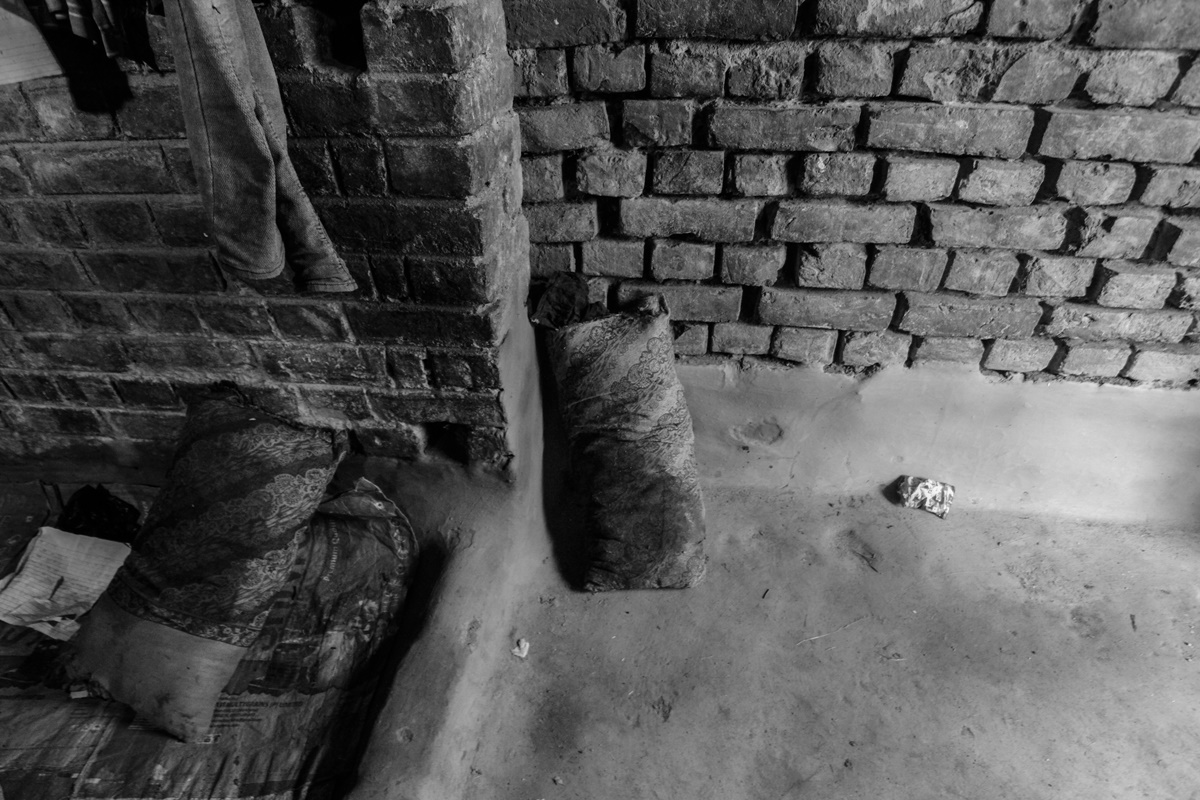 The normalisation of arson

Over the last two years, there have been burnings of Dalit homes across Khagaria district, which borders Bihpur. In 2015, Shiromani Tola, a Tanti Dalit village was burned down by Bhumihars over an inter-caste relationship and recently, in October 2017, Chamashiya, a Musahar village, was burned down by Yadavs over land.

In the first case, the JDU MLA, Ramanand Prasad Singh, is a Bhumihar from the same village as the attackers. He has blamed other parties for spreading caste politics but has never done anything to reign in his own people. Singh claims people were living in peace but “outsiders” spread “this malaise”. Ravindra Tanti, an Ex-MLC of JDU, told the villagers to go back home and forget what happened.

In the second incident in 2017, politicians have cancelled their visits to Chamashiya owing to the fact that there is no connecting road, and the village lies across a network of small rivers.

Maybe if the attackers weren’t inconvenient, there would’ve been a road by now.

Javed Iqbal is a journalist and a photographer from Mumbai.