After Azamgarh and Meerut, this is the third such incident in Uttar Pradesh in March alone. 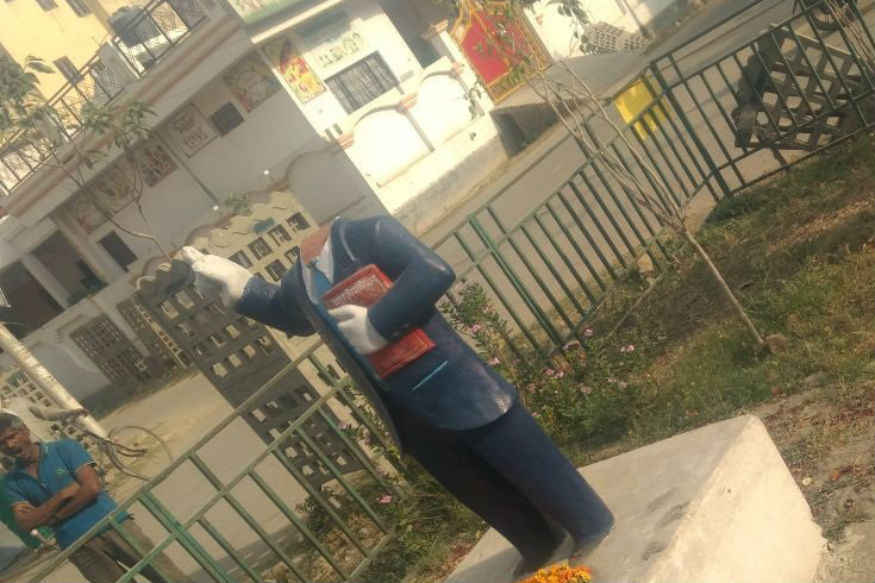 The statue was found decapitated in Ambedkar Park in Trivenipuram area of Jhunsi in Allahabad. Credit: Twitter/ANI

Close on the heels of the Adityanath government in Uttar Pradesh adding ‘Ramji’ to B. R Ambedkar’s name, a statue of the Dalit icon was found beheaded and vandalised in Allahabad on Saturday morning.

This is the third such incident this month, according to a report in the Indian Express.

Confirming the incident, the police said the statue was found decapitated in Ambedkar Park in Trivenipuram area of Jhunsi in Allahabad by “unidentified miscreants”.

“Locals found the head lying a few feet from the statue early on Saturday morning,” police said, according to the Indian Express. According to reports, some locals informed police by which time leaders of  Bahujan Samaj Party and Samajwadi Party and their supporters gathered in the park and began a protest, demanding immediate arrest of the culprits.

“We have registered an FIR under sections 295A (deliberate and malicious acts intending to outrage religious feelings of any class) and 427 (mischief causing damage) and we are investigating the case. The FIR has been registered against unknown persons. We suspect the incident occurred last night”, additional SP (trans-Ganga) Sunil Kumar Singh told Indian Express.

As tension built up in the area, Nagendar Patel, SP leader and the newly-elected MP from Phulpur also landed up at the site. He said he had asked the district administration to install a big statue here and they had promised to do so. “This is the fourth time this statue has been vandalised over the years, so we asked them to establish a police chowki here as well. Unlawful elements keep doing this to the mahapurush of the Dalits, it is a shame,” he added.

As angry SP-BSP supporters (both the parties have recently stitched an alliance to take on the BJP) gathered and started demanding immediate action, BSP’s Allahabad zone president R K Gautam said his party supporters and general public who “look up to” Ambedkar were very “disturbed” by the desecration of the statue,  as per the IE report.

Of late, there has been a spurt in incidents of statue vandalism in UP which such incidents reported from Azamgarh, Mathura and Meerut in recent days.

Dalit groups last week lashed out at the UP government for trying to “appropriate” Ambedkar’s name while reminding the saffron party that Ambedkar had in fact shunned Hinduism because of the divisive caste system.

The trend of  vandalising statues began in February with  the razing of Lenin’s statue in Tripura after the BJP won assembly polls there after defeating the Left Front government.

This was followed by incidents of razing statues of social reformer Periyar in Tamil Nadu, with the latest incident reported on March 20 in Pudukottai district where the much-revered Dravidian movement icon’s statue was found beheaded.