In Bhilavdi village of Sangli, residents say the sarpanch refused to send rescue teams to lower caste areas, despite them being worst hit by the flood.

Bhilavdi, Sangli: By the evening of August 3, a good 24-hours before the rains had turned tumultuous in Sangli district of western Maharashtra, the residents of Panchasheel Nagar sensed the approaching danger. Their houses, right at the bank of the magnificent Krishna river – a 1,400 kilometre long water body that is one of the major sources of irrigation for Maharashtra, Karnataka, Telangana and Andhra Pradesh – were already about three feet under the water. By the night of August 4, the water was seven feet high. Over the next two days, the water level was at a deadly 12 feet, submerging most single-storey houses in the locality.

An all-Dalit Buddhist settlement, Panchasheel Nagar, situated outside the Bhilavdi village – a common set-up seen in any village in Maharashtra and elsewhere – was one of the first to be affected by the flood due to its proximity to the river bank. Other affected areas include Dalit and OBC settlements like Sathe Nagar, Maulana Nagar and Sakharwadi. The savarna settlements, on the other hand, belonging to the Jains, Marathas and a small population of Brahmins, are away from the river, at a greater height, and the flood’s impact was negligible.

Of Bhilavdi village’s nearly 13,000 people population, around 30% belong to Scheduled Castes, nomadic tribes and other backward castes. Situated on the border of Kolhapur and Sangli districts, Bhilavdi is one of the worst flood-affected villages. The two districts had remained under water for abut a week and the state administration claims over 7 lakh people had to be shifted to a safer location.

In Bhilavdi, even though the Dalit settlements bore the worst brunt, residents claim they were the last to get access to the rescue team. As many as 12 men aged between 18-40 years, were stuck in the water for over five days. They were rescued only after a fight broke out between the residents of Panchasheel Nagar and the village sarpanch Vijaykumar Chopade. The residents of the Dalit bastis have accused the sarpanch and other village administration officials of discrimination and say they diverted the rescue team to the mostly unaffected upper-caste and Brahmin areas.

On August 3, as the Krishna’s water level began to rise and overflow into the village, some families began to roll up their belongings and shift to nearby structures located at a greater height. Suman Kurane, a 70-year-old partially paralysed woman who was seriously ill and bed-ridden could not be moved immediately to a safer space. Her son Sanjay and daughter-in-law Renuka made a few failed attempts and decided to stay with Suman in the house until some help arrives.

“Water had begun rising at a dramatic speed. There was no way we could have moved aai (mother) in that water. We shifted to the terrace of the neighbouring bungalow that night. By the next morning, the water had reached the terrace’s level,” says Renuka, narrating the event. 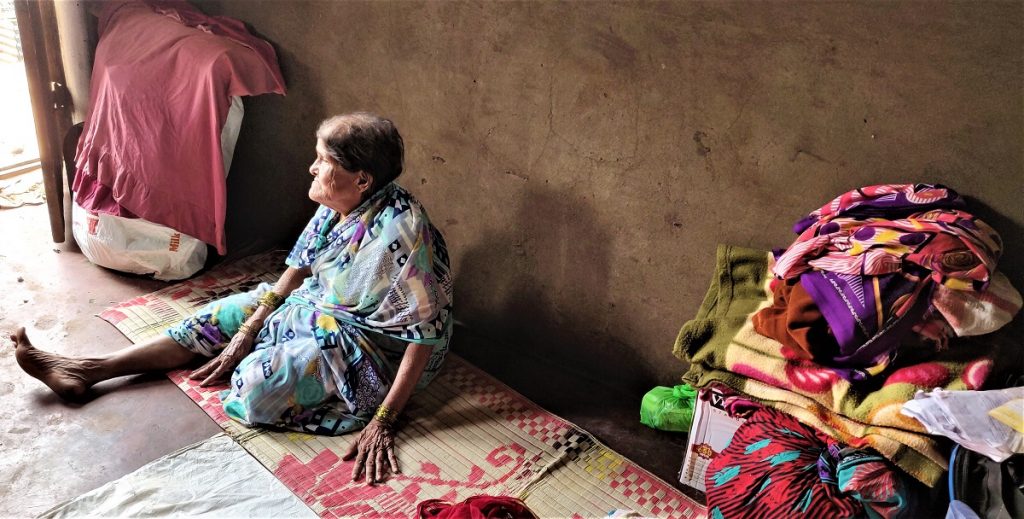 Suman Kurane, a 70-year-old partially paralysed woman was stuck in her flooded house for over 24 hours. Photo: Sukanya Shantha/The Wire

The next morning, a team of 12-15 boys from Panchasheel Nagar risked their lives, swimming in the water and doing a door-to-door check to see if anyone was stranded. “In the morning, we raised an alarm and sought help. The boys somehow managed to get the gram panchayat to act and send a boat,” says Suman. This boat too, Suman says, was sent only 24-hours after her family was stranded.

While Suman and her family were rescued, the 12 men were left behind to fend for themselves. “We kept pleading to at least take a few men on the ferry boat, but the sarpanch did not budge. He said he will send the boat back, but didn’t,” says Rahul Kamble, a 19-year-old, who was marooned in deep waters for five days.

The Bhilavdi gram panchayat had two boats, of which one was defective. The other could accommodate around 20 persons, including a diver. This boat, according to the villagers was first sent to Magdoom gully, a predominantly affluent Jain settlement with a few Maratha and Muslim houses. “Even after the deluge hit us with full force, houses in Magdoom gully – which were mostly unaffected – were evacuated first. Water had entered just a few houses in Magdoom gully’s entrance, that too barely a foot or two. Still, the sarpanch, Vijaykumar Chopade, who is also a Jain, catered to his own community’s needs first,” said Praful Kamble, a resident of Panchasheel Nagar. He has also been at the forefront of handling the flood relief work over the past two weeks. Chopade, strongly denies all such allegations, calling them “baseless and political” in nature.

Villagers say this delay could have cost the 12 youths’ lives if not for the National Disaster Relief Force (NDRF), which took over the relief work on August 9. “I had to fight with the sarpanch to get the boat to our area. The sarpanch and his nephew did not budge until the NDRF stepped in and pressure was built by the residents here,” says Mallawa Kamble, Rahul’s mother.

Chopade, a BJP leader, retorted, “The water current was very sharp and we did not have a trained diver with us. We could not have entered the area and come out safe. So, we took this tough call.” He further added that Magdoom gully was also impacted and the rescue work was the need of the hour.

However, when this reporter visited the area and spoke to the residents, found Chopade’s claim untrue. “The water had reached the gully’s entry point. We were tense that our area too would soon be flooded, but fortunately that did not happen,” said M.A. Pathan, one of the residents of the gully.

Another resident, Rakesh Chopade praised the sarpanch for reaching out to his community and prioritising them over others. “Chopade saheb did not want to risk anyone’s life and ensured women and children from our area were safe,” he added. When asked if his house or the area was impacted, he said, “This is the top most part of the village and has never got affected.”

Satyajeet Bhandare, a 23- year old MA student told The Wire that the men, after staying afloat in the water for several hours, had to break open a two- storey building and taken shelter there. “The water current was high. We were in the water for several hours and didn’t see a way out, we finally decided to break into a house,” Bhandare says. There, Bhandare says, they stayed on the first flood for a day and had to move to the terrace the next day, as the water level rose.

“There was no food or water for us. We broke in the house and managed on whatever was available in the house, waiting for rescue to be sent to us,” Rahul recalls.

Rahul says by the end of third day, he and a few others had given up hope. “My phone was working for the first two days. On the phone we were told help has been sent to us. But when we did not see it coming, we grew sick with worry,” he says. His 22-year-old friend Suraj Ranjane, who was also stuck in the water, says they had to drink the flood water to survive.

“There was water everywhere but nothing to drink. After the second day, we decided we will just drink the accumulated water,” Suraj says. Some boys have severe injuries on their limbs inflicted while attempting to get out of the water.

Rahul Kamble (left) and Suraj Ranjane were among the 12 boys who were stranded in the flood for nearly five days. They say the village Sarpanch did not offer any help to their Dalit basti. Photo: Sukanya Shantha/The Wire

On August 9, the rain’s intensity had gradually decreased. On the following day, water had begun to recede. As families slowly returned to the village, they were in for a rude shock. Several houses in Sakharwadi, a Dhangar community settlement, had flattened. In Sathe Nagar, where the Mang community lived, over a dozen houses had fallen apart and several more were rendered unusable. In Panchasheel Nagar and Maulana Nagar too, there was massive destruction. Besides the broken houses, people had to drag out slush and bodies of dead cattle from their houses.

In Sathe Nagar, Bhagwan Vitthal More was seen making frenzied calls, inquiring about the 20 buffaloes that his family owned. “When we moved out, we had loosened the rope and let the buffaloes go. I could not have saved them, so hoped they would swim their way to safety. I have not seen them since,” More said.

In Sakharwadi, almost all 40 houses have lost their buffaloes and goats. “We saw several animal carcasses floating on the water, some stuck in our houses, and some buried under the debris. Ever since we returned, we have only been locating and burying their decomposed bodies,” said a villager.

The water sources in the village have got contaminated. The families here are rationing bottled water that has been provided to them as a part of relief material. The villagers fear an epidemic will break out if the area is not sanitised at the earliest. Several children have already complained of fever and stomach ailments.

Relief too, they claim, is reaching them only after protests and fights. “Even before the relief enters the village, it is being looted by influential people in the village. Only those relief materials specifically sent to our colonies have reached us,” Praful Kamble claims.

Praful added that what unfolded in Bhilvadi is symptomatic of how caste operates in villages. “Even if you won’t see violent attacks on Dalits, such differential treatments are a common thing here,” he said. “Nature’s fury doesn’t discriminate. But humans do,” he concluded.