As Azadi Kooch Comes to a Close, Dalits in Gujarat Claim Land They Were Allotted 50 Years Ago

This movement may have ended, but leaders said they will continue to take up the struggle of landless Dalits everywhere. 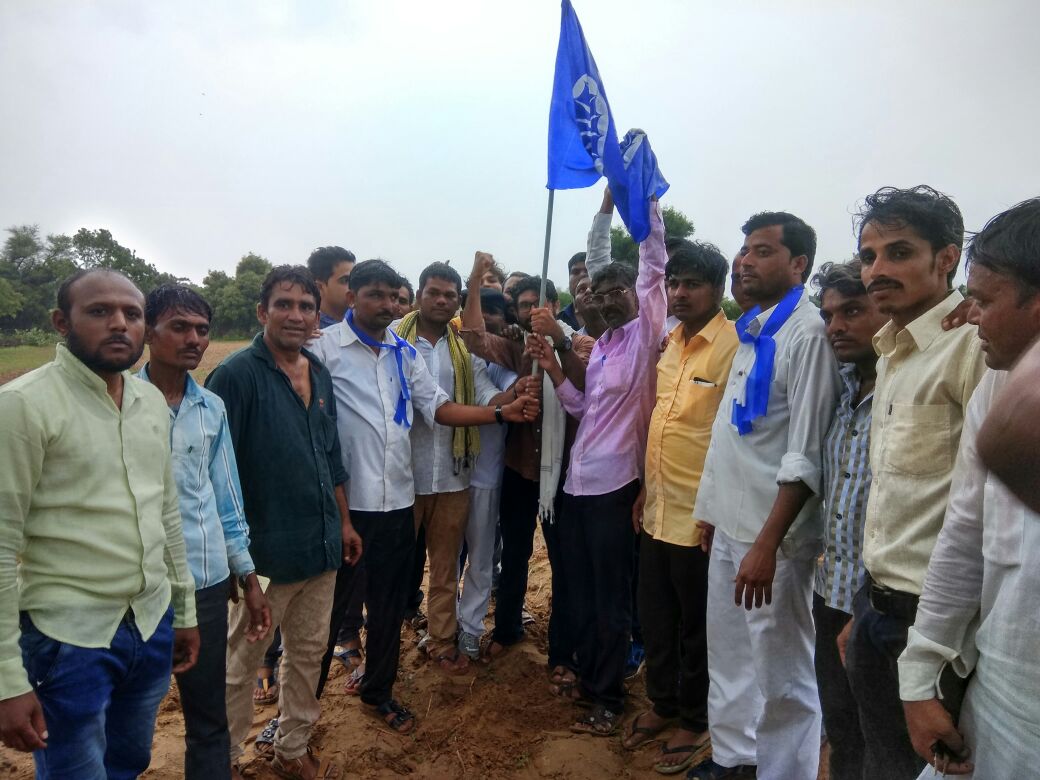 A blue flag is planted on the land allotted to Dalits in Lavara village. Credit: Damayantee Dhar

Dhanera, Gujarat: Azadi Kooch, the seven-day rally to mark one year since the public flogging of Dalits in Una, culminated at Dhanera, Banaskantha district, on July 18.

Amidst a crowd of about 2,500 people and 200 police personnel, several cultural groups like the National Peace Group performed, followed by speeches by Dalit leader Jignesh Mevani and Dalpatbhai Bhatia of the Banaskantha Dalit Organisation (BDS), which marched along with Azadi Kooch as the rally entered the district.

Bhatia was responsible for getting the required permission for the Azadi Kooch to go through villages in Banaskantha. This is relevant because on its first day, the rally was stopped at Mehsana after police permission was revoked, and leaders and participants were briefly detained. The Azadi Kooch rallied through Banaskantha with police personnel and people from the state and central intelligence agencies accompanying them everywhere, without further disruption.

The rally, organised under the banner of the Rashtriya Dalit Adhikar Manch (RDAM), began on July 11 from Mehsana. One of its aim was to claim 12 acres of land that apparently belongs to four Dalit families in Lavara, a village in the Dhanera taluka, Banaskantha district. However, on July 17, when the rally had stopped at Soneth village, the core teams of the RDAM and the BDS were informed that the Banaskantha district collector, Dileep Rana, had taken up the matter and that the concerned piece of land shall be handed over to the families peacefully. 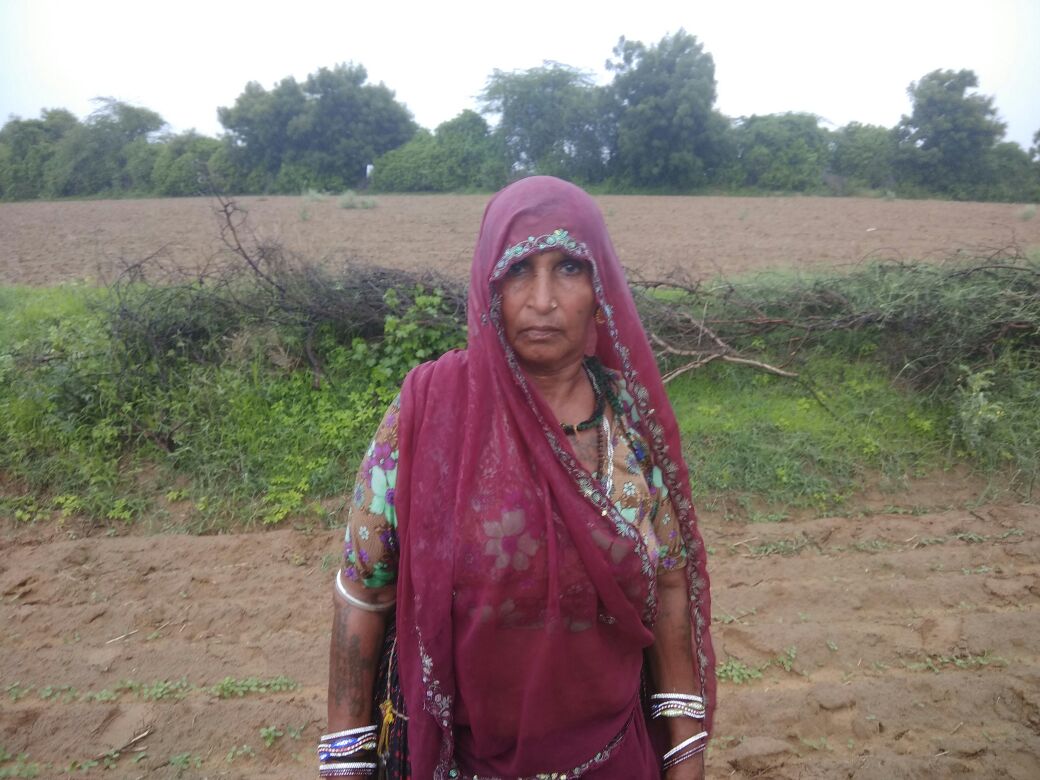 Trijaben , one of four Dalits who got back their land after 35 years on July 18. Credit: Damayantee Dhar

However, the Dalit villagers from Lavara reached Dhanera on July 18 to inform the rally that people from the Darbar community who had illegally taken possession of the land were threatening the Dalits after the collector made his announcement. “The Darbars have threatened one of the four land owners who was to get possession today. Harchanbhai Kasabhai Solanki, who has been threatened, is also the sarpanch of the village. Naturally the rest of them are also scared right now,” said Bijabhai, a resident of Lavara who had come to Dhanera to talk to Mevani about the situation.

Also read: Interview – Jignesh Mevani on the Azadi Kooch, Solidarity and the Future of Dalit Politics

On learning of these developments, Mevani announced that the Azadi Kooch shall march to the Dhanera police station and sit on a dharna until an FIR is filed against the people of Darbar community who threatened the Dalits in Lavara. Following this, the Dhanera police swung into action and agreed to file an FIR on the spot.

“We don’t know about the matter. The villagers from Lavara reached out to Mevani instead of the police. We are looking into the matter as we speak and will file FIR if the incidents turn out to be true,” J.M. Gadvi, police inspector of Dhanera police station, told The Wire.

Govindbhai Parmar, an advocate and Dalit rights activist who was participating in the Azadi Kooch, said that an FIR (36/2017) was registered against seven residents of Lavara belonging to the Darbar community under Sections 506(2) and 114 of the IPC and the SC/ST (Prevention of Atrocities) Act.

Mevani, however, stated, “We will march till Lavara nonetheless and make sure the four Dalit families, who have been waiting for their land for 50 years, receive what is rightfully theirs. This is a symbolic act that marks the beginning of a long struggle for land for the landless, which has been at the core of this movement. More than one lakh acres of land had been allotted to landless families under land the Land Ceiling Act 1961, but only on paper. Most of the beneficiaries are Dalits. About 6,000 acres of this land falls in the Banaskantha district.” 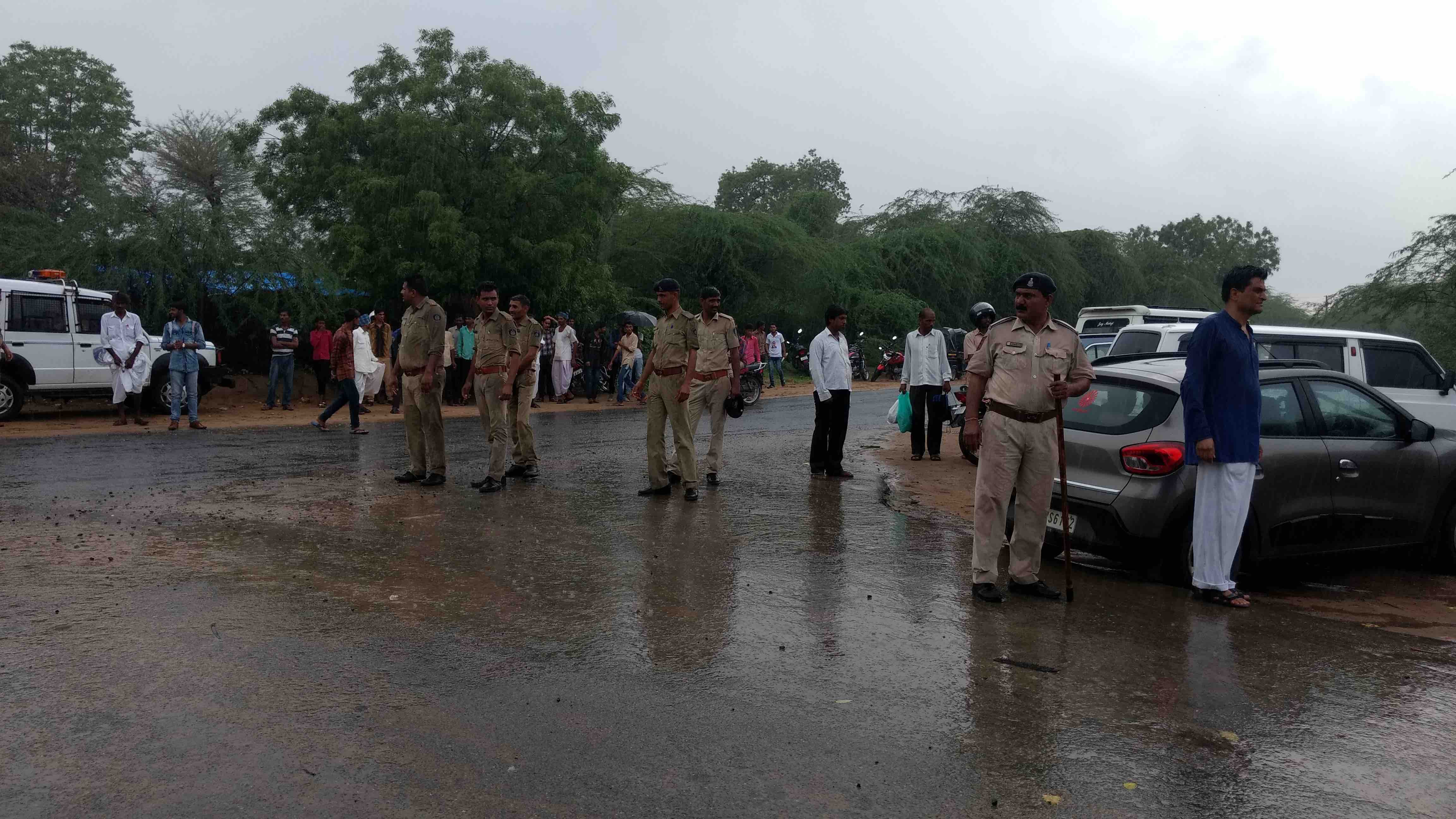 The Dhanera police, however, did not allow the entire rally to go to Lavara. Mevani, three other RDAM core team members Kaushikbhai Parmar, Rakesh Maheria and Dixit Parmar, Bhatia from the BDS and members of the CPI(ML), CPI(ML)-Liberation, who had been a part of the rally since day one, visited the spot accompanied by the police.

This group of about 20 people planted the symbolic blue Ambedkaraite flag on the contested land to ensure that it was handed over to its rightful owners –Harchanbhai, Punjabhai Solanki, Trijaben Solanki and Kantibhai Harchanbhai Solanki. Each family now has three acres of land.

Police deployed at the entrance of Lavara village stopped everybody else who wanted to go to the village. Even Subodh Parmar and Kiran Solanki, core members of the RDAM, were not allowed to enter Lavara.

The Azadi Kooch ended on a successful note, but Mevani said that the struggle does not end here.

“A state-wise movement shall begin on December 6 to claim back land for the landless under the banner of RDAM. Some of the families have waited for 50 years to be able to own the land allotted to them. The land will also be an alternate mode of employment. When Dalits took an oath to not pick up carcasses last year during the Dalit Asmita Yatra, the practical question of alternate employment stared them in the face. Hence many of them could not give up the menial jobs that they have been doing for generations. The land will ensure that they have respectable means to earn a livelihood,” Mevani told The Wire.

Activists from the BDS will make sure the land remains with the Dalit families in Banaskantha, Bhatia adds. “A movement like Azadi Kooch is happening for the first time in Banaskantha and will boost the morale of the Dalits here. However, in the end they have to stand up for themselves and their land, and fight for their rights. Just being present at such events as supporters is not enough. As of now a fight has been won, but a long battle awaits landless Dalits.”