No organisation has come forward so far to claim responsibility for the bandh. 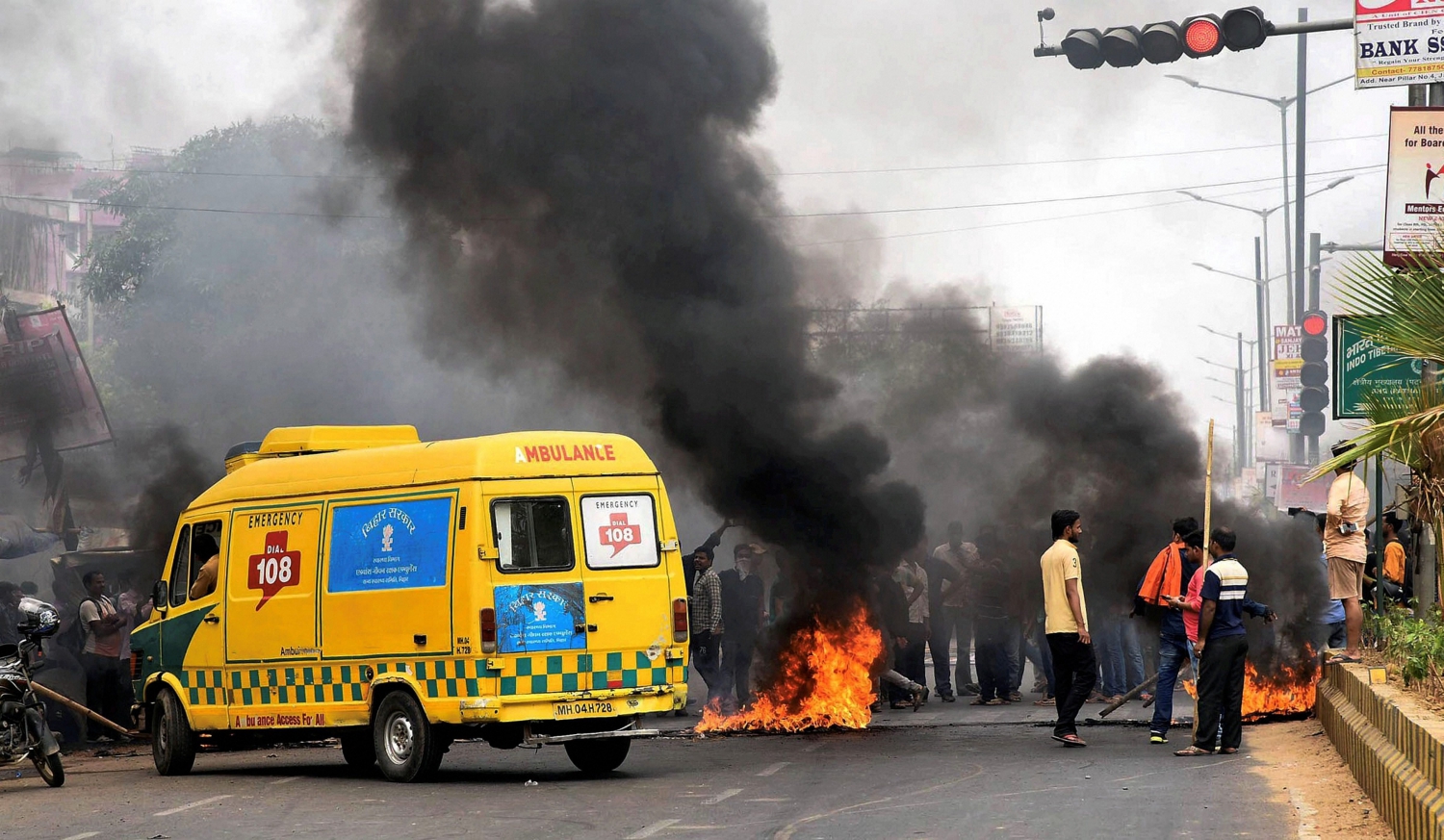 Members of Kshatriya Vikas Samith burn a tyre on a road during Bihar Bandh. Credit: PTI

Bhopal/Jaipur/Lucknow: A nationwide anti-quota bandh call on Tuesday (April 10) received mixed reactions, with shops remaining closed in some parts of states such as Madhya Pradesh and Rajasthan amidst heavy security arrangements, while internet services were restricted in a few sensitive areas.

Reports from Bihar showed attempts to block trains, while some schools suspended their bus services in Bhopal, Madhya Pradesh (MP), which was the worst hit during the April 2 nationwide bandh called by Dalit groups. At least eight people were killed in the protests.

Officials in MP said the call for Tuesday’s bandh was given on social media and no organisation had come forward so far to claim responsibility for it.

In Rajasthan, which was also hit badly during the Dalit groups-convened bandh, the state government has issued prohibitory orders under Section 144 of the CrPC and blocked mobile internet services in the state capital as precautionary measure.

The police chiefs and collectors of districts across the state have been asked to take prompt action if any nuisance is created, officials in Jaipur said.

On Monday, the Union home ministry had issued an advisory to all states to beef up security and prevent violence during the Bharat Bandh against caste-based reservations in jobs and education.

The Ministry of Home Affairs also said the districts magistrates and superintendents of police (SPs) would be personally held responsible for any violence in their area of jurisdiction.

“The situation in the state (Rajasthan) is peaceful,” ADG (law and order) N.R.K. Reddy told PTI in Jaipur.

He said that companies of paramilitary forces including BSF and CRPF have also been deployed at sensitive areas of different districts in the state.

Markets in the walled city area of Jaipur as well as in the areas such as Bajaj Nagar, Barkat Nagar and nearby places were not open on Tuesday.

However, no demonstration or rally has taken place and the situation is quite calm. Private schools were closed and transport vehicles are plying normally.

The authorities in Bhopal have announced daytime curfew in Morena and Bhind, besides enforcing prohibitory orders under Section 144 of the Criminal Procedure Code (CrPC) in Gwalior, Bhopal, Sagar and some other sensitive towns of the state to avoid any untoward incidents.

“We are monitoring the situation. There has been no impact of the alleged bandh so far. The state police is also keeping a watch on the social media,” Madhya Pradesh home minister Bhupendra Singh told reporters.

The internet services too have been blocked in the Gwalior-Chambal region to prevent rumour-mongering, officials said.

Bhopal range deputy inspector general of police Dharmendra Choudhary had said on Monday that social media messages were being monitored.

He had warned that those spreading hate messages would be booked under the Section 188 of the Indian Penal Code for disobedience to order promulgated by public servant.

In Uttar Pradesh, life remained by and large normal and officials said there was no report of any untoward incident from anywhere in the state till around noon.

Tuesday’s anti-quota protest came a week after a nationwide protest by Dalit groups against the alleged dilution of the SC/ST (Prevention of Atrocities) Act by the Supreme Court, entailing massive violence in different parts of the country and leading to the death of nine people.