Amid Crackdown on Bhim Army, UP Government Accused of Double Standards Towards Dalits

Activists question the tough action against the Bhim Army when several members of the dominant castes have been let off the hook. 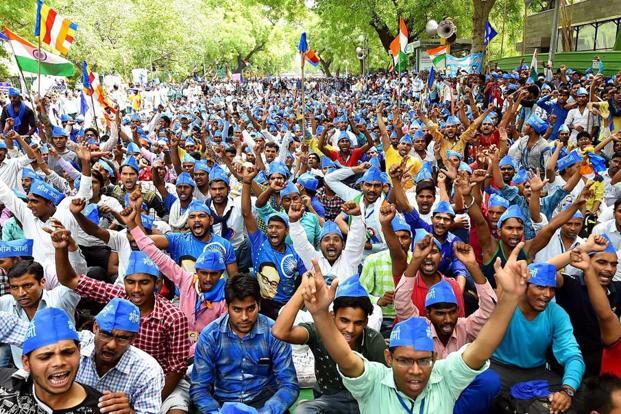 New Delhi: Amidst speculation that the Adityanath-led BJP government may invoke the National Security Act (NSA) against Dalit leader Chandrashekhar ‘Ravan’ Azad, the committee for the defence of Bhim Army – a collective comprising intellectuals, journalists and activists formed in August 2017 – has planned to launch nation-wide protests and sensitisation campaigns to resist such action.

Azad, the Bhim Army chief, has been lodged in Saharanpur prison for almost three months on charges of inciting violence and destroying public property. The 30-year-old lawyer was arrested in Dalhousie, Himachal Pradesh after a series of clashes broke out between Dalits and Thakurs of Shabbirpur village in Uttar Pradesh between April 20 and May 23.

The UP administration has projected the army as having Naxalite links, an allegation that supporters of the Bhim Army have strongly denied.

They have repeatedly said that the Bhim Army, which was founded around two years ago, has been organising educated Dalit youth to resist atrocities against the community and has also started more than 350 private tuition centres for the poor in many villages of western UP.

The committee, in a press conference, accused the UP government of maintaining double standards in dealing with Dalits and Thakurs – the communities which clashed in Shabbirpur. “The state government was quick to announce compensation of Rs 15,00,000 for the aggrieved Rajput family (one of whomse members had died in the clash), but is yet to announce any compensation for the Dalit victims of Shabbirpur village,” a press note by the committee said.

Fifty Bhim Army activists were arrested in the aftermath of clashes, out of which four have still not received bail. The police are looking to arrest two other activists of the Bhim Army, including Vinay Ratan Singh, who has been absconding. The UP administration has announced a reward of Rs 12,000 for any information regarding the two activists. The move has been severely criticised by Bhim Army supporters as both the activists have provided proof to establish that they were not present in any of the clashes.

The reports which claim that the state government was planning to slap NSA on Azad and Bhim Army’s Saharanpur district president Kamal Singh Walia have raised an additional alarm among the sympathisers of the Dalit group.

“Even today, the Dalit families of Shabbirpur face constant threats and are living under duress. Fifty five Dalit houses were burnt during the clash. The state government has adopted an entirely partisan approach against Dalits. In this context, it is important to know that despite being an unreserved constituency, Shabbirpur elected a Dalit sarpanch. This became an eyesore for the dominant Rajputs and led to the clashes,” said Anil Chamadia, a noted media critic and member of the committee.

The crackdown on the Bhim Army started to accelerate after it called for a mahapanchayat on May 9 to protest against the attack on Dalits and the state government’s “insensitive” attitude towards them during the clashes. The government maintains that the meeting was organised without permission but the Bhim Army has said that the permission was withdrawn only in the last moment, which led to widespread resentment among participants, who had already arrived at the protest site.

“Slapping NSA on Azad and Walia is ridiculous as the CCTV footage clearly shows that Azad was trying to pacify the crowd at the protest site on May 9. We are forced to remember the Bhagana rape episode in which Dalits were raped but also were the ones who had to face charges of sedition,” said one of the coordinators of the committee, Pradeep Narwal, adding that Azad has been facing regular casteist abuse and threats in prison.

Noted human rights lawyer Colin Gonsalves said that the FIRs filed against Bhim Army activists did not mention any charges of possessing weapons or causing injury to public and police personnel. “Even the video footage on May 9 protest does not show any criminality of that kind. Having NSA slapped on the activists, who were merely protesting, will be great injustice.”

Saharanpur-based lawyer Harpal, who was instrumental in securing bail for most activists, said that the administration’s double standards are there for everyone to see. “While Dalit activists are facing such grave charges despite the fact that the violence was initiated by the dominant castes, the Rajputs have got a good deal. Only two of the Rajputs are facing cases of rioting and destroying public property. While Azad may face NSA, the BJP MP Raghav Lakhanpal, who played the most important role in provoking the upper castes in Saharanpur against Muslims, is free.”

Harpal was referring to a separate incident in which Lakhanpal organised a Shobha Yatra in Sadak Dhudhli village of Saharanpur in April without due permission. The march saw rioting by BJP activists and created communal tensions between Hindus and Muslims in the area.

Contextualising the alleged attack on the Bhim Army, filmmaker and committee member Nakul Singh Sawhney said, “One must understand that the Bhim Army has initiated a new alliance of Dalits and Muslims in areas where they are active. This can pose a great challenge for the Sangh parivar in the future. In my visits to western UP, I have found that many Dalits who had joined the Rashtriya Swayamsevak Sangh in the last few years are now joining the Bhim Army that views upper caste violence in UP villages as saffron terror. It is this ground-level political reality that explains the high-handed action against the Bhim Army.”