The singer's studio was burned down, and his family has become the target of death threats. However, no arrests have been made in the case despite the fact that an FIR was lodged in October 2020.

Vishal Ghazipuri and Sapna Baudh have released 100 albums so far, and their themes often revolve around issues afflicting the nation. Photo: By special arrangement.

Ghazipur: Singers Vishal Ghazipuri and Sapna Baudh, a couple known for songs that promote B.R. Ambedkar’s ideas, have been living in hiding for the last two months after ‘upper’ caste musclemen of their village burned down the duo’s studio on October 29 and threatened them with murder.

Vishal’s and Sapna’s songs address issues like privatisation and unemployment and include tracks titled Aaya Desh Vikreta (‘Here comes the seller of the country’), Nijikaran Dhokha Hai (‘Privatisation is a scam’) and Ek tha Hitler, Ek hai Jhootler (‘First there was Hitler, now there’s a liar’).

Although an FIR has been registered, no arrests have been made so far. As a result, the couple had to flee with their two-year-old child, fearing for their lives.

Vishal Singh Badal, alias Vishal Ghazipuri, and Sapna Baudh are residents of Vishnupur village in Ghazipur’s Nonahra police station area. They live in the studio they set up two kilometres away from the village. Vishal, whose parents earn their livelihood from two acres of land they borrowed for farming, graduated from a college in Jaunpur after which he studied music in Allahabad.

While pursuing a diploma course from the Banaras Hindu University, he came in contact with Ramji Rao, who is associated with the management of Ravidas School. Rao gave him a place to stay and offered him a job as a music teacher at the school. He also introduced Vishal to the teachings and ideas of B.R. Ambedkar, Jyotiba Phule, Chhatrapati Sahuji, Savitribai Phule and Kanshiram and motivated him to promote their teachings and create awareness through music.

Vishal started as a mission singer in 2014 and began writing songs to promote the teachings of Dalit and Bahujan thinkers.

Also read: How Did the State Come to Legitimise Vigilante Action?

In 2016, Vishal met Sapna at a programme in Siddharthnagar district where both of them were invited to perform. Sapna hails from Siddharthnagar’s Dhebrua region. They continued to meet afterward and sang songs together at several programmes. The couple married a year later and now have a two-year-old child. 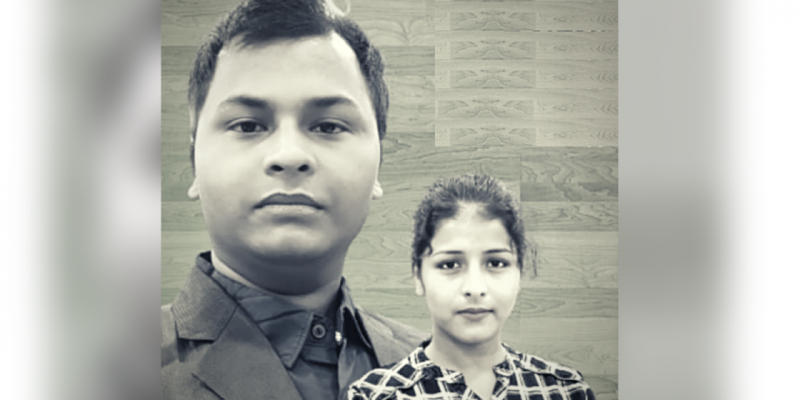 Vishal and Sapna have released 100 albums so far, the most popular of which are Suno Sipahi Bhim, Jai Bhim Namo Buddhae, Yuddh Nahin Buddh Chhahiye and Bhim Diwanon Chalo Buddh Ki Ore. Famous for their mission songs, the duo then began composing songs centred on issues afflicting the country, pointing out the flaws of the nation’s top leadership.

For instance, the translated lyrics of the song Aaya Desh Vikreta (Here Comes the Seller of the Country) are as follows:

When our Bharat was scattered in fragments, Chandragupta made it akhand (whole)

Bhimrao then raised it in stature further with his pen

Who is selling off the country, and is known by the name of seller

“I will bring back black money,” he claimed, but ate up the country’s treasure

The tax of the rich is waived, while labourers die of hunger

He usurped crores of rupees yet calls himself a fakir, a beggar

The lyrics of Ek tha Hitler, Ek hai Jhootler, written by song writer Chandan and sung by Vishal and Sapna, speak of the crippling of constitutional institutions:

Once there was a Hitler, now it is Jhootler

One destroyed Germany, ruined India, the other

Peddling the dreams of good days, he pushed us into a cesspit

ED (Enforcement Directorate) and EC (Election Commission) are his pawns, media is merely a puppet

He has scared even the judiciary into submission

From time to time, he tests even his bhakts (believers) and their devotion

He makes them bang thaalis (steel plates) and taalis (applause), when a calamity erupts,

Fed on the poison of communalism, he has erected an army of bhakts

He promised jobs, but rendered crores of people jobless

Once again, Chandan, the debts of India have mounted up to trillions

Ek tha Hitler, Ek hai Jhootler became an instant hit, but soon brought the duo into the crosshairs of the ‘upper’ caste musclemen of the area. On October 27, after Vishal received death threats on calls from four different mobile numbers, he informed the Nonahra police station about it. Two days later, on October 29, people began banging at the studio doors hurling abuses and threatening him for singing such songs. Then they set fire to the flex banners and flag installed outside the studio.

Vishal submitted a written complaint to the Nonahra police station regarding the incident. The police registered a first information report (FIR) against Digvijay Singh, Rishi Awasthi and two unidentified persons under sections 506, 507, 435 and 32 of the Scheduled Castes and the Scheduled Tribes (Prevention of Atrocities) Act.

A day after the FIR was registered, Vishal received three threat calls. On October 31 and November 4, Vishal received death threats again on his phone and the threats have not stopped since. Even two months after registering the FIR, no arrests have been made.

Vishal says that he has written to the superintendent of police seeking security from him and his family. Upon his visit to his village, after he had left it for good, he received another threat call from whom he calls as ‘andh bhakts’ (blind believers).

Vishal has also sent letters to the district magistrate, the state human rights commission, the SC/ST commission and the director general of police (DGP), demanding action against the musclemen and asking for security.

When he started out as a singer, Vishal had aspired to the kind of fame received by Bhojpuri actors and singers Manoj Tiwari and Ravi Kishan. But when he learned about the Ambedkarite movement, he decided to dedicate his life to Ambedkar’s mission. “We are promoting Baba Saheb’s mission with our songs,” says Vishal.

He is ready to talk and debate with those who object to his songs, he says, because violence is not the correct way to respond to things one does not like. He claims to believe in non-violence and says he will continue to work for Baba Saheb’s mission despite growing threats.