After School Bags and Booklets, Now Buses in Adityanath's UP Turn Saffron

The bus service is to connect interior areas of the state, where the BJP government is planning to build “gaurav paths,” or link roads to villages of martyred soldiers. 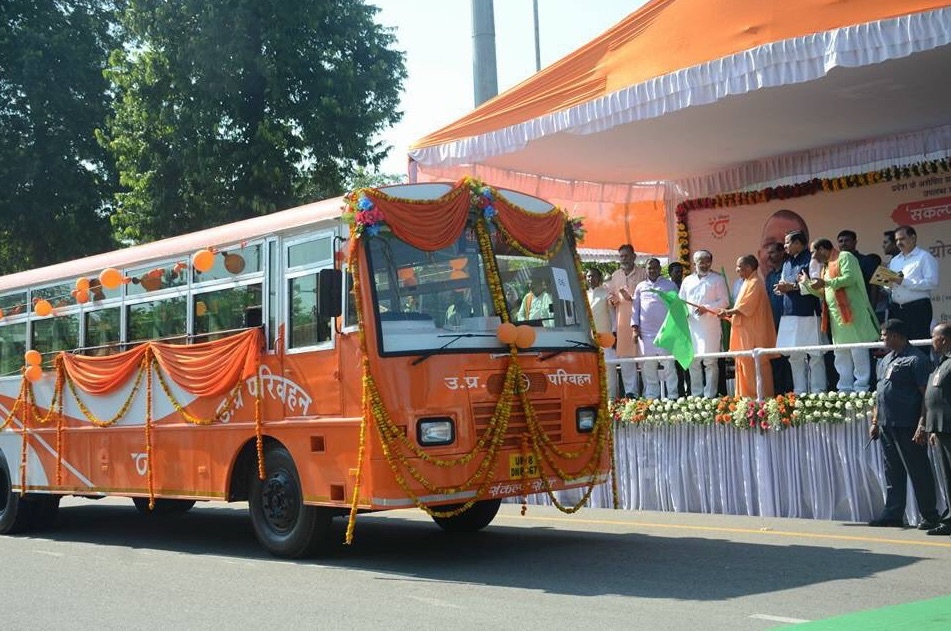 New Delhi: Following the distribution of saffron school bags and booklets, Uttar Pradesh chief minister Adityanath on Wednesday flagged of a fleet of 50 buses painted saffron, according to reports. The buses will provide better connectivity to rural areas of the state.

The bus service, called Sankalp, to be run by the UP State Road Corporation, is to connect interior areas of the state, where the BJP government is planning to build “gaurav paths,” or link roads to villages of martyred soldiers, the Hindustan Times reported. The project is part of the government’s plan to provide public transport to 40,000 villages in the next four years, and is going to start with Varanasi, Gorakhpur, Kanpur, Allahabad, Bareilly and Moradabad. Currently around 1,500 buses under the Sankalp scheme provide transport to 16,000 villages.

Over the last few months, the Adityanath government has been handing out saffron-coloured certificates, including to sportspersons in August and for the state’s Crop Loan Redemption Scheme as well, reported the Indian Express. The Basic Education Department had distributed saffron school bags in government primary schools, to replace ones carrying former chief minister Akhilesh Yadav’s photograph.

Besides this, booklets that were distributed to mark 100 days and six months of the Adityanath government were saffron in colour as well. The government’s information department diary, which has contact details of ministers and offices, has photographs of BJP ideologue Deendayal Upadhyaya, Prime Minister Narendra Modi and Adityanath, and is saffron. The diary used to be red in colour during the time of the Samajwadi Party and blue when Mayawati’s Bahujan Samajwadi Party was in government. The blue straps of identity cards of the Secretariat Administration department has also been replaced with saffron ones, said the report.

In August, the UP government had distributed a 70-page ‘General Knowledge Competition’ booklet to school students, covering topics like nationalism, Hindutva, RSS ideologues and leaders including Upadhyaya, K. B. Hedgewar and Syama Prasad Mookerjee.

Cabinet minister and government spokesperson Shrikant Sharma told the Indian Express, “We like all the colours, but saffron is our favourite because it represents tyaag, balidaan aur shaurya (sacrifice and bravery). The national flag also has saffron. Saffron is our personal choice and nobody should have any objection to it.” He added that the government had not taken any conscious decision to switch to saffron colour, “It is merely a coincidence. This government is for all, and people from all sections benefit from our schemes. Discrimination was done by past governments only.”