A Historic Congressional Hearing on Caste in the US

The May 22 briefing pointed the congressmen and women to findings of a web-based self-reported survey of nearly 1,500 respondents. 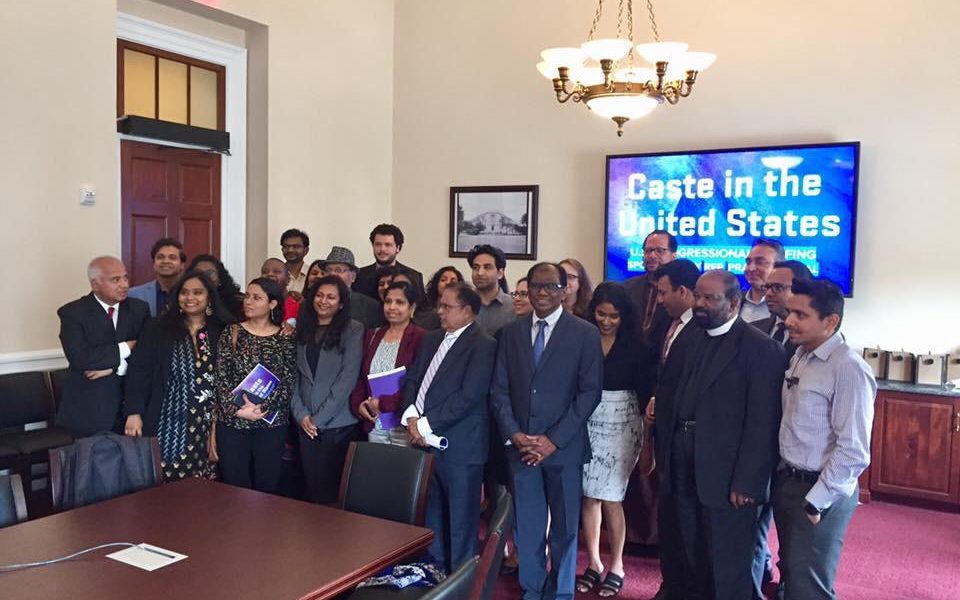 After the Congressional hearing on caste. Credit: Mariya Salim

A day before the Indian election results were announced, Equality Labs, in partnership with South Asian Americans Leading Together (SAALT), API Chaya and the office of representative Pramila Jayapal, held a congressional briefing on caste discrimination in the United States in Washington DC.

The May 22 briefing came about as a result of a caste survey that Equality Labs conducted in 2016-2017, where the organisation wanted to gather quantitative data on the existence of caste within the South Asian diaspora in the US. Mere anecdotal data was not enough for thorough advocacy around the issue, and a deeper understanding of how caste operates within the diaspora was needed.

“The decision to do an in-depth analysis around caste within the diaspora was in the face of being in the thick of the California textbooks battle, where there were public attempts to remove the word caste from the curriculum, replace it with class and to remove the word Dalit. There were also attempts to present Islam as only having a very singular entry into South Asia, one that was based on merely conquests. It was also representing Sikhs and Buddhists as types of Hindus,” said Maari Zwick-Maitreyi, who was present at the briefing and also the principal researcher for the survey.

The California textbooks battle finally saw the state board of education give in to a Hindu “upper” caste notion of Indian history. Guru Nanak’s opposition to caste system, for instance, was absent, despite Sikhs in the diaspora asking the board to include it.

To oppose this one-sided view of South Asian history, Dalit, Adivasi and other caste-oppressed communities along with Muslims, Sikhs, Christians as well as Hindu allies formed a united front. They lobbied with the California Board of Education to revise inaccurate statements on caste and on religions other than Hinduism.

Learnings from the hearing

The May 22 briefing pointed the congressmen and women to the findings of the web-based self-reported survey of nearly 1,500 respondents. The 47-question survey sought to find the extent to which caste plays a role in workplaces, educational institutional and religious spaces.

This was the first time caste discrimination in the US was being acknowledged and openly discussed by congressional staff.

“We had representatives from all of the major progressives, including the briefing being hosted by Pramila Jayapal, US representative from Washington’s 7th congressional district. We had community leaders from over 15 states present, who are also visiting their representatives after this briefing to share findings. The road of this journey begins with Dr B.R. Ambedkar and Mangu Ram Muggowalia. It is also powerful that this briefing was spearheaded by a Dalit feminist organisation, Equality Labs, in an interfaith and inter-caste partnership with SAALT (South Asian Americans Leading Together) and API Chaya from Pramila Jayapal’s home district,” said Thenmozhi Soundararajan, executive director of Equality Labs.

At the hearing, Alexandria Ocasio-Cortez’s chief of staff was among those present. The office of Pramila Jayapal sponsored the briefing. Sources on the hill said that while Congressman Ro Khanna, the representative from California’s 17th congressional district, had initially “enthusiastically” agreed to co-sponsor the briefing, his office pulled out at the last minute because of “pressure from many influential Hindu groups”.

Also read | Explainer: Significance of the Supreme Court’s Nod to Reservation in Promotions

The briefing had five speakers who gave testimonies about their experiences of caste discrimination, ranging from caste in the workplace to caste in immigration. Their stories highlighted how deeply entrenched it is, as well as how caste interplays with gender. People reported that their children were being called ‘dirty Chamars’ in playgrounds, and there were parents who said that there have been many instances where South Asian families have backed out of playdates after realising that the other child is a Dalit.

“Many of those who were part of our survey in 2016 reported feeling guilty of hiding their caste for the fear of facing discrimination and said they wished they could be more courageous. As many as 52% Dalit and 25% Shudra respondents said they were worried about their caste being outed. This dilemma wreaks havoc on mental health, specially for children,” Maari told me.

The briefing brought to light how in colleges, “upper” caste students refuse to share rooms with Dalits. Campuses also often have Hindu students’ associations, leaving out all those who do not adhere to “upper” caste Hindu practices and culture. People also said they do not report caste discrimination in the workplace because the HR department does not understand the issue.

“Having more competency around understanding caste will help government stakeholders address the issue with a vision and not merely be reactionary. In making this congressional briefing a reality, we faced a lot of opposition from ‘upper’ caste organisations who tried to get it cancelled, up until the last minute. They failed to realise that caste-oppressed Americans are a crucial part of American progressive movements, and our allies stood strong with us to make history. On the tail end of the Dalit history month, we have one glimmer of possibility,” said Soundararajan.