The company's board says the primary reason for his exit was Murthy's latest letter claiming "corporate governance" issues and Sikka not being CEO material. 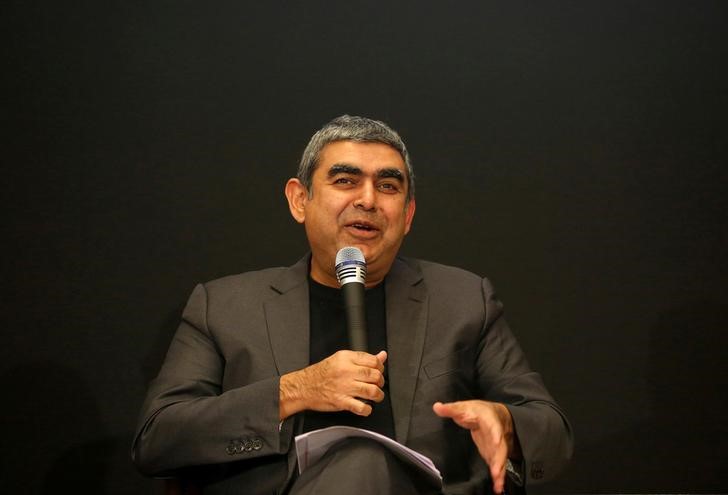 Vishal Sikka speaks with the media during the announcement of Infosys's quarter results at its headquarters in Bengaluru, India, April 13, 2017. Credit: Reuters/Abhishek N. Chinnappa/Files 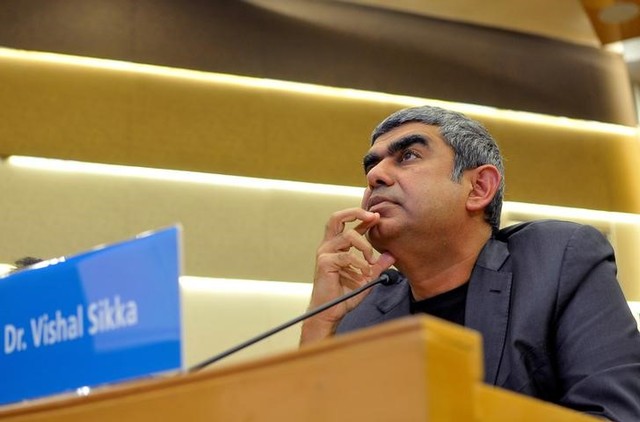 New Delhi: Infosys CEO and managing director Vishal Sikka has resigned, according to a company filing registered with the Bombay Stock Exchange on Friday (August 18).

The decision to resign appears to have been sparked by the seven-month-long confrontation between some of the company’s founders on one hand and Sikka and the board on the other.

The founders, who still own 12.75% of the firm, had questioned a pay raise granted to Sikka and the size of severance payouts given to others, including its former finance head Rajiv Bansal.

In a blogpost published shortly after his resignation was made public, Sikka stated that the “very public noise around us” had created an “untenable atmosphere” that prevented the management from functioning effectively.

According to the company’s filing, Infosys’s chief operating officer U.B. Pravin Rao has been appointed as the interim CEO under the overall supervision and control of the company’s board.

“In his notice of resignation to the Board, Sikka reiterated his belief in the great potential of Infosys, but cited among his reasons for leaving a continuous stream of distractions and disruptions over the recent months and quarters, increasingly personal and negative as of late, as preventing management’s ability to accelerate the Company’s transformation,” the company said in its regulatory filing.

“The Board understands and acknowledges Dr. Sikka’s reasons for resignation, and regrets his decision. In particular, the Board is profoundly distressed by the unfounded personal attacks on the members of our management team that were made in the anonymous letters and have surfaced in recent months. As the Board has previously stated, a series of careful investigations found no merit to the unsubstantiated and anonymous allegations that had been asserted. The Board denounces the critics who have amplified and sought to further promote demonstrably false allegations which have harmed employee morale and contributed to the loss of the Company’s valued CE,” it further added.

A portion of Sikka’s resignation letter, where he talks about personal and negative attacks that hindered the management’s ability to perform.

Over the last six months, the founders of Infosys (Narayana Murthy, Kris Gopalakrishnan and S.D. Shibulal, among others) who don’t sit on the board but own a substantial portion of the company’s stock (roughly 13%) have raised issues of corporate governance, setting off a rather public confrontation with Sikka and the company’s board.

Issues that the founders took offence to included higher salary hikes for Infosys senior management, the severance package given to former CFO Rajiv Bansal and allegations of impropriety in the 2015 acquisitions of Panaya and Skava Systems. Over the last two years, Infosys hired a number of external law and investigation firms to carry out three probes and also conduct an independent valuation of Panaya.

Legal firms Cyril Amarchand Mangaldas and Latham and Watkins carried out two probes (October 2015 and August 2016) to investigate if there was any impropriety in the board’s decision to give Bansal the generous severance payment. A third probe by international law firm Gibson and Dunn investigated if any Infosys executive profited from Panaya acquisition. The company has consistently maintained that none of the investigations have found any wrongdoing, although the four reports and their conclusions have not been made public.

In April of this year, it appeared as if most of the issues had been settled, with Ravi Venkatesan joining as co-chairman of the board. In July 2017, however, Murthy emailed the board, asking that the investigation reports be made public.

On Friday morning, Mint reported that Murthy had claimed that “atleast three independent directors of the company” felt that Sikka was more CTO (Chief Technology Officer), rather than CEO material.

Just an hour after Sikka’s resignation today, the board came to his defence, stating that Murthy’s “continuous assault” was mainly why the CEO had stepped down “despite strong Board support.”

In a manner of countering Murthy’s claims that Sikka was not CEO material, the board also said that since Sikka was appointed as the MD and CEO of Infosys in August 2014, the company had “delivered competitive financial performance through profitable revenue growth.”

The board also said that Murthy’s letter is factually incorrect and misleading and includes “already-disproved rumours and statements extracted out of context from his conversations with Board members.”

Sikka was very unlike former Infosys CEOs in that he is not one of its founders and spends more time in the US, from where the company gets the bulk of its revenue.

Known for his charismatic manner, Sikka can be frequently seen wearing black t-shirts and a blazer in contrast to his suit-clad peers, reminiscent of a style made famous by Apple founder Steve Jobs whom Sikka quotes in the blog post.

Since Sikka came to the helm of Infosys on August 1, 2014, shares of the company have jumped more than 20%, as of their close on Thursday, outperforming the about 5% gain in the Nifty IT index. The firm’s market value surged by $4.6 billion to $31.78 billion over the period.

“There is some level of uncertainty as we wait till the new CEO and managing director comes in, and it does put the company in some form of uncertainty in terms of strategy,” said Apurva Prasad, analyst at HDFC Securities.

Sikka had set an ambitious 2020 revenue target of $20 billion for Infosys. But it is likely to struggle to reach this goal as the $150-billion Indian IT services industry battles a slowdown in new deals from western clients, and braces for changes to work visa rules in the United States.

Infosys, which counts Apple, Volkswagen and Wal-Mart Stores Inc among its customers, has under-performed the Nifty IT index this year amid public attacks from its founders and the US challenges.

“Sikka was trying to change the way we do business,” said an Infosys engineer. “He was trying to make Infosys an innovation-driven company, not a commoditised service provider it has come to be known for,” the employee said, asking not to be named because of the sensitivity of the issue.

Sikka’s resignation comes a day ahead of a board meeting that could green light a major share buyback. In April, Infosys said it would return up to 130 billion rupees to shareholders in the fiscal year ending March 2018.

“This does not augur well for the future of the company, for the shareholders, big and small, and more importantly for the employees,” Gaurang Shah, head investment strategist at Mumbai-based brokerage Geojit Financial Services.

Sikka’s resignation is the second major instance in the past year where Indian promoters have wielded control over the company after handing over the reigns.

In November, Cyrus Mistry, the then top boss of Tata Group, India’s biggest conglomerate with businesses ranging from cars to steel mills and salt pans, was unceremoniously ousted in a boardroom coup over differences between him and the Tata family patriarch.

Sikka’s resignation letter has been reproduced below:

Over the last few days, since our earlier call, I’ve met Sesh several times, talked to you individually at length, and spent time thinking things thru with Vandana. During this time, one of our employees, Sandeep Karamongikar, died in his sleep, likely of a massive heart attack. He was working on the chatbot frontend in Nia. Also over the weekend, in possibly the greatest demonstration of AI capability ever, a bot built by the researchers at OpenAI (yes, that OpenAI), defeated the world’s best players of DOTA2, a multiplayer online video game, a game where the bot learned to play entirely from scratch. Further demonstrating that the force to automate routine, even advanced, activities is an unstoppable and exponential one. And the Charlottesville incident here in the US demonstrated once again the power of words and silences to cause real damage, or to heal.

After much reflection, I have concluded that it is indeed time for me to leave my current positions as MD and CEO, and I have communicated my resignation to Sesh. I will be working closely with Sesh, Ravi, Pravin, with all of you, and the senior management team to plan out the details and the timelines to ensure a smooth transition and in the meantime, continue our work without disruption, and ensuring that we protect our company, the employees, the clients, and the interests of every shareholder. You can count on my commitment to this.

I came here to help navigate the company through what I saw as a massive transformation opportunity, to transform our company and restore strong profitable growth, as well as help transform the business of our customers. I came to do this with the power of technology, given my experiences with similar transformations, my background in AI, and the structural changes that I saw happening in the IT services industry. This needed new skills, new thinking, new initiatives, and a transformation in the culture, from a cost-oriented value delivery, to entrepreneurship oriented value delivery. You have heard me articulate this many times before. This type of a transformation has always been a passion for me, indeed I took this job for this reason. We have achieved much in the last 3+ years, and for sure we can all be proud of the powerful seeds of transformation that have already been sowed. No one anticipated the additional headwinds like the geo-political disruptions (Brexit, Trump, visa etc.) that made this transformation even more challenging, but also rewarding. But, the distractions that we have seen, the constant drumbeat of the same issues over and over again, while ignoring and undermining the good work that has been done, take the excitement and passion out of this amazing journey. Over the last many months and quarters, we have all been besieged by false, baseless, malicious and increasingly personal attacks.

Allegations that have been repeatedly proven false and baseless by multiple, independent investigations. But despite this, the attacks continue, and worse still, amplified by the very people from whom we all expected the most steadfast support in this great transformation. This continuous drumbeat of distractions and negativity over the last several months/quarters,inhibits our ability to make positive change and stay focused on value creation. Addressing the noise by itself is damaging; hundreds of hours of my own time has gone into this recently. But the structural challenges this engenders within the organization, has a very damaging effect on our ability to carry out any kind of a transformation, especially one that is as fundamental as transforming from a cost-oriented to an innovationoriented value delivery to clients.

Therefore, I have come to this moment and the end of this journey. I hope that it gives everyone a chance to reflect, and give the transformation effort another big push and move the company forward rapidly to build its future, to build upon the foundation that we have laid over these past 3 years. If these types of attacks continue, I hope each of you will continue to be the voice of fairness and reason – providing the active, emphatic and unequivocal support that the company, the management, the employees, and all of the stakeholders and friends of the company need in order to succeed. Since the board deeply believes in the cause we have started, I will be happy to support all of you to achieve a smooth transition, and serve as your Executive Vice Chair as discussed.

I would like to thank each one of you, my dear colleagues, my friends and mentors, and look forward to working with you to close this chapter and open a great new one for all of us.