Amidst Reports of Cash Crunch, Snapdeal Woos Staff With Promises of Profit

Like most e-commerce players in India, Snapdeal is burning cash to sustain discounts – and keep customers – in a cut-throat online market.

Employees of Snapdeal, an Indian online retailer, sort out delivery packages inside their company. Credit: Reuters 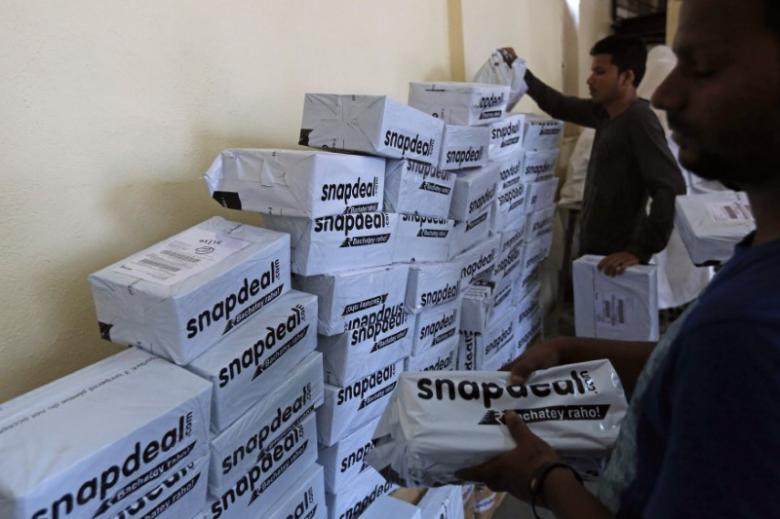 Mumbai/New Delhi: Seeking to calm employees rattled by reports of a cash crunch, the founders of Indian online retailer Snapdeal have gone directly to them with a string of townhall meetings in past weeks, according to sources, promising profit and brushing off takeover talk.

The sources, familiar with the group, declined to be named as the meetings were not public.

Like most e-commerce players in India, Snapdeal is burning cash to sustain discounts – and keep customers – in a cut-throat online market. But as the number three player, it also is under growing pressure from investors and its own employees to consider its bottom line, as well as market share.

One of the sources said there had been at least five townhalls in recent weeks, with founders Kunal Bahl and Rohit Bansal delivering motivational speeches.

“It was only profitability and profitability,” one source said, describing answers to questions from employees whether the company was a takeover target.

India’s booming online retail sector is led by homegrown player Flipkart – now followed by Amazon, after the US giant overtook Snapdeal’s sales volumes a year ago.

Thanks to its deep pockets, Amazon has been an increasingly prominent investor in India, compensating for its mistakes in China, where it has been all but squeezed out by aggressive local rivals with a better grasp of demand.

It has so far come back empty handed.

Snapdeal expects to turn profitable in two years and is eyeing a market listing around the same time.

But the China setback, and a valuation that has dropped from a peak of $6.5 billion last year, has unsettled some staff.

Two employees and three people familiar with Snapdeal’s internal discussions said there were concerns over the group’s direction, as well as over contradictory messages from investors – some seeking profit, others growth – and, increasingly, over potential senior-level departures or cuts.

Headhunters like Sinosh Panicker, a partner at Hunt Partners, said some of his clients had witnessed a jump in applications from Snapdeal employees.

Some employees cite concerns after the departure of 600 staff in February, laid off from Snapdeal, its logistics arm Vulcan Express and payments unit FreeCharge.

Snapdeal declined to comment on staff exits or sentiment, but said its annual appraisals were currently underway, and staff would be offered incentives.

In a letter to employees late last month, co-founder and chief executive Bahl said that Snapdeal, in which Japan’s SoftBank is also an investor, was on the right path, despite differing views from some investors.

“Investors in our industry need to understand that driving indiscriminate growth at any cost doesn’t create long-term value,” Bahl wrote in the letter.

A spokeswoman for SoftBank in India declined comment while other Snapdeal investors – Nexus Venture Partners and Kalaari Capital – did not respond to Reuters queries. Alibaba has not commented on Snapdeal.

Snapdeal clocked up losses of 29.6 billion rupees ($456.5 million) in the fiscal year to March 31, 2016. Flipkart’s wholesale unit and its online marketplace made a combined loss of 28.5 billion rupees in the same period.