Volumes during August were dragged down by the top two manufacturers, which together sell more than seven in every 10 trucks. 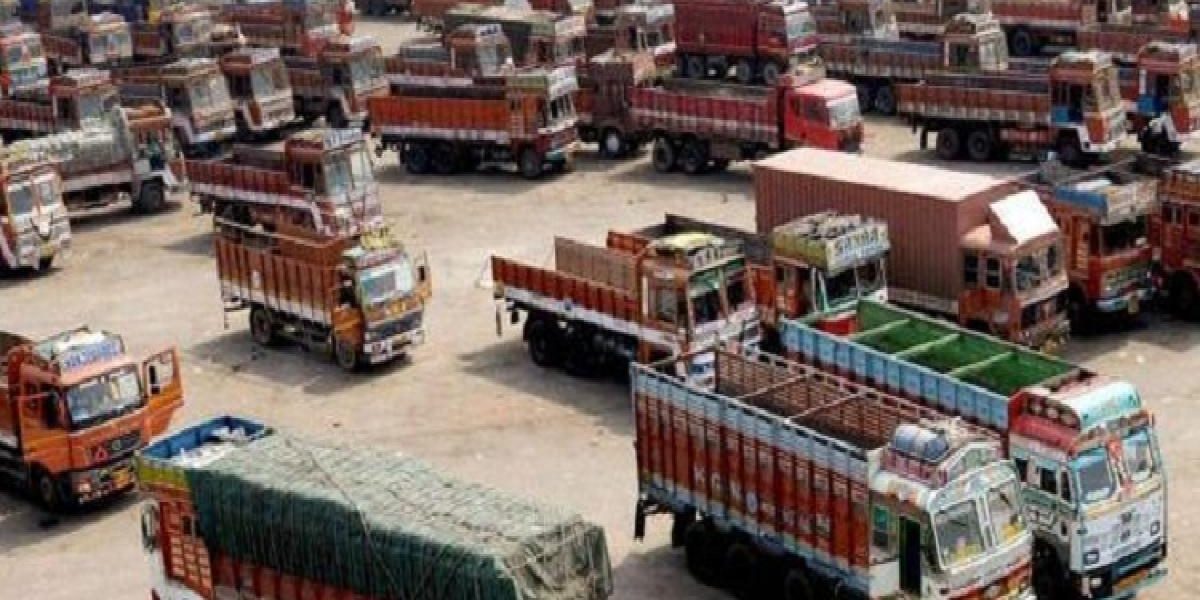 India’s economy grew by 5% in the June quarter, the slowest in over six years. The manufacturing sector fared worse, growing at an abysmal 0.6%.

The overall volume at India’s top four M&HCV makers – Tata Motors, Ashok Leyland, Volvo Eicher, and Mahindra & Mahindra – fell 59.5% to 31,067 units during the month, compared with the year-ago period. In desperation, truck makers are offering discounts up to Rs 9,00,000 on high-tonnage (above 49 tonnes) duty trucks.

Companies are now hinging their hopes on the festive season and a pre-buying ahead of the implementation of BSVI emission norms, which take effect on April 1, 2020.

Volumes during August were dragged down by the top two manufacturers, which together sell more than seven of every 10 trucks. While the market leader, Tata Motors, saw a year-on-year decline of 58% to 5,340 units in heavy-duty trucks, sales of high-tonnage trucks at Ashok Leyland fell 70 per cent to 3,336 units.

Wagh said Tata Motors would focus on retail, even as it continues to align production to demand. He said the company’s retail sales during the month were ahead of wholesales by almost 25%. 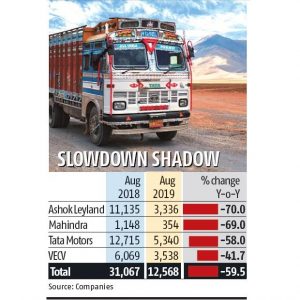 “We are looking forward to a positive impact of the recently announced stimulus package by the government,” he said.

Volumes at Volvo Eicher Commercial Vehicles (VECV) and Mahindra & Mahindra also contracted 41.7% and 69%, respectively. “Despite all the gloom and doom, we remain hopeful that festivals and a pre-buying ahead of BSVI will help truck sales,” said Vinod Aggarwal, managing director at Volvo Eicher.

But not everyone is hopeful. “The truck industry is in a very poor condition. It’s a desperate situation. Discounts of Rs 8,00,000 to Rs 9,00,000 are unheard of. Don’t think sales will improve unless consumption revives and the economy improves,” said Rajan Wadhera, president of the Society of Indian Automobile Manufacturers (Siam).

Shamsher Dewan, vice-president and sector head – corporate ratings, ICRA, said discounts on new CVs continued to remain, ranging between 10-15% of the ex-showroom prices. Dewan said retails, too, remained weak across regions as demand from all major end-user segments remained tepid, resulting in a further increase in average discounts. “Large players in the segment are resorting to a very high discount,” said Dewan.

On whether the accelerated depreciation benefit announced by Finance Minister Nirmala Sitharaman, as part of the stimulus package, would help, Wadhera said, “A truck is not a Rolls-Royce that one will buy and park to show it off. Unless there are enough goods to be moved and there is a pick-up in the economic activity, no transporter will invest in a truck. It doesn’t matter whether the depreciation is 15% or 30%.”

Meanwhile, movement of truck fleets also got impacted by floods in several states, which, in turn, cut the arrival of fruits and vegetables in the Agricultural Produce Market Committees (APMCs). At the same time, factory gates at most of the industrial clusters turned in 25-30% lesser goods, said the Indian Foundation of Transport Research and Training in a note on Tuesday.