When will we be able to engage with Bioendev and other similar companies with same confidence, objective and clarity that we deploy to engage with Saab International?

King Carl XVI Gustaf and Queen Silvia of Sweden during a visit to the Gandhi Smriti in New Delhi on December 2, 2019. Photo: PTI/Atul Yadav

The royal couple will be accompanied by quite a few Swedish business representatives and have a packed agenda. This visit is an interesting reason to examine India’s engagement approach with two Swedish companies.

These two companies can’t be more divergent in their nature of businesses. The first is Saab International, which has responded to the Indian government’s 2018 tender to supply 114 multi-role combat planes. Saab has aggressively pitched its star product – Gripen fighter jet on an “extremely cost effective” platform through a partnership with a domestic company and offers to manufacture Gripen in India. The company is in a race with four other contenders for this contract, all of which are without doubt some of the best fighter jets that the world currently offers. The multi-billion dollar scale of this contract makes it a mouthwatering opportunity for all these five players to put their best foot forward.

The state visit of Swedish royal couple can therefore be construed as a courtship effort for the Gripen.

The installed expertise of defense procurement framework of India to execute such a contract – controversies not withstanding – is competent. After all, India’s annual defense outlays is among the world’s largest. When procurement process is subjected to such vast outlays and exposes you to the best of technology and capabilities that money can buy from Israel to US and from France to Russia, the ability to source the “best” on your terms can’t be questioned.

It is this heft that also allows India to imagine the rise of a domestic defense industry through partnerships with technology leaders like Saab with the aim to not only satiate the country’s thirst at a cheaper cost but also of its friends.

Also read: Sweden Joins EU, US in Calling for Removal of Restrictions in Kashmir

Domestic private capital is already wide awake and going after this opportunity with all guns blazing to get a pie of this action, while public market keeps a close eye to spot the next multi-bagger in the nascent but growing sector. Only time will tell whether the royal visit of the King and Queen of Sweden was fruitful to Saab and its Indian partner or not.

This brings us to the second Swedish company that will putting up its skills on display in Mohali, Punjab in the presence of the royal couple and Prime Minister Narendra Modi. The company is Bioendev, which recently signed an MOU with National Agri-Food Biotechnology Institute, Mohali in a 50:50 partnership with Government of India.

The “pilot” project will produce ‘green coal’ with paddy straw and without any carbon footprint. This green coal can then be used as ‘energy pellets’ – a cool technology indeed to solve the problem of stubble burning that ensues air pollution in North India every winter. It is hoped that this pilot project will include in its scope the mechanism for the stubble to be collected, aggregated and shipped to such a facility when this venture is ready to be scaled up for a wider deployment. 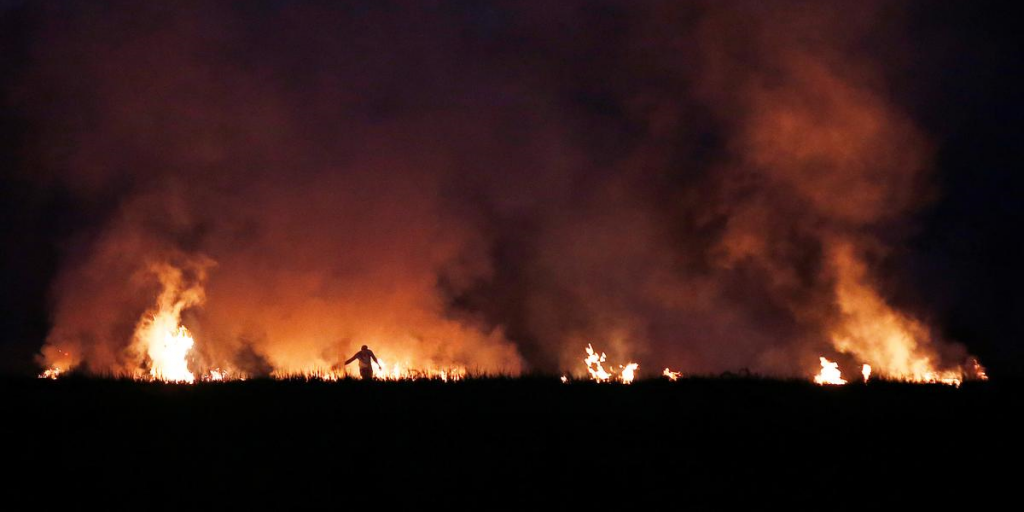 A farmer burns the stubble in a rice field in Karnal in Haryana, October 9, 2018. Photo: Reuters/Adnan Abidi

Such optimism aside, India’s approach in how it engages with Bioendev is in sharp contrast to that it takes with Saab. This exposes us as a society with misplaced priorities.

With Saab, our ambition is clearly stated in the language of money, backed by technical competence to seek the best solution available. We are sure of our challenges and Saab is leaving no stone unturned to impress upon us that Gripen is the best suitor to address them. Businesses are chiseling their plans; the public market is following the opportunity like a hawk and there is hope that the opportunity will become a supplier of high quality jobs.

But Bioendev emerges more as a tutor who has been extended an invitation to teach us and show us the path out of our misery. We merely stand as helpless students with no will or imagination to fight and solely rely on the tutor to pull us out of our abyss. The quantum of paddy waste stands at 35 million tonnes per annum and that is by no means a small scale.

But, the engagement model with Bioendev is a pilot exploration in an academic setting. No doubt the plant is big, the technology cool and the step right but just contrast this engagement with Saab in which everything from procurement to technology, from capital to stated outcome is defined, certain and assured. The engagement with Bioendev and other similar companies is a far cry from this clarity. Neither there exists any domestic private capital chasing Bioendev nor is the public market keeping an eye on the pilot.

We are still piloting our solutions when it comes to pollution, whereas this new enemy is now claiming lives and destroying ecology at a scale and intensity that is far more sinister than the perceived threat from our neighbours.

When can we engage with Bioendev with same confidence, objective and clarity that we deploy to engage with Saab? The answer lies in a refreshed template of policy design that can prioritise the issue of pollution at par if not greater than the need to buy a Gripen.

We need the disposition of urgency and clarity that can state our challenges with pollution and sanitation in the language of economics and scientific excellence. We need to think of these challenges as an opportunity to address our perpetual struggle with job creation and economic growth. We need to appreciate that we can convert these challenges into multi-billion dollar formal sectors that can become darlings for formal capital. This is not an out-of-ordinary wish list because this is exactly what Sweden has done in the last three decades that allows it to offer Bioendev as a tutor to India.

Also read: Will India Need a Landfill the Size of Bengaluru By 2030?

Today, Sweden produces 4.3 million tonnes of garbage (nearly doubled) and recycles every bit of it. Not an iota of this garbage gets dumped in open landfills because they are banned and the entire waste of the country get supplied as a precious resource for its booming resource recovery industry. So, important has this industry become to Sweden that it now imports garbage from other countries to keep the wheels of this industry well-oiled and running.

One metric for India to chase is to emulate Sweden to address our issues of sanitation and pollution. Therefore, engagement with Bioendev even if it is as a tutor-student relationship is a necessary start. But the pursuit should be to develop our ability that can allow us to engage with Bioendev and other similar companies on the same framework that we deploy to engage with Saab and in this ability also lies our success in solving the issue of sanitation and pollution.

In that regard, perhaps the next Royal visit by the King and Queen of Sweden to India will more be a courtship for Sweden’s resource recovery industry than a teaching lesson.

Ankur Bisen is the author of Wasted: The Messy Story of Sanitation in India, A Manifesto for Change, recently published and released by Pan MacMillan India.