Although it's unclear what was discussed, the meeting comes days after China's two top banks said they would not fund the company's controversial coal mine in Australia. 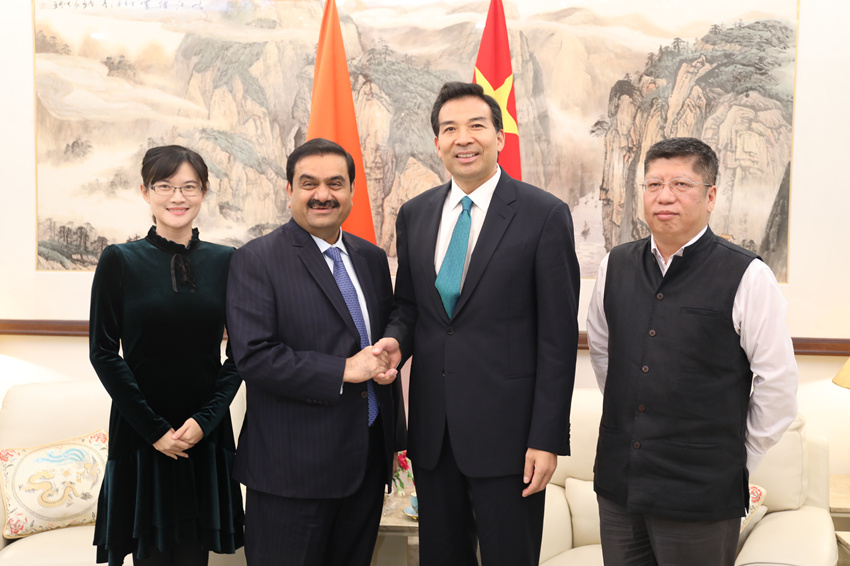 New Delhi: Adani group chairman Gautam Adani on December 6 met with Chinese ambassador to India Luo Zhaohui, days after it was reported that China’s two top banks said they had no plans to finance the company’s controversial coal mine in Australia.

Although it’s unclear what was discussed, the Chinese embassy’s website stated that they “exchanged views on strengthening economic and trade cooperation” between both countries.

“Ambassador Luo Zhaohui, Chinese ambassador to India, met with Gautam, chairman of the Adani Group in India at the embassy. Adani, (sic) exchanged views on strengthening economic and trade cooperation between China and India,” the Chinese version of the website (translated) stated.

The English version of the embassy’s website, as of Thursday evening, has not uploaded a similar notice documenting the meeting.

As per latest estimates, Adani Enterprises needs roughly $1.5 billion in financing by March 2018 for the first staged of its Carmichael coal mine in the state of Queensland.

Earlier this week, the Industrial and Commercial Bank of China (ICBC) and the China Construction Bank emphatically noted, in response to media reports stating otherwise, that they were not working on the coal project.

As The Wire has reported in the past, both Australian and overseas banks have been hesitant to grant loans, even as local environmentalists oppose the mine due to climate change and potential for damage to the Great Barrier Reef.

While it’s not clear if Adani was actually in talks with the banks that have issued statements – the conglomerate is primarily in negotiations with the state-owned China Machinery Engineering Corp (CMEC) for a loan – it has been reported that the CMEC deal could have roped in China Construction Bank, which has now ruled out any involvement.

While former Australian foreign minister Bob Carr told The Guardian that he had received confirmation “that no Chinese bank would be financing” the Carmichael project, well-known energy analyst Tim Buckley has noted that it was still very much possible for another Chinese bank to step in.

“At the end of the day, any one of these big Chinese banks could fund 100 percent of the project tomorrow if they wanted. They’re that big,” he told South China Morning Post.

The Adani group, like many Indian conglomerates, also has a history of doing business with Chinese companies. Over the last few years, it has signed a number of memorandum of understandings (MoUs) with Chinese businesses for manufacturing units that will produce everything from solar equipment to chemicals.

The Wire has sent a questionnaire to the Adani Group regarding the Chinese ambassador meeting and will update this story if and when a response is received.