Overcoming the problems of GST obstacles, a strong rupee and various trade facilitation needs will help our MSMEs occupy the space being vacated by China and other southeast Asian countries. 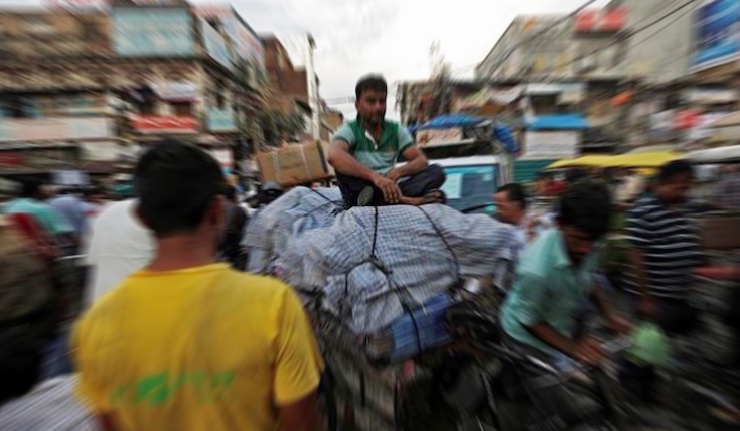 Medium and small enterprises should be at the centre of the foreign trade policy as they contribute a majority to our exports. Credit: Reuters

This is the second article in a series examining India’s export slump. Read the first here.

India’s gross domestic product (GDP) growth rate slowed to 5.7% in the April-June period of 2017-18 from 6.1% in the preceding quarter. This is the lowest in past three years. The main reasons for such slow growth are the lingering impact of demonetisation, de-stocking ahead of the Goods and Services Tax (GST) roll-out leading to slow manufacturing, and shrinking exports. Growth rates of manufacturing and exports were minus 3.12% and minus 9.62% respectively during the April-June period of 2017-18 over the preceding quarter.

These figures present a big challenge towards enhancing our exports and firming up India’s position in many of its current trade negotiations such as the India-EU free trade agreement, the Regional Comprehensive Economic Partnership for Asia and the Pacific. Though there are sector specific challenges to boost India’s exports, there are economy-wide challenges too.

Trade facilitation needs: Despite various initiatives, India stands well below than its peers in terms of trade facilitation. According to World Bank’s Doing Business Report (WBDBR), India’s “trading across border” rank has considerably declined from 126 in 2014 to 143 in 2016. Trade cost and time are significantly higher in India as compared to neighbouring competitors. In 2016, export and import time (including both documentary and compliance) in India were 144.5 hrs and 344.6 hrs, respectively, while cost to export and import (US$ per 20 containers) were 505 and 708.8, respectively.

Depreciating the rupee: Appreciating rupee has reduced the price competitiveness of Indian exports. Rupee has appreciated by 5.32% against the US dollar from January-July 2017 on a monthly average basis. While this helped in reducing our import bill, it has adversely affected the Indian exports. We need to depreciate (not devaluate) the rupee to enable our exporters to trade and create jobs. The RBI has to step into the market to either reduce the interest rate or buy up dollars.

Difficulties arising out of GST: GST was pronounced and sold as the largest tax reform in independent India and indeed might help the Indian economy grow in the coming years. However, it has posed a number of problems for our traders. Some of them are blockage of funds due to non-refund of input credits, non-inclusion of petroleum products and electricity under GST making their purchase costlier, procedural difficulties in its compliance, especially for MSMEs. Majority of the export promotion councils are demanding tax exemptions on exports.

Miscellaneous challenges: There are several other challenges such as declining global demand, high credit cost due to high interest rate, high logistic cost due to higher petroleum prices, tariff advantage to competitors such as Bangladesh due their LDC (least developed country) status, inappropriate labour laws having weak links between productivity and wages, lack of competitiveness due to non-compliance with quality standards.

A proposed basket of measures

In order to enhance our exports, we should have country-centric rather than area-centric strategy. This is because different countries in the same area may have varying import standards and procedures. Therefore, India needs to develop a comprehensive dataset of its trade transactions to prepare future policies.

In short, keeping these challenges in mind and in the wake of industry expectations from mid-term review of foreign trade policy, it is a challenging time for the commerce and industry minister of India to introduce a basket of measures for the growth of our exports. Some immediate actions may include the following:

Firstly, a comprehensive review of various export promotion schemes is required as not only GST has increased input cost for various manufacturing products but also it is a reality time for India’s commitments to the World Trade Organisation (WTO). Along with simplification of rules of origin provisions in our FTAs, the focus should be on research and development and raising standards of Indian products.

Secondly, medium and small enterprises should be at the centre of the foreign trade policy as they contribute a majority to our exports – in this regard, they should be incentivised in a WTO-compliant manner to grab the manufacturing space being vacated by China and other east and southeast asian countries. E-commerce is the key for future business – the foreign trade policy (FTP) should have a separate chapter on it, dealing with both on a business-to-business perspective, and business-to-consumer basis.

Thirdly, agricultural products are important constituent of Indian exports but there has been a steady decline in their exports during 2014-15 to 2016-17 – there should be a separate policy on enhancing agricultural trade. For reducing the time and cost of doing trade at the port level, all export-import transactions should be brought under the ‘Single Window Interface for Facilitating Trade.’

The authors work for CUTS International, a global think-tank on trade, regulations and governance.