Petronet to Invest $2.5 Billion in Tellurian Inc for 5 Million Tonnes of US LNG

India's largest LNG importer will invest in the Houston based energy major to negotiate the purchase of 5 million tons of gas per annum. 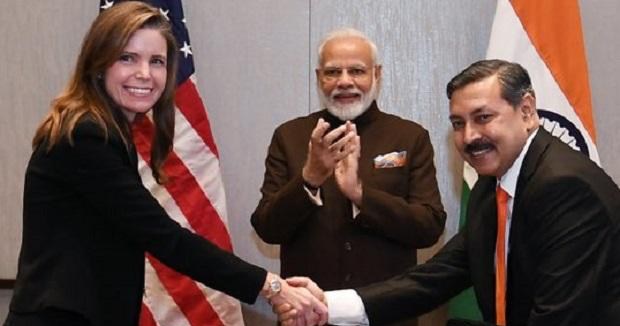 Signing of the MoU between Petronet and Tellurian. Photo @narendramodi/Twitter

The Houston-based Tellurian and Petronet LNG Ltd (PLL) signed an MOU on Saturday under which the Indian company and its affiliates will import 5 million tons of LNG from America over a 40-year period.

The agreement also includes PLL making investment in the equity of $28 billion Driftwood project in Louisiana to secure the LNG.

“On the sidelines, an MoU was signed between Tellurian, a Houston based energy major and Petronet LNG. Petronet will invest USD 2.5 billion in Tellurian’s proposed Driftwood LNG export terminal, in exchange for the rights to 5 million metric tons of LNG per year over 40 years,” Ministry of External Affairs said in a statement.

The Petronet deal, the largest by an Indian company in US LNG, came after Prime Minister Narendra Modi had a meeting with the CEOs of top US-based oil companies here on Saturday. Modi is set to address a crowd of more than 50,000 Indian-Americans at Houston’s NRG Stadium with President Donald Trump on Sunday.

“Petronet, India’s largest LNG importer, will be able to deliver clean, low-cost and reliable natural gas to India from Driftwood. Increasing natural gas use will enable India, currently the sixth-largest buyer of US LNG, to fuel its impressive economic growth to achieve Prime Minister Modi’s goal of a USD 5 trillion economy, while contributing to a cleaner environment,” Tellurian said in a statement.

Petronet will spend $2.5 billion for an 18% equity stake in the Driftwood LNG terminal – the largest outside holding so far in the project – and negotiate the purchase of 5 million tons of gas per annum, Gentle said.

US natural gas company Tellurian Inc. and Petronet LNG Limited (PLL) of India have signed an MoU, under which PLL and its affiliates intend to import up to five million tonnes per annum (5 mtpa) of liquefied natural gas (LNG) from America, the two companies announced on Saturday.

Tellurian and Petronet will endeavour to finalise the transaction agreements by March 31, 2020, they added.

The Driftwood project includes natural gas production, gathering, processing and transportation facilities, along with Driftwood LNG, a proposed 27.6 mtpa liquefaction export facility that will be located near Lake Charles, Louisiana on the US Gulf Coast.

In April, the US Federal Energy Regulatory Commission (FERC) issued the order granting authorisation for Driftwood LNG and the 96-mile Driftwood Pipeline, which will inter-connect the LNG terminal to the US natural gas market.

Under the MoU, Petronet and its affiliates intend to negotiate the purchase of up to 5 mtpa of LNG from Driftwood, concurrent with its equity investment, which remains subject to further due diligence and approval of its board of directors.