Outsourcing Industry Struggles With Work-From-Home Scenario Due to Lockdown

Many of the companies that provide business services such as call centres, information technology services, and business process automation were not prepared for work-for-home arrangements. 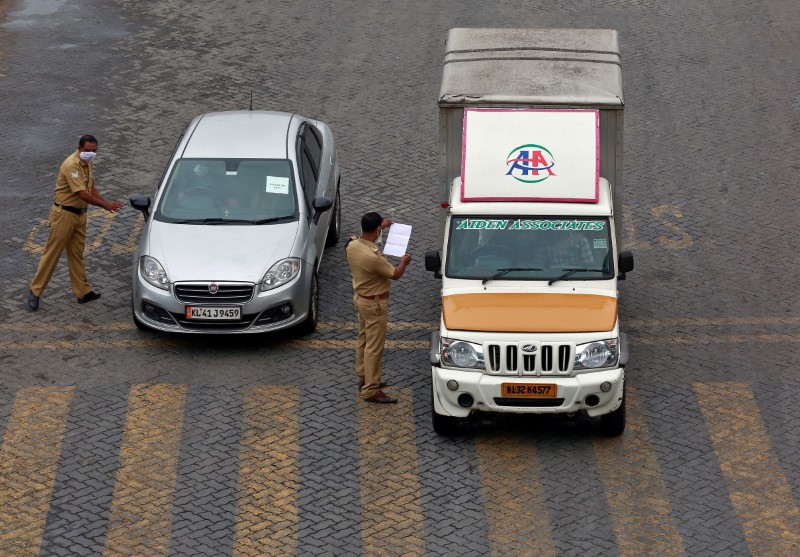 Police officers stop vehicles and check their papers on a highway during 21-day nationwide lockdown to limit the spreading of coronavirus disease (COVID-19), in Kochi, India, March 25, 2020. Photo: Reuters/Sivaram V

New Delhi/Bengaluru: As the coronavirus pandemic pushes India into lockdown, the call centres and IT services firms that function as the world’s back office are struggling to piece together work-from-home solutions and other business-continuity plans.

Prime Minister Narendra Modi on Tuesday ordered 1.3 billion Indians to stay at home for 21 days to stem the spread of SARS-CoV-2, following earlier lock-down orders in many Indian cities and states. As of Tuesday, India had reported over 500 cases of the virus and nine deaths.

Many of the companies that provide business services such as call centres, information technology services, and business process automation were not prepared for work-for-home arrangements, according to interviews with more than a dozen employees of several companies.

That raises questions about whether one of India’s showpiece industries can function smoothly amid the coronavirus crisis.

“The industry has been scrambling to set up its own business continuity plan,” said R. Chandrashekhar, a retired federal government official and a former president of India’s IT services lobby group, NASSCOM.

In the southern tech hub of Bengaluru, an employee working at a JPMorgan call centre said that until last Friday, her managers had repeatedly declined staffers’ pleas to work from home.

“Even if I am infected with the virus, I know the death rate for young people isn’t very high, but I am very very scared that I might transfer it to family,” she said on condition of anonymity, as she is not authorised to speak to the media.

After a state government order, JPMorgan on Sunday asked its Bengaluru staff to “stay at home until further notice,” according to a message to employees, reviewed by Reuters.

In some cases, companies must seek client permission before allowing employees to work on sensitive projects outside the office, a senior human resources executive at a top Indian IT firm said of working remotely.

“These days the challenge is not really the technology, the challenge is the regulations, and, in case something goes wrong, who’s going to take the responsibility,” the person said on condition of anonymity.

Three employees of mid-sized IT services firm Mphasis, in the western Indian city of Pune, said they were all being asked to come to the office until last Friday, even as some expressed concerns about working in close proximity with roughly 90 other people.

Maharashtra, where Pune is located, had imposed restrictions on private company employees going to offices in an effort to curb the spread of the virus. But it made exemptions for essential services including some IT companies.

During the past week, security guards barred employees from venturing outside one of the Mphasis offices in Pune to avoid attracting the police, fearing a forced shutdown, two employees said, declining to be named as they are not authorised to speak to the media.

One said a human resources executive told him not to wear a mask as it would “panic people who come to work”.

As Maharashtra enforced a curfew starting Monday, some Mphasis employees were being asked to remain home this week, even though they lacked equipment such as laptops, the employees said.

Mphasis said in a statement that not all of its staff were working remotely. But the company said it was speaking with clients and trying to enable as many people as possible to work from home while ensuring employee safety.

An employee of French teleservices provider Teleperformance on the outskirts of Delhi said his company had been reluctant to let staff work from home. But he said employees were finally told on Sunday that the company would begin installing corporate desktop computers at their homes after a wider lockdown in several cities.

JPMorgan and Teleperformance did not respond to requests for comment.

India’s home ministry, in guidelines issued on Tuesday, advised states to exempt essential IT and IT-enabled services from the national lockdown. NASSCOM, the lobbying group, said several states had listed IT and e-commerce among essential services that are exempt.