Mumbai: At least 33 companies, or one-third of firms on the Standard & Poor’s BSE 100 list, have fallen short of the required corporate social responsibility (CSR) spending as mandated by the Companies Act. The Ministry of Corporate Affairs (MCA) is sending out notices seeking details of how and on what CSR funds are being disbursed, say people familiar with the issue, adding officials want to check if corporate social work is actually happening. Minister of state (MoS) for corporate affairs, law and justice P Chaudhary recently commented publicly on CSR non-compliance by companies, indicating steps to check CSR spending would begin.

Abhishek Tripathi, director, CSR Advisory, PwC India, says companies have had the liberty of self-disclosure over the last four years, and there must have been gross violations and discrepancies for the notices to have been sent, but a part of the challenge, he says, is that in a lot of cases, too wide a range of activities can qualify as CSR.

For example, a company that makes its own products and then donates them to the needy requires third-party evaluation of the value of goods or services. Similarly, just giving funds to a non-governmental organisation is not being compliant either.

Arun Nanda, former executive director at the Mahindra Group who switched tracks in 2010 to focus on the social sector, says CSR has to come from the heart and not just be driven by regulations. “If you look not just at Mahindra & Mahindra’s (M&M’s) work but also at what the Tata Trusts have been doing, it started much before CSR became obligatory. If it is in your DNA, it is done with the right intent and the purpose is met.”

His point is that if it is done to satisfy regulations, there is the risk of the objective not being fulfilled. The Companies Act of 2013 laid out guidelines that required businesses to spend 2 per cent of their three-year average profits to help society in causes that range from healthcare and education to poverty, the environment and rural development.

The Mahindra group contributed 2 per cent of the average net profits of companies’ made during the three immediately preceding financial years. This financial year, 2017-18, too it will spend (budget) Rs 2.07 billion in CSR initiatives, says Rajeev Dubey, member of M&M’s group executive board, adding, “We have not received any notice from the MCA.”

“Only 0.01 per cent of the companies have CSR audited. However, they are beginning to maintain proper records of CSR spending,” she says.

Aside from record-keeping, most companies have increased spending, and Amit Tandon, managing director at proxy voting firm IiAS (Institutional Investor Advisory Services), says in 2016-17, the S&P BSE companies spent Rs 70.5 billion, an increase of 8 per cent, from the year before, which puts CSR spending at 98 per cent of the prescribed amount.

Based on the Act, the S&P BSE 100 companies were required to spend Rs 72.0 billion on CSR, and further disclosures regarding these spending will become more meaningful. “Put these numbers aside, the one compelling reason for getting the private sector involved in CSR is it will bring in some of the same rigour and discipline in their business activity as well,” says Tandon. The expectation is that they will focus on efficiency, measure outcomes, innovate, and fill gaps which the state itself may not otherwise be geared up to to pay attention to.

Harshbeena Zaveri, managing director of NRB Bearings, says, “I agree with the government requirement on CSR, but beyond the requirement for an audit, it should also make it mandatory to have a written policy cleared by a CSR committee that includes independent directors, which is what we have done.” 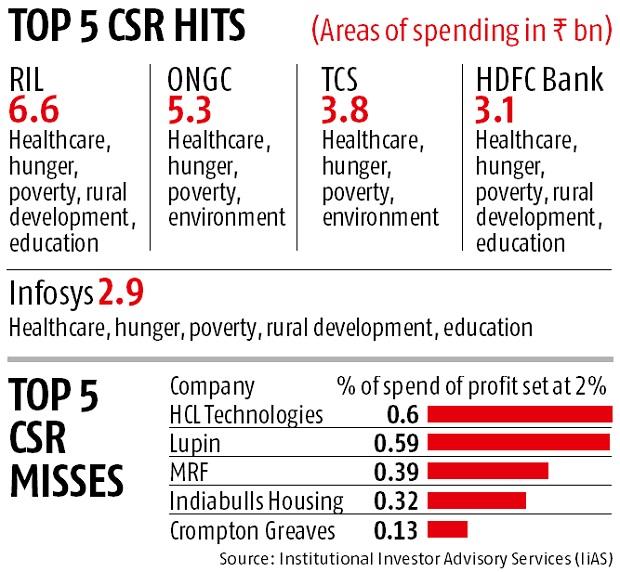 According to Tandon’s research, public sector undertakings met the 2 per cent target spending, but their actual spending at Rs 20.6 billion this year was lower by almost 14 per cent, following a 26 per cent decline in their three-year average profits. In contrast, the private sector had an average rate of 1.8 per cent and missed the 2 per cent target, but had an overall spending of Rs 47.3 billion.

Tripathi says this is a welcome initiative. “In fact, the government should make audits compulsory.” Beyond the financials, Tripathi says for CSR projects, audits need be conducted to ensure programme outcomes, and an assessment impact at the end of every project by independent agencies that understand the finer points of social development.

Sharad Abhyankar, a partner with law firm Khaitan & Co. who works on CSR matters, says CSR has a somewhat checkered history with the government having set up a high-level committee in 2015 to take a closer look whether it was being carried out as intended. At the time, industry at large had responded by offering takeaways on teething issues such as monetising a company’s own goods and services towards CSR and other tax-related deductions.

In 2016, the government began issuing show-cause notices to clients of Abhyankar’s, but no hearings have taken place since then. “The current spate of notices may be a fact-finding exercise, but the reality is that it has been five years since the law on CSR and there is no excuse to not have done it, and it is likely the government will take some action,” Abhyankar said.

With inputs from Veena Mani