“With sound political will, there is immense potential to transform the Line of Control into a line of commerce. Such a transformation can act as a driver of peace between India and Pakistan." 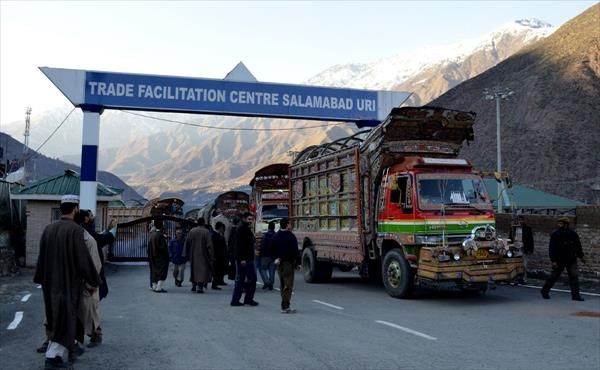 Srinagar: Even as trade across the line of control (LoC) through the Salamabad, Uri and Poonch routes completes nine years, it continues to be plagued by several issues that have in recent times slowed down business. Double taxation, the ripple effects of a hastily implemented Goods and Services Tax (GST) regime, frequent registration hassles – all of this and more has taken a toll on trade.

In recent times, National Investigation Agency (NIA) investigations have added to the strain of doing business, with about 40 cross LoC traders having received notices by the investigation agency and their offices and houses raided.

Cross LoC trade started in October 2008 as a confidence building measure (CBM) between India and Pakistan. It is conducted via Chakan-da-bagh-Rawalakot route in Jammu and the Salamabad-Chokoti route in Kashmir. Trade is done on 21 agreed items by the government via the Srinagar-Muzaffarabad and Poonch-Rawalakot routes. The Poonch route, however, was suspended earlier this year in July, resulting in an estimated loss of over Rs 60 crore to the traders.

“Now GST has affected our trade as well as about 12% GST is levied from our side when we export goods, and 5% is levied on imported items so it totals to about 17% GST tax on the trade now,” Hilal Turkie, president of the Salamabad Traders Association, told The Wire.

Turkie said although trade has been going on for the past nine years through the Salamabad-Uri route, various central governments over the years have not come up with a trading policy which could have streamlined business for the benefit of traders.

“We should have online registration by now which would help in better monitoring the trade as otherwise we are called by the concerned government agencies after every two to three months to thoroughly check our documents, bank details and other trade related antecedents,” he said.

As per official records, as on October 2017, there have been an export of goods worth Rs 2,535 crore and an import of goods totalling Rs 2,300 crore from the Pakistan-occupied side in the past nine years.

Traders say that in the past nine years, the local transport industry from the state involved in the trade has done business of about Rs 80 crore and about Rs 6.88 crore have been paid to daily labourers engaged in uploading and unloading of trucks for all the working days during this period.

“However, out of 3,285 days in the past nine years, LoC trade happened only for 1,150 days,” said Turkie. “This is very less trade in the past nine years when the percentage of the trade could have easily increased had the successive state and central government shown more interest to better facilitate this trade.”

Turkie said they’d also asked the government to extend the trade for six days a week. “Today, fingers are being pointed at LoC traders for all the wrong reasons. But fault lies with the system and the state government,” he said in a recent seminar held in Srinagar by the Jammu & Kashmir Joint Chamber of Commerce and Industries to commemorate the ninth anniversary of cross LoC trade. “We have asked for installation of a digital system that could monitor trade activity as we are in favour of regulation of this trade. Also asking for Rs 5 lakh security deposit from traders to be part of LoC trade is an illogical proposition.”

Asif Lone, the chairman of the Cross LoC Traders Union, said that traders are always at the receiving end and that they’ve have become a “victim of CBMs”. “While Omar Abdullah during his tenure as chief minister exempted sales tax but now present state finance minister has outrightly rejected such as exemption,” Lone said. “Instead of putting the entire onus on traders, it is the responsibility of the agencies scanning the goods to keep a check on illegal goods supply”.

Turkie pointed out that lack of banking mechanism which is not in place is also hampering trade. “The government needs to work out a banking mechanism involving two currencies which can further streamline the trade,” he said. “This time we are forced to rely only on goods for goods barter trade exchange, but if banking facilities are allowed, all our accounts can be maintained and easily checked and we won’t face many problems.”

Sagar D, sub-divisional Magistrate (SDM) at Uri and custodian of the trade facilitation centre at Salamabad, said that the government is taking initiatives to “reform this institution wherein registration process, single window system, e-governance mechanism between various agencies, restricted entry into trade facility centre and quarterly traders meet will be enhanced.” The SDM also added that the procurement of full body scanners will be completed in next two years.

The state government is now building a trade facilitation centre in Salamabad which is expected to be operational after a month. “This time the traders from Pakistan sometimes sleep in trucks if they’ve to stay on this side overnight,” said Bilal Ahmad Bhat, director, Industries and Commerce, Kashmir. “To avoid further pilferages we are also in the process of acquiring CCTV cameras whose cost will be borne by the central government.”

The director said till September this year there were 327 traders registered with them for the cross-LoC trade. He said a standing operating procedure (SOP) for the LoC trade came from the home affairs ministry in 2008 and a second one, with additional guidelines, was issued in 2013. Traders are required to strictly stick to the SOP for trade.

Ahmad said the cross LoC trade has also recently come under the radar of the NIA and other security agencies. This means there’s more work to be done in future to make the trade more foolproof and secure for the traders. “The latest trade modus operandi was implemented on the direction of SOP and additional guidelines came from the central government in September,” Ahmad says, adding that there’s some fear psychosis about this trade “since you are trading on the border and also there’s risk of cross border fire and shelling on the trade route”.

As per an official document sent from the home affairs ministry dated July 4, 2012 for compliance of all government authorities concerned with cross LoC trade, “POK drivers, at the time of entry into Indian side, shall make written declaration of money, SIM cards and other items in their possession/or on trucks, other than the declared goods being traded. Each driver of POK bus would be thoroughly checked at the LoC by the security agencies. On reaching the Trade Facilitation Centre, J&K police would ensure that POK drivers are kept in a sterilised zone, not allowed to mingle with traders, porters, other workers and staff and a discreet watch kept on their activities.”

Another guideline directs the concerned DC, “after scrutiny, may allow staying of POK truck driver for a night on our side in an emergency exigency, and ensure that such POK driver shall be sent back the following day. The physical scrutiny of the place of night halt half of such driver would be ensured. An officer would be designated for this purpose who shall be responsible for complying with the above directions.”

“Recently all traders had to then get clearances, police verification certificates, NOC and other verifications to avoid hawala transactions and illegal trade of items not on the 21 items list,” said Ahmad. “We had to ask the traders to deposit 5 lakh or get bank guarantee from this year to bring in more transparency in the trade since this year there were instances of illegal transport of heroin which was seized though the Uri route.”

A 2016 report titled ‘Trading Confidence: A Compelling Case for Cross Line of Control Trade’ brought out by economic research organisation Bureau of Research on Industry and Economic Fundamentals concluded that cross-LoC trade has played a “key role” in transforming a conflict-ridden region into an area with significant economic activity. “The trade has provided employment to former militants and youth of Jammu and Kashmir. Many erstwhile hostile districts like Uri and Muzaffarabad now witness a surge in different associated economic activities coupled with enthusiasm about cross-LoC products in the market. The trade has generated more stakeholders than some of the social security schemes applied in the state,” the report concluded.

“With sound political will, there is immense potential to transform the Line of Control into a line of commerce. Such a transformation can act as a driver of peace between India and Pakistan, who can then view Kashmir not as a subject of contention but as a subject of economic interest.”