With a nudge and push from the party in power, money that might be better spent on literacy, health and technology is funding pet projects at pet locations. 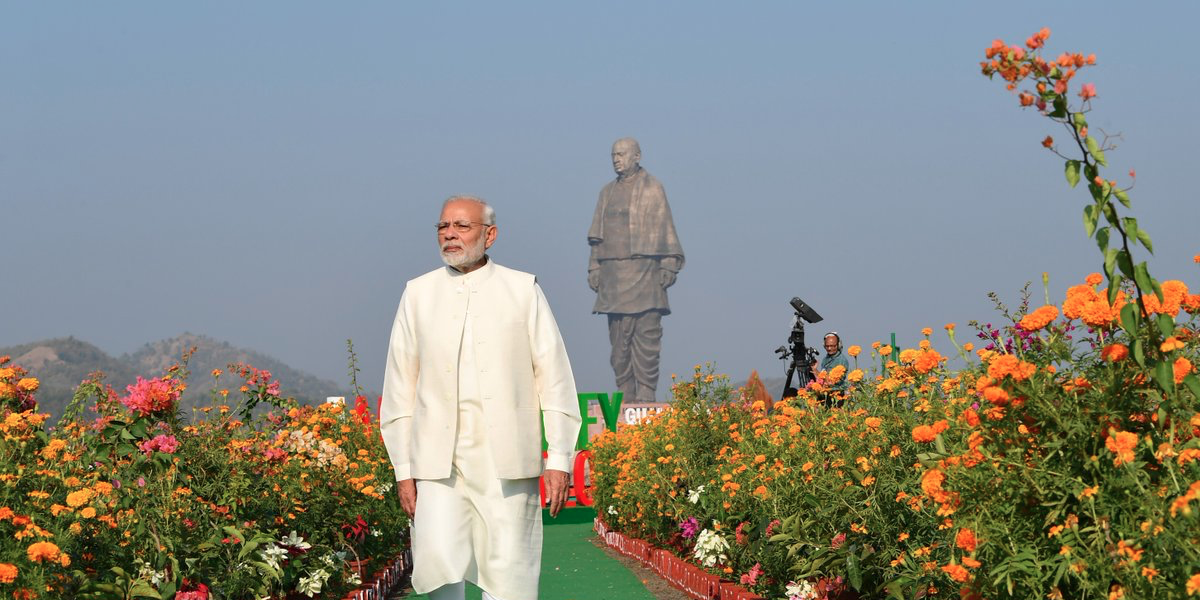 Five PSUs contributed a total of Rs 146.83 crore towards the construction of the ruling party’s pet project, the Statue of Unity. Credit: Twitter/BJP

While the steady increase in companies’ corporate social responsibility (CSR) spends since 2014 under the Companies Act is to be welcomed, a disaggregated look at the spending leads to the disturbing conclusion that CSR funds are becoming subject to political pressures.

In 2017-18, the mandatory CSR expenditure under Section 135 of the Companies Act was Rs 10,000 crore, according to the PRIME Database Group’s analysis of 1,627 NSE-listed companies.

This shows a growth of 11% per annum over the previous year. In line with previous years, and as was to be expected, the maximum spending was on education (Rs 38.31 billion) followed by health care, poverty and hunger (Rs 24.85 billion) and environment sustainability (Rs 11.82 billion).

But disaggregation of spending under some of the other categories  shows the emergence of spending which was not quite what was envisaged at the time the Act was amended to make firms allocate a small part of their profits to socially responsible expenditure. Indeed, the data seems to indicate that CSR funds are being seen as a milch cow for extra budgetary spending by the government, and as a tool for political signalling. Take the following instances.

In FY ’16, only Rs 46.51 crore was spent under the conservation of national heritage category, according to the data of 92 companies analysed by Goodera, a CSR and sustainability management platform. There was a sudden spurt in spending under this category to Rs 155.78 crore in FY ’17.

It does not require any leap of imagination to assume the public sector companies which coughed up money for the statue did so because they would have asked to do so by the Centre and the Gujarat government.

However, it is worth asking whether the money spent by these PSUs under the “CSR head” was even permissible, given the tight criteria outlined by the relevant provision of the Companies Act. Indeed, the Comptroller and Auditor General of India has observed, “Contribution towards this project did not qualify as CSR activity as per schedule VII of the Companies Act 2013 as it was not a heritage asset.”

The CAG’s report, tabled in parliament on August 7, 2018, has brought out serious irregularities in the use of CSR funds by the PSUs under the administrative control of the Ministry of Petroleum and Natural Gas.

A second instance of CSR funds being used to further the political goals of the party in power is in the category of animal welfare.

Numbers from the PRIME Database show that there have been 73 separate donations made by 41 listed firms  between 2014-15 and 2017-18 to cow-related activities or gau seva, mainly for running and maintenance of gaushalas. The donations range from a few thousand to millions. The contributions peaked in 2017-18, the number of companies making such donations being 28, including companies as disparate as Genus Power Infrasructure and finance company Paisalo Digital who have spent CSR funds ranging from Rs 1.17 million to Rs 19.5 million towards cow protection activities. The highest allocation for cow related activities was Rs 92.08 million in 2017-18.

Though Schedule VII of the Companies Act does mention animal welfare activities as one of the categories on which CSR money can be spent, the special focus on cow-related activities is new. It seems surprising that companies should see promotion of gaushalas as a concern which would lead to economic and social transformation of society.

Also read: An Adivasi Woman in Jharkhand Is Taking on the ‘Gau Rakshaks’ Who Killed Her Husband

This, at a time when reducing child mortality received no funding and eradicating extreme hunger and poverty received only 6% of the total CSR expenditure; and technology incubators which could have added to the employment potential and generation of income have also received minimum support at only Rs 0.38 billion in 2017-18, less than the Rs 0.40 billion received in 2016-17 .

Given that about 50% of children in India are malnourished due to pervasive poverty, and that new startups can bring innovations of long term benefit to society, one can only conclude that companies are cynically aligning their activities to suit the political concerns of the government of the day without any concern for the objective of the Act.

A third interesting development is the increase in giving to the Prime Minister’s Relief Fund (100% increase to Rs 1.72 billion) and the fall in spending on the Swachh Bharat Abhiyan (down 10% to Rs 5.2 billion) and cleaning the Ganga (47% fall to 0.8 billion.). Both of the latter were favourite categories till last year.

While the last two programmes, though government sponsored, at least had transformative potential, the increased giving to the PM’s Relief Fund shows a total lack of imagination and disinclination on the part of companies to exert themselves to do anything creative, in spite of the mushrooming of so called experts in CSR management.

Politics at play in choice of location

A final indication of CSR funds becoming a milch cow for the government is the geographical location of spending. The CAG found that most of the Central public sector enterprises spent the bulk of their CSR funds in states like Gujarat, Uttar Pradesh, Chhattisgarh, Odisha and Andhra Pradesh, states of political interest to the ruling party. The CAG points out that of the CSR expenditure of 77 CPSEs under 24 ministries, very little was concentrated on Punjab and northeastern states like Mizoram, Manipur, Nagaland and Sikkim. True, the bulk of the private sector companies’ CSR funds are also concentrated in the more progressive states of Maharashtra, Gujarat, Rajasthan and Tamil Nadu. But this is because large private companies are concentrated there, and companies typically like to spend around the location of their operations. But the locational spending by PSUs smells of political influence.

Though the idea of making companies partners in national development rather than being mere profit-making machines is laudable, what many suspected from the outset – that its intention was really taxation by the backdoor for extra budgetary support – seems to be proving correct. The corporate tax rate in India at 34.61% is already one of the highest, and increasing it any further would have invited a backlash. The compulsory 2% contribution to social development is, from the government’s point of view, an ideal way out – an extra source of funds for politically important projects.

Pushpa Sundar is the author of Business and Community: The Story of Corporate Social Responsibility in India (Sage).