Modi Had Demonetisation, Bank Transaction Tax Vetted as Far Back as 2013

The next stage of the ArthaKranti proposal is the introduction of a bank transaction tax – a taxation system that is not based on sound economic reasoning. 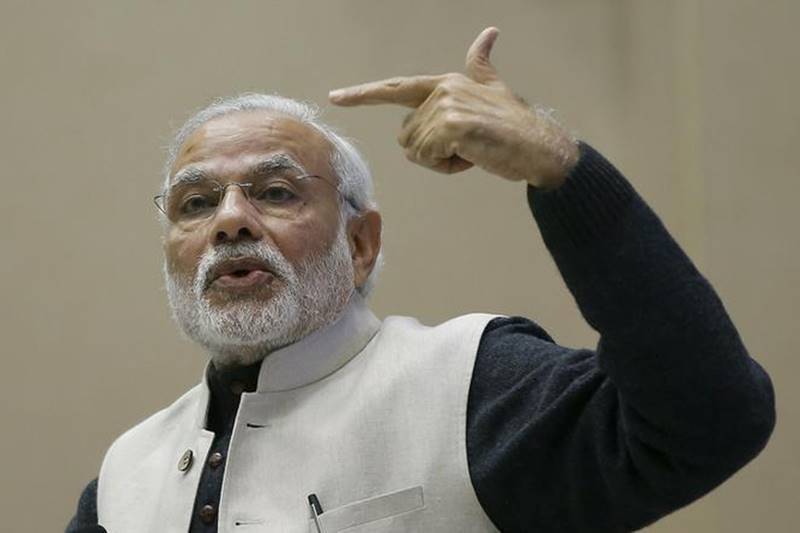 It’s September 18, 2013 and I’m in the chief minister’s office in Gandhinagar, Gujarat.  I wait expectantly amidst a stream of belated birthday wishers – it was the CM’s birthday on September 17th. As a tax economist, I was curious to meet a dynamic chief minister and a prime ministerial candidate of a leading national party.

Ushered in at a little after 12:30 pm, I am impressed not just by the massive black and white picture of a Gir lion that towers over the office from the stark wall behind the CM, but also by the humble manner and quiet, intelligent persona of the man who would be prime minister.  Having spent a good half hour in an engaging one-on-one conversation on a range of economic issues, I leave with a request: to meet a representative of ArthaKranti, an NGO, and provide feedback on their radical, revolutionary tax reform proposal to replace all taxes with a single bank transaction tax (BTT). Given India’s poorly developed banking sector and the low level of banking usage, the first step to achieving this would be to demonetise high value currency, thus forcing people into the banking sector.

I spend the next few days studying the ArthaKranti proposal and researching other similar ideas. I find that the ArthaKranti (AK) idea is not so unique after all.  In fact, it is an almost verbatim lift of a BTT proposal made by Marcos Cintra, Roberto Campos, and others, for Brazil in 1990. I write a note to the CM outlining various reasons why I believe this proposal should not be adopted in India.

Fast forward to November 8, 2016.  Demonetisation of 1,000 and 500 rupee notes is announced.  The first step of the AK proposal is implemented. We can only assume this means the next step – of replacing all taxes with a bank transaction tax – is also to be implemented. I hope the decision has not been taken. I certainly believe it should not be.  Here are my reasons.

There are three key issues:

First, a liquidity crunch caused by demonetisation.  The main idea of the AK proposal is that high value currency should be demonetised.  Of course, this has already happened and we are seeing the consequences.  Given the high rates of inflation in India which have lowered purchasing power significantly, even for ordinary day-to-day activities, every common man or woman needs sufficient cash.  India does not have a well-developed system of electronic or card payments, such as credit or debit cards.  In this context, the demonetisation of high-value currency, has led to a crushing liquidity crunch, which has frozen all economic activity.  Demonetisation of high value currency is a good idea, but it needed to be implemented very carefully in phases, and it had to be preceded by a strong increase in use of banking channels and card-based payment systems.  Another channel of payments that should have been encouraged to grow is mobile money – the use of mobile phones for payments.

Second, the basic requirement for the successful implementation of this tax is a very well developed, technologically sophisticated banking system.  India has a very long way to go before our banking system achieves that level of IT sophistication and technological competence. The proposed BTT is modeled on a proposal which was developed for Brazil.  Brazil does have a world class, highly developed, highly digitised, computerised banking system.  To quote, “Brazil’s current banking and payment systems are among the most modern known in the world, and this enables them to bring about such paradigm shift.”

While the AK-BTT paper accepts this fact, they do not offer any explanation as to how they believe this issue can be overcome.  They assume that by abolishing high-value currency and legal protection to cash transactions, the use of banking channels will grow very rapidly and sufficiently to make the BTT a success.  This assumption is not credible.

Third, the rate of a BTT which provides sufficient government revenues would inevitably be too high.  The AK-BTT model proposes a rate of BTT, i.e., 2% on each transaction, which in my calculation, may not turn out to be sufficient:   the proposal raises various questions, most notably about the ability to provide adequate revenues to government.  Their assumptions and calculations appear rather simplistic; it is a static analysis, does not assume any change in behavior; it is fair to assume that tax on bank transactions could actually disincentivise spread of and use of banking habits.

In Brazil, as per estimates by Marcos Cintra, for collecting revenues equal to 31.8% of GNP in Brazil (2002), the single BTT rate necessary would be 5.3%.  Now, in India, the total taxes collected by all arms of Government, are about 16% of GDP.  Hence, by the same calculation, the rate needed would be almost 2.7%.  In addition, India is running a general government fiscal deficit of almost 9%.

Thus, to collect enough revenue so that there is no fiscal deficit (a stated goal of the AK-BTT proposal) the amount of revenue collected must be 25% of GDP.  Now, the rate of BTT needed to secure tax revenues of the level of 25% of GDP, as per Cintra’s model, would be 4.2%.  This would be a very high rate for a bank transaction tax, given its universality and cumulative nature, and various other issues highlighted below.

Apart from these three critical issues, there are a number of other issues that need to be considered.

The BTT proposal fails to meet some basic criteria of sound economic principles.

For instance, tax policy plays an important role in influencing economic policy, not just raising revenues.  Income taxes help to redistribute incomes by progressive rates of taxation where the rich pay more than the poor.  As acknowledged in the AK-BTT paper, the BTT is at best, a proportional tax.  So, it does not help in achieving greater equity, a stated goal of our economic policies.

There are also inequity issues – salaried employees, who cannot avoid bank credits will be hit by the BTT, others will have opportunities to evade.  Even government welfare payments to poor, for example, old age pension, NREGA wages, etc., will be potentially taxed under the BTT as the proposal aims to tax all credits in a bank account.

A BTT tax also ignores indirect taxation on “demerit goods”, such as, alcohol, tobacco, fuels, and other socially costly activities, such as pollution (ecological taxes) is considered extremely important to regulate these activities and/or consumption of these goods.  A pure BTT regime does not envisage these taxes; and, if we do have specific taxes on these demerit goods, we begin to move away from a single BTT, and towards a multi-tax situation, similar to what we have now.  So, if at all we have a BTT, it will have to be supplemented by excises on ATF, plus wealth tax at central level, plus property taxes, plus other regulatory taxes, and of course, customs duties.

Finally, the BTT is a cumulative tax – it is on every credit, so each time a payment is made for a raw material, or a part, or a service, or any other input, there would be a tax of 4.2%* on the gross amount.  This, in a manufacturing industry, can cascade into very significant amounts of taxation, as there will be a tax on tax already paid.  The AK-BTT proposal does refer to this, but given their assumption of a 2% BTT rate, they say that the cumulative incidence will not be much more than a flat VAT or GST of 12%.

In some sectors, such as services, this cascading will not happen to that extent, as the number of inputs is less. This will mean a bias against manufacturing, something India can ill afford. Even a rate of 2%, while seems low, can be very high, depending on the profitability level.  For example, for someone with a profitability of 5%, the turnover tax of 2% amounts to a 40% tax on their profits**. Of course, with a higher rate for the BTT, such as 4%, which would be needed for sufficient revenues, the effective tax rate would be extremely high. There are also two other major points:

A BTT regime would also bring about, as with any other proposal, a number of implementation challenges.  The BTT would provide disincentives to poor people to open bank accounts and use bank channels, especially as all credits into bank accounts will be taxed, even government welfare payments.

On similar lines, if it is implemented in the current context of a highly underdeveloped banking sector, it would exclude vast chunks of the economy from taxation. Putting in place a BTT, especially one with a rate as high as 4% or so, would encourage other non-banking, non-cash financial transactions  – hundis, adhatiyas, barter deals, etc. to flourish.  This will defeat the very purpose of the BTT, as sufficient revenues would not be collectable.

What global implications would a BTT regime bring about? Firstly, India is a signatory to a number of double tax treaties.  It is important to note that the UN does not accept BTT as comparable to the traditional tax bases (income/wealth) which allow reciprocal compensation under international double taxation agreements.  So, with a single BTT, India will have to renegotiate all its treaties.

India is also a signatory to the “Global Forum on Transparency and Exchange of Information for Tax Purposes”, an international body which now has over 120 members.  Accepting the BTT will mean there will be no need for taxpayers/companies/firms to keep accounts as per the Global Forum standards and India would be unable to honor the commitments made under that agreement.  Consequently, India will be viewed as an “unsafe” investment destination.

In short, with demonetisation now in effect, let’s hope Modi’s economic revolution or “arth kranti” does not contemplate this next step.

(Rajul Awasthi is a former officer of the Indian Revenue Services and worked on tax administration. Views expressed here are personal. )

*As per the calculation in B above, to raise enough revenues to cover any fiscal deficit.