The plan, in like with Modi's 'Atmanirbhar Bharat' campaign, has been under review since at least April, according to a government document seen by Reuters. 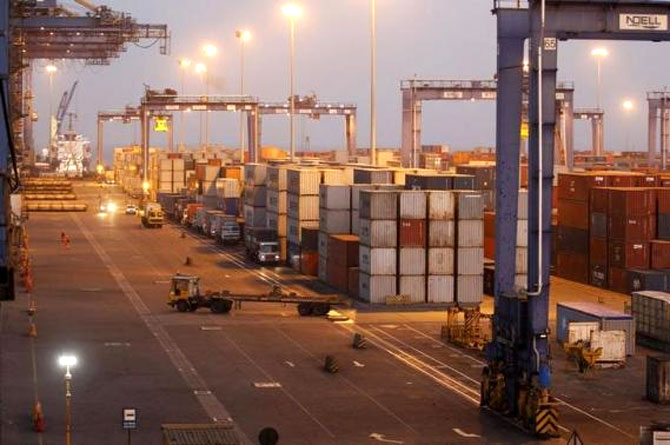 A general view of a container terminal is seen at Mundra Port in the western Indian state of Gujarat, India April 1, 2014. Photo: Reuters/Amit Dave/File Photo

New Delhi: India plans to impose higher trade barriers and raise import duties on around 300 products from China and elsewhere, two government officials said, as part of an effort to protect domestic businesses.

The plan has been under review since at least April, according to a government document seen by Reuters, and is in line with Prime Minister Narendra Modi’s recently announced self-reliance campaign to promote local products.

The new duty structures are likely to be gradually outlined over the next three months, said the sources, who asked not to be named as the plan is still being finalised.

India’s finance ministry and trade ministry, which is involved in the discussions, did not respond to requests for comment.

The government is considering raising import duties on 160-200 products and imposing non-tariff barriers – such as licensing requirements or stricter quality checks – on another 100, according to the officials.

The decision will target imports worth $8-10 billion with the aim of deterring non-essential lower quality imports which render Indian products uncompetitive, said the first official, who has direct knowledge of the plans.

“We are not targeting any country, but this is one of the ways to reduce a trade deficit that is lopsided with countries like China,” the second official said.

Bilateral trade between China and India was worth $88 billion in the fiscal year ending March 2019, with a trade deficit of $53.5 billion in China’s favour, the widest India has with any country.

Between April 2019 and February 2020, the latest data available, India’s trade deficit with China was $46.8 billion.

A separate industry source familiar with the matter said engineering goods, electronics and some medical equipment were among items being considered under the plan. A third government source said non-tariff barriers, such as more stringent quality control certification, could apply to imported products such as air conditioners.

Modi has vowed to promote and protect local manufacturing since he swept to power in 2014. He has promoted a “Make in India” programme in recent years, and last month announced an “Atmanirbhar Bharat”, or a self-reliant India, campaign.

India already raised taxes on imports of goods such as electronic items, toys and furniture in February, drawing criticism that it was a protectionist move against foreign businesses. Sweden’s IKEA, for example, said at the time it was disappointed with the higher tariffs.

The government document showed feedback had been sought from various Indian ministries to arrive at the list of around 300 products, which has not been seen by Reuters.

India has increased duties on more than 3,600 tariff lines covering products from sectors such as textiles and electronics since 2014, the document added.

“We’re pushing for a policy to strengthen Indian manufacturing keeping in view its strengthens and weaknesses,” a fourth government official said.