The victory of the Australian Labour Party – which has promised to veto a prospective Federal government to the Adani group – is bad news for the company.

A protester holds a sign as he participates in a national Day of Action against the Indian mining company Adani's planned coal mine project in north-east Australia, at Sydney's Bondi Beach in Australia, October 7, 2017. REUTERS/David Gray - RC1ECC878470 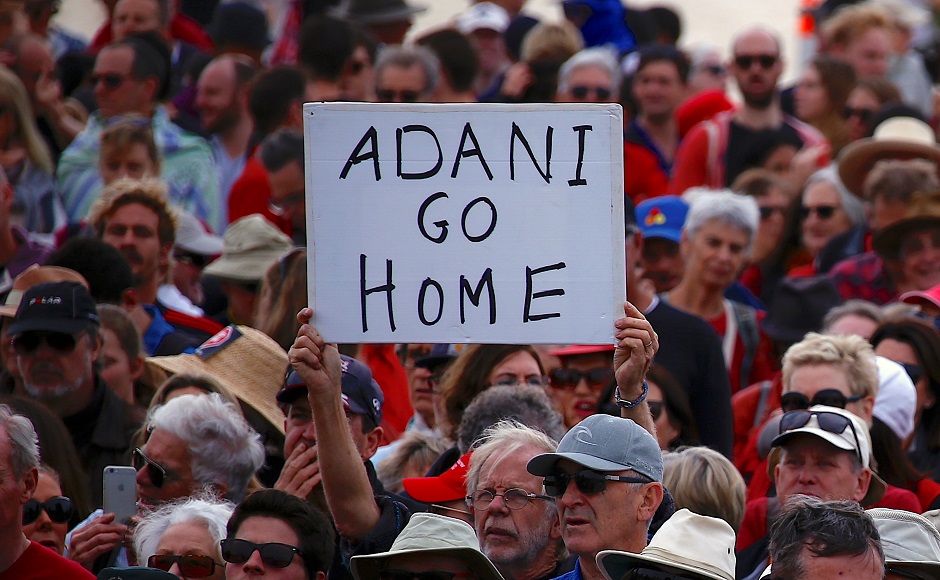 A protester holds a sign as he participates in a national Day of Action against the Indian mining company Adani’s planned coal mine project in north-east Australia, at Sydney’s Bondi Beach in Australia, October 7, 2017. Credit: Reuters/David Gray

The Adani group’s chances of getting a $900 million (AUD) concessional government loan — crucial to its Carmichael coal mine project — are approximating close to zero as the Australian Labour Party (ALP) is set to form the government in Queensland — the north-eastern Australian state home to the proposed Adani coal mine.

The ALP went into polls with the promise that they will veto the prospective Federal government loan to the Adani group, and that became the critical point of difference between the Liberal National Party (LNP) and the ALP — the two major parties that went head-to-head in the elections held on November 25.

The $900 million (AUD) loan with an interest rate lower than commercial lending rates and a repayment period longer than commercial lending periods would have reached the Adani group through the Federal government body, the Northern Australia Infrastructure Facility (NAIF). The tax-payer subsidised loan was being seen as a lifeline for the project which has huffed, puffed, but struggled to raise any finance as banks and financial institutions across the world have decided to stay away from the project due to the uncertainty around the global coal market and due to the project’s controversial nature.

Three weeks prior to polling, on November 4, leader of the ALP in the state and the sitting Premier of Queensland, Annastacia Palaszczuk, announced that her government will veto the prospective NAIF loan to the Adani group. The announcement came as a surprise as Palaszczuk had previously stood steadfastly behind the project even as the project faced massive public opposition.

ALP’s definitive stand ensured that the Adani loan issue — which was already one of the top-most elections issues — became the most significant talking point leading up to polling day. “It had always been a very significant issue. But, with the Premier’s decision to veto the loan, it became the most significant issue going into the elections as it became the point of difference between the two parties,” said Joshua Robertson, correspondent with the Australian Broadcasting Corporation (ABC) and earlier with the Guardian Australia, and someone who has covered the Adani mine project since 2014.

Various social organisations and activist groups have been protesting and lobbying against the Adani coal mine for the last three years with the protests gathering momentum in the last few months as the organisations came together under the ‘Stop Adani’ alliance, which, like its name, used uncomplicated messaging to try and convince the Australian people that the Adani coal mine would do more harm than good.

Also read: Adani’s Australia Story: What’s the Fuss All About?

“It has been a very smart and effective campaign. People across the country have become more opposed to the mine and I don’t think anyone wants to see tax-payer’s money given to a billionaire,” said Paul Williams, senior lecturer in politics at Griffith University in Queensland.

On October 4, a month prior to ALP’s announcement that it would veto the NAIF loan, a survey of 2,194 residents across Australia was conducted and the results showed that 55.6% of those surveyed were opposed to the Adani coal mine. When asked if the Queensland government should veto the Federal government loan to Adani, 65.8% of the respondents said yes.

“The public opinion and the campaign against the mine caught up with the Labour party (ALP). We have been tirelessly campaigning against the mine for the last two-three years, and politicians sooner-or-later had to bow down to public opinion. That’s what happened with the ALP’s veto announcement,” Sam Regester, campaigns director at GetUp, an activist group part of the ‘Stop Adani’ alliance, told me in a phone conversation.

As growing public opinion against the Adani coal mine cajoled the ALP into saying no to the NAIF loan, the mine’s dependence on the subsidised loan grew. As many as 24 Australian and international banks either refused to fund the project or introduced rules that would make the Carmichael project out-of-bounds for them. The options that remained for Adani to finance the project such as Chinese state owned enterprises — which the Adani group had approached — also depended on the explicit endorsement of the project by the Australian government in the form of the NAIF loan. “I don’t think the Chinese state owned enterprise would even contemplate doing a project in Australia without an explicit endorsement of the project by the Australian government. And there is nothing more explicit than being a key funder. If the Chinese knew that the NAIF wasn’t available, I don’t think they would even give it a moment’s thought. It is too controversial a project,” Tim Buckley, Director of Energy Finance Studies, Australasia, within the Institute for Energy Economics and Financial Analysis (IEEFA), a pro-renewables energy research firm, told me in October.

After losing out on the NAIF loan, there was more bad news for the Adani group as Buckley’s words turned prophetic, and Chinese banks started distancing themselves from the project, almost on cue, as results of the Queensland elections started trickling in and it appeared certain that the ALP would form the government in Queensland meaning that there would be no Federal government NAIF loan for the Adani project.

Between December 1 and December 5, three Chinese banks publicly stated that they will not be financing the Adani coal mine project. These banks include some of the biggest banks in the world — Industrial & Commercial Bank of China, China Construction Bank, and Bank of China.

Julien Vincent, executive director of the environmental campaign group, Market Forces, explains how the result of the Queensland election influenced the decision of the Chinese banks. “It straightaway meant the loss of 1 billion Australian dollars as the ALP would veto the loan. It also heightened the risk profile of the project because the NAIF loan would have come at an extremely low rate of interest and with heavily subordinated repayment terms. Therefore, it made the project even more risky from the point of view of any potential investor,” he said.

The changing contours of the politics around the mine symbolised by the November 4 announcement of the ALP leader in Queensland, Annastacia Palaszczuk, also meant that the Adani group no longer had the political support across major parties that it earlier enjoyed. The ALP had taken a decisive stand on the issue of the NAIF loan going into elections, even as the LNP criticised the decision arguing that it meant that regional Queenslanders would be deprived of jobs that the Adani coal mine would bring.

With the electorate voting decisively in favour of the ALP, their stand on the loan issue was vindicated, and it is likely now that their stand will solidify at a national level as well against the Adani mine. “The veto announcement definitely enhanced the credibility of the ALP in Queensland and the results have shown that. This result will also now mean that nationally the ALP’s stand against the mine will harden,” said Williams.

The ALP’s win in Queensland and the resultant veto on the NAIF loan, therefore, had two negative fallouts for the Adani group’s prospects of raising finance for the project. One, it raised the risk profile of the project as the $900 million (AUD) that the NAIF would have provided at a concessional rate of interest and on easy repayment terms, would now potentially have to be raised at non-concessional market rates of interest and with commercial repayment terms. And two, the public backing of the ALP’s stand on the Adani-NAIF loan issue seen by way of the win in the Queensland elections meant that the ALP would be encouraged to take a stronger stance against the mine itself, meaning that the political support for the Adani coal mine stood diluted.

In addition to the changing political scenario and growing financial complications for the Adani coal mine, eminent Australians have also been lobbying with Chinese political and financial leaders to ensure that the mine is not funded by any Chinese enterprise. Former Australian foreign minister, Bob Carr, and millionaire businessman turned conservationist, Geoffrey Cousins, have been meeting with Chinese bank officials and political leaders in China and Australia to dissuade them from providing any form of credit to the Adani group for the project.

“We put our case to them that the Adani mine wasn’t a project that should be funded for financial and environmental reasons. They told me that no funding could be offered to Adani without approval from the government,” Cousins told me via email.

Subsequently, on December 5, Cousins received an email from the Chinese embassy stating that no Chinese banking institution or ‘entity’ was looking to fund the project. “Beijing has taken note of your concern. It is learned that certain Chinese entity was approached by Adani group for initial phase communication on the Carmicheal coal project, but without conclusion of any binding agreement for cooperation. Due to the absence of commercial feasibility, the Chinese entity concerned has terminated the negotiation process, and no Chinese banking institution has made any financing commitment to the project,” the email read.

It is widely believed that the Chinese entity that the email mentioned was the Chinese state-owned enterprise, China Machinery Engineering Corporation (CMEC), which the Adani group had approached for financing. According to a press release (which has now been removed) on the website of CMEC, in January, a top Adani Mining Private limited executive, Praveen Khandelwal, along with the CEO of Downer EDI group – a company which has a $2 billion contract with Adani Mining Private limited for the construction of the mine in Australia – met with the president of CMEC, Zhang Chun. Chun said at the meeting that the CMEC “hoped to cooperate with Adani and Downer to take part in financing, construction and operation of relevant coal mines and railway projects”.

With any form of Chinese funding looking increasingly unlikely, particularly as China responds to the dwindling political support for the mine in Australia, the Adani group’s prospects on its flagship mutli billion-dollar investment in Australia look grim. “Political sources are also saying no China involvement in the Carmichael project is going to happen. It will be a huge challenge now for Adani to raise finance,” said Buckley.

Cousins is more emphatic, “This project is now dead.”

On December 6, Adani group chairman, Gautam Adani, met with Chinese ambassador to India Luo Zhaohui. A short statement on the Chinese embassy website stated that “they (Zhaohui and Adani) exchanged views on strengthening economic and trade cooperation between China and India”. The exact contents of what was discussed remain unknown. However, given the goings on vis-à-vis Chinese funding for Adani’s Australia project, the meeting has fuelled speculation.

“They (Adani group) are certainly going to try hard to revive the project. But, the events of the last one month have been dramatic and have put us (Stop Adani alliance) on the path to victory. But, we are also careful to not celebrate too early. We will now demand that the Federal government cancel the mining leases of the Adani group. We will not rest till the project is officially dead”, said Regester.

A questionnaire has been sent to the Adani group. This story will be updated if and when a response is received.