How long will we continue to pay the price for such cronyism, phone banking, perpetual bungling and failed regulation? Jet Airways, once India’s biggest airline, has been grounded, leaving the lives of nearly 20,000 employees and lakhs of customers in disarray. Employees haven’t been paid since December-January. Customers find their holidays in chaos; funds blocked in refunds; while they are forced to book again at steep rates, to salvage hotel bookings. All the while, the civil aviation ministry has fiddled. Well, it apparently held meetings and issued ineffectual advisories asking other airlines not to hike fares.

Naresh Goyal, the man responsible for the airline’s stupendous success, is also responsible for its massive failure. We can dissect his scheming ways and refusal to let go of the failing venture to the point that his ‘beloved airline’ has been grounded. But the buck for the mismanagement of Indian aviation really stops at the civil aviation ministry and banks.

Since 1991, when India reopened its skies to private airlines, successive governments have viewed civil aviation as a ‘malaidar’ portfolio, in the evocative words of imprisoned Bihar leader Lalu Prasad Yadav. It led to ad hoc policies to benefit crony capitalists in collusion with ministers and bureaucrats.

Consequently, India has been one huge graveyard of airline firms – Damania, ModiLuft, East-West Airlines, Sahara Airlines, Air Deccan, Kingfisher Airlines and, now, Jet Airways are the prominent ones that come to mind. Many of these entrepreneurs had suspect antecedents – one headed a group of chronic defaulters, another was eventually shot dead in an underworld hit.

Sahara Airlines and Air Deccan were purchased by Jet Airways and Kingfisher Airlines, respectively. They are examples of how bankers, usually from public sector banks (PSBs), ever amenable to political pressure and manipulation, fund these misadventures and allow outstanding loans to balloon.

Those interested in the details of this sordid rent-seeking should read a book by investigative journalist Josy Joseph, called A Feast of Vultures published in December 2016. The book is available online, despite Goyal intimidating the writer with a Rs 1,000-crore defamation case. The book records an Intelligence Bureau report of December 2001 about Naresh Goyal’s links to underworld dons Dawood Ibrahim and Chhota Shakeel and his sources of funding.

Isn’t it extraordinary that banks and their regulator – Reserve Bank of India (RBI) – didn’t bother to investigate the charges or take the precaution of having a director on Jet Airways’ board to keep tabs on its operations? Instead, Jet Airways, a listed entity, functioned like a mom & pop shop, with Naresh Goyal, his wife Anita and son Nivaan running the show and influencing key bureaucrats and ministers to repeatedly swing policies in their favour.

A senior bureaucrat, who bore the brunt of Goyal’s machinations, calls him an ‘ace manipulator’. Jitendra Bhargava, aviation expert and powerful whistleblower, calls him a product of ‘crony capitalism’ and documents how the civil aviation policy was repeatedly tweaked to favour Jet Airways.

Successive governments allowed a flip-flop in foreign shareholding rules, sometimes to keep out his competitors and, at others, to allow him to bring in foreign investors. Permission for domestic airlines to fly abroad was manipulated to ensure that only Jet Airways, initially, qualified to fly abroad. The policy was also announced on the eve of its initial public offering (IPO). 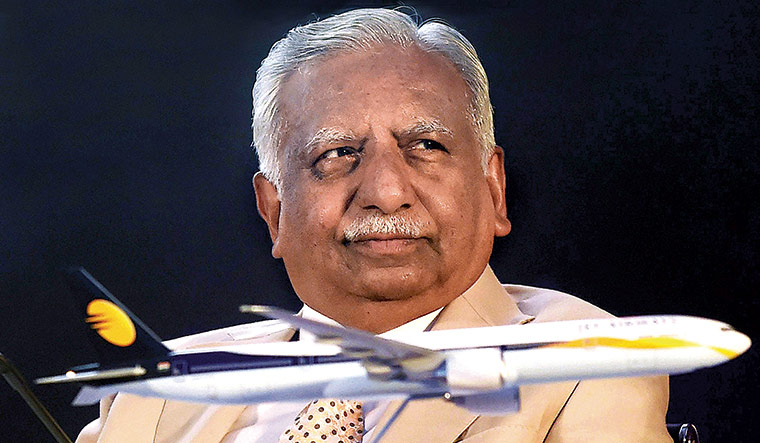 When Etihad Airways invested 24% in Jet, Goyal ensured that it got to fly 50,000 additional seats into India in return for a bigger premium per share. In effect, national assets were bartered on behalf of a private airline. At the end of these manipulations, we have a failed airline that will leave a large blotch of red in the books of PSBs.

This will, eventually, be written off and the hole in their books filled by with a dole from the exchequer at public cost. Although Prime Minister Narendra Modi lampoons ‘phone banking’, surely the phones were working overtime to ensure that lenders avoided the bankruptcy route for Jet Airways.

In all this, let’s not forget the big elephant in the room that was ignored with great determination by our politician-bureaucrat-crony cabal. For over 20 years, aviation policy was being bent and twisted to keep out the Tatas who were the most qualified corporate house to enter the sector.

Air India, set up by JRD Tata and one of the best airlines in the world, was brutally nationalised. After a few years, JRD was removed as chairman. Both, JRD and Ratan Tata have been passionate about aviation; but, instead of laying out the red carpet for this group which had the experience, reputation and deep pockets, licences were given to everyone but them.

Last evening, after having brought the airline to a halt, lenders continued to cover up the extent of the debacle that, just a week ago, was being trumpeted as a coup by State Bank of India’s (SBI) chairman Rajnish Kumar. A press note, issued late in the evening on April 17, says that banks are ‘reasonably hopeful’ that the bidders who have submitted an expression of interest will be ‘successful’ in ‘determining the fair value of the enterprise in a transparent manner’.

Another statement from the Jet Airways’ management held out the hope that a deal will be struck by May 10 which could possibly help revive the airline. Even if there is a deal, it is fairly safe to bet that it will leave banks with big losses and the outcome will be vastly different from the one trumpeted by the SBI chairman just last week.

Meanwhile, all the key stakeholders – employees, customers and shareholders – are in the dark about why the deal failed and the exact reason why some lenders refused to play ball and provide emergency funding to keep the airline afloat until new bidders were found. We are also clueless about whether all the announcements to the stock exchanges are nullified by the lenders’ refusal to provide the promised emergency funding.

Has the conversion of one rupee of debt into 50.5% equity also been dropped? If so, does it mean that the status quo is maintained over the shareholding of Naresh Goyal’s family (50.5%) and Etihad Airways (25%) when a new deal is hammered out? What is the legal sanctity of this? All this ought to have been clarified to the stock exchanges in a transparent manner; but, apparently, banks and Jet Airways are above such disclosures.

I have emailed the SBI for answers since neither the lenders’ statement nor that from Jet Airways provides any clarity. The Bombay Stock Exchange’s (BSE’s) website, however, shows that the capital structure has not changed and Goyal’s holding remains intact. We learn that only 31% of these shares are pledged. Isn’t it worth asking why PSBs have failed to ensure that his entire shareholding was pledged when they lent so much money to the company?

Also Read: What Needs to be Done to Keep Jet Airways in the Skies?

The only positive outcome is that the brazen attempt to permit Naresh Goyal to bid for the airline, within a week after the deal, was dropped after Etihad Airways and TPG Partners threatened to walk out. The disastrous optics of such a move, when elections are in progress, may have also made a difference.

As things stand, the possible bidders are: Etihad Airways, TPG Capital, Indigo Partners and the National Investment and Infrastructure Fund (NIIF). Of these, the last is a quasi-sovereign fund set up by the Indian government to provide long-term infrastructure funding. If it emerges as a successful bidder, shouldn’t we see it as backdoor nationalisation – effectively a socialisation of losses?

Meanwhile, there is another irony: Vijay Mallya, who faces extradition to India, has been repeatedly tweeting to taunt our banks and asking them why they are refusing to take his money. “I have offered to pay back 100% but am being criminally charged instead. Airline Karma?” tweeted Mallya.

The question is pertinent. We, too, would really like to know why banks are not taking his money and why his financial obligation cannot be separated from the criminality of his actions, if any, such as the money laundering that he is facing.

All this only smacks of confused policymaking and economic bungling that hurts employees, shareholders, customers and taxpayers. How long will we continue to pay the price for such cronyism, phone banking, perpetual bungling and failed regulation?

This article was first published on Moneylife. Read the original here.