High courts across India have repeatedly used blocking injunctions as a blunt tool to fight piracy. But as a result, the people's right to access the internet is being severely curtailed. 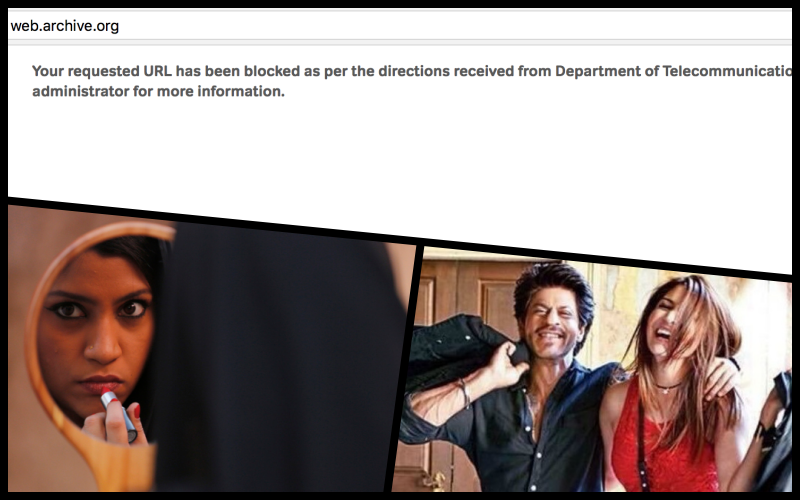 Any person attempting to access any of the specified websites now gets a message stating that the website has been blocked as per the directions of the Department of Telecom, government of India (which is incorrect, as the blocking has taken place pursuant to a court order, not a government direction).

In yet another instance of over-broad and disproportionate online censorship, the Madras high court has ordered 2,650 entire websites to be blocked nation-wide, as an interim measure against the infringement of copyright of certain films. On July 21 and August 2, the Madras high court ordered an interim injunction against several Internet Service Providers (ISPs), in a case of copyright infringement, directing the ISPs to disable access to websites upon the plaintiff’s request, including, perplexingly, the Internet Archive, an online library of public domain works, which also hosts an archive of more than 20 years of the World Wide Web.

Any person attempting to access any of the specified websites now gets a message stating that the website has been blocked as per the directions of the government of India’s Department of Telecom (which is incorrect, as the blocking has taken place pursuant to a court order, not a government direction).

The suits for copyright infringement have been filed by Prakash Jha Films, for Lipstick Under My Burkha, as well as by Red Chillies Entertainment, for When Harry Met Sejal. While the orders are not available from the Madras high court online portal, Medianama was able to obtain copies, which are available here and here.

This is not the first time that courts in India have enjoined ISPs in a quest to thwart online piracy. The Delhi, Madras and Bombay high courts have repeatedly used such ‘blocking injunctions’ as a blunt tool in their arsenal for fighting piracy. However, in the back and forth between the rights holder and the ISP or the infringer, the right of the public to access the internet is being severely curtailed, without courts not giving much thought to the manner in which their orders are carried out, or whether they are necessary or proportionate.

Ashok Kumar in the Bollywood hall of infamy

The orders, which are largely identical, direct 37 ISPs to ‘restrain from infringing’ the films and to block the list of 2,650(!) websites provided by the plaintiffs, upon receiving notice of such websites from the producers/film studios. The order also operates against cable operators as well as certain unknown defendants, impleaded by the court as ‘Ashok Kumar’.

An ‘Ashok Kumar’ or a ‘John Doe’ order is an order in a suit brought against unknown and unnamed defendants, to counter the possibility that someone, somewhere, may possibly be infringing upon the rights of the plaintiff. Ashok Kumar orders have become the go-to tool for overzealous plaintiffs seeking copyright protection from the court with respect to online infringement, by claiming difficulties in identifying the infringing parties. There are several problems with the order of the Madras high court, which are common to most such Ashok Kumar orders issued by courts in India.

The orders appear to have been passed ex parte, without any of the defendants haven been given a hearing or the chance to put forward their defence. Such orders should only be passed in highly exigent circumstances and must follow guidelines issued by the Supreme Court. However, the order does not give any details as to why such an order was passed ex parte, not only against the unknown defendants, but against the ISPs as well.

Standards for injunction not satisfied

The orders do not specify at all whether the standards for issuing an injunction are satisfied, namely, the plaintiff must have made a prima facie case, with some evidence of infringement, the balance of convenience must be in favour of blocking the websites as against the interest in keeping them accessible, and the plaintiff must show irreparable injury arising from the infringement. However, the orders do not make any such determination, instead proceeding simply on the basis of the plaintiff’s claim.

The orders direct ISPs to block entire websites, instead of specific, identified URLs. The requirement to specify infringing works while issuing a blocking injunction has been noted both by the Bombay high court as well as by the Madras high court. However, the present orders pay no heed to this. Further, the orders direct ISPs to block websites which host content ‘relating’ to the plaintiff’s copyrighted material. As far as I am aware, a plaintiff only has specified statutory rights under Section 51 of the Copyright Act and cannot claim any cause of action against any content ‘relating to’ their works. The Internet Archive being blocked is a good example of the over-breadth of the orders. The archive does not host video content which is not in the public domain, but only captures HTML web pages as part of an archiving process. It is difficult to identify any claim which the plaintiffs can have in respect of copyright in their films against the archiving of web pages

Despite the practice of issuing Ashok Kumar orders having been adopted by courts in India as early as 2003, the legal basis for directing ISPs under this order is unclear. The Copyright Act, 1957, in Section 52(1)(b), clearly exempts ‘mere conduits’ (which includes ISPs), which provide internet access, from liability in respect of any infringement. Therefore, the ISPs themselves cannot be held liable for infringement of the films. However, the courts still possess the inherent power, under Section 151 the Code of Civil Procedure, to make such orders requiring the assistance of third parties to ensure the efficacy of their order. The Court of Appeal in the UK recently confirmed the inherent power of UK courts to issue directions to ISPs who are not actual defendants. However, there is no jurisprudence on the specific issue in India, which leaves us guessing (in some trepidation) as to the scope of this power.

The trend of wantonly issuing directions against ISPs and making them liable or responsible for removing infringing works has the potential to severely curtain access to online content. Most ISPs are private, for-profit corporations, whose course of action is necessarily the one entailing least economic costs. As such, ISPs already have more of an incentive to be over-broad in their compliance with copyright law, to avoid any possibility of liability accruing on themselves. In this scenario, ISPs are unlikely to put up much of a defence against court orders requiring them to block access to online content and services.

The plaintiffs in these cases, the rights holders, similarly have an incentive to obtain as broad an injunction as possible (although it is disappointing that the producers of Lipstick under my Burkha, after a massive publicity campaign against censorship, did not choose to be more cautious in asking for online censorship). The biggest impact of such orders is on the users of online services – for example, the author of a legal work whose creation is removed or the users trying to access a website that hosts legal content. Unfortunately, as these orders show, the courts charged with protecting the interests of the online community do not seem to take into account the aspect of public interest involved in being judicious with the use of a power to curtail internet access.

This article was originally published on SpicyIP and has been republished here with permission.